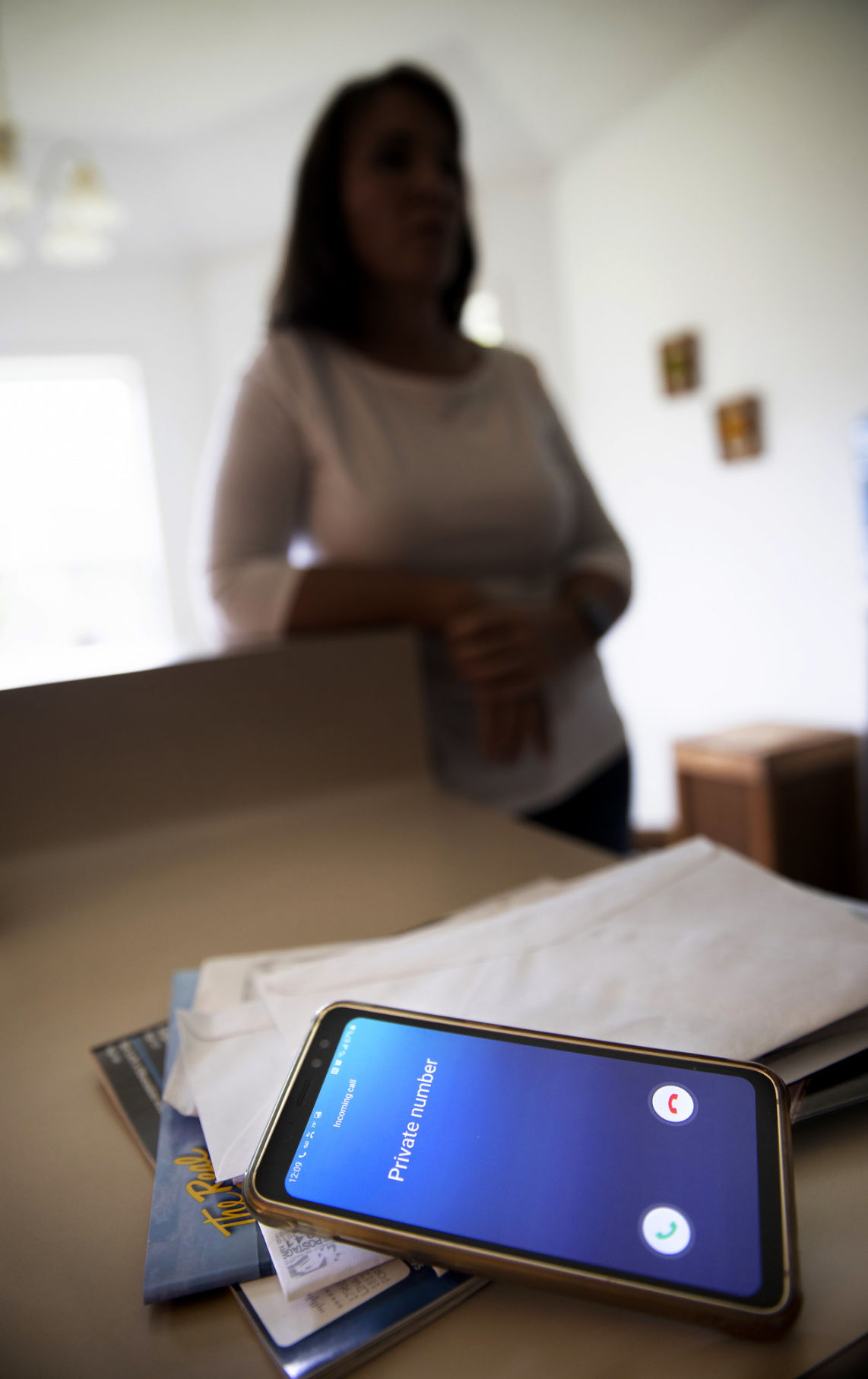 A Port Lavaca woman claims she is one of the women stalked by Sergio Carlos Padron, 19, of Calhoun County. The women said their concerns about the harassment went unaddressed by Calhoun County District Attorney Dan Heard. 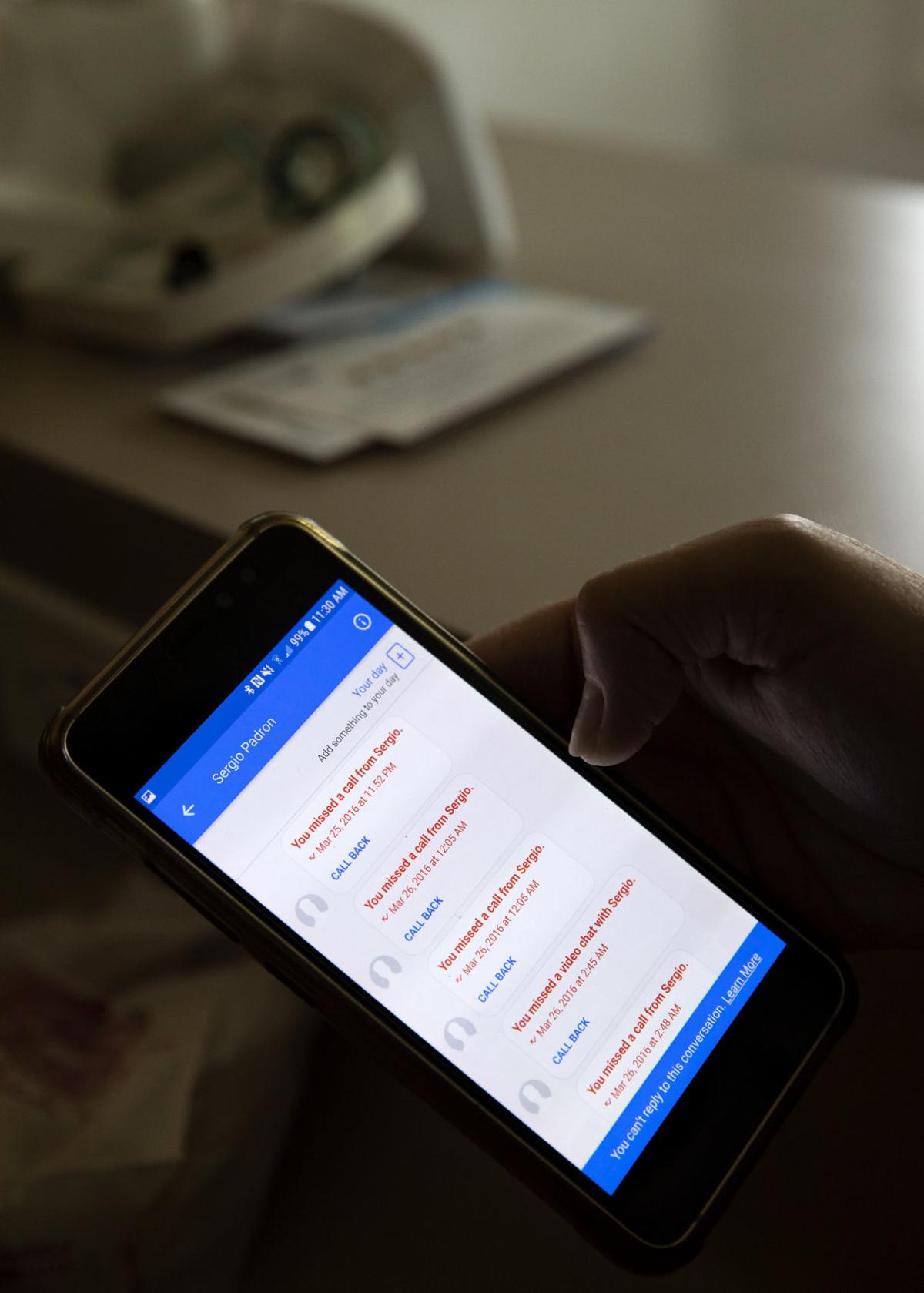 Sergio Carlos Padron, 19, of Calhoun County allegedly harassed a Port Lavaca woman for several years. After several attempts on her part to stop the phone calls and messages, she blocked his number.

A Port Lavaca woman claims she is one of the women stalked by Sergio Carlos Padron, 19, of Calhoun County. The women said their concerns about the harassment went unaddressed by Calhoun County District Attorney Dan Heard.

Sergio Carlos Padron, 19, of Calhoun County allegedly harassed a Port Lavaca woman for several years. After several attempts on her part to stop the phone calls and messages, she blocked his number.

PORT LAVACA – Sometimes the calls came in the dead of night.

Sometimes the calls – several times a week or more – came when the women were at work.

“I was disgusted and embarrassed,” a Crossroads woman said. “I felt gross – violated.”

For months, a Crossroads woman was the victim of harassing, sexual phone calls that came at least several times each week. Even after law enforcement traced the calls, identified the caller as 19-year-old Port Lavaca resident Sergio Padron and took the man to court, the woman said her fears remain.

The Victoria Advocate does not name victims of sexual harassment, assault and similar crimes without their permission. Three Crossroads women, one from Port Lavaca, another living in Port O’Connor and a woman who did not wish for her city of residence to be revealed, said they had all been stalked and harassed by the same man.

Although Heard reached a probation agreement with Padron, the prosecutor dismissed at least two other misdemeanor harassment cases. Proving those would be difficult, he said, and a plea agreement for a felony stalking case would be more effective in holding Padron accountable.

“Because of my case being dropped, along with two others, I am back to ground zero,” said a Port Lavaca woman who also said she was a victim of Padron’s harassment. “I was let down by the DA and have virtually no protection because of this. I am angry, nervous, worried and constantly vigilant about my safety.”

But Heard stood by his decision to offer probation, saying it allowed Padron a second chance to correct his behavior while holding the man accountable with a potentially severe prison sentence hanging over him if he committed any future infraction.

“It put a very big hammer over his head,” Heard said.

April 4, Padron accepted a plea agreement that resulted in a deferred adjudication probation sentence for a third-degree felony charge of stalking.

According to his indictment, Padron was accused of making repeated harassing phone calls to the woman that “would cause a reasonable person to ... feel harassed, annoyed, alarmed, abused, tormented, embarrassed or offended.”

Four months after that agreement, Padron was arrested again for harassment, validating his accusers’ fears that he had not been punished severely enough.

Although he had agreed to cease contacting a handful of women who had accused him of stalking, Padron admitted to Calhoun County sheriff’s investigators after his recent arrest that he had disobeyed that condition.

Padron is scheduled to appear before a judge Sept. 26 for a probation revocation hearing, where he could receive up to 10 years in prison. Victoria attorney Tali Villafranca, who is representing Padron in that hearing, did not respond to requests for comment.

As of Friday, he remained in the Calhoun County Jail in lieu of bonds totaling $145,000.

Padron’s accusers said they wonder not only whether Padron will be held accountable but also why the county’s district attorney had not prosecuted him more severely from the outset.

After all, the man did far more than annoy them with phone calls, the women said. They said they feared he not only would re-offend but also become more violent.

Late one fall night in 2018, a Port O’Connor woman was shopping alone at a Port Lavaca Walmart when she noticed a man peeking around the corner of a shelf at her.

“I’m always pretty aware of my surroundings,” she said.

After he continued to follow her through the store for about 15 minutes, the woman became frightened and asked the store’s manager to escort her to her vehicle.

Thankful for that escort, the woman entered her vehicle and prepared to head home only to find the man waiting for her in his pickup with blazing headlamps blinding her.

“I’m not strong enough to fight off a male attacker,” she said. “I don’t have any kind of self-defense skills.”

So when the woman realized the man was following her in his pickup despite her best attempts to lose him, she became desperate and decided to drive to the home of a sheriff’s office official.

“Surely this guy will leave me alone if I go to a residence where there is a sheriff truck,” she said, recalling her thinking that night.

Instead, the man pulled in directly behind her outside the home and turned off his lights. Sitting there in the darkness, the woman began to panic as her calls to the sheriff’s deputy remained unanswered.

That deputy later said the calls to his cellphone were not received because of poor reception inside his home.

“I was scared to sit there with this crazy,” she said. “I was afraid he would get out of his truck.”

The woman said she knew firsthand the potential dangers that can arise when a woman is alone with a violent man.

She recalled a terrifying hitchhiking experience where a man who offered her a ride threatened to sexually assault her.

After parking his pickup on an isolated roadway, he exited, she said, and returned to the cab with a baseball bat, saying she could do things the “hard or easy way.”

The woman said she escaped that encounter only by pretending to be interested in the man before running from his pickup at the first available chance.

Such danger is a fact of life for women, she said, adding she has passed that lesson on to her teenage daughters.

Despite the woman’s best efforts at vigilance, she found herself in a situation that seemed to increase in danger after leaving the Walmart and deputy’s home.

Now on the phone with 911, she drove back into Port Lavaca in search of a public place.

At several intersections, the man pulled up next to her and began staring her down while making lewd gestures with his mouth.

“I was super scared. I don’t know what he was going to do to me,” she said, adding she was trying to hide her tears from the man at the time.

She said she got the truck’s license plate by slamming her brakes at a green light, forcing the stalker to drive past her. That truck, she said, later was traced to Padron.

Finally, she met a Port Lavaca police officer at a parking lot and lost her pursuer.

A third woman living in Port Lavaca said she worries Padron will become increasingly violent if he doesn’t receive appropriate punishment from authorities.

She said Padron began innocently messaging her on Facebook more than three years ago.

Those messages progressed to increasingly sexual phone calls, and the woman said she even suspects Padron has driven by her home, causing her considerable anxiety in her day-to-day life.

The Port Lavaca woman said she has started taking precautions to protect herself when she might be alone whether that be at work, during her exercise routines and at home.

“I have been looking over my shoulder, worried about what might happen,” she said in a written statement, adding, “I am tired of having to constantly look around and worry about who might be following me.”

As with the Port O’Connor woman who said she was followed from Walmart, the Port Lavaca woman said she filed formal complaints with law enforcement that included screenshots and recordings of communications that identified Padron.

Nevertheless, Heard said, he had done the best he could to hold Padron accountable. He also said proving all the cases against Padron would have been too difficult.

Calhoun County Chief Deputy Johnny Krause said his office’s investigators pursued those cases and presented viable reports that should have been prosecuted.

Both cases were dropped by Heard, who chose to solely prosecute Padron for phone calls made to the woman at her place of work.

“If you’ve got multiple offenses, you should not get deferred adjudication,” Krause said. “Because you have already got cases dismissed. That right there is a favor.”

Krause agreed with Padron’s accusers who worried the man’s next crimes would be increasingly violent, making a strict punishment all the more important.

“Any time you have a person who is vulnerable or weaker than their aggressor or attacker,” Krause said, “you want to see justice done because those are the people we are supposed to be protecting.”

POINT COMFORT – Months after he was struck by a hit-and-run driver, a Calhoun County deputy still was struggling with injuries – not all of wh…

A book by Gavin DeBecker from Oprah’s recommended reading, The Gift of Fear. It addresses the mindset of these offenders but also how to manage your interactions with law enforcement in these matters. Good luck.

What events do you miss most from before the coronavirus?