“The port does not want to engage in any kind of dialogue,” said Luis De La Garza, a 59-year-old Port Lavaca resident who is challenging board chairman Randy Boyd in the May 4 election.

De La Garza spoke for five minutes during a public commentary period, claiming the board was wasting hundreds of thousands of dollars of taxpayers’ money by contesting the lawsuit. He was the only one of Boyd’s challengers to appear at the meeting.

In its proposed settlement, the Victoria Advocate is not asking the board for damages, but rather, as the law provides, about $95,000 in court and attorney fees. The newspaper also is asking the port to recognize publicly the importance of the open meetings issues raised in its lawsuit.

Board members for the publicly owned port have spent more than $400,000 in attorney and legal fees.

After the meeting, District 1 Board Member Shields A. “Tony” Holladay Sr. said he respected De La Garza but disagreed sharply with his comments. He also doubled down on the port’s assertion that it did not break the law by failing to notify the public by hiring former congressman Blake Farenthold for a $160,000 annual salary.

“I think the fact that the Victoria Advocate filed the damn lawsuit is the bad part of this whole deal, and I think they should be paying my lawyer,” Holladay said.

Five of the six board members voted to continue defending the lawsuit with board member J.C. Melcher Jr., of District 3, abstaining. Holladay said Melcher chose to do so because he was not present at the initial May meeting in which board members discussed Farenthold’s hiring. Wednesday’s decision echoed a vote at a March 25 meeting in which members also refused to settle.

Holladay continued, saying he is eagerly anticipating a trial with the newspaper, which he expects it to lose, based on advice from the port’s attorney.

Victoria attorney John Griffin, who is representing the newspaper, disagreed, describing the board’s position as indefensible.

“Nothing was on the agenda to alert the public that Blake Farenthold was going to play any role, much less a $160,000 a year role for a port that had never had a full-time lobbyist before,” he said. “It’s reprehensible.”

Both sides are awaiting an appellate ruling requested by the port for a decision by District Judge Bobby Bell to send the case to trial in September. In the meantime, fees continue to mount.

“If I pay the attorney’s fees, I might as well plead guilty,” Holladay said.

“Talk is cheap when he is paying with other people’s money,” Griffin responded.

Griffin further disagreed with Holladay’s opinion that paying the newspaper’s court and attorney fees was unreasonable.

“It wouldn’t be any different than if it was my mother bringing this suit,” Griffin said. “She would have to pay a lawyer. Anyone who represents the public as newspapers occasionally do should not shoulder the responsibility of forcing compliance with our open government laws.” 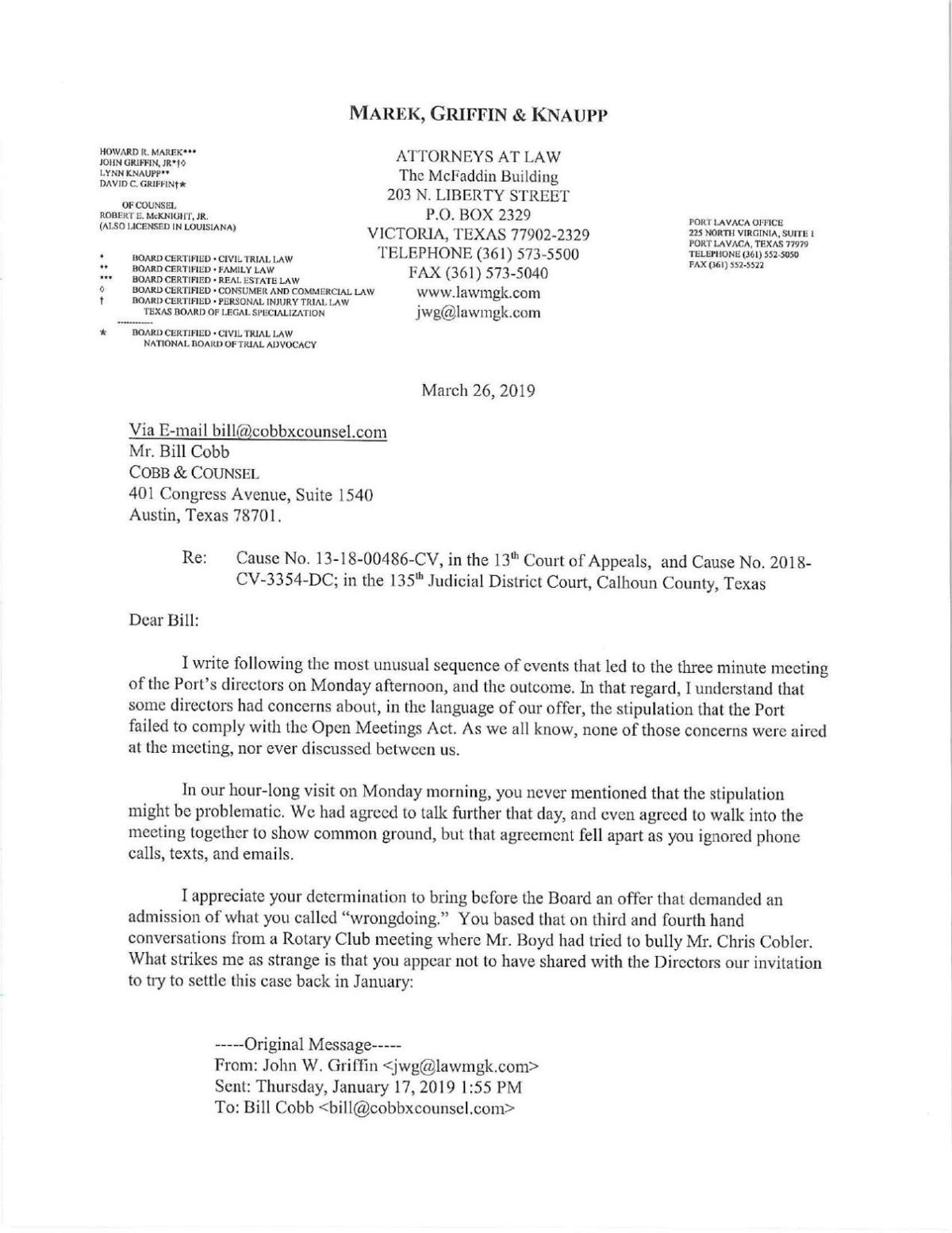