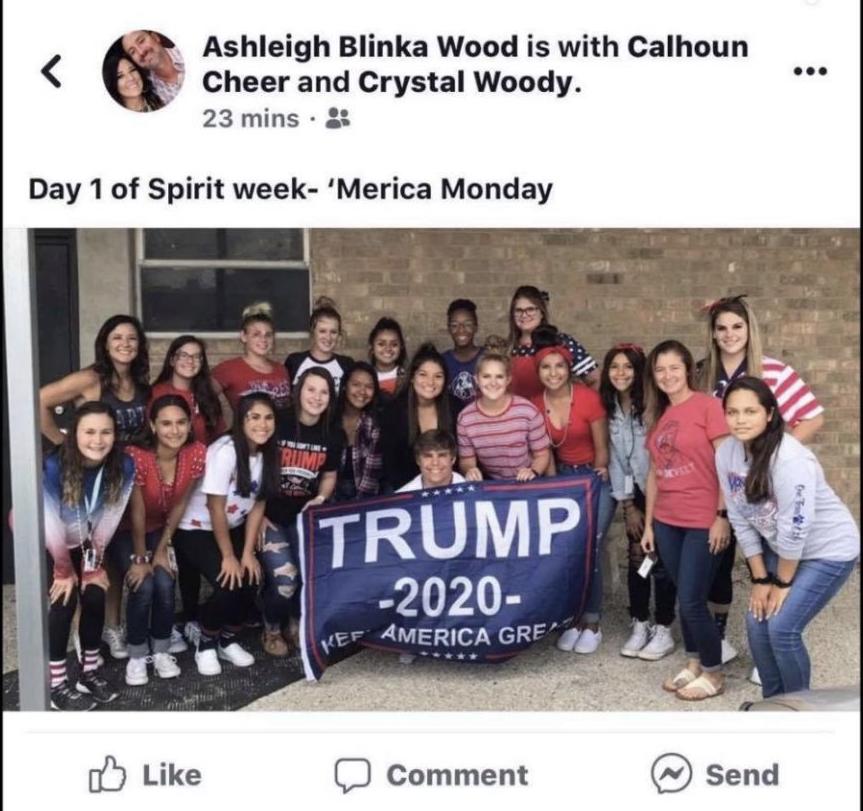 Students pose with a political campaign flag in a photo posted to Facebook about 2:15 p.m. Monday by Ashleigh Wood, a teacher and coach at Calhoun High School. Wood deleted the photo about an hour later. A school official said the post violated district policies regarding political neutrality. 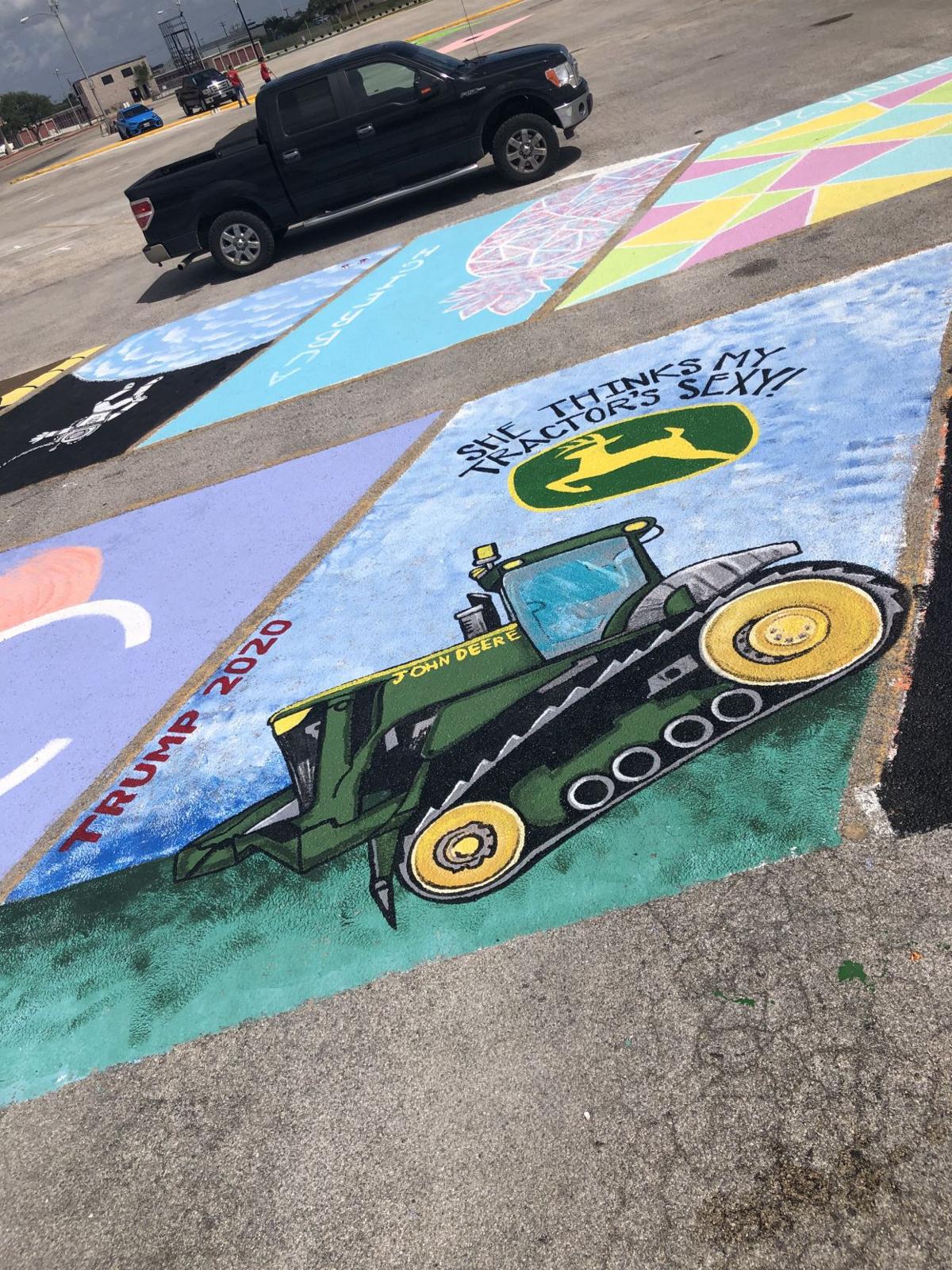 {span}Jax Stringham, a 17-year-old Calhoun High School senior, painted a John Deere tractor and ‘Trump 2020’ on his parking spot at school that he paid to paint. Krystal Stringham, his mom, said he was asked to paint over the political message on Tuesday by the high school’s assistant principal.{/span}

A Calhoun High School employee deleted a photo on Facebook that the district said violated policies regarding political neutrality.

Ashleigh Wood, a history teacher at the school and one of its drill team and cheerleading coaches, posted a photo of a group of students with a “Trump 2020” political campaign flag to Facebook about 2:15 p.m. Monday, when the school was celebrating ‘Merica Monday as part of its homecoming spirit week.

Krystal Stringham said her son, Levi Stringham, brought the flag to school to participate in ‘Merica Monday. He is a 17-year-old senior at Calhoun High School and captain of the cheer team. In the photo, which she said was taken during school hours, he is holding the campaign flag.

Stringham was upset to hear that the teacher was asked to take the photo down, she said.

Should public school teachers be allowed to promote a particular political candidate or cause?

Wood did not respond to requests for comment, but Kelly Taylor, Calhoun’s assistant superintendent, said the photo was deleted from Facebook about an hour after it was posted. She declined to comment about whether the teacher received any sort of retribution for posting the photo.

Even though a student brought the flag to school, the photo violated policy because the teacher tagged the Calhoun Cheer Facebook page in the post “and employees cannot associate the school or a school-sponsored group in political matters.”

Students are encouraged to read, think and develop their own opinion, but employees are not allowed to take political stances with students regardless of the candidate or political party, she said.

“It is not the role of a teacher to impose political opinions on children,” Taylor said. “Political views are to remain private.”

Jeffery Molands, a father of two children who lives at Magnolia Beach, said he disliked seeing so much disagreement and “bashing” on Facebook, where the Advocate’s article received hundreds of comments and shares.

Molands is a self-described die-hard Trump supporter, but said he still does not think school is an appropriate place for political campaign messages.

“It would have been a whole lot better if they had a banner that said, ‘We Love our Country,’ or ‘We Love our President,’ but not something futuristic,” he said. “I don’t think your teacher, your principal or even fellow students should be able to influence your political decisions … people should be able to sit down with information and facts, and form their own beliefs.”

Taylor stressed that students are encouraged to be politically involved and express their ideologies, but Stringham said she disagreed. Her other son, Jax Stringham, who is also a senior at Calhoun High School, was recently told he needed to paint over his parking spot.

Seniors at Calhoun High School were given the option to pay $40 to decorate their parking spots for the school year.

Stringham said her son was called into the assistant principal’s office on Tuesday after he painted “Trump 2020” on his spot. He was told he had to cover up the political message because it was not allowed, she said.

“We have not painted over it yet, but it is wrong on so many levels,” Stringham said. “We spent well over $100 painting the parking spot to begin with and now they are wanting him to paint over it.”

Taylor said the student was asked to paint over the message because it was on school property.

“Children can wear T-shirts, can have a hat, can have bumper stickers on their cars sharing their political views, but the parking lot cannot and the parking lot is part of CISD,” she said. “Schools are neutral zones where children can learn, but political advertising is not something the school district can promote.”

Stringham still disagreed. He paid to paint the spot temporarily and had a right to share his views, she said.

“It is his parking spot that they’re allowing them to express themselves on and he was expressing himself,” she said. “He is a very opinionated kid and put the ‘Trump 2020’ on there because that is what he believes in.”

it would be interesting to have these students take a test on the US Constitution. How well do they understand the event they are participating in regarding integrity in elections. Perhaps if they had a debate regarding the current political issues with a strong need to support and vet their statement. Fact check in real time.

We learned about politics in my government class. I don't see anything wrong with it. They are expressing their support. Democratic kids and teachers can do the same thing but the problem is, they don't have anyone to support! Give that teacher a raise!

That’s not true. Plenty of Democrats but thats not the point. That parking spot belongs to all tax payers in Calhoun county. Again for clarity. This is wrong. Can you say entitled? The parking lot painting just provides another avenue to exclude people and alienate students who’s parents don’t have as much disposable income.

Lisa - A bit off-topic, but are you suggesting that everyone should live as if they're poor in order to not "exclude" anyone? Ideally everyone should have equal opportunity, but outcome is up to each individual and will never be equal for everyone.

You go Krystal, go get them. You and Butch raised a good kid.

Friend of mine went to East school because there was a small poster in the hall favorable to Chairman Mao, wonder how and why that happened. School didn't see anything wrong with it so his son was withdrawn from VISD. Was a few years ago.

This is not okay. Also is the teacher the one who is out of "dress code?"

It’s my understanding from students that at least one teacher at West High School recruited students to participate in Michael Cloud’s Republican campaign for U.S. Representatives in 2018. I personally believe there are benefits to encouraging high school students to participate in ANY campaign versus being oblivious to current politics but most employers, and certainly those supported by our taxes, require political activity to be non-partisan. Public schools are where students learn the core principles of our country's government and history which includes at least two political parties and three branches of government. Teachers should support participation period, not a party or a candidate. By Texas law high schools are supposed to offer voter registration to students turning 18. Is that even happening? I have not met one student that remembers that being offered at their high school.