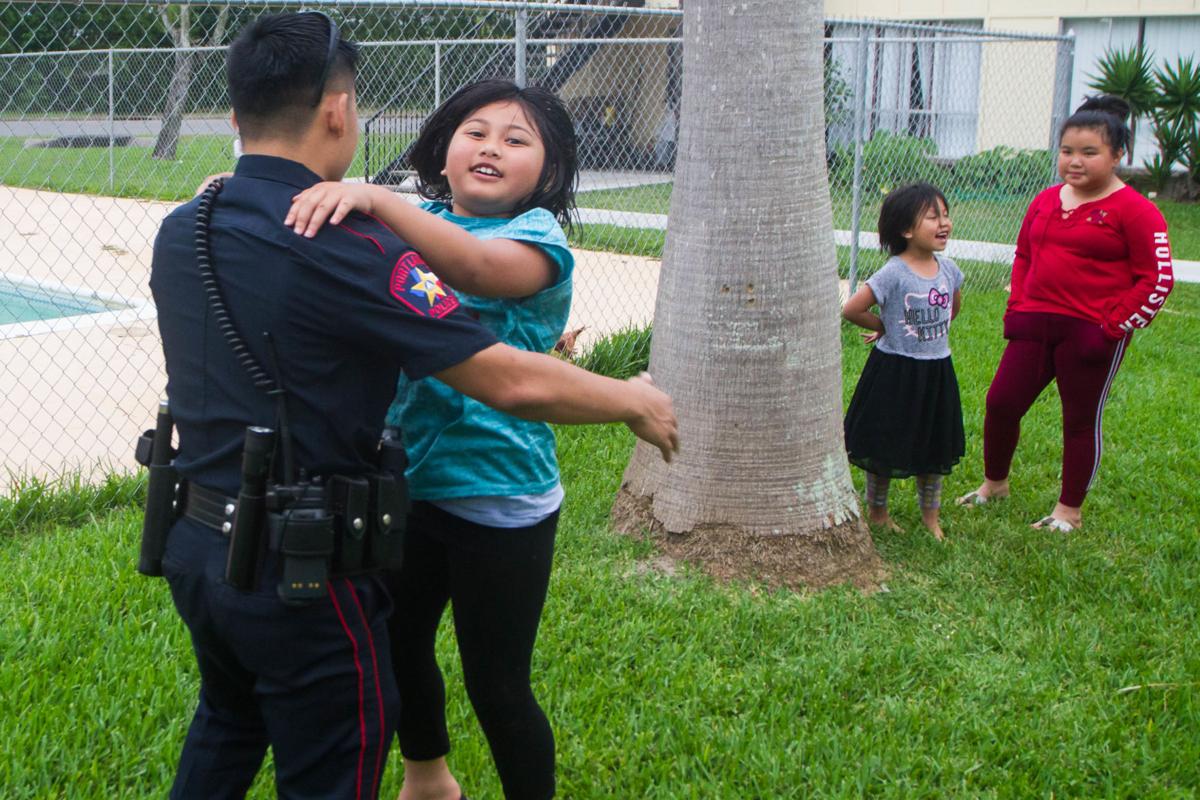 Port Lavaca police officer Kaw Dee hugs Rehana Paw, whom he has known since she was a small child at the apartment complex where Dee used to live. 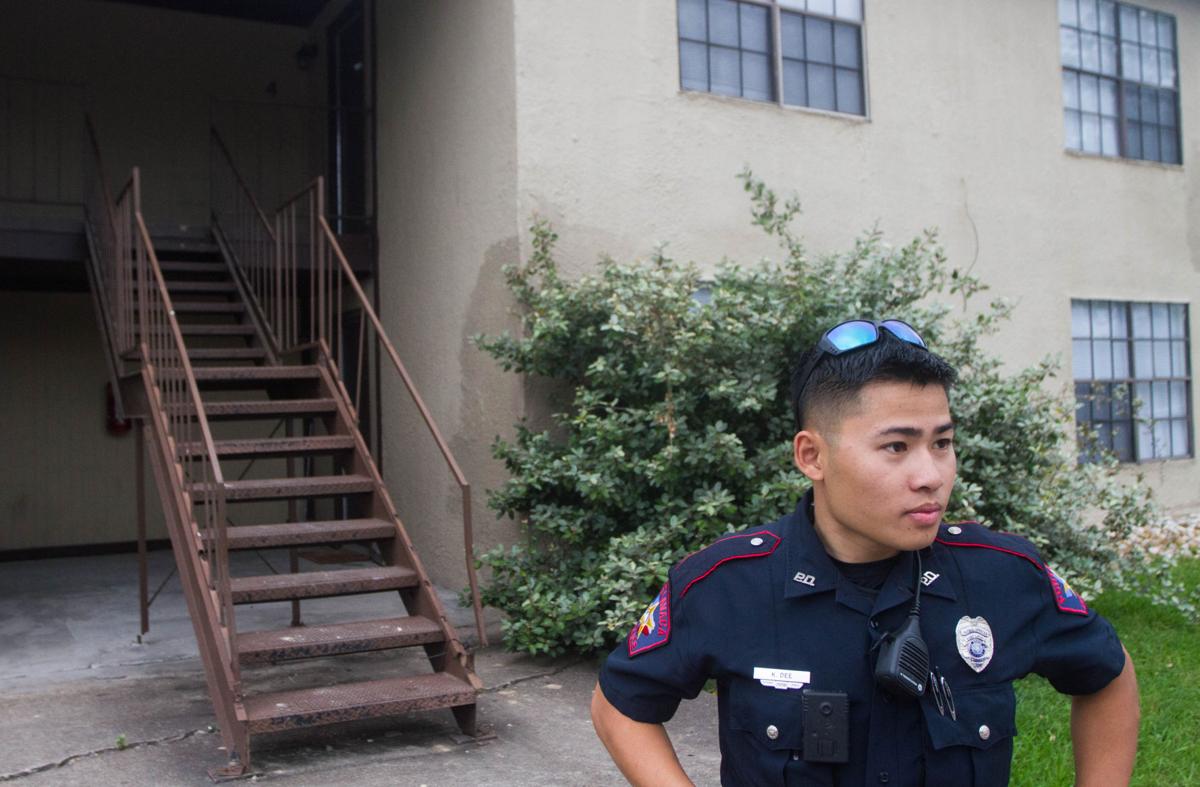 Port Lavaca police Officer Kaw Dee shows the apartment he used to live in with his parents and two sisters. 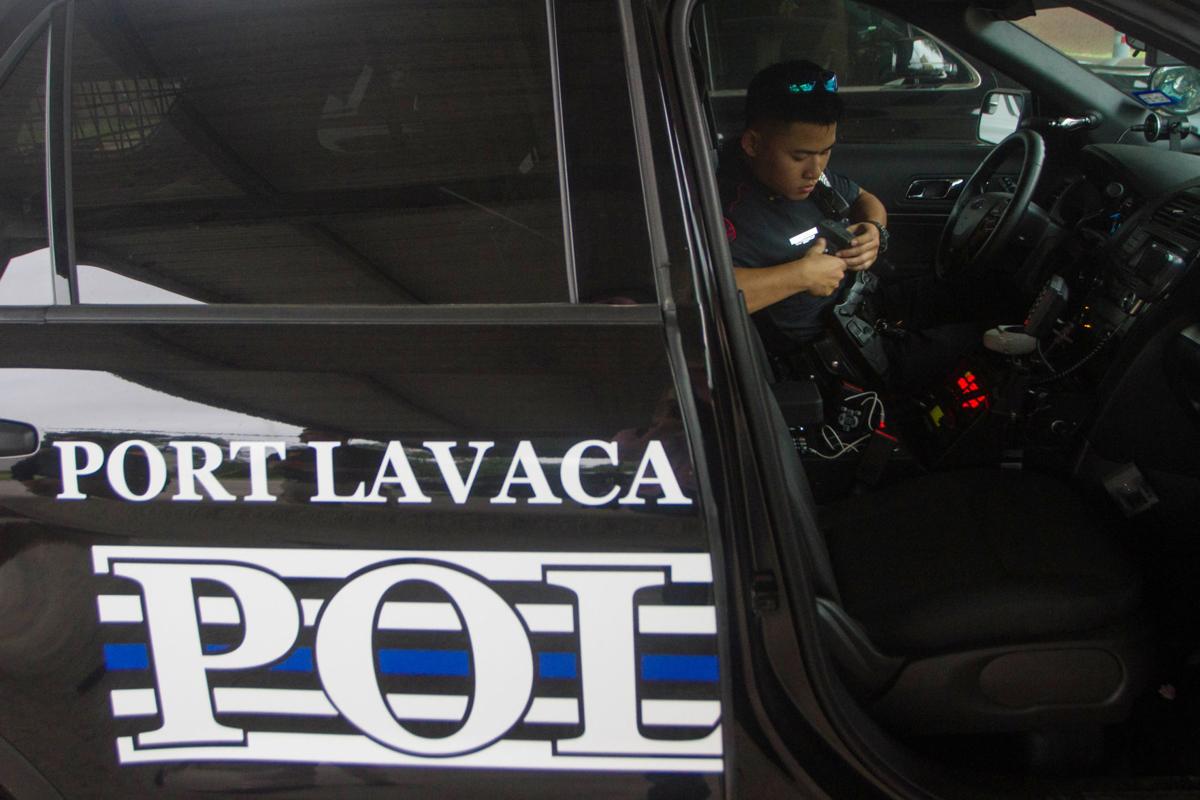 Port Lavaca police officer Kaw Dee prepares his police cruiser before the start of his shift. 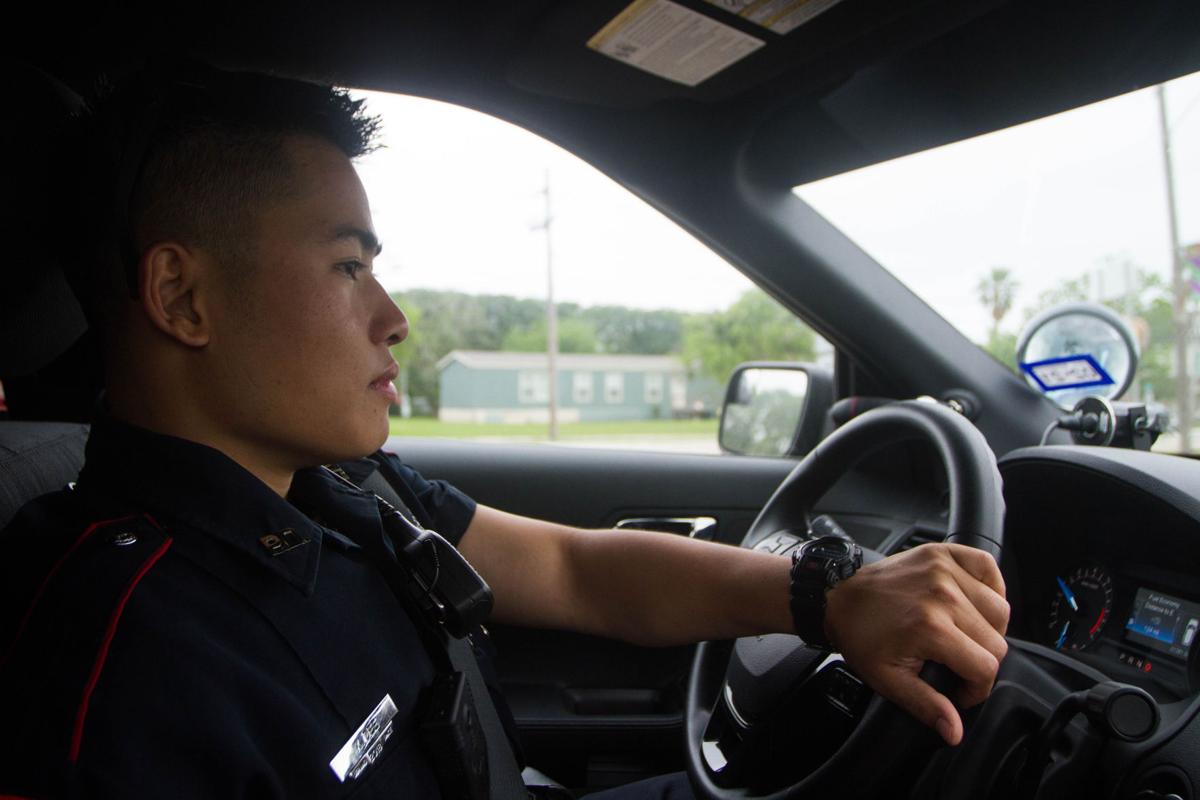 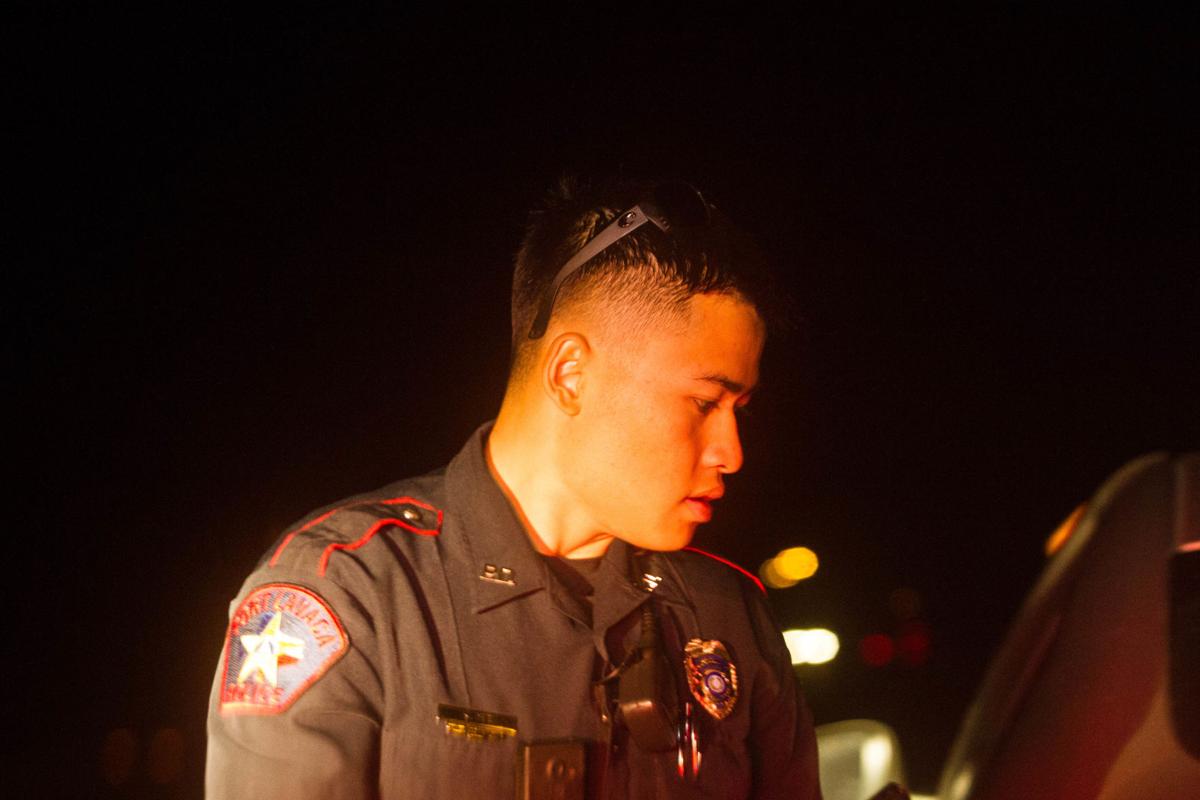 Port Lavaca police officer Kaw Dee walks back to his patrol vehicle after a traffic stop in Port Lavaca. 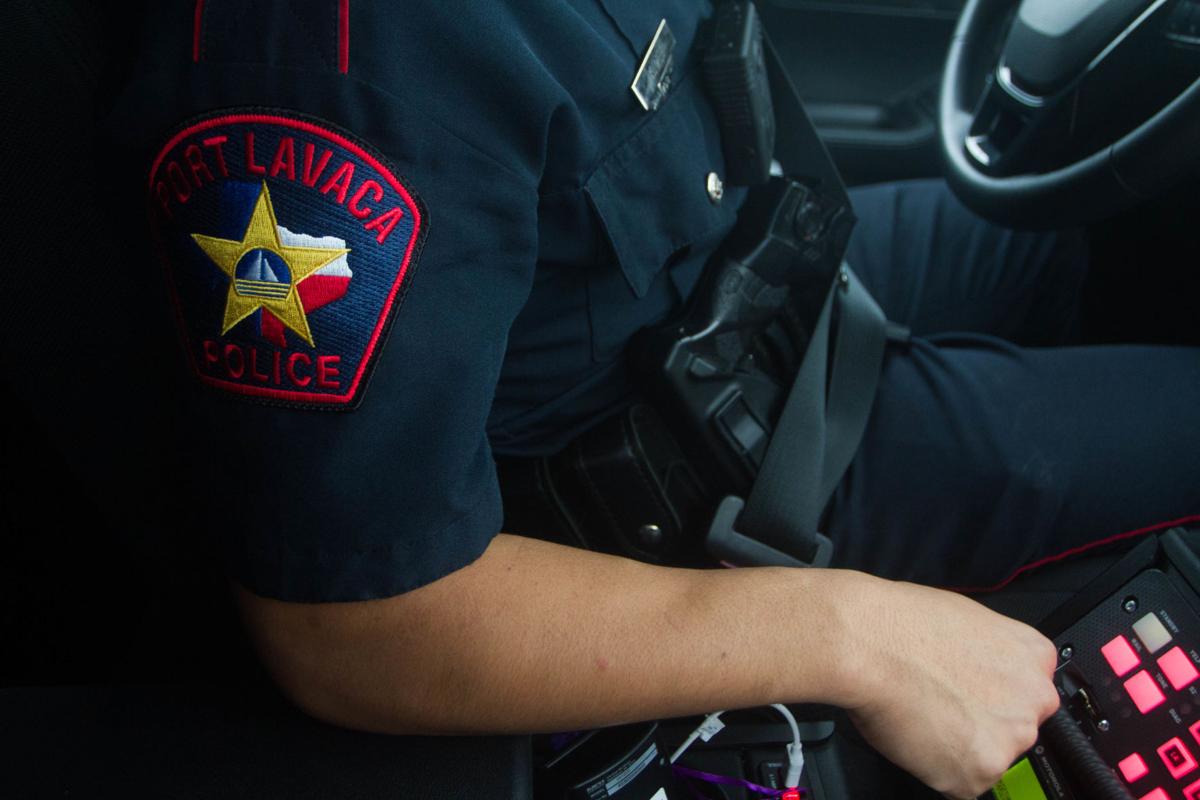 Police officer Kaw Dee changes the channel on his radio at the start of his shift.

Port Lavaca police officer Kaw Dee hugs Rehana Paw, whom he has known since she was a small child at the apartment complex where Dee used to live.

Port Lavaca police Officer Kaw Dee shows the apartment he used to live in with his parents and two sisters.

Port Lavaca police officer Kaw Dee prepares his police cruiser before the start of his shift.

Port Lavaca police officer Kaw Dee walks back to his patrol vehicle after a traffic stop in Port Lavaca.

Police officer Kaw Dee changes the channel on his radio at the start of his shift.

PORT LAVACA – The handful of youths hanging outside Officer Kaw Dee’s childhood apartment ran to the police patrol vehicle when they saw who was driving.

“What’s up, bro? You staying out of trouble?” Dee said to an old friend he had grown up with.

Dee said he is often welcomed with grins and waves of hello from the city’s small but tight-knit community of Karen people. The group has for decades endured a bitter conflict with a Burmese majority population in the southeast Asian country of Myanmar.

On a routine Tuesday night patrol, Dee gave traffic tickets, cited a shoplifter, intervened in a domestic disturbance and stopped to say hello to friends and neighbors in the Karen neighborhoods where he had grown up.

“We still can’t believe he is an officer – you know?” said Khee Htoo, a 22-year-old Port Lavaca resident and Karen woman, who grew up with Dee. She added that members of the local Karen community know they can trust Dee and often approach him with questions from how to deal with a traffic ticket to what to do if a child is missing.

Despite the occasional joking jabs between them, Htoo couldn’t conceal a prideful smile when talking about Dee’s achievement in becoming a police officer.

Dee’s boss, Port Lavaca Police Chief Colin Rangnow, echoed that sentiment. He said Dee is the first officer of either Karen or East Asian descent to serve the department.

“He had a lot of cards stacked against him,” Rangnow said.

Driving through the parking lot of Bordeaux Apartments, a nondescript, stucco complex on the outer edge of the coastal city of about 12,000 residents, memories of his first years in the city flowed like a wellspring from the normally serious officer.

“We used to be poor. That’s weird for me say that,” he said.

But Dee smiled when he recalled how he lived with his parents and two sisters in a tiny efficiency unit at the complex.

Although his parents worked long and hard hours at Inteplast, luxuries were rare for the family. With his parents gone most of the time, he spent most of his free time with other Karen kids, walking to H-E-B or just hanging around outside the apartments.

He also remarked, with a little nostalgia, at how few Karen people remained at the apartments, which once housed only Karen refugees in its 136 units. Almost 10 years later, many Karen people have resettled in Houston and other U.S. cities. But others, like Dee, hope to make Port Lavaca their permanent home.

“We used to own this place,” he said. “There was only Karen people.”

Driving to the exit, he suddenly stopped the patrol vehicle and pointed to a covered pipe jutting from the grass.

At another nearby apartment where he lived as a child, Dee got out of his SUV patrol unit and met a group of excited Karen children with hugs and roughhousing.

“I know what it feels like to be a kid just like them when your parents work all the time,” he said after returning to his patrol vehicle. “We just have to take care of ourselves.”

These days, Dee lives in a middle-class home with its own driveway and considerably more space not too far from his old stomping grounds. But he still lives with his aging parents and sisters.

He had no resentment for that living arrangement, given their sacrifices, which included long hours at the plant, paying his way through the Victoria Police Academy and an upbringing that has made him a hardworking young adult with a burgeoning career.

At the academy, Dee was second in his class academically. He also won the school’s prestigious John F. Baylor Award, which instructors give to the class’s most outstanding student.

Considering his achievements and promise as an officer, Rangnow said he was pleased to have Dee at his small department, where officer retention is admittedly difficult.

“He wanted to serve the community in which he was raised in,” Rangnow said.

While Dee admitted he didn’t remember a lot about the refugee camp where his parents fled to and had him, he recalled a few details.

He remembered living in close quarters with his parents and sisters and the flattened bamboo that lined the floors. In the camp, personal freedoms were few, and refugees were required to obtain permission for the simplest activities.

Despite his family’s early difficulties upon settling in Port Lavaca, blessings abound for him in the Crossroads. On his days off, he sometimes makes the trip to nearby Victoria with friends to the movie theater, where he recently took in “Avengers: Endgame.” After musing for a moment, he revealed his all-time favorite movie is the 2000 Russell Crowe blockbuster “Gladiator.”

Life in the Crossroads has afforded him other opportunities impossible in Myanmar and Thailand.

During middle school in Port Lavaca, he played cornerback for the football team.

There, he met fellow player Kyle Reinhard, 21, and became a regular fixture at his friend’s home.

Tuesday night, he stopped at Reinhard’s home to say happy birthday to his friend. There he was greeted by Reinhard’s effusively loving family, who ran to greet him in their yard with hugs and offerings of food to take with him.

In their yard, Reinhard’s mother, Becky Reinhard, 49, admitted she had fallen for Dee’s personality and welcomed him into her home, where he had become a regular fixture after school and on weekends. Like many of those close to Dee, she couldn’t conceal her pride in his success as an officer.

“You’re going to be a boss one day,” said Becky Reinhard with more than a little playfulness in her voice. “Just remember me – your other mom.”

Connecting with the community, whether they be Karen or otherwise, is important for Port Lavaca police officers, said Rangnow. And officers like Dee, who bring not only the ability to speak another language but also compassion and human connection to their work, are essential.

Although Rangnow admitted Dee is just starting his career, the police chief hoped he would stay.

And, for the time being, Dee had no plans to leave the city that had given him so much.

High above the roaring machines and hustling employees on the work floor of Inteplast's stretch film plant, the flags of 14 nations hang from …