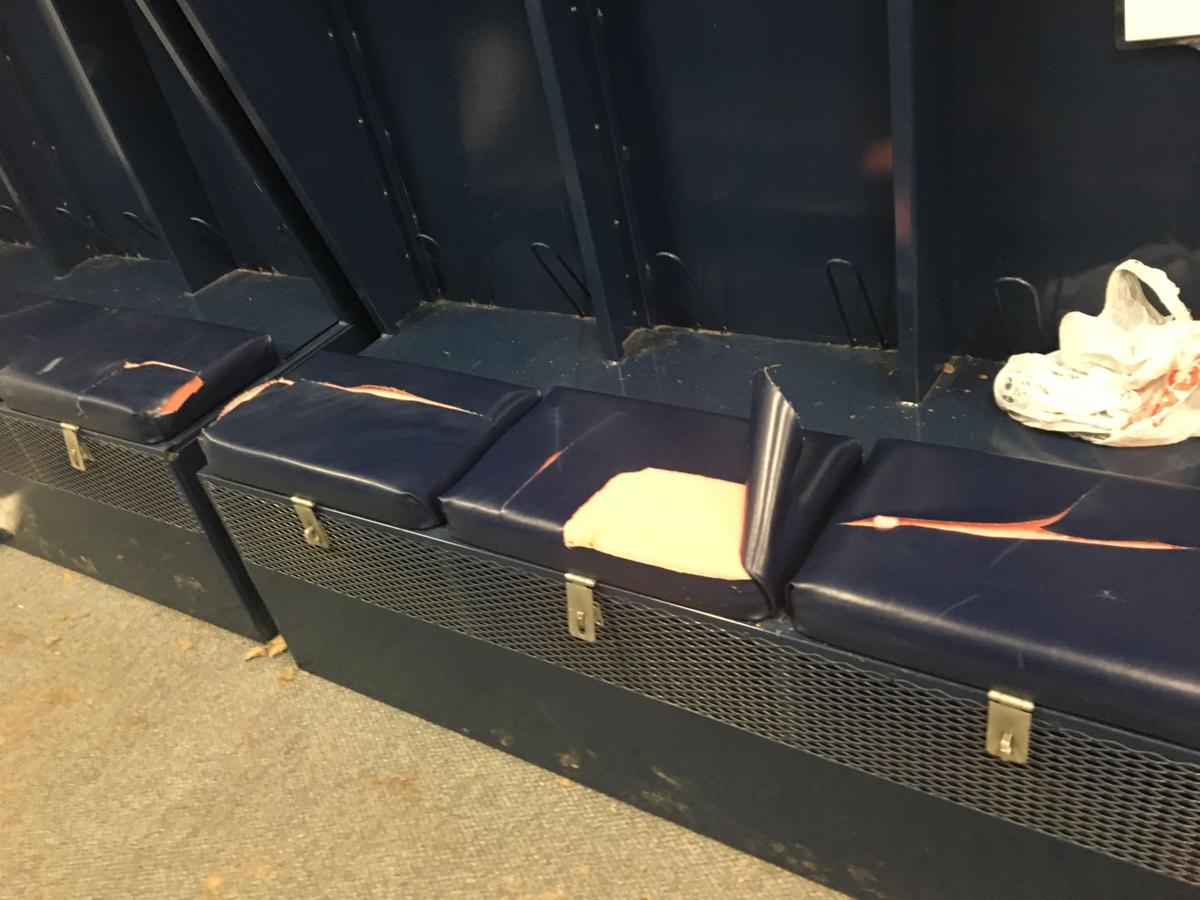 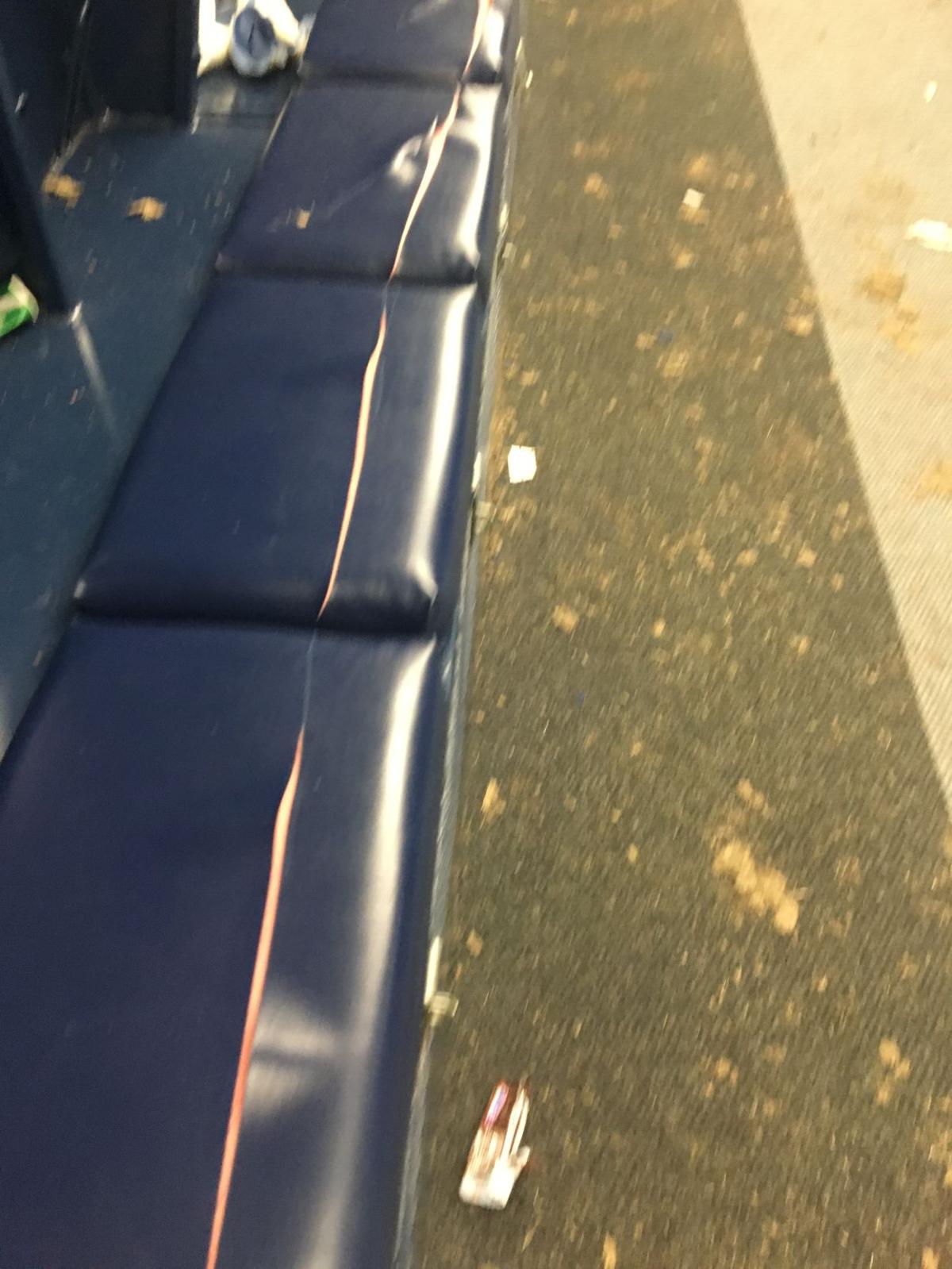 At least 35 slashed seat cushions will cost at least $1,000 to replace although Goliad school officials said that cost could be higher.

At least 35 slashed seat cushions will cost at least $1,000 to replace although Goliad school officials said that cost could be higher.

The morning after a hard-fought football game, Goliad High school officials reported vandalism to their visiting-team locker rooms that could reach into the thousands of dollars.

“I’ve been in this business for 40 years, and I’ve never seen anything like this,” said Superintendent David Plymale, adding, “It’s really disheartening.”

At least 35 custom-made seats were found slashed Saturday morning, the day after the Goliad Tigers narrowly defeated Yoakum High School’s Bulldogs 17-14 with a 41-yard field goal late in the fourth quarter. Other vandalism included a water fountain pulled from its wall fastenings, a damaged shower curtain and shower stalls soiled with urine.

Damage was assessed at about $1,570, but the cost to make the repairs could be much higher, the Goliad superintendent said.

“I’m really at a loss for words,” said Plymale on Monday afternoon.

Monday afternoon, Yoakum Superintendent Tom Kelley issued a news release, condemning the act and promising an internal investigation. He also promised the damage would be repaid by the district.

“This conduct does not conform with the high standards that Yoakum (Independent School District) sets for its students. Although friendly community rivalries can be entertaining, this type of conduct has no place in interscholastic competition,” Kelley said.

Although Plymale confirmed a person had confessed to the crime, neither he nor Kelley would identify the person.

“We have a student that has acknowledged responsibility, which we are addressing. Due to federal education privacy laws, the district cannot comment more specifically,” Kelley said.

Goliad officials may be required to replace all of the locker room’s seat cushions, which were purchased about eight years ago to match the school’s colors.

On a Yoakum Bulldogs’ Facebook page, fans and residents were expressing their regret and apologies to Goliad fans about the vandalism that appeared after the Bulldogs’ loss.

“There needs to be class and respect whether you win or lose,” said Yoakum High School 2016 graduate Nicci Berkovsky. “After all, it’s just a high school football game, it’s not like you can’t or won’t win next time.”

Berkovsky, 20, who now lives in Victoria, said she could not recall anything similar happening when she was in school. If it did happen, she said any player responsible would have been punished accordingly.

As an alum, Berkovsky said she feels disappointed in whoever committed the vandalism because the behavior is uncalled for.

“I’m glad the school is paying for the damages, but I feel the person or persons responsible should be the ones paying for what they have done,” she said. “This is in no way acceptable.”

Capt. John Pape, a Goliad County Sheriff’s Office spokesman, said the locker room seats appeared to have been cut with plastic from a shattered food tray left in the area.

While Goliad County sheriff’s investigators have yet to identify suspects in the vandalism, they have narrowed down the possibilities, Pape said.

School officials determined the damage was done sometime after Friday’s football game. Although Plymale said one person has confessed to the crime, camera footage recorded elsewhere in the school have led the superintendent to suspect more than one person was involved.

Criminal mischief, the legal term for vandalism in Texas, is a state jail felony if the damage is assessed between $750-$30,000 and the damage is to a community center that provides educational programs. State jail felonies carry a range of punishment of 180 days to two years in prison with a $10,000 fine.

Ben Gray, a defense attorney and former juvenile prosecutor for Victoria County, said a few options are possible for the accused depending on their ages and whether Goliad school officials wish to pursue criminal charges. Goliad County is represented by District Attorney Rob Lassmann.

If between the ages of 10 and 16, the accused children would be prosecuted as juveniles with the possibility of probation as punishment.

For a person older than 17, charges would be made according to the Texas Penal Code with the possibility a state jail sentence.

But if Goliad officials ask for charges to be dropped, prosecutors would likely offer a plea deal for probation, community service or restitution, Gray said.

And anyone accused of the vandalism, no matter their age, will have the right to trial, he said.

Plymale made no comment about what he would recommend to prosecutors.

“The incident is still being investigated and a decision has not been made at this time,” he said. “We do want those who caused the damages to be held accountable.”

Yoakum ISD has launched an investigation into the vandalizing of the Goliad locker room after the game between Yoakum and Goliad on Friday night. This conduct does not conform with the high standards that Yoakum ISD sets for its students. Although friendly community rivalries can be entertaining, this type of conduct has no place in interscholastic competition. Yoakum ISD will address this situation in accordance with the YISD Student Code of Conduct. Due to federal education privacy laws, the district cannot comment more specifically.

The district has offered to pay for the damage and sincerely apologizes to Goliad ISD, its administrators, employees, students and families. Yoakum ISD wishes Goliad ISD well in its upcoming playoff game.