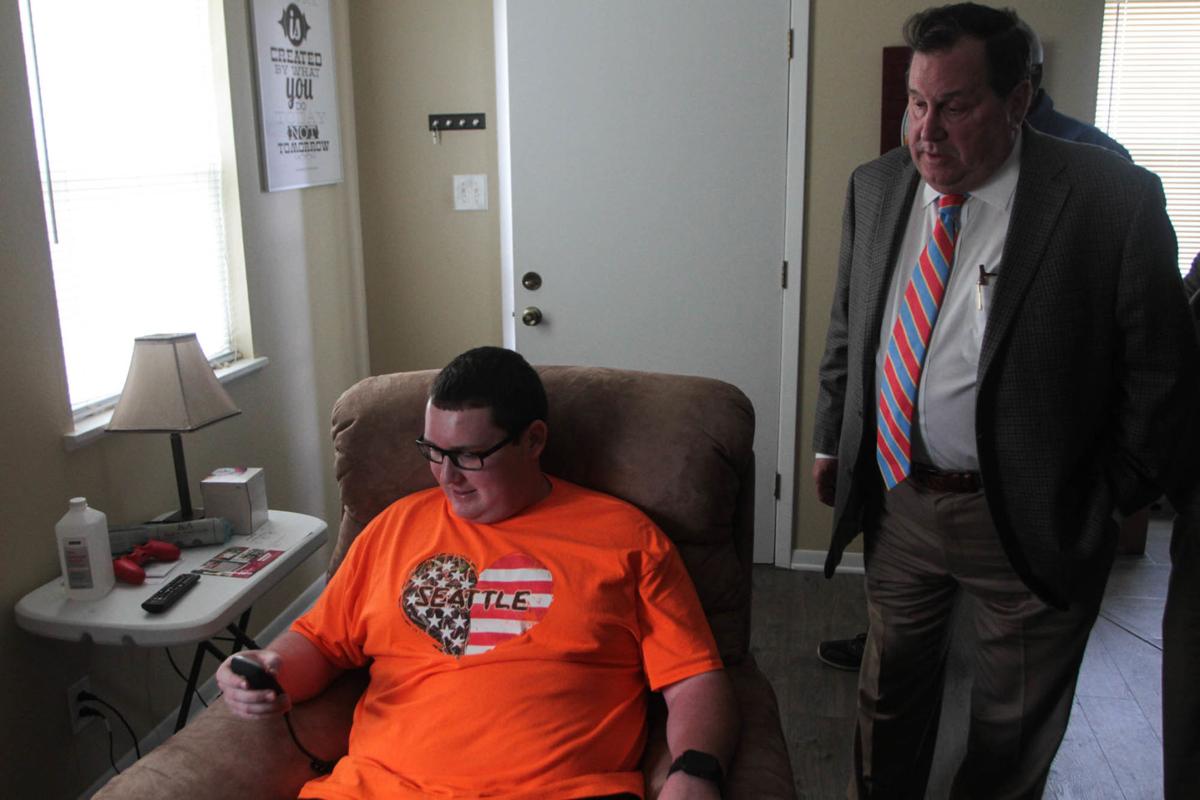 Buddy Kamin explains to Calhoun County Deputy Trenton Ballard how to operate his new recliner. Kamin Furniture donated the furniture Thursday to Ballard, who was injured last week when he was struck by a vehicle. 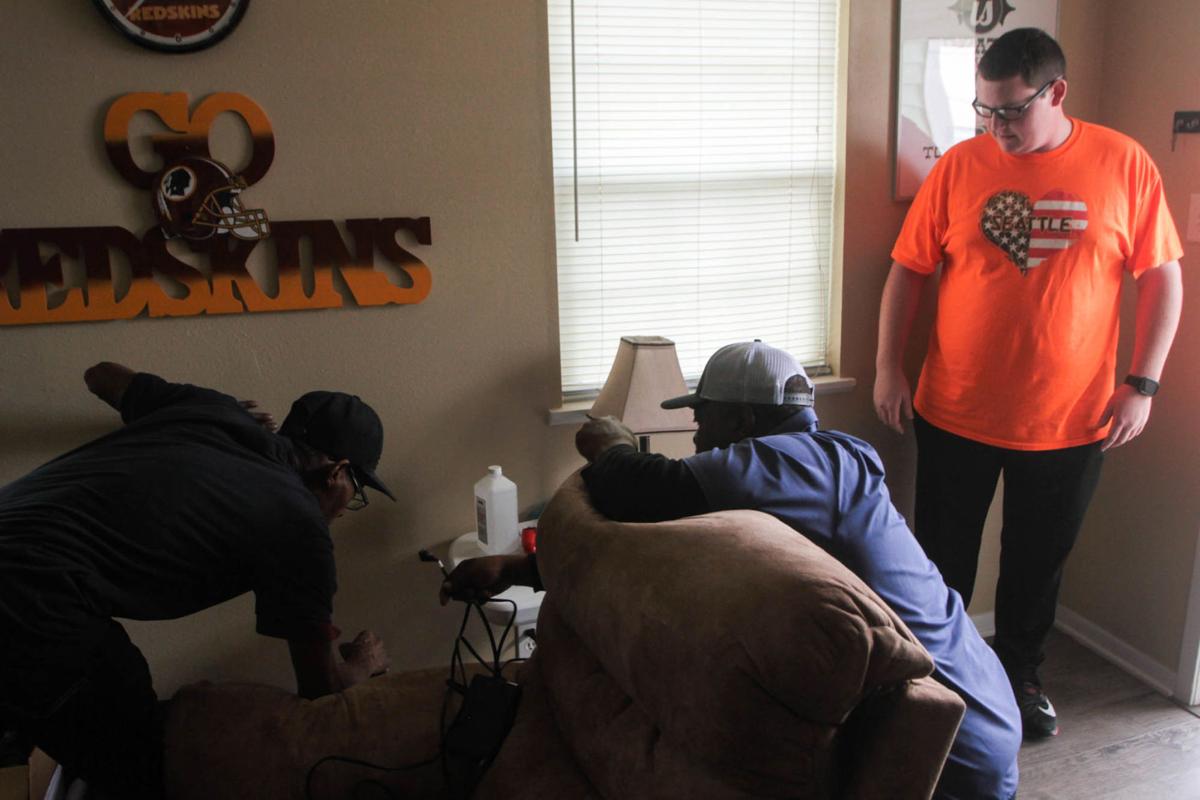 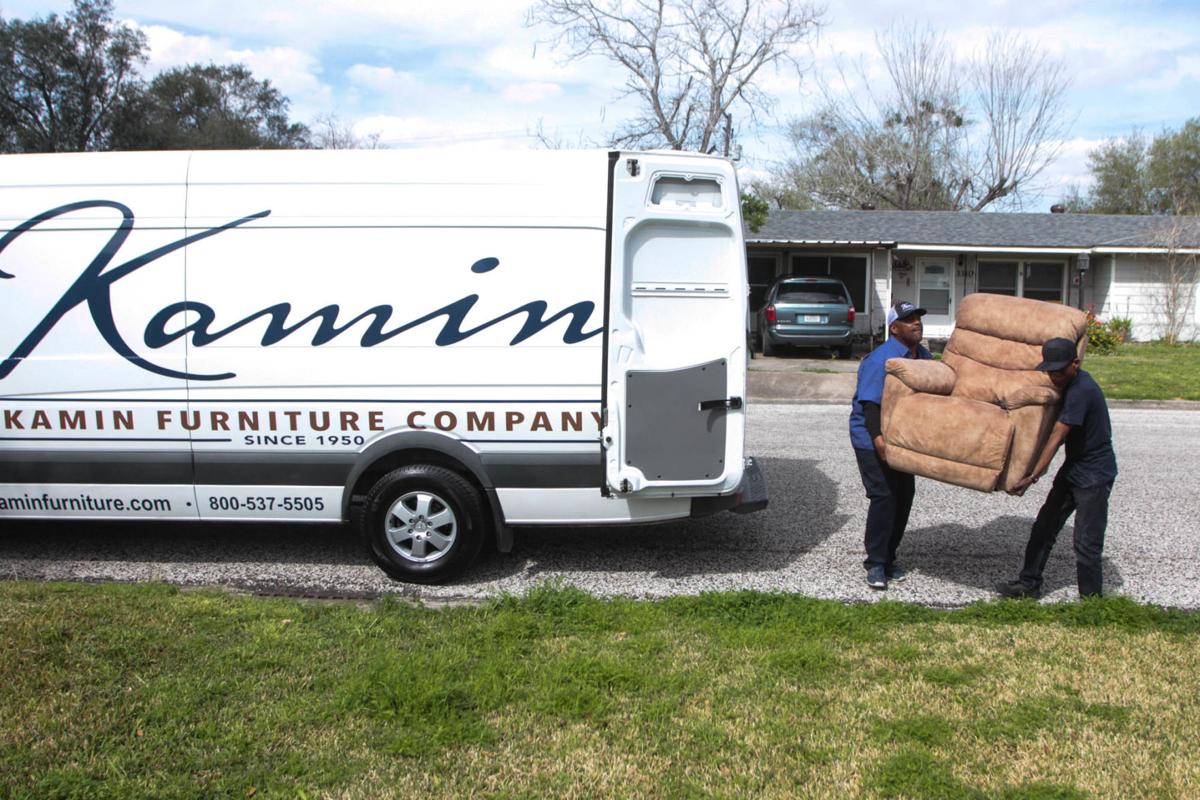 Kamin Furniture donates a recliner to Calhoun County Deputy Trenton Ballard, who was injured last week when a vehicle struck him while he was directing traffic.

Buddy Kamin explains to Calhoun County Deputy Trenton Ballard how to operate his new recliner. Kamin Furniture donated the furniture Thursday to Ballard, who was injured last week when he was struck by a vehicle.

Kamin Furniture donates a recliner to Calhoun County Deputy Trenton Ballard, who was injured last week when a vehicle struck him while he was directing traffic.

For as long as Trenton Ballard can remember, he has always aspired to be a member of law enforcement.

That dream nearly ended for the 23-year-old Calhoun County deputy Feb. 8, when he was struck by a passing pickup truck while he was directing traffic on SH 35 near Gate 6 of Formosa Plastics near Point Comfort.

Thursday morning, though, Ballard was standing in his front yard when a Kamin Furniture truck arrived with a recliner for the deputy.

“I don’t even know what to say. It’s crazy and overwhelming, in a good way,” Ballard said.

Buddy Kamin, of Kamin Furniture, said when he read about Ballard’s accident, he immediately wanted to do something for the Victoria resident. He delivered a recliner to Ballard’s home on Woodlawn Street along with Calhoun County Sheriff Bobbie Vickery and Chief Deputy Johnny Krause.

“I have great respect for law enforcement, and so I wanted to do something to help him (Ballard) recover and feel better,” Kamin said.

Ballard suffered a severe concussion and was sent to Memorial Hermann Hospital in Houston, where he spent a couple of days recovering, Ballard said. He also suffered a few scratches to the face.

As Ballard recovers from his head injury, he has had trouble standing and sitting up quickly, said Johnnie Luna, a family friend of Ballard. Luna was at Ballard’s home Thursday when Kamin and Vickery surprised Ballard with the recliner.

“He’s like family, so when we found out about the accident, it really hurt us,” Luna, 68, said. “It’s good that they’re doing this for Trenton. He’s a first responder, and they’re the ones out there protecting and helping us. It’s good to see others help him, too.”

Ballard, who started as a jailer with Calhoun County in 2016, said he was almost at the end of his night shift when he was struck. He has been recovering at his home with the help of family and plans to return to work once he fully recovers.

The accident hasn’t changed how he feels about his career, though.

“It’s a taxing job, but it’s well worth it. I wouldn’t want to do anything else,” Ballard said.

Vickery said Ballard walking away from a wreck with nothing worse than a concussion and a few scratches is a miracle.

“God was watching out for him that day. It could have gone the opposite direction, and Trenton wouldn’t be standing here today,” Vickery said. “There’s no other explanation for me.”

The wreck is under investigation by the Department of Public Safety and no arrests have been made.

The phone call that woke Sheriff Bobbie Vickery on Friday morning was a real-life nightmare.