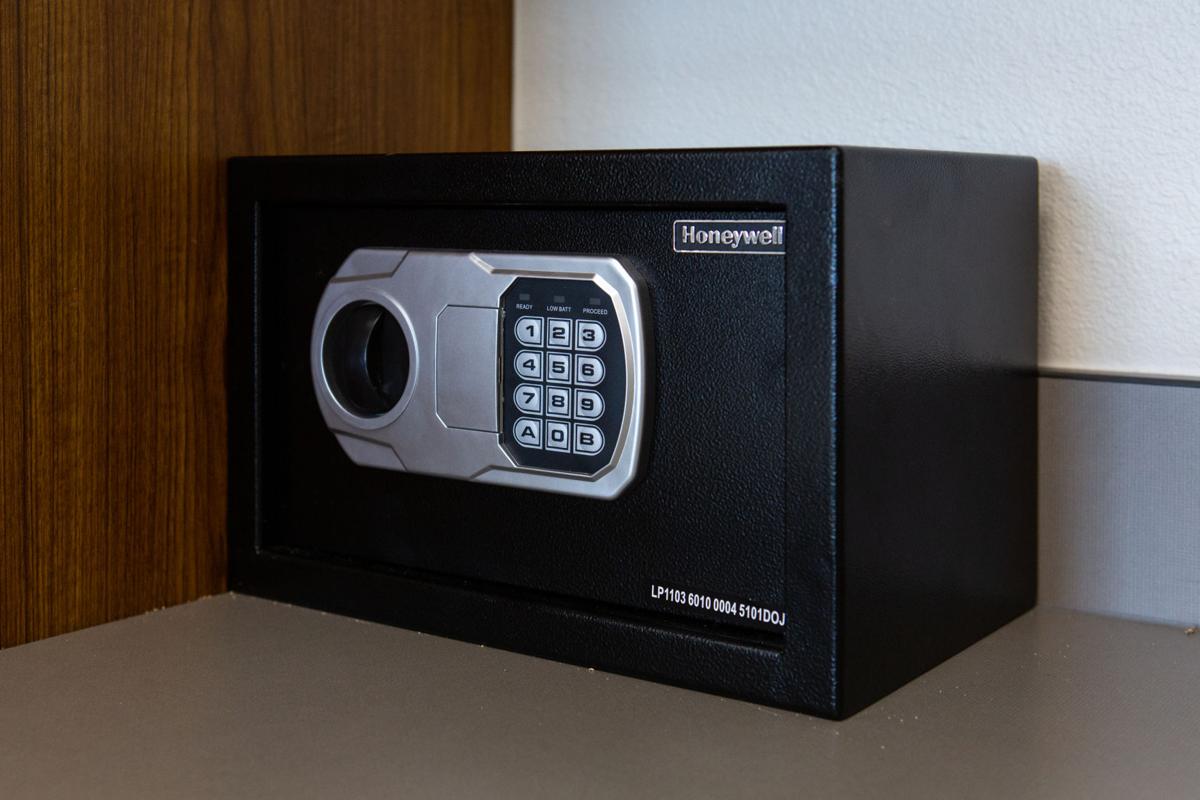 Gun safes were installed in classrooms at Edna High School, one of many rural schools that have become part of the Guardian Program. Teachers are required to go through an extensive training course to be able to keep weapons inside the safes. 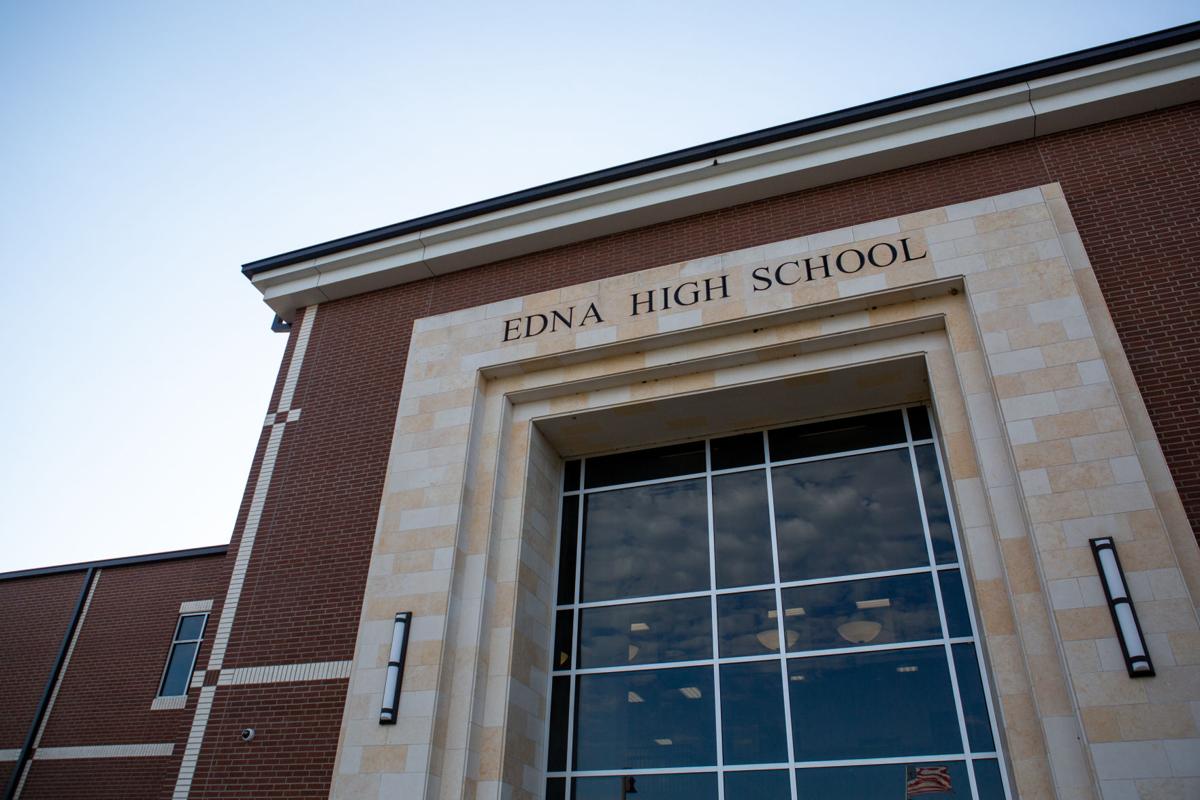 Edna High School is one of many rural schools that have become part of the Guardian Program, which allows teachers who have completed an extensive training course to have guns in safes in their classroom to protect themselves and students in the event of an active shooting.

Gun safes were installed in classrooms at Edna High School, one of many rural schools that have become part of the Guardian Program. Teachers are required to go through an extensive training course to be able to keep weapons inside the safes.

Edna High School is one of many rural schools that have become part of the Guardian Program, which allows teachers who have completed an extensive training course to have guns in safes in their classroom to protect themselves and students in the event of an active shooting.

Rural school districts aren’t leaving safety up to chance. More and more, they are putting the guns they fear in the teachers’ hands.

The Edna school district implemented the Guardian program at the beginning of the 2019-2020 academic year after about a year of planning. Through the program, a teacher can volunteer to be a guardian and receive training and evaluations before having their classroom fitted with a handgun locked in a small safe.

After seeing school shootings in the news, such as the ones at Sandy Hook Elementary School in 2012 and Santa Fe High School in 2018, school board member Brandon Peters said it was time to take action at home.

“I hope the situation will never happen,” he said. “I hope this is more of a deterrent than anything. But, I do feel a lot better.”

Should trained teachers have guns in their classrooms?

Edna ISD is one of five rural school districts in the Crossroads that have implemented the Guardian program, which allows select faculty to operate handguns within school walls. Other schools within Jackson and Goliad County look to implement the program in the next year.

Since 2010, there have been about 419 shootings in K-12 schools in the U.S., with 110 of them happening in 2018, according to the Center for Homeland Defense and Security. During those nine years, 272 school shootings were committed with handguns.

The Guardian program is one option Texas schools now have when determining safety measures. It allows teachers to operate handguns in times of crisis, like active shooter scenarios.

As school shootings became prominent, so did anti-gun proponents. But Texas Legislatures went in a different direction. During the 2013 Texas Legislative session, legislatures passed an expansion of the Guardian program, which started in a rural North Texas school. The law requires teachers to receive police-like training before being deemed guardians.

Similar laws include the Protection of Texas Children Act, which allows one school employee per 400 students to be armed and trained as a school marshal.

Texas was the second state to explicitly allow teachers to carry handguns.

Programs like these, authorized by the school board, are prominent in rural school communities because of the vast space between schools and limited law enforcement resources, which creates longer response times.

“The reason we wanted a Guardian program is because we are more rural,” Peters said. “We can’t depend on a quick response time. I think that’s the society we live in today.”

Edna is split by railroad tracks with schools on either side, which could interfere with response times if a train were traveling through town. Peters said he didn’t want to leave the children’s safety to chance.

Peters explained that Jackson County is a large area for law enforcement to cover. He and the rest of the school board wanted to ensure their students would be safe in a time of crisis.

“The school board, we were all unified in making the decision,” he said.

“There is risk in everything we do. With kids, we minimize the risk with proper training,” Louderback said. “Taking one of the most effective tools to stop a shooter to save lives is an accessible risk.”

Louderback has been a longtime proponent of teacher carry. He said with psychological evaluations and police-like training, school employees are prepared to hinder an assailant in time of need.

“It’s something I’ve always believed in,” he said. “We have to move to adapt and change to our environment.”

He said the Guardian program is the best form of protection for school districts like the ones in Jackson County.

“Seconds count here,” Louderback said. “This is where we’re caught with an unpredictable location and time.”

Teachers know the students and building better than anyone, and in time of need, they are the first responders, Louderback noted.

He said the program is a marriage between law enforcement and the school to create a safe environment.

“I do know, unequivocally, a rural school can benefit from this,” Louderback said.

Edna assistant superintendent Madalyn Maresh said she never imagined needing guns in a classroom, but she is glad Edna is at the forefront of protecting its students.

“As events around the country happened and things got closer to home, we started giving it serious attention,” Maresh said.

Every classroom in the district is equipped with a small gun safe, but not every classroom has a gun, she said. The only way the program works is through guardian anonymity.

“It is not our one-size-fits-all safety measure. It’s one component, and it’s absolutely a last resort,” she said. “A big part of the guardian program is a deterrent.”

As an administrator, Maresh said it was difficult to watch school shootings unfold over the years and the stories that came from them.

“They were defenseless. You had a teacher stepping between a child and a gunman to protect these kids,” she said. “For us to have a fighting chance, we had to do something more than having to defend them with their bodies.”

School officials didn’t want Edna to be in the same position, Maresh said.

“It’s really alarming that this is the kids’ reality in this day and time,” she said. “It’s our duty and obligation to adjust and do what we can to protect them.”