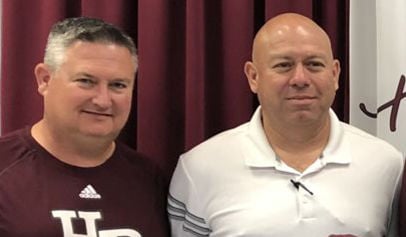 “What this tells me is there is not even probable cause that any crime ever happened,” said Houston attorney Wes Rucker, who is representing Hallettsville head baseball coach Calvin “Shorty” Cook, said Friday.

Nevertheless, Fryer said Wednesday that he has decided to continue prosecution against the three Hallettsville school officials who were indicted on state jail felony charges of failure to report the abuse. In Texas, school officials are required by law to report allegations of abuse.

“When a DA declines something, or any prosecutor, they are usually declining it based on insufficient evidence to prove it beyond a reasonable doubt. They are not making their own finding of whether or not it happened,” Fryer said Wednesday.

Assistant principal and head basketball coach Scott Cottenoir, Principal Darrin Bickham and Cook face between 180 days to two years in jail as well as a $10,000 fine.

“We are adamant in his innocence,” said Houston attorney Larry McDougal, who is representing Bickham. “This was nothing that was unexpected by us. We are looking forward to showing the citizens of Lavaca County that he’s innocent in a courtroom.”

“I have dealt with that prosecutor in Medina County,” said San Antonio attorney James Reeves, who is representing Cottenoir. “If she had any evidence that sexual assault occurred, I have no doubt that she would have indicted.”

Neither Fryer, who is handling prosecution against Cook, Cottenoir and Bickham, nor the Medina County District Attorney’s office could be reached for comment Friday.

While Rucker said an argument could be made that Cook failed to report abuse allegations even if there was no underlying abuse, he said his client acted appropriately.

“The question is what information did (Cook) have?” Rucker said. “Mr. Cook was told of a rumor. Another person called Coach Cook and said, ‘Hey, I heard from another person who heard from high school gossip that something may have happened to this young man.’”

After that notification, Cook interviewed the alleged victim and victimizers, who denied the allegations, Rucker said.

Those interviews led Cook to think the abuse allegations were unfounded, Rucker said.

“He had zero context as to what that meant,” Rucker said.

The attorney added that if his client had reported the allegations, he could have been charged criminally or held civilly liable for making a false accusation.

“The kid assured him that he was fine and nothing illegal had happened to him,” Rucker said. “He said there was no bullying, no harassment, that basically, he and another group of boys were goofing around, and they were giving him grief because it was his birthday.”

A video recorded of the alleged abuse inside a room at a Hondo hotel March 2 shows the incident at the heart of the failure to report charges, Rucker said.

Although Rucker said the video was provided to him through discovery for his client’s case, the attorney also said the video is available through other means but declined to say where.

Unlike himself, Cook never had the chance to view that video in making his decision to report or not report the allegations.

“The video depicts no sexual abuse, it depicts exactly what this young man said – a room full of boys. The victim is wrestling with another young man, wiping chocolate cake brownie on the backside of pants,” Rucker said.