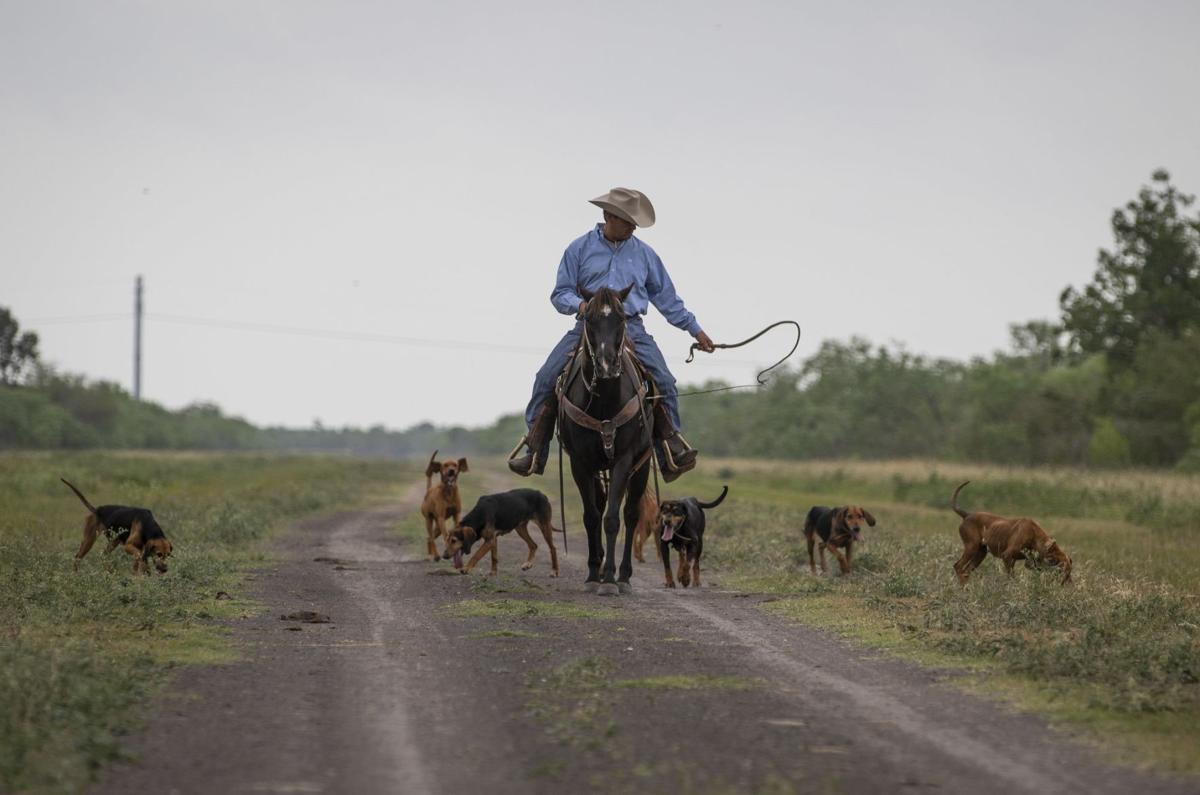 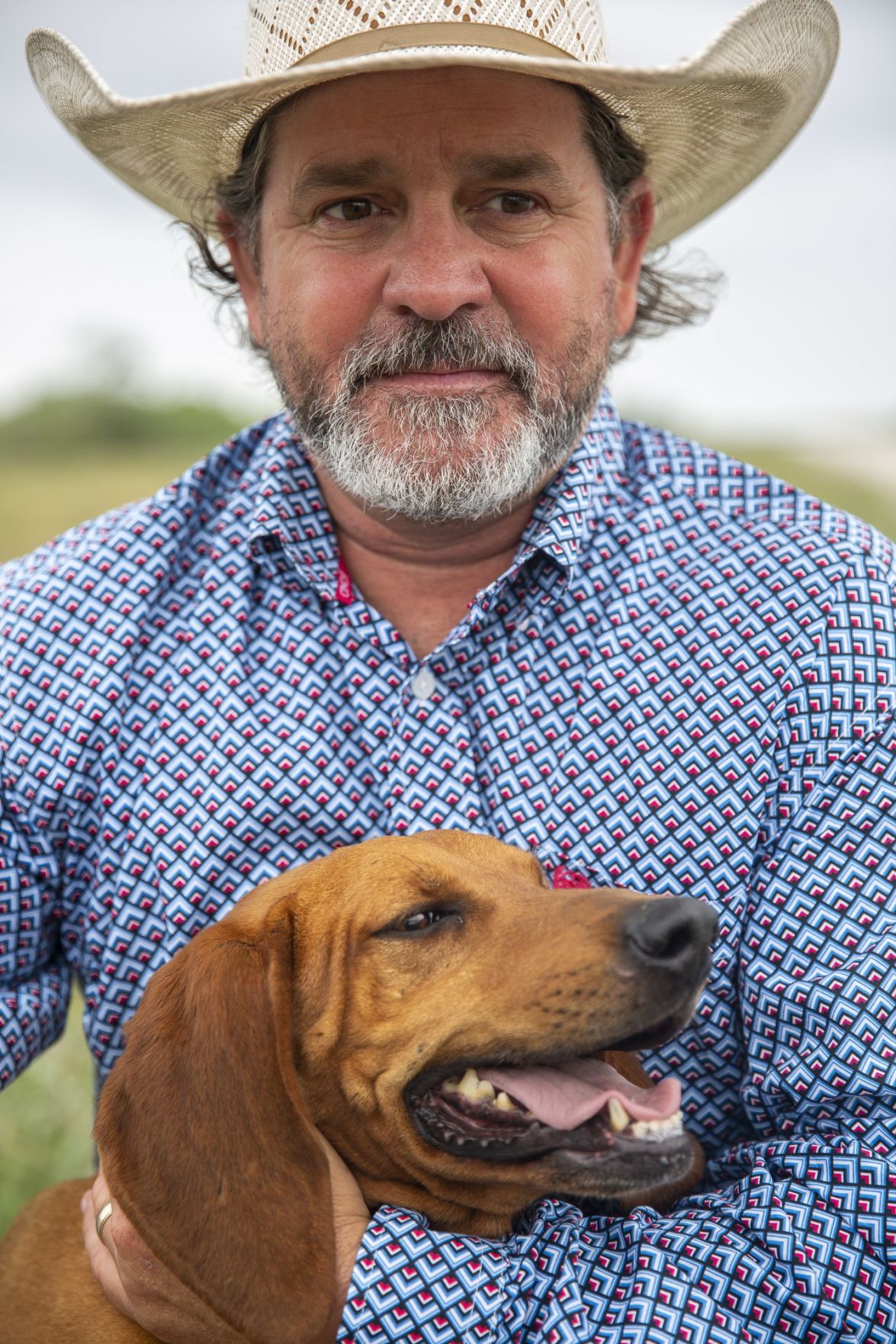 Ranch owner Joe Braman, 45, holds a coonhound he’s training to track humans on his ranch in Refugio County. Braman is training a pack of dogs to track rhino poachers in South Africa. 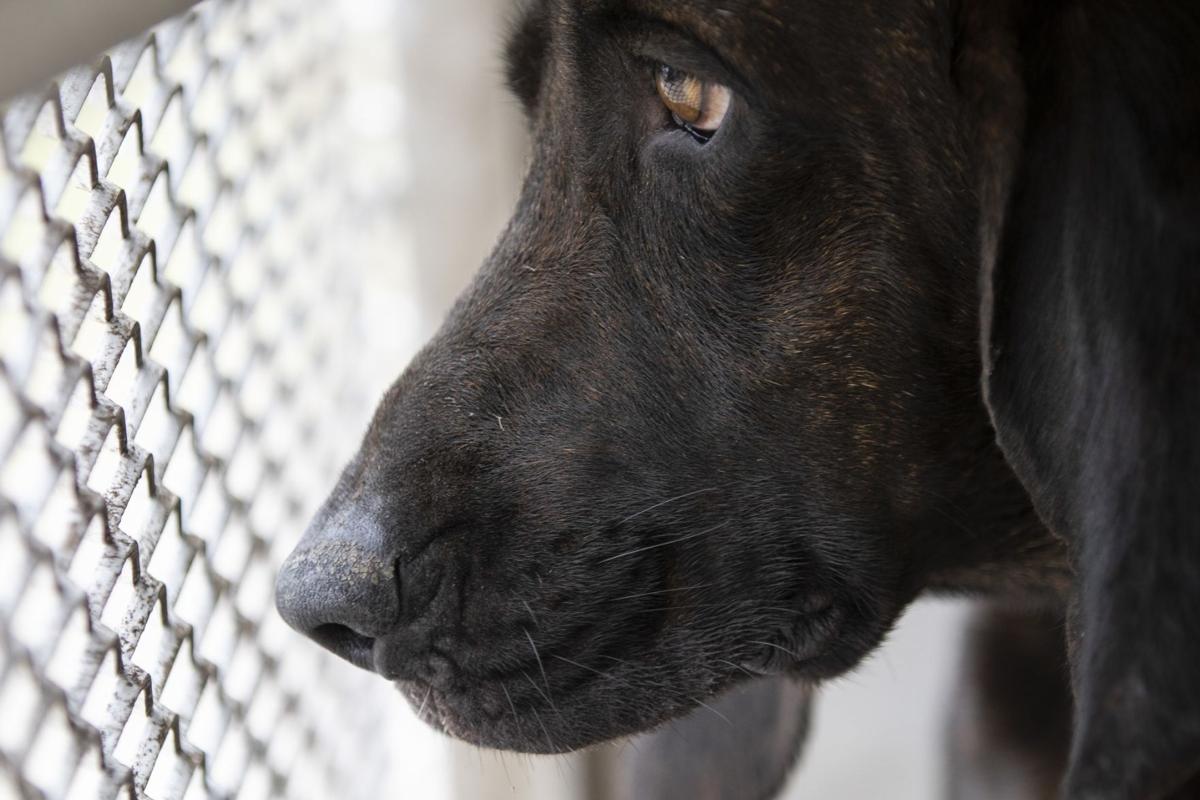 A tracking coonhound looks through the screen of a kennel. 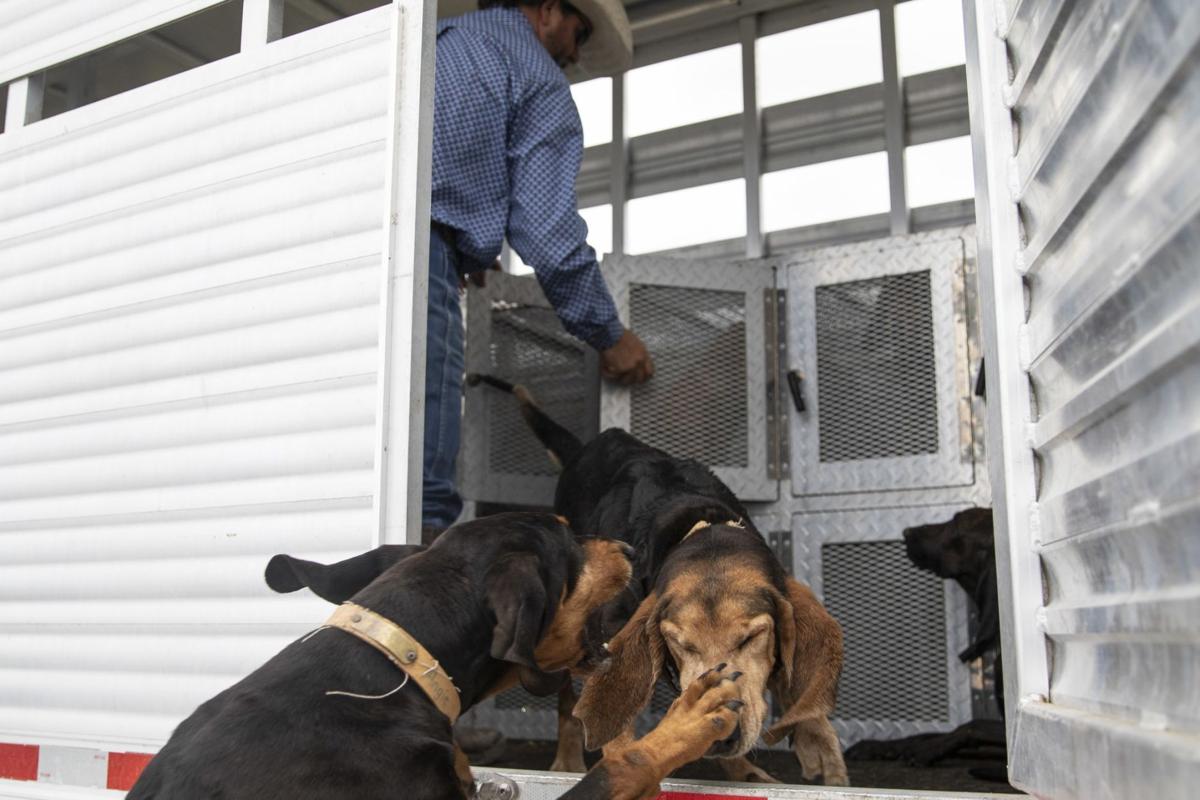 Joe Braman releases coonhounds from their kennels inside a horse trailer at the start of training. 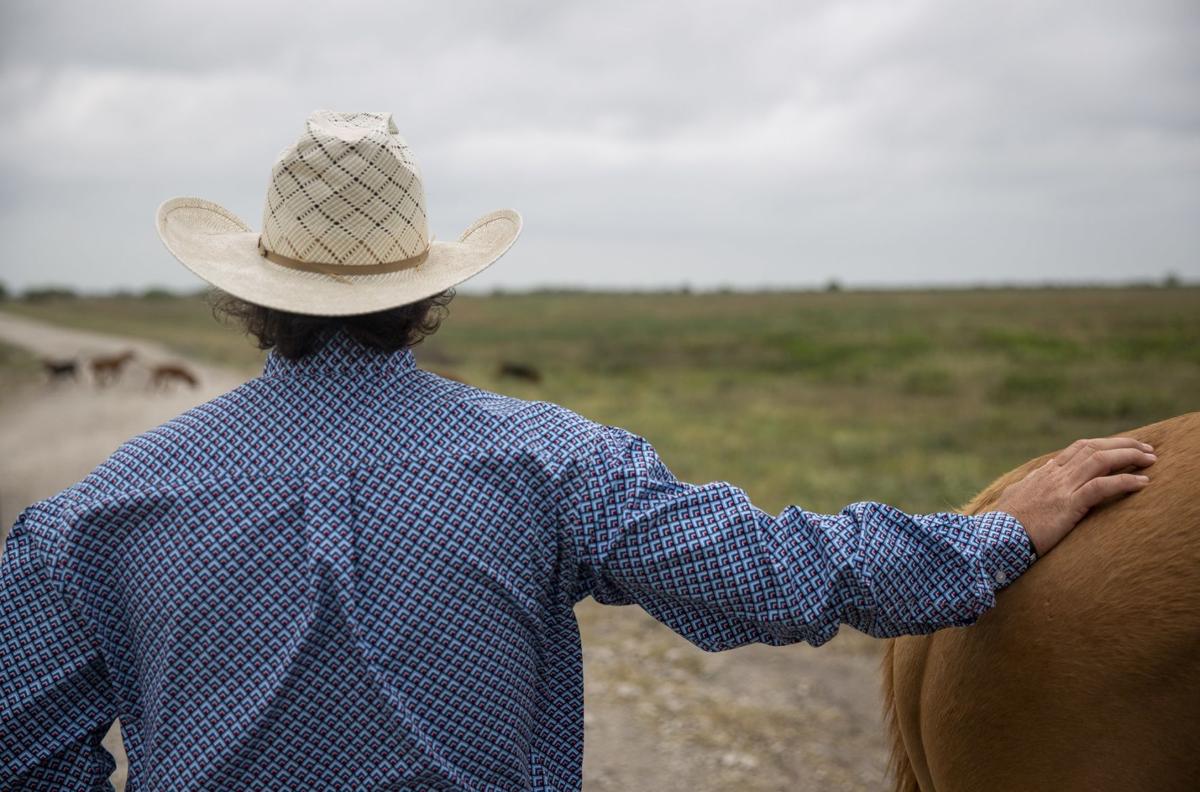 Joe Braman watches a pack of coonhounds in the distance. 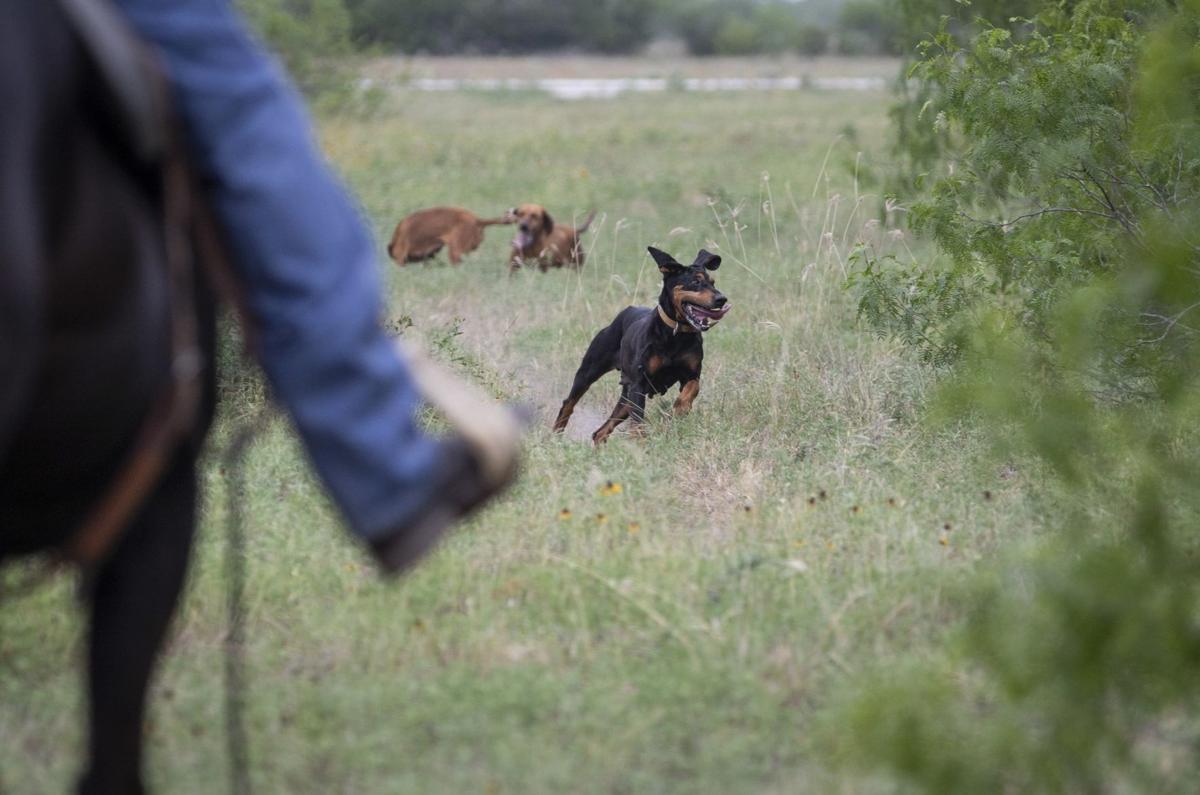 Esequiel “Zeke” Ortiz keeps his distance and allows coonhounds to search for a human decoy hiding in the brush. 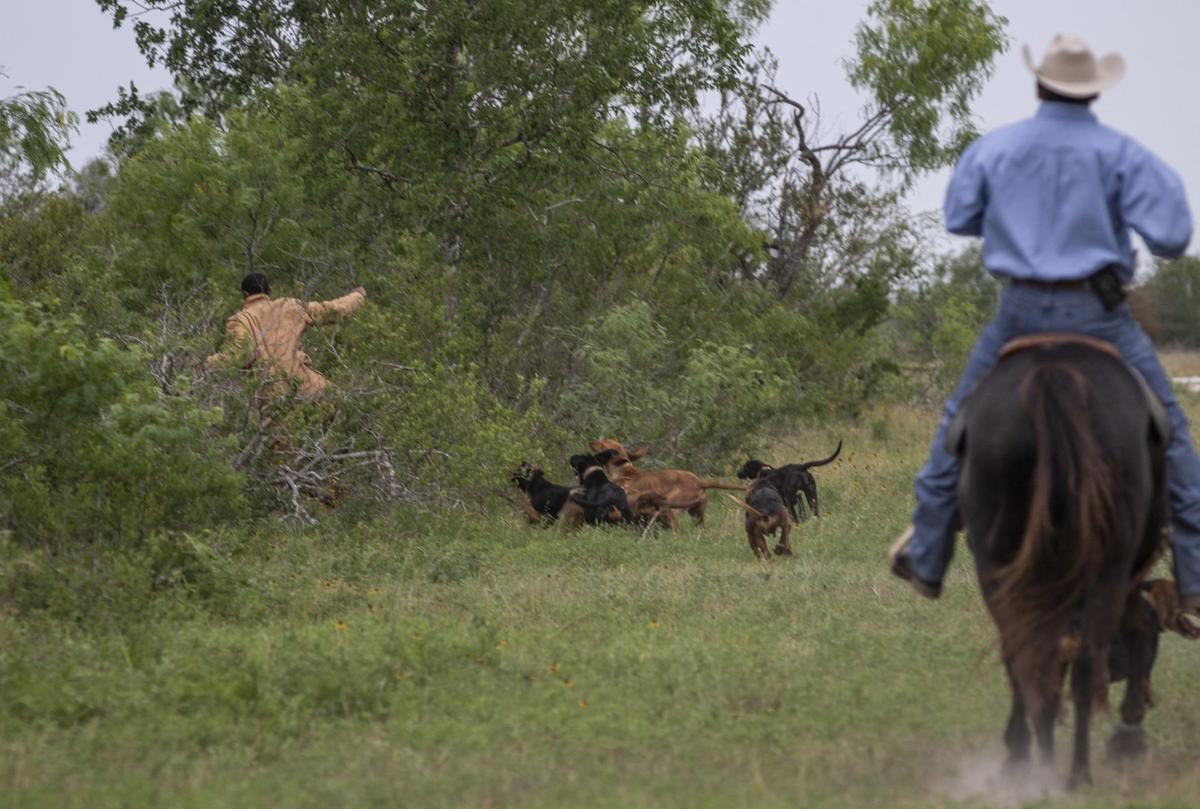 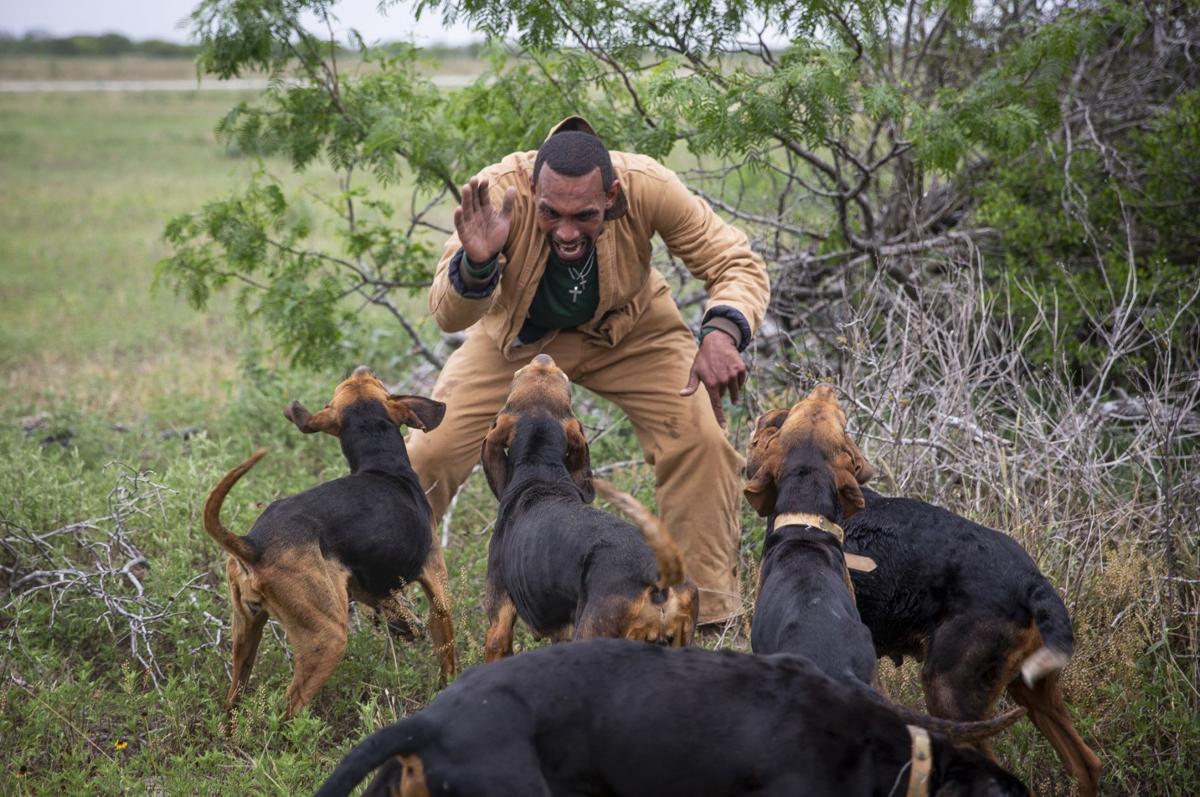 Decoy and dog trainer Fennis Green agitates or encourages a pack of coonhounds to bark and bite during training. 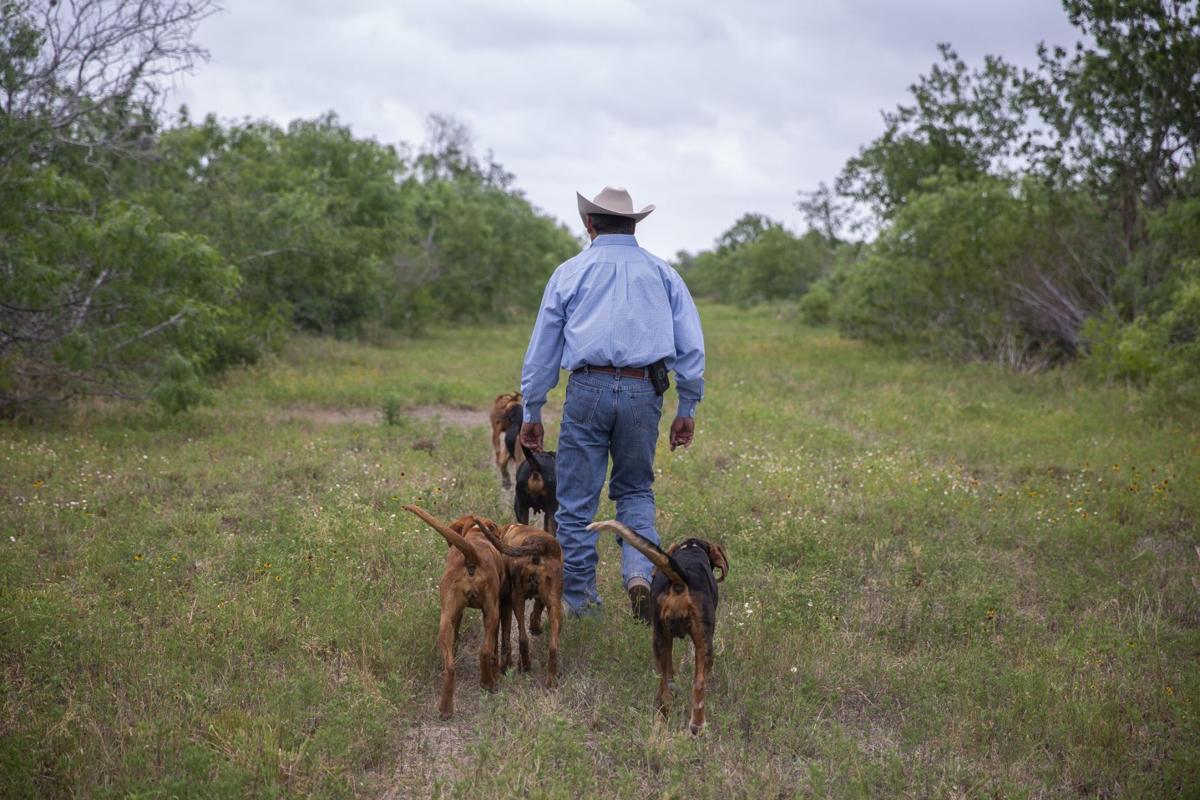 Tracking dog handler Esequiel “Zeke” Ortiz calls a pack of coonhounds off a human target during training in Refugio County. 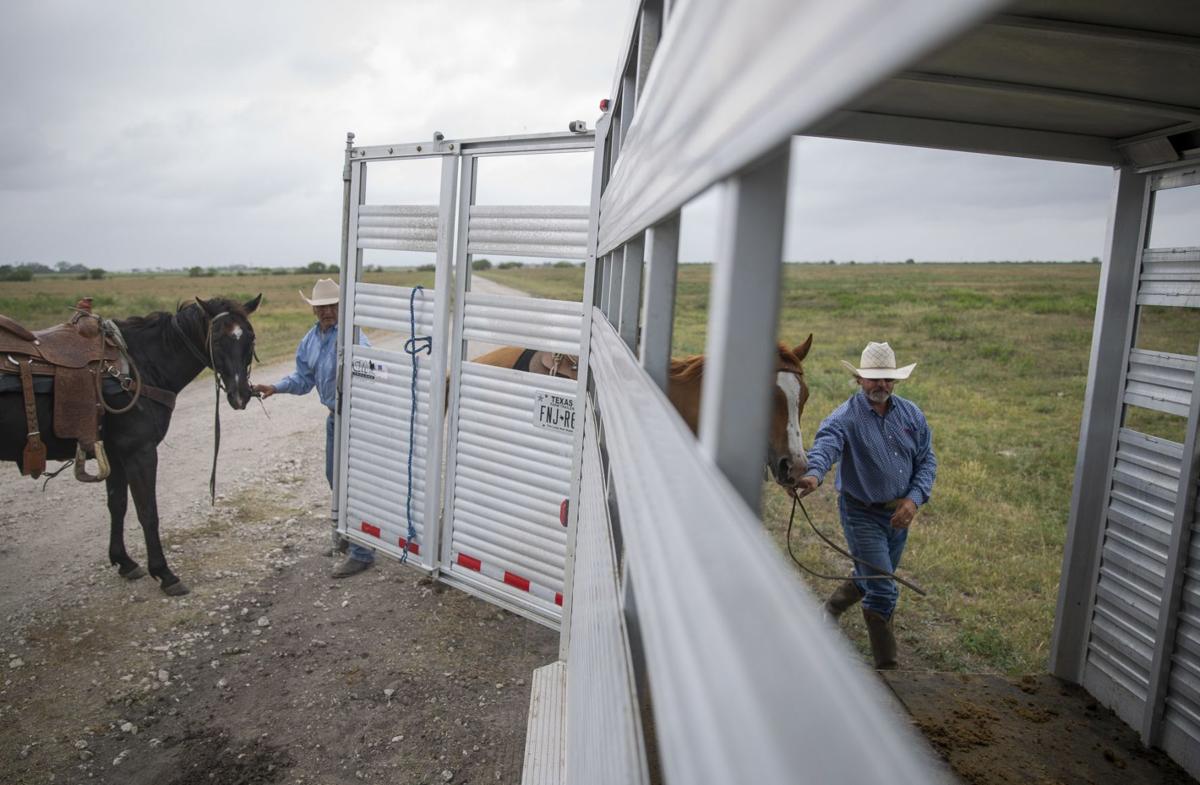 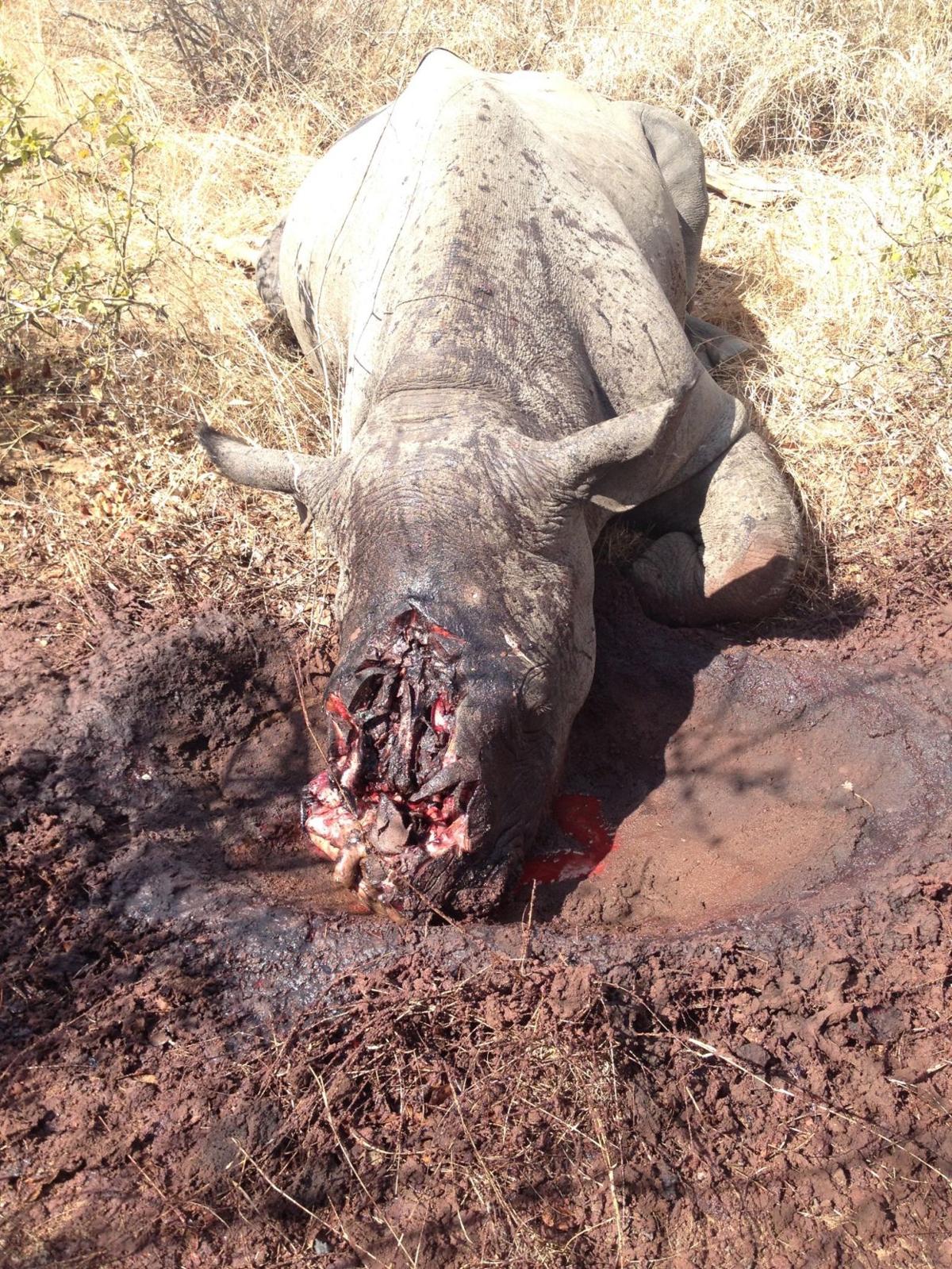 A rhino died after having its horn hacked off by poachers in South Africa.

A tracking coonhound looks through the screen of a kennel.

Joe Braman releases coonhounds from their kennels inside a horse trailer at the start of training.

Joe Braman watches a pack of coonhounds in the distance.

Esequiel “Zeke” Ortiz keeps his distance and allows coonhounds to search for a human decoy hiding in the brush.

Decoy and dog trainer Fennis Green agitates or encourages a pack of coonhounds to bark and bite during training.

Tracking dog handler Esequiel “Zeke” Ortiz calls a pack of coonhounds off a human target during training in Refugio County.

A rhino died after having its horn hacked off by poachers in South Africa.

REFUGIO — Joe Braman’s life changed forever last February as he stood in front of a large, gray and magnificent creature in South Africa.

The rhino, with its two horns at the front of its head and large sturdy body, almost looks like a creature from the distant past.

But what Braman saw in front of him was an animal on the brink of becoming a part of history.

The rhino he saw no longer had its trademark horns and was left barely breathing in the wild.

“Since then, there’s not a day that I don’t wake up thinking about those rhinos,” Braman, 45, said.

Braman, a Refugio rancher and businessman, has partnered up with a South African conservation alliance to help stop rhino poaching and bring back an animal population on the brink of extinction with the help of man’s best friend.

Though he’s trained coonhounds to hunt animals such as bobcats, mountain lions, and coyotes, Braman, with the help of retired K-9 handler and trainer Esequiel Ortiz, has trained 50 dogs to help hunt the most dangerous game — criminal poachers.

Ivan Carter, the founder of Ivan Carter Wildlife Conservation Alliance, said he has known Braman for several years. Carter said rhino poaching is one of the most terrible epidemics on the planet.

“With rhino horn becoming the most valuable commodity on Earth and rhinos having been poached to the brink of extinction, this is a topic of much conversation,” Carter said in an email.

In March, the last male northern white rhino died. The other subspecies of rhino, including the black rhino of South Africa, remain on the brink of extinction.

Rhino horns are mainly composed of protein keratin, the same protein found in human nails and hair. The horn, however, is highly valuable in Asian countries, Braman said, where the horn is said to be broken down and used as medicine.

According to a 2016 investigative report by National Geographic, the horn of a white rhino sells up to $3,000 a pound.

Because the horn is made of keratin protein, if shaved down, the horn will grow back.

But many rhinos don’t have the opportunity for their horns to grow back because some poachers extract the entire horn from their head, Braman said.

Carter said he has witnessed many terrible scenes of rhinos that were left mutilated for their horns. He reached out to Braman for his dog-training skills for what he believes will be a solution to end poaching.

Instead of tracking animals, the dogs will track poachers and bring them to justice.

“The ability for free running dogs to track a poacher that many hours old is a capacity we have never done before — this truly is the answer and the fact that these dogs have been trained not only to track man but to actually arrest a person makes them a unique tool that I think has the chance of changing the entire poaching landscape,” Carter said.

Braman traveled to South Africa to see the situation himself. In the month he was there, 15 rhinos had been poached, he said.

“I had no idea how severe the problem was until I saw it. It’s something that I, like most people, had heard of. But to see it up close — I wouldn’t have believed it if I hadn’t seen it,” Braman said.

Once Braman returned to the Crossroads, he got to work.

He spent months looking for the ideal canine candidates to send to South Africa. Out of 150 coonhounds, 50 have been in training for about a year to track poachers.

Training the dogs for the task has been a labor of love and duty, Braman said, and is what he now does full-time. Braman trains dogs from the early morning hours into the late night.

Ortiz, who has trained K-9 units to track suspects and criminals for the state of Texas, combined his knowledge with Braman.

“I didn’t think I’d be doing something like this, no. But I am glad I am,” Ortiz said.

Braman said Ortiz’s expertise has been invaluable to training the hounds.

“Animals are easier because they have habits and patterns. But people are unpredictable. You don’t know what a person will do,” Braman said.

Ortiz and Braman have laid thousands of tracking possibilities for the hounds on Braman’s Refugio County ranch, preparing the dogs day and night for just about any possibility they may face in their mission. The dogs are able to track human scent several hours old and miles out, Braman said.

The dogs, which will track in groups of up to 10, are also trained to take down a person. The hounds will have GPS tracking devices on them, so that once they have a poacher, law enforcement will be able to find the pack and arrest the poacher.

By deterring poachers, the hounds will be able to save more rhinos, Braman said.

“The way it’s going now, in a couple of generations, people will not be able to see a real rhino. If there’s something I can, or anyone else, can do, we should do it,” Braman said.

Challenges the dogs will face include the wildlife in South Africa, which can be any animal from a snake to packs of wild dogs to lions. Braman admitted he is also concerned that poachers may find a way to curb the dogs from stopping the lucrative trade.

He shakes off those concerns, though, and instead of worrying, trains the dogs harder.

The hounds are scheduled to fly to South Africa this summer, Braman said. He hopes to see rhino poaching go down and the number of rhino lives go back up.

“These hounds mean business. They will find you. Guaranteed,” Braman said.

Joe Braman and a solution for rhino poaching

To help support the anti-poaching coonhounds, donate to The Raindrop Initiative.

Two trained search dogs from Refugio were strangled Saturday by a man whom law enforcement officers were chasing near Holiday Beach, authoriti…

Have you been to a COVID-19 testing site in the Crossroads?