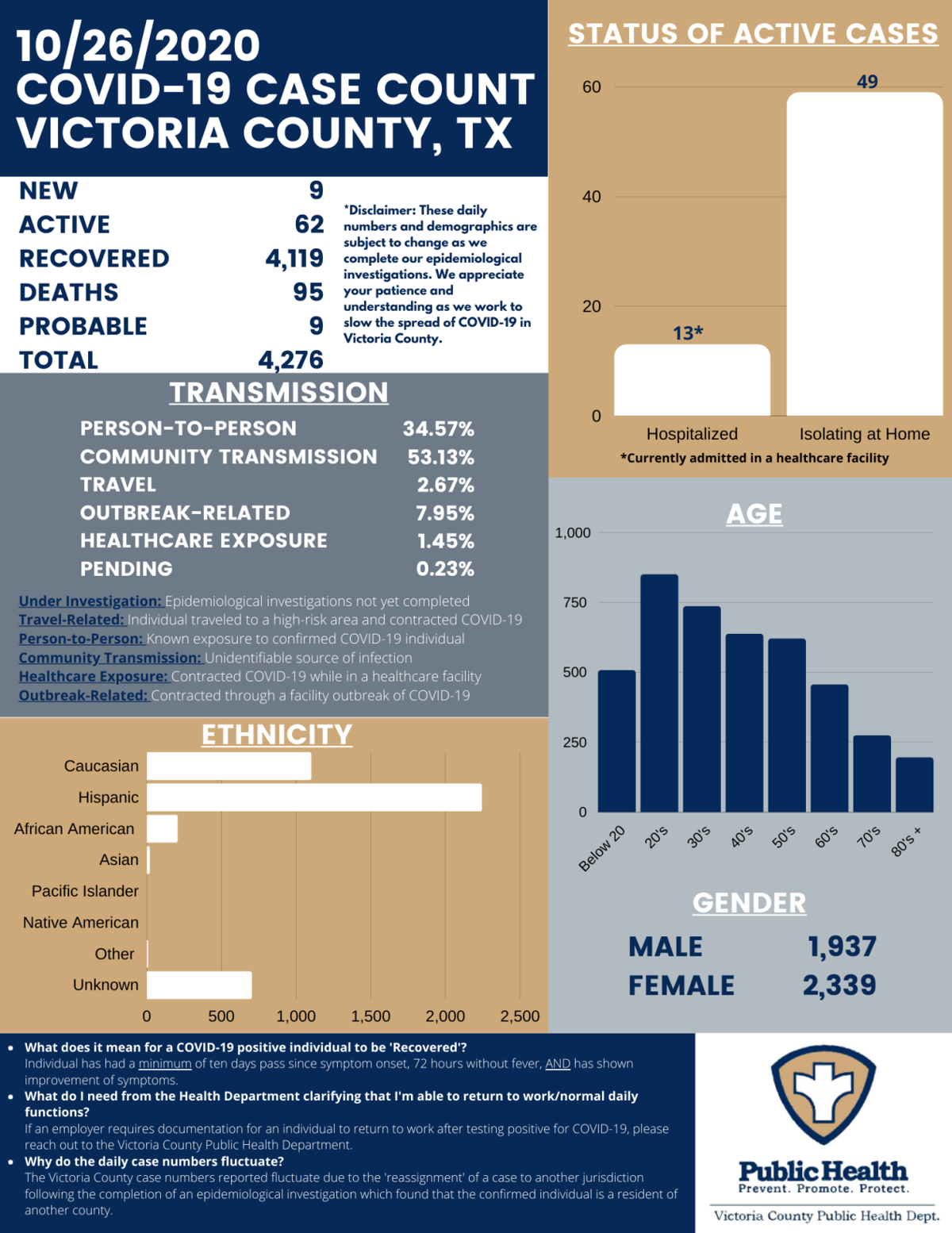 There are 62 currently active cases of COVID-19 in Victoria County as of Monday, Oct. 26, local officials said. 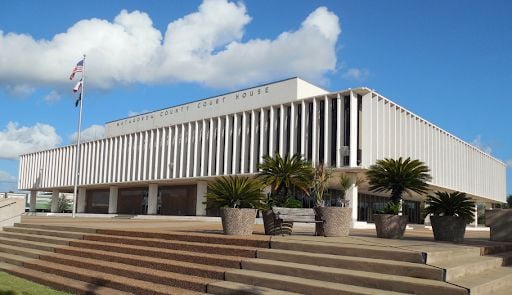 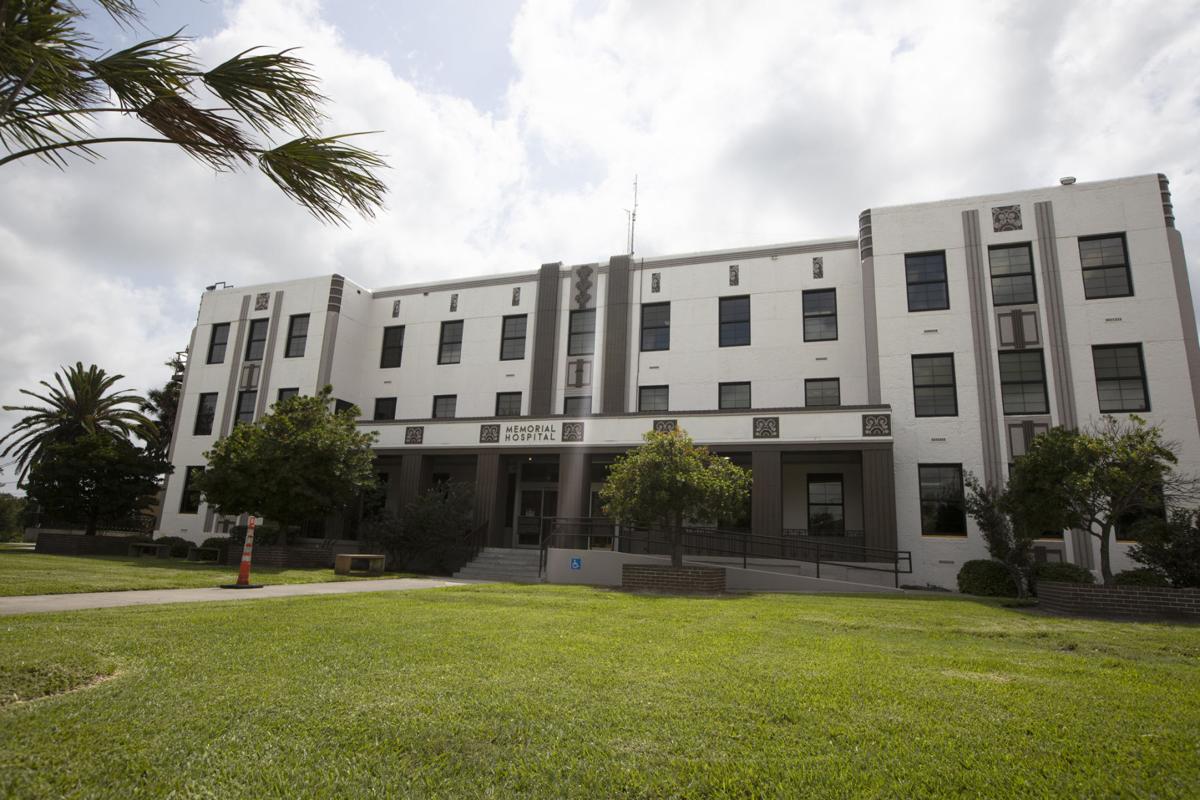 There are 62 currently active cases of COVID-19 in Victoria County as of Monday, Oct. 26, local officials said.

Although COVID-19 hospitalizations continue to rise statewide, the number of serious cases in the Crossroads continues to stay relatively steady for now.

As of Monday evening, there were at least 5,278 COVID-19 patients in hospitals throughout the state, which is more than the state has seen in almost two months, according to state health department data. Although cases continue to rise statewide, there were still only 25 COVID-19 patients Victoria-area hospitals on Monday, according to state data. These 25 patients were occupying less than 5% of the total number of beds in Trauma Service Area S, which covers DeWitt, Calhoun, Victoria, Goliad, Lavaca, and Jackson counties.

It’s unclear whether cases will begin to rise in the Crossroads region in the coming days and weeks. It can take several days or more after a person has been infected with the virus before they start showing symptoms, and many days after that before they get sick enough to require hospital care.

Of the 4,276 total cases diagnosed in the county, there are 4,119 patients who have recovered. There are 95 county residents who have died from complications of the virus.

As of Monday evening, there were 62 county residents with active infections of the respiratory disease.

Six new cases of COVID-19 and one new death related to the disease have been reported in Matagorda County, according to state data.

The new cases include a man and a woman in their 30s and a woman in her 50s, according to a Monday news release. The three residents are currently isolating.

The cases bring the county’s total to 309 reported cases with 289 recovered. Of those infected, 16 have died.

The Wharton County Office of Emergency Management reported one new confirmed case of COVID-19 on Monday.

The county also reported four new recoveries and no new deaths related to the disease. The total confirmed case count is 1,506, total recovered is 1,421 and total deaths remains at 47.

El Campo leads the county with 773 confirmed cases, followed by Wharton with 482, East Bernard with 132 and the remainder in unincorporated areas.

Twelve new COVID-19 cases have been confirmed in Goliad County, according to state data.

In all, 212 county residents have been infected with the respiratory disease since the pandemic began, and an estimated 202 have recovered, according to state data.

Just one new case of COVID-19 was confirmed in Calhoun County, although the county’s overall total increased to 942 cases, according to the county’s office of emergency management. These increases sometimes happen when backlogged cases are added to the county’s total after the patients have already recovered.

Of 942 total cases, an estimated 929 patients have recovered. There are eight county residents who have died from complications of the virus.

There are three new cases of COVID-19 in Jackson County as of Monday, according to Public Health Region 8 of the state health department.

Of 649 total cases, an estimated 628 patients have recovered. There are seven county residents who have died from complications of the virus.

One new case of COVID-19 was confirmed in DeWitt County Monday, and the county’s overall tally was adjusted to remove duplicate cases, local officials said.

A total of 1,020 cases have been diagnosed in the county since the start of the pandemic. There were 29 cases confirmed to be duplicates, and 10 cases in which the patients were determined to live in a different county. Such errors typically happen when test results are received from Yoakum and the patient lives in Lavaca County, according to local officials.

The updated number of cases is 981, according to the news release. Of those, 935 patients have recovered. There are 54 county residents who have died from complications of the virus.

The news release also noted that two previous statements from county officials about COVID-19 deaths were not correct.

“County officials made statements about the categorizing of two unrelated deaths into COVID-19 deaths on September 28 and October 19 and subsequently found the information to be false,” according to the news release. “Officials apologize for the confusion this inadvertent error caused in the community and will strive to make sure all information communicated to the public in the future is factual and proven.”

DeWitt County officials had previously identified multiple deaths as being classified as COVID-19 deaths simply because the deceased had died within 90 days of becoming infected with the virus.

In an Oct. 19 release, DeWitt County officials said a death was being classified as a COVID death because “state health department accounting rules require deaths to be counted as COVID-19–related if the recovered individual dies for any reason, including accidents, within 90 days of his or her recovery from COVID-19.”

This is not true. The state health department classifies a death as caused by the virus only when a death certificate lists COVID-19 as a direct cause of death.

Lavaca County did not publish a COVID-19 update Monday.

Do you know someone with Lyme disease?