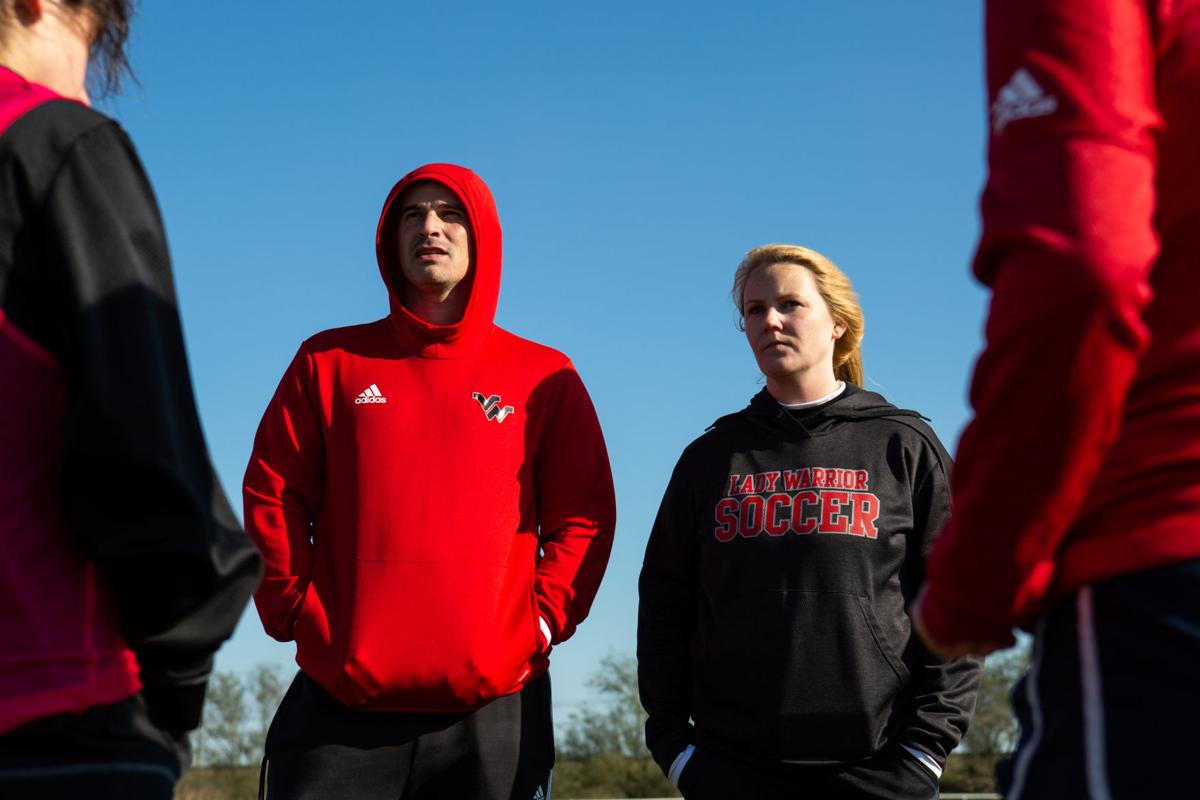 Courtney and Jon Stoltenberg talk to their team in a huddle during a practice at Victoria West High School. 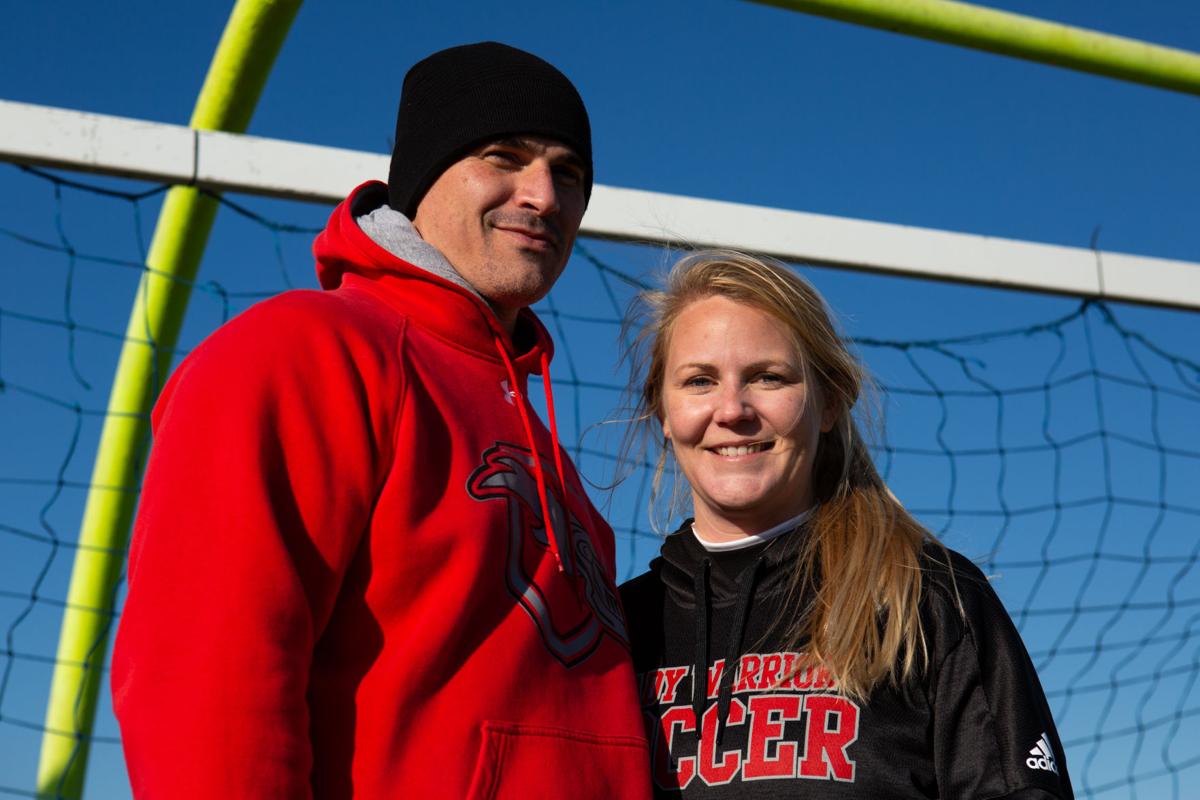 Portrait of Jon and Courtney Stoltenberg on the practice soccer field behind Victoria West High School. 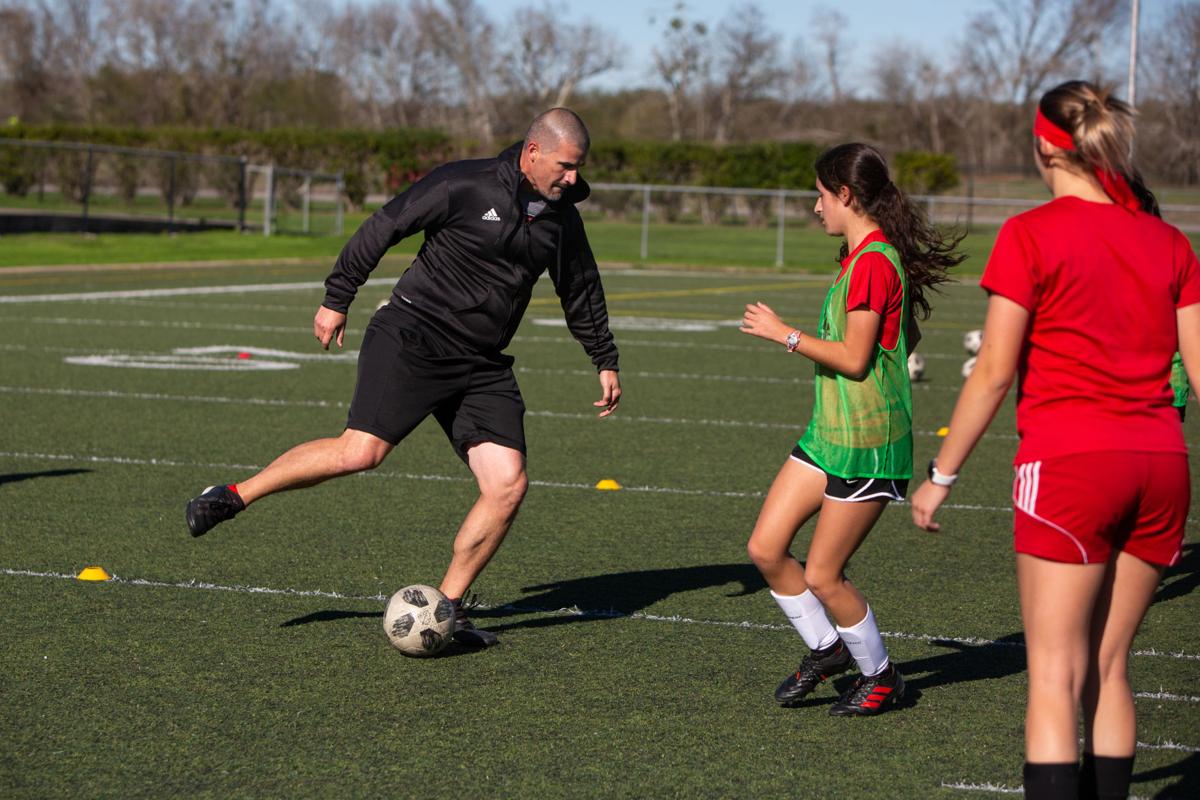 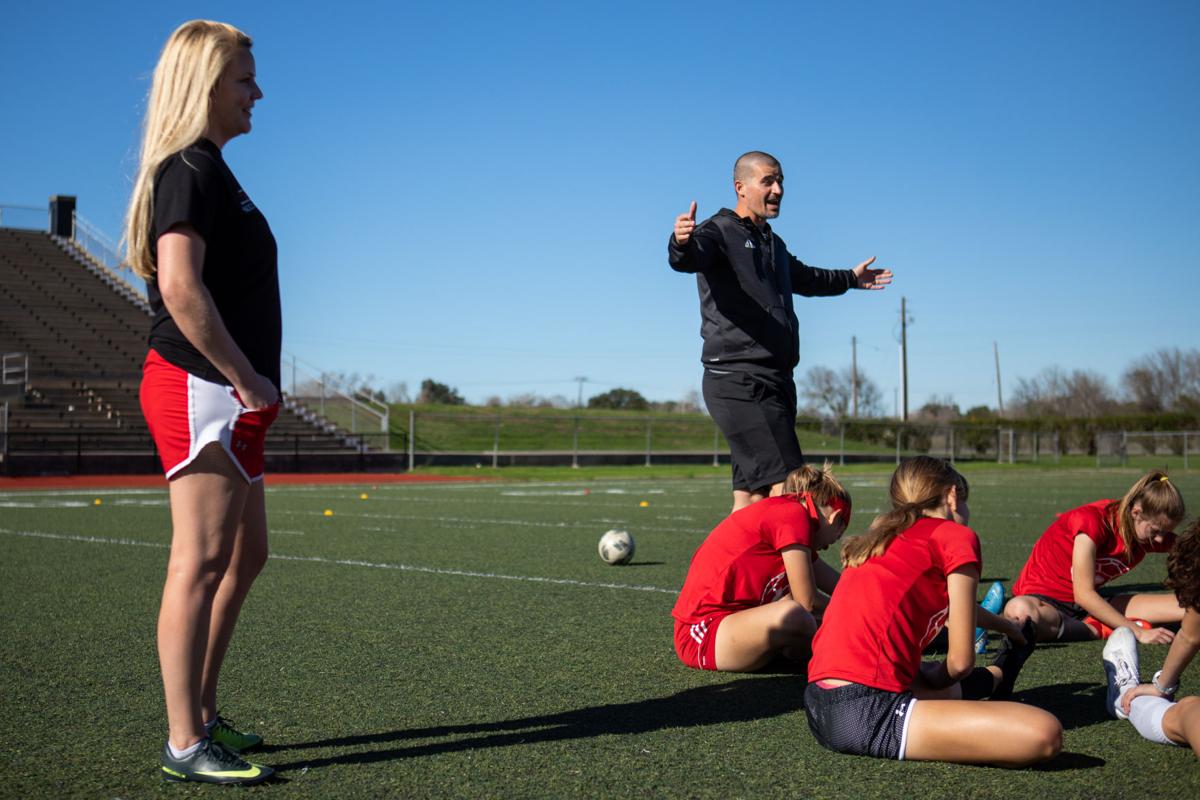 Courtney and Jon Stoltenberg talk to their players as they stretch during a practice at Memorial Stadium. 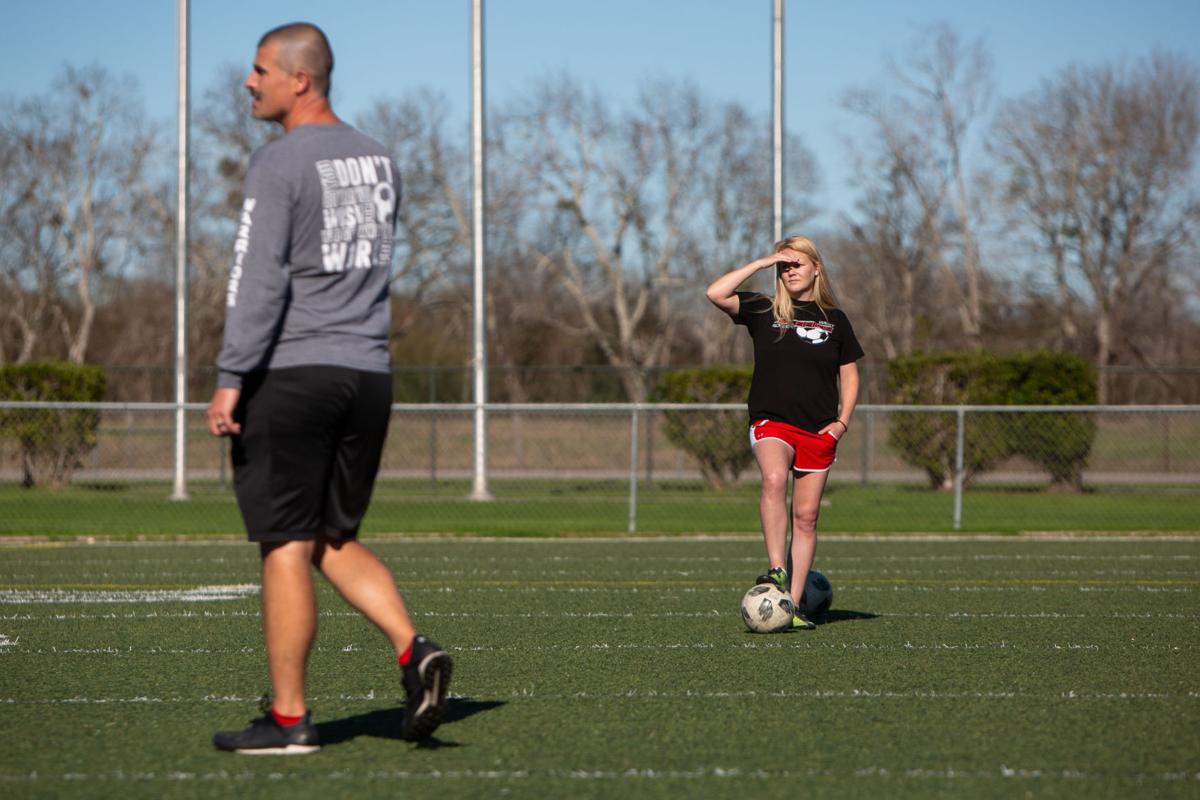 Courtney Stoltenberg coaches from the side as her soccer players practice drills. 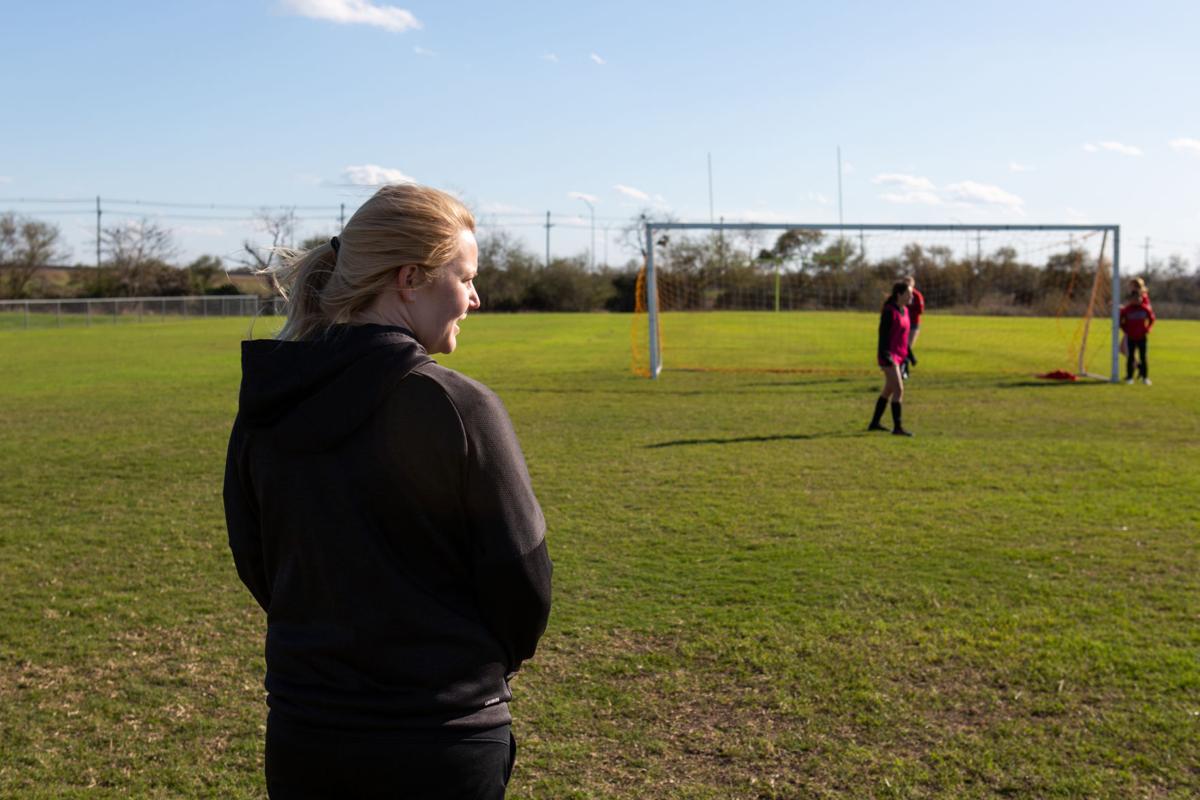 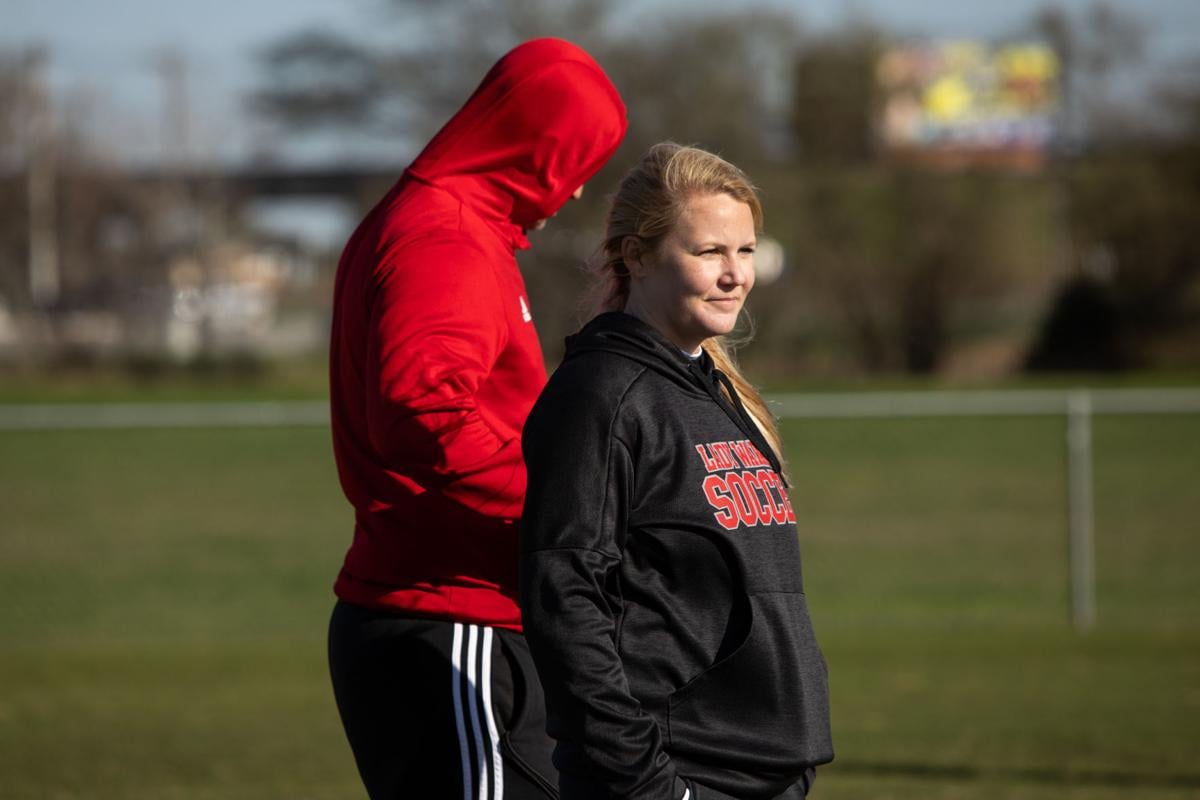 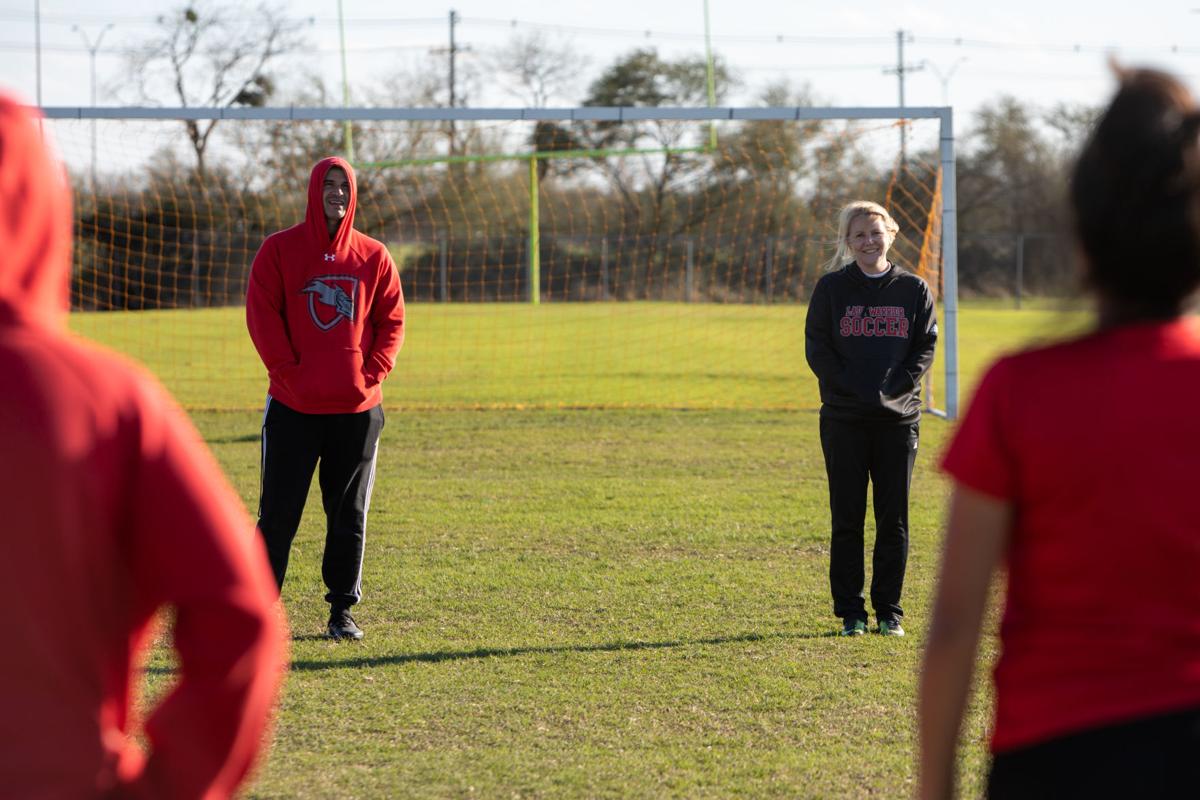 Courtney and Jon Stoltenberg give their players instructions for a conditioning "game" at the end of one of their practices at Victoria West High School. 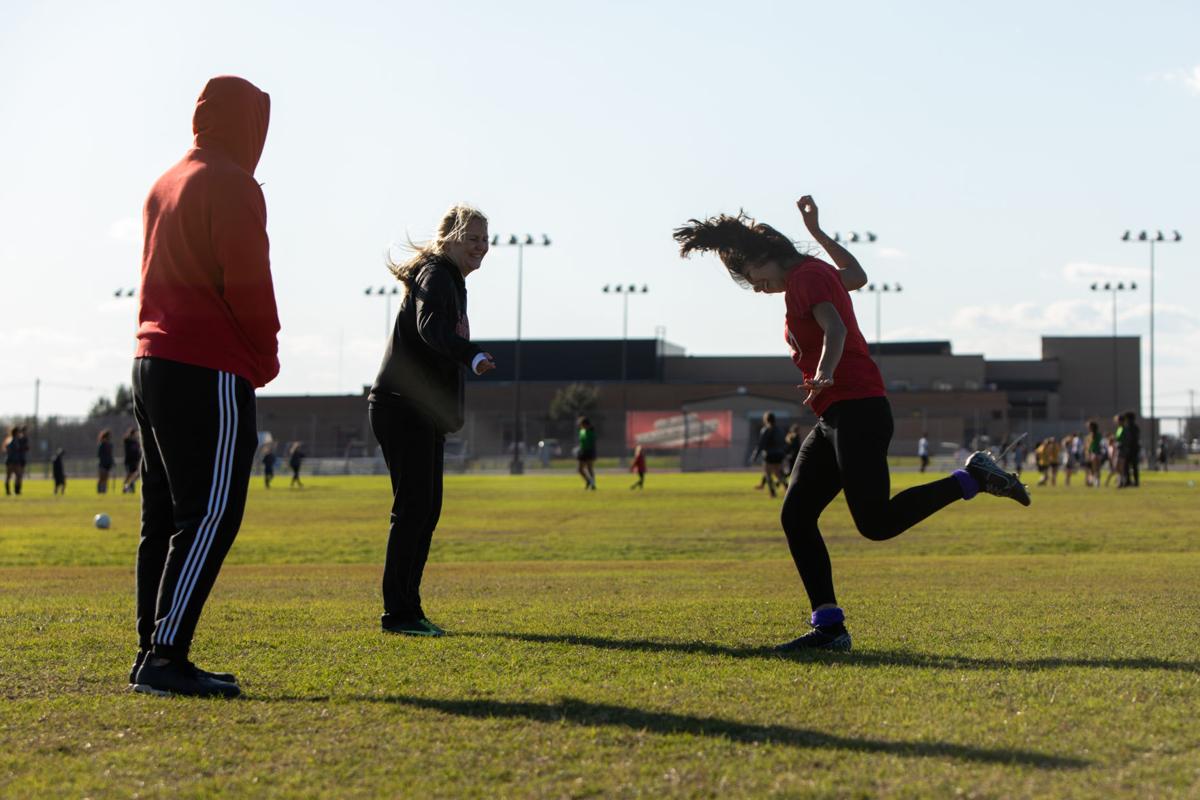 Courtney and Jon Stoltenberg laugh at their players during a conditioning "game" at the end of one of their practices at Victoria West High School.

Courtney and Jon Stoltenberg talk to their team in a huddle during a practice at Victoria West High School.

Portrait of Jon and Courtney Stoltenberg on the practice soccer field behind Victoria West High School.

Courtney and Jon Stoltenberg talk to their players as they stretch during a practice at Memorial Stadium.

Courtney Stoltenberg coaches from the side as her soccer players practice drills.

Courtney and Jon Stoltenberg give their players instructions for a conditioning "game" at the end of one of their practices at Victoria West High School.

Courtney and Jon Stoltenberg laugh at their players during a conditioning "game" at the end of one of their practices at Victoria West High School.

Jon Stoltenberg did not expect to meet his future wife at Victoria West’s teacher orientation when he came to Victoria as a new teacher.

During the get-to-know-you ice breakers, the teachers were doing an activity where they had to write some things about themselves and then find someone to ask about what they wrote. One of the questions was “What would be your dream job if you weren’t a teacher?” to which Jon answered “a professional poker player.”

When he went to share his answers with another teacher, he was surprised to discover something funny.

“We were talking and she was looking at my cards and said, ‘Oh, that’s so weird. Courtney wrote down the same thing,’” he said, laughing.

Fast forward six-and-a-half years and Courtney and Jon Stoltenberg are now partners on and off the soccer field as head and assistant coaches, respectively, for the Victoria West girls soccer team. They will celebrate their third wedding anniversary in July and their daughter Charlie’s second birthday in September.

Jon, 38, originally from Brenham, and Courtney, 30, from Jacksonville, Fla., started teaching at Victoria West in 2013. They befriended a few other new teachers who were around their ages and after about a month of hanging out, Jon and Courtney started dating.

“Our first date was watching college football at Buffalo Wild Wings and I knew then, ‘this girl’s a good catch,’” Jon said. “She was watching Florida State, and I was watching Texas A&M and after that I thought, ‘Alright, I gotta make sure I don’t mess this one up.’”

“I really liked him,” she said. “We got along really well right off the bat. It’s been easy.”

Jon and Courtney have a mutual love of sports and similar past experiences with soccer. They both played when they were young up through high school and intermittently as adults, but neither had coached soccer.

Courtney moved to Victoria to teach and fell into coaching soccer when she was offered the position to coach the girls’ junior varsity team at the beginning of her second year teaching.

Jon started voluntarily showing up for practice to help because he wanted to be considered for the next opening.

They said their coaching styles and personalities complement each other.

“He’s definitely more defensive-minded, I’m more offensive,” Courtney said. “He’s the louder one, I’m the one that can bring it to the side. It really works for us.”

“Her patience is way higher than mine, which is really good,” Jon said as Courtney laughed. “It’s what allows our marriage to work and what allows our coaching relationship to work as well.”

During practices when the girls are working on different drills, Jon will often hop in and play with them, while Courtney coaches from the side.

“They can work off of each other and I know they spend a lot of time talking about soccer at home,” said Vanessa Oubre, a junior at Victoria West and captain of the soccer team. She has played soccer since she was 4 and has been coached by Courtney and Jon for the past three years.

Jon and Courtney want to increase interest and participation in soccer in Victoria, a region where football is king.

“I have dreams of competing at the state level,” Jon said. “We go to tournaments and we see other teams and we see where programs can be and that’s where we want to be able to get to our program.”

Courtney said they often get freshman girls who are adamant about playing soccer but have never played before. And there’s only so much their program can do in four years.

She and Jon said they have been working with Misty Boenig, head coach of the girls soccer team at Victoria East, to get area middle schools interested in implementing soccer programs.

“If we can get to the middle school level, and then, eventually, even younger than that and build it from there, I think we’ll be able to compete at a higher level,” Courtney said.

While Jon and Courtney are serious about the game and in improving the soccer program, they also try to have fun with their players and illustrate to them that they care.

At the end of a cold and windy practice one day, Jon asked the girls to line up in front of the goal for some conditioning, but he turned it into a little game.

“Give me 20 jumping jacks,” he shouted. The girls raced to finish. Then they were instructed to sprint toward the coaches, the first to reach them would be the “winner.”

“Now, say the ABC’s backwards!” he instructed. The girls laughed as they tried, then gave up and ran toward their coaches.

“The chemistry whenever we’re playing together is always there,” Vanessa said. “We’re communicating and all having a fun time at our games or our practices.”