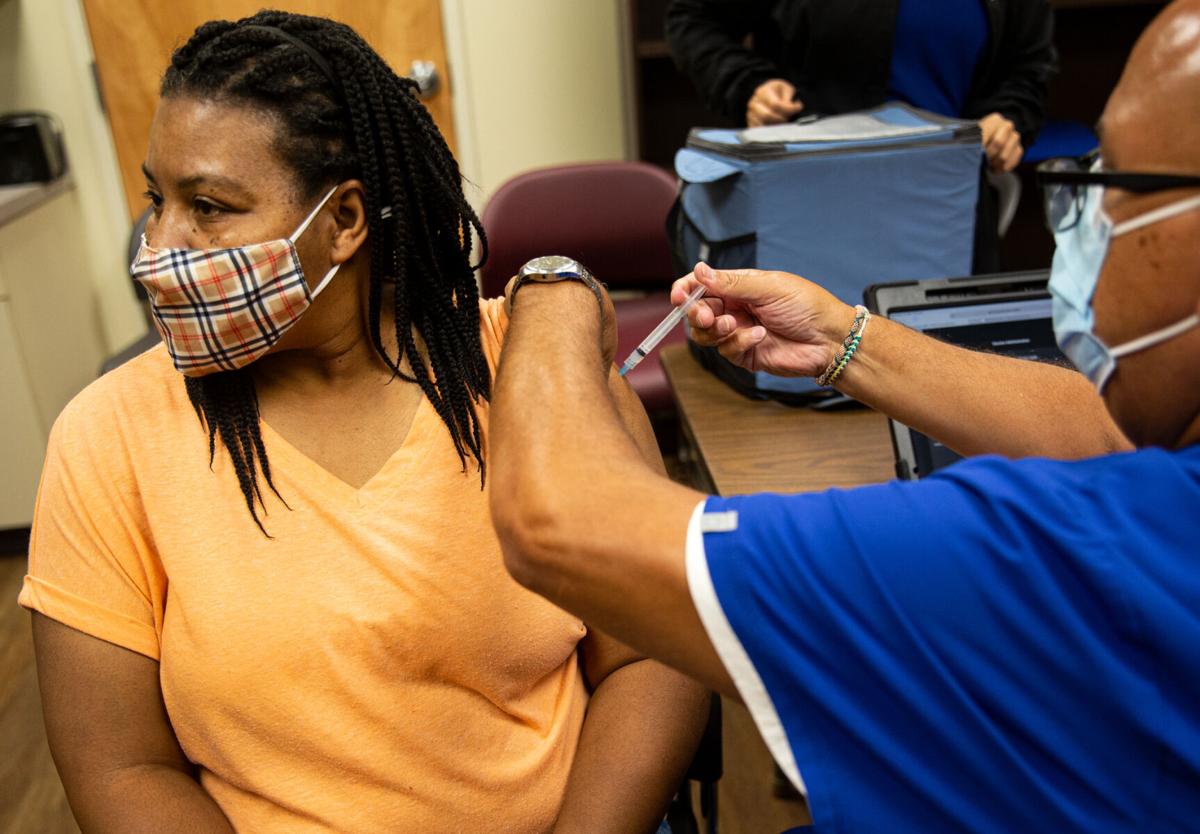 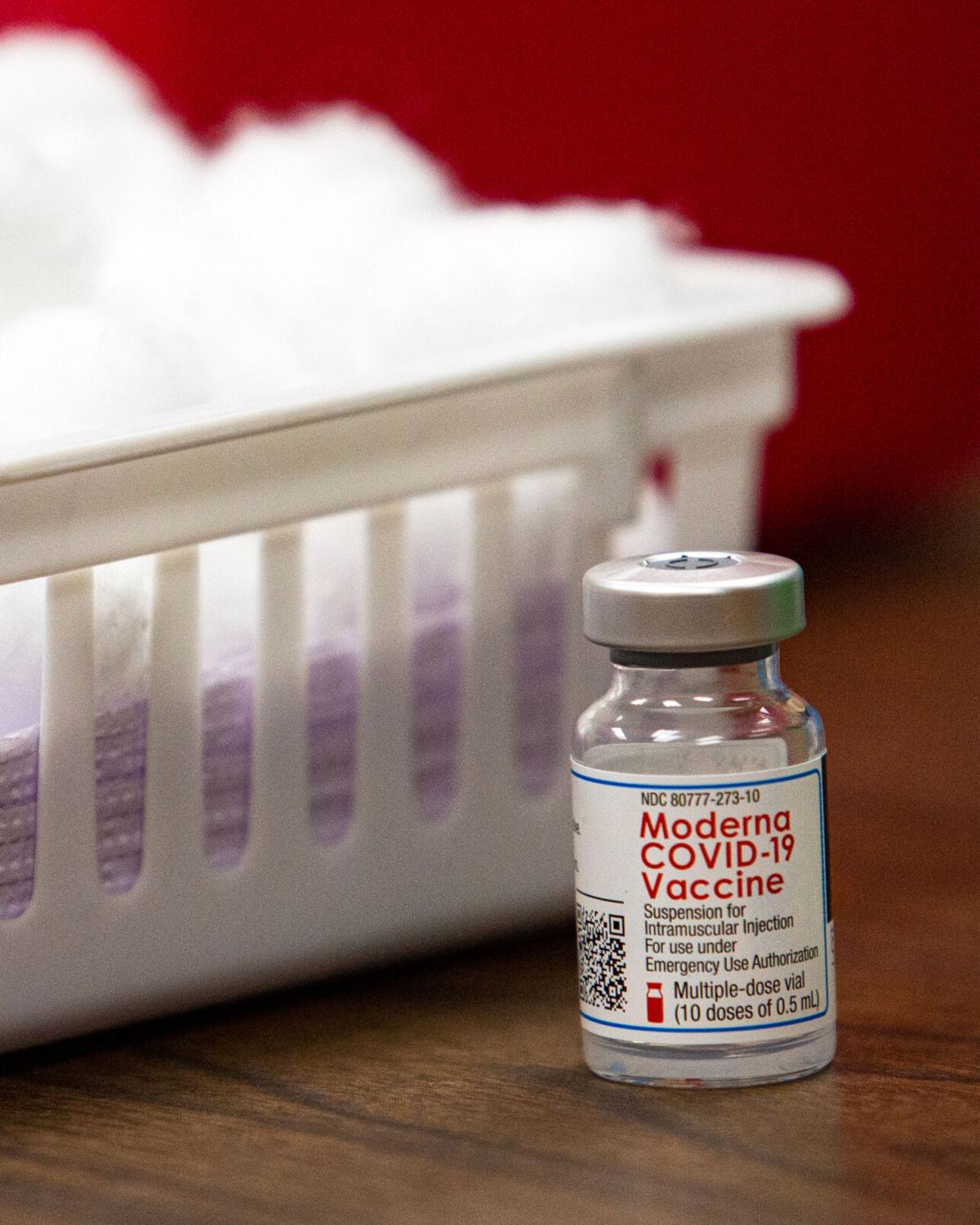 A vial of the COVID-19 vaccine lies on a table inside of the Dr. Pattie Dodson Public Health Center. 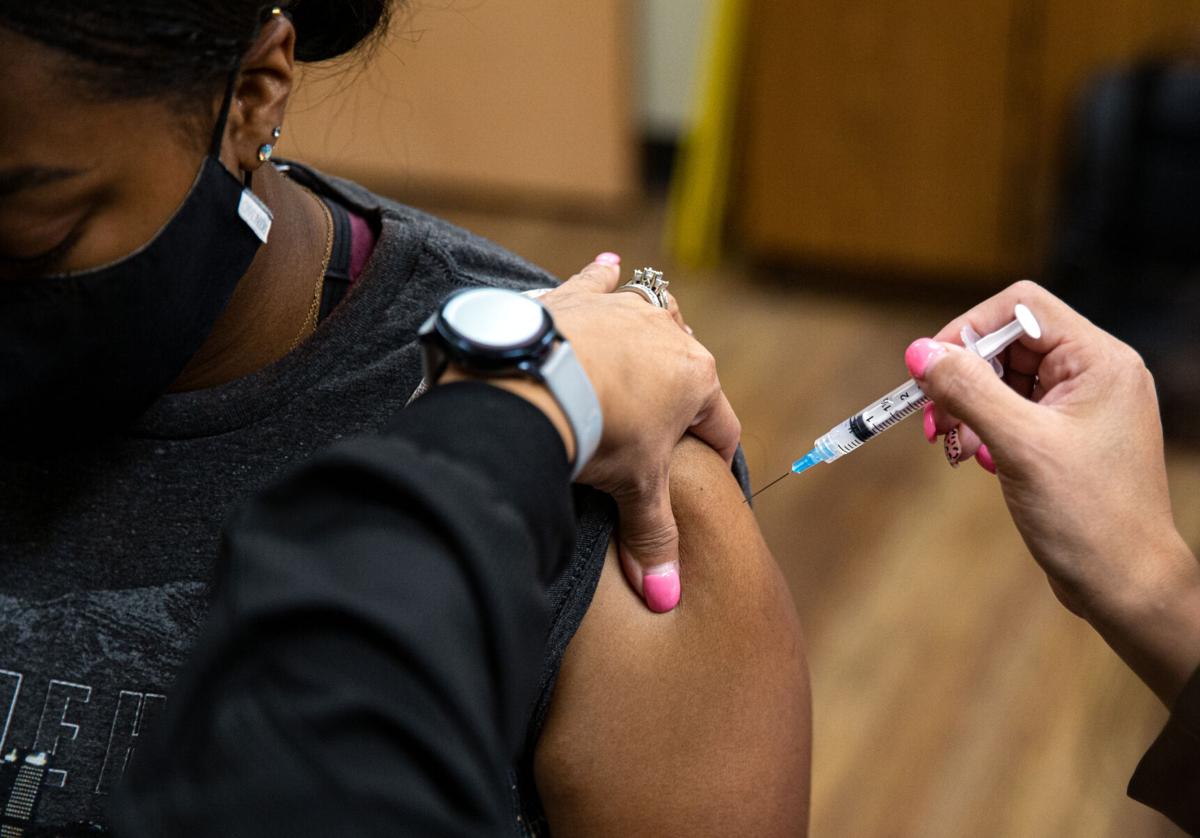 Paris Breaux gets her COVID-19 vaccine shot administered on Tuesday inside of the Dr. Pattie Dodson Public Health Center. 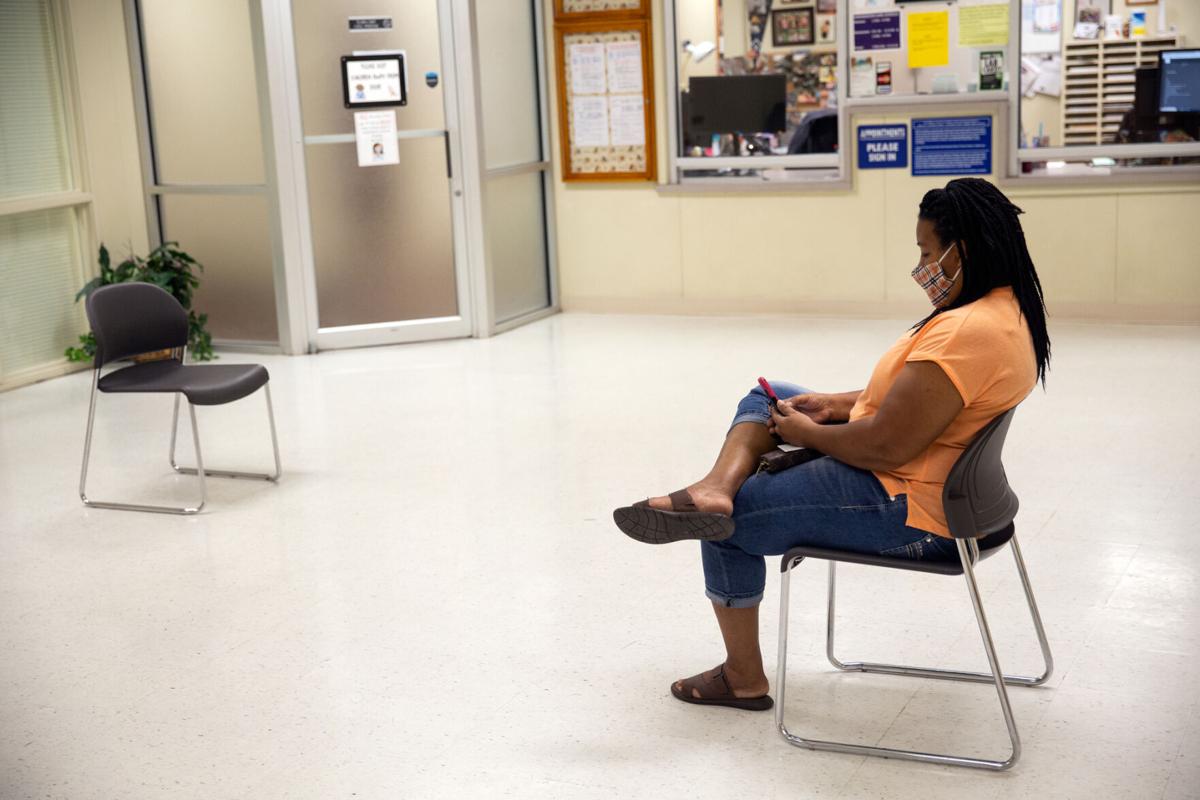 Sharon Girdy sits and wait for 15 minutes after getting her COVID-19 vaccine. 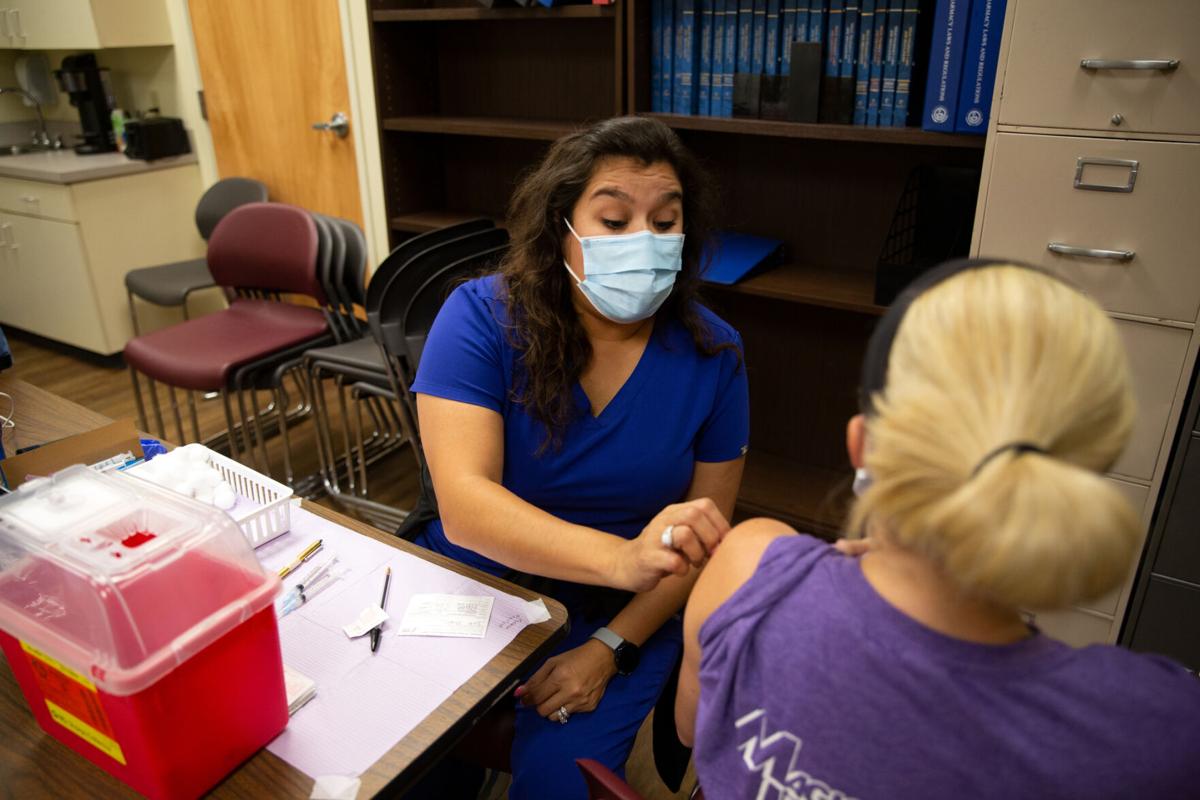 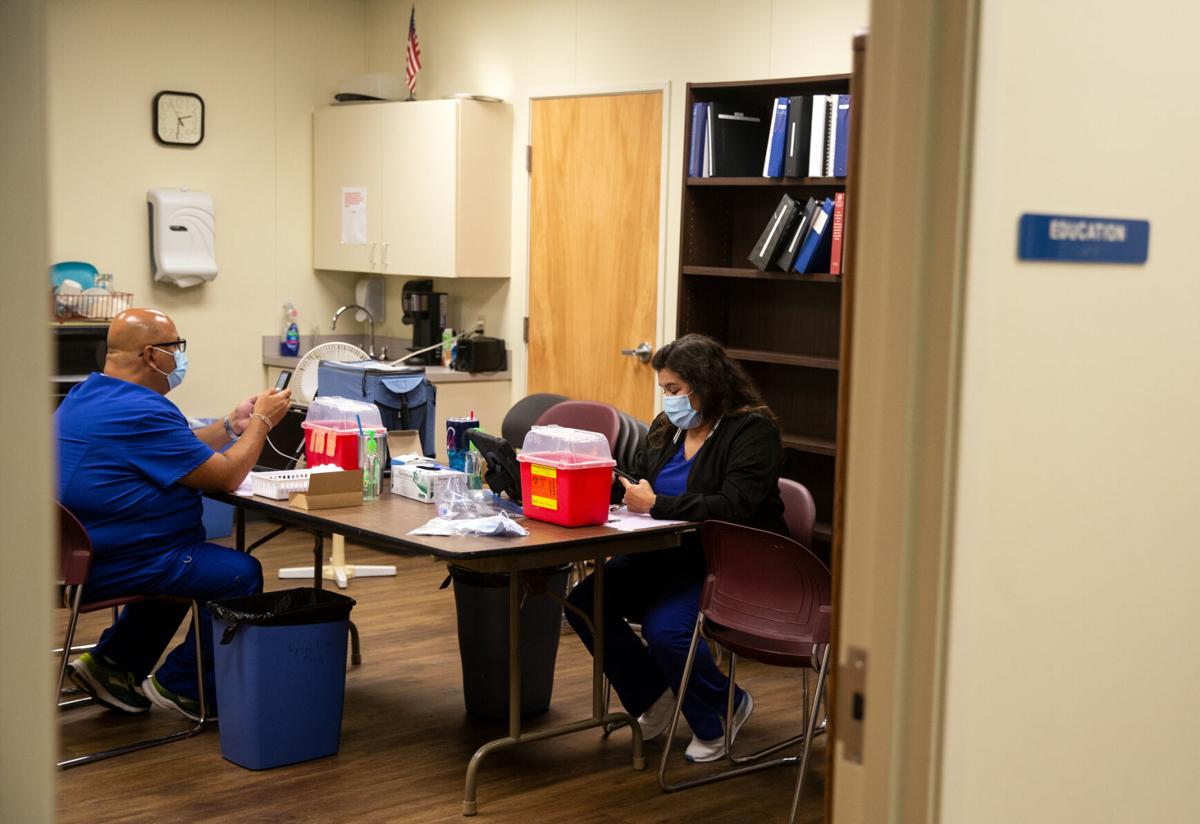 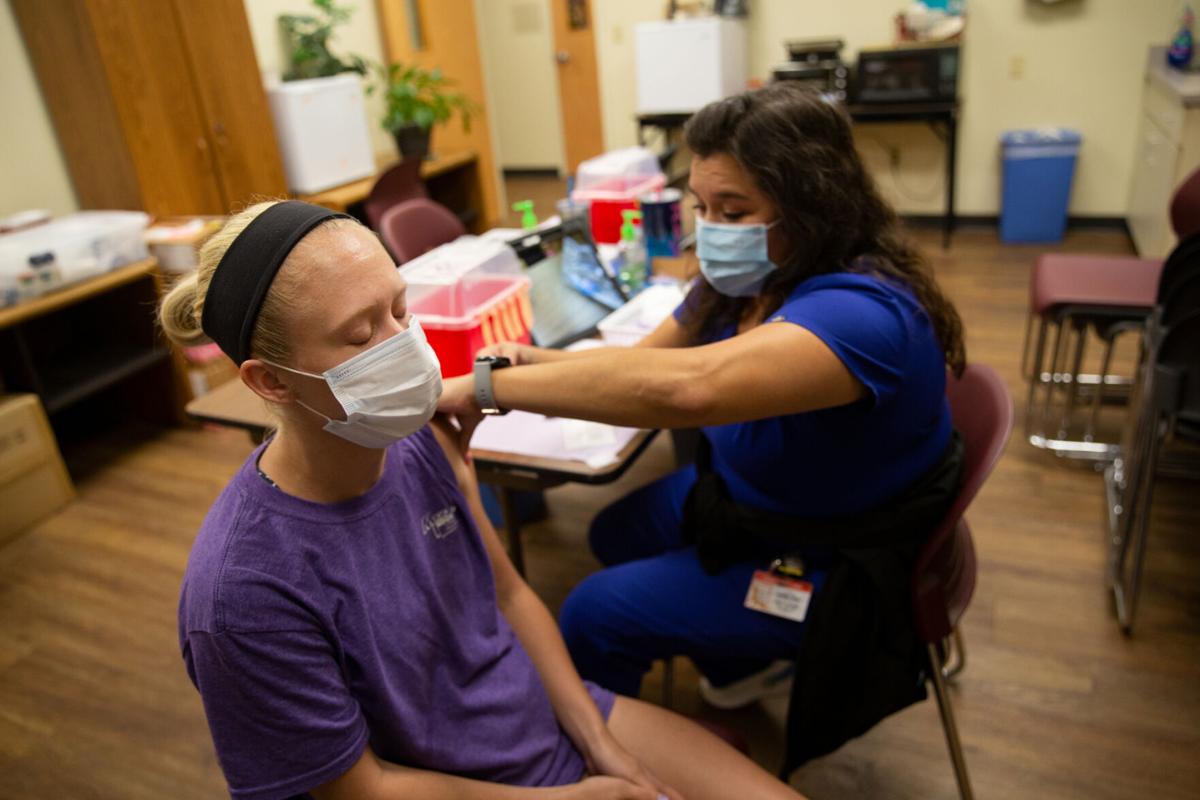 A vial of the COVID-19 vaccine lies on a table inside of the Dr. Pattie Dodson Public Health Center.

Paris Breaux gets her COVID-19 vaccine shot administered on Tuesday inside of the Dr. Pattie Dodson Public Health Center.

Sharon Girdy sits and wait for 15 minutes after getting her COVID-19 vaccine.

Kelly Alexander, 40, nervously entered a backroom at the Victoria County Public Health Department to receive her first dose of the COVID-19 Moderna vaccine on Tuesday.

“You should be more nervous walking around without the vaccine,” said Maribel Rojas, the registered nurse who administered Alexander’s vaccine.

Alexander was one of over 50 residents who signed up to receive vaccines at the health department’s weekly vaccine clinic Tuesday. The clinic has been administering about 30 vaccines a week, said DiAnna Harris, the nurse manager at the Victoria County Public Health Department, but this week saw a slight uptick in appointments.

The past few weeks have also seen an increase in new COVID-19 cases across the state and Crossroads, according to data from the Texas Department of State Health Services.

Victoria County reported about 150 new COVID-19 cases this week. Across the entire nine-county Crossroads area, nearly 280 new cases were reported for the same time period. While the numbers are not as high as those seen during this time last year, where as many as 222 new cases were reported in a single day in Victoria County alone, the current rise in cases is “absolutely concerning,” said David Gonzales, the county’s public health director.

“Right now is critical,” said Gonzales. “We look at trends, and the trends are all going in the wrong direction.”

Across the state, a sharp increase in hospitalizations has occurred since early July, according to a report from The Texas Tribune. On Tuesday, the hospitalization rate for COVID-19 patients in Victoria’s trauma service area was nearly 10%, compared to 7% a week ago. A few months ago in March, the hospitalization was as low as 3% one week.

Last year, Gov. Greg Abbott created a system where restrictions were increased if more than 15% of a region’s hospital beds were occupied by COVID-19 patients. However, Abbott has expressed reticence to enact any new restrictions to fight the virus, despite the rising number of COVID-19 cases.

During a news conference last week, Abbott said it was “past the time for government mandates” and instead emphasized “personal responsibility.”

Although they are watching hospitalization rates, Gonzales said there’s little they can do locally when it comes to implementing any kind of restrictions. In May, Abbott signed an executive order that prohibited governmental entities from mandating “face coverings or restricting activities” in response to the pandemic.

The best advice Gonzales said he could give residents is to get vaccinated.

“That is our only defense. Until we get a large majority of the population vaccinated, we’re still going to be dealing with this,” he said.

As of Tuesday, only about 43% of Victoria County adults 12 and older were fully vaccinated. DeWitt, Goliad, Jackson, Lavaca and Matagorda counties all have even lower vaccination rates. While you can still get COVID-19 after being vaccinated, said Gonzales, the vaccine significantly reduces the severity of the illness and transmission rates.

Of the nearly 9,000 people who have died in Texas from COVID-19 since early February, all but 43 were unvaccinated, according to preliminary data provided by the Department of State Health Services, The Texas Tribune reported. That means only 0.5% of Texas COVID-19 deaths were the result of “breakthrough infections,” or infections found in people who are fully vaccinated. At Citizens Medical Center in Victoria, roughly 90% of those hospitalized with COVID-19 are unvaccinated, said Dr. Daniel Cano, chief medical officer at the hospital.

On Tuesday, the U.S. Centers for Disease Control and Prevention released new guidelines, recommending fully vaccinated people to wear a mask in public indoor settings in regions of “substantial or high transmission.”

Even vaccinated people should be doing what they can to reduce the spread of COVID-19, said Chris Bird, an associate professor at Texas A&M University — Corpus Christi and leader of the Informatics and Modeling Team, which served on the Coastal Bend COVID task force.

“As an evolutionary biologist, my biggest concern with the pandemic at this point is trying to stop it from evolving so fast,” he said. Even if you’re vaccinated, he said, you should wear a mask in grocery stores and other indoor public spaces.

“I know it’s somewhat of an inconvenience, but a bigger inconvenience would be some variant past the delta variant that the vaccines don’t work against. That’s what we want to avoid,” he said.

“(A virus’s) whole reason for being is to mutate and find more hosts. That’s all they want to do,” said Dr. Leilani Valdes, medical director of Regional Pathology Associates in Victoria.

The delta variant, which is more infectious than past variants, now accounts for most new COVID-19 infections in Texas and 83% of cases nationwide, according to the Texas Department of State Health Services. The variant is also affecting younger people, some of whom are getting seriously ill, said Valdes.

“What we worry about is as the virus mutates and finds more hosts in the younger and younger, unvaccinated populations, we might see a really severe mutation populate our pediatric population,” said Valdes. “And then all of a sudden it goes from high morbidity and mortality in the elderly population to something affecting kids.”

Gonzales said one of his main concerns is making sure the county is able to reduce the spread of COVID-19 before schools begin in August.

“Luckily, the school staff did a great job last year, and parents and students as well in keeping those numbers down relatively low,” said Gonzales. “But we really need to get these numbers lower before we get to that point of bringing those kiddos together in a school environment.”

While we have to take measures to reduce the spread of the virus, Bird said, he doesn’t think people need to stop leaving their homes.

“At this point we understand the dynamics of everything and how to live during these uncommon times,” he said. “You want to go about your life as best as you can, just sometimes put on a mask.”

This was “due to the increase in case counts and us wanting to be mindful of the health of the attendees and our public safety personnel,” Brogger said.

“What I’m going to be pushing for is for people to get vaccinated,” Bauknight said.

The Victoria County Public Health Department offers vaccine appointments every Tuesday. Only the Moderna vaccine is offered at these clinics.

Those interested in receiving the Pfizer vaccine, including children 12 or older, can sign up for the county's next clinic in August.

On Monday, the hospitalization rate for COVID-19 patients in Victoria’s trauma service area was 9.68%, according to the state health departmen…

According to the Texas Tribune, only 35.4% of Victoria County is vaccinated. I'm going to trust their figures ahead of what the Advocate has published.

I wish we had a report of vaccination related deaths alongside COVID-19 deaths. This might help right-wingers who insist on making vaccination a political point understand what’s killing us.