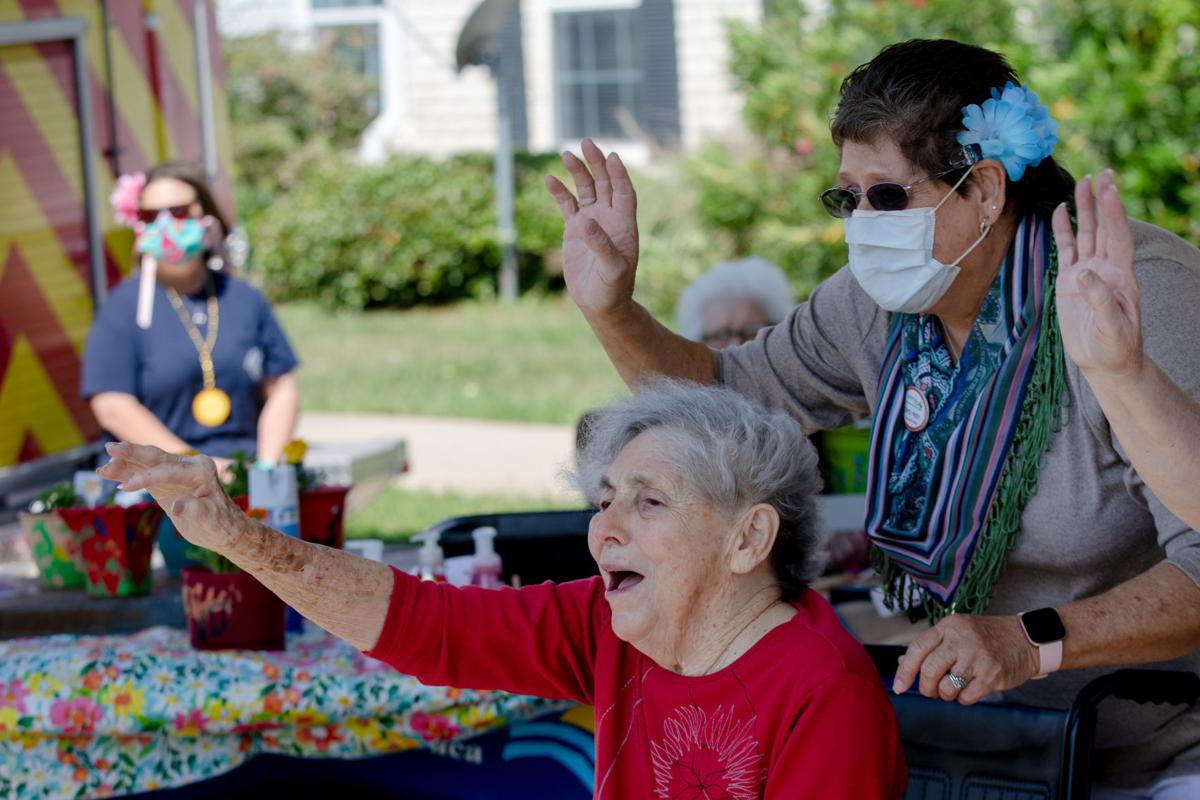 Naomi Novosad, in a red shirt, waves at her daughter’s family with Betty Medlin, executive director at Trinity Shores of Port Lavaca, 201 Trinity Shores Drive. Novosad’s daughter, Nancy Buffaloe came Saturday with her children, who showed their love with bubbles, signs and balloons from their car. “We miss her badly,” Buffaloe said. Residents’ loved ones and community members were handed a note, cookies, hand soap and scrubs along with a flower pot that residents and staff painted. 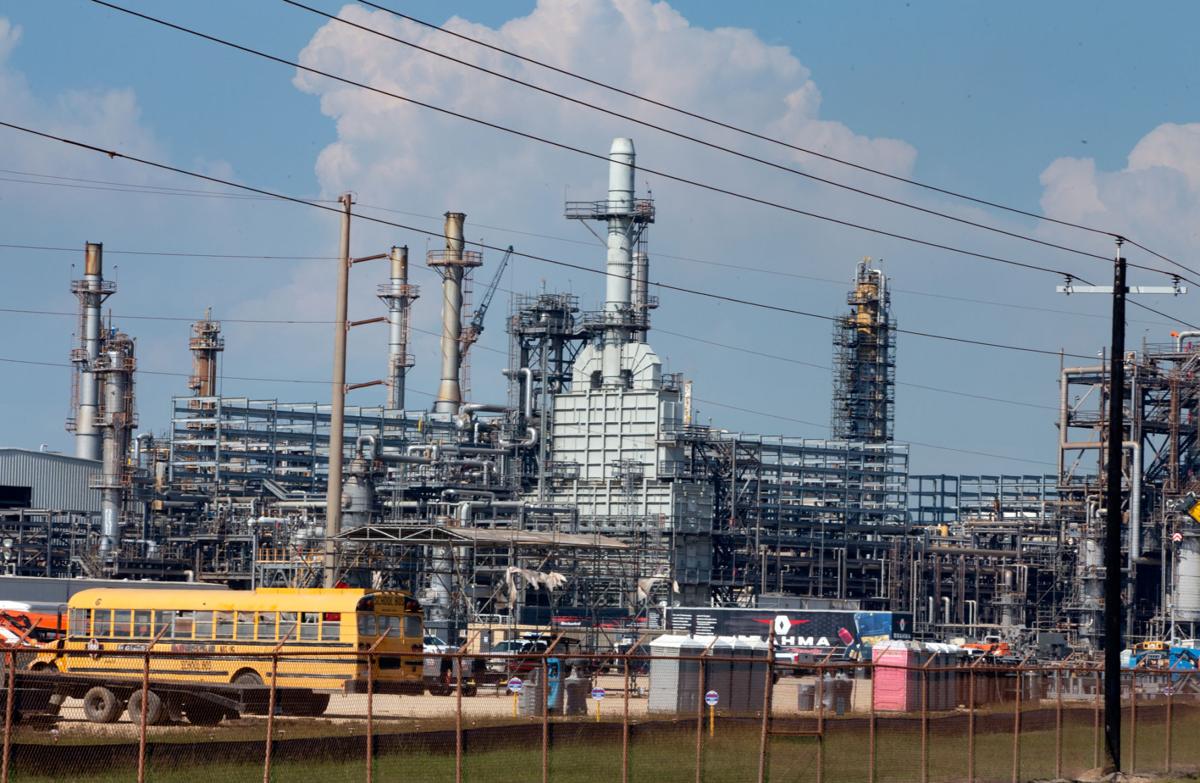 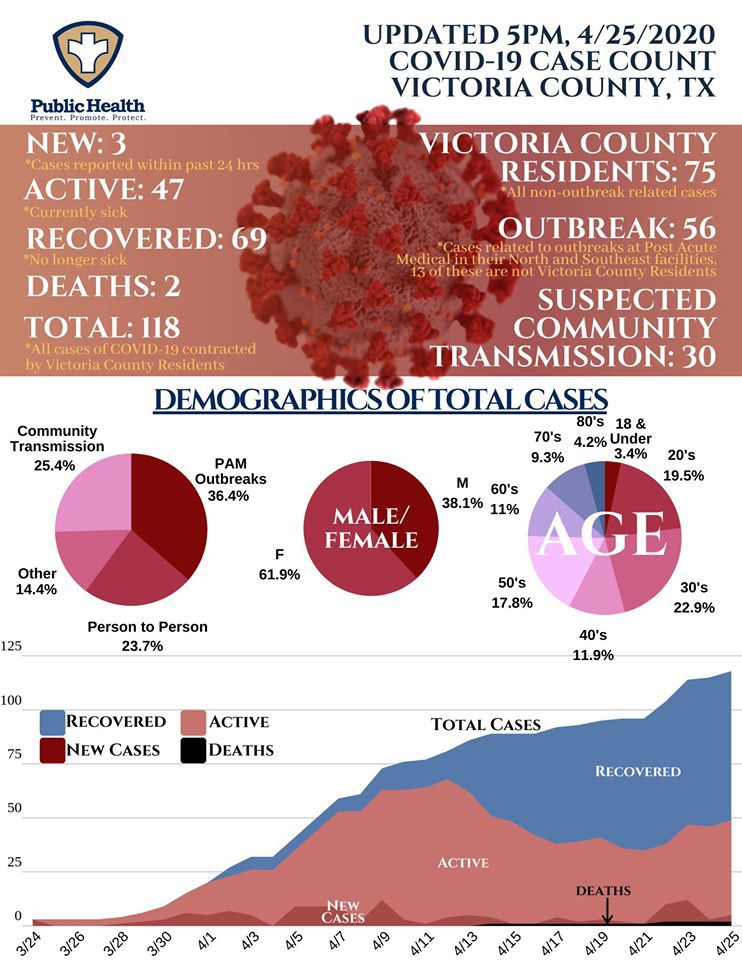 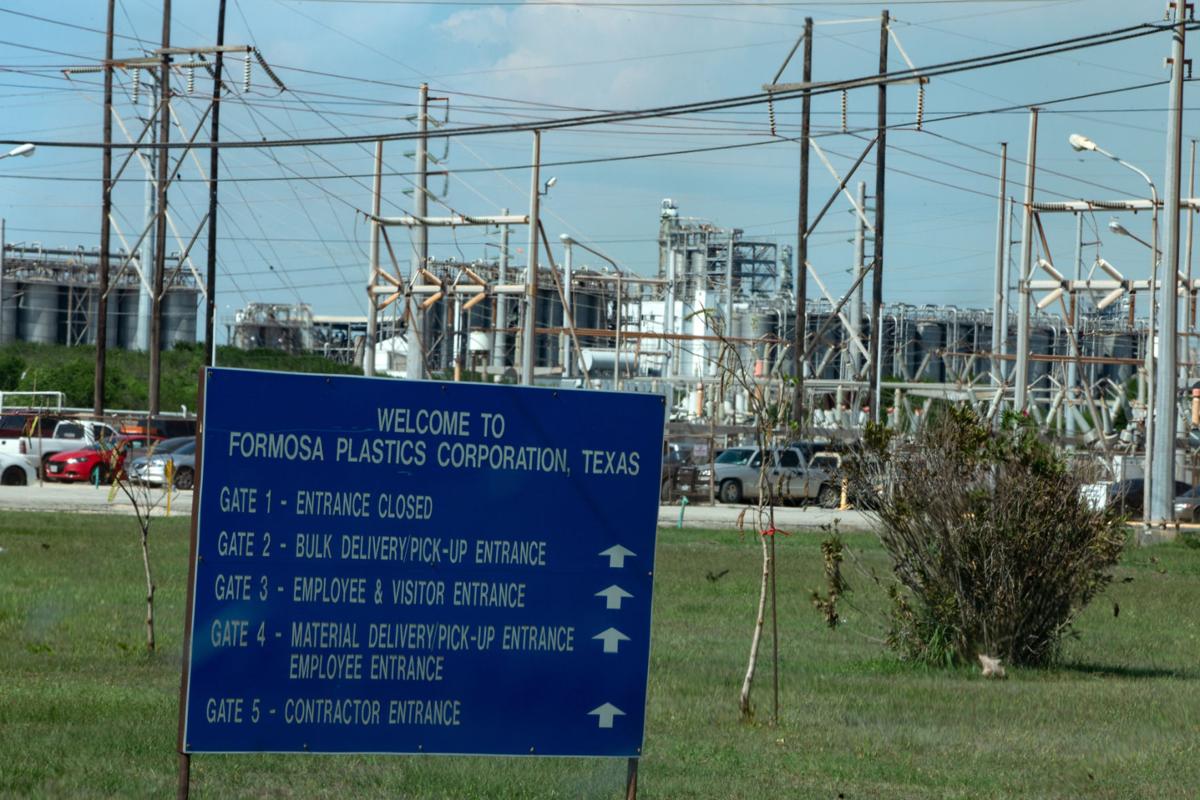 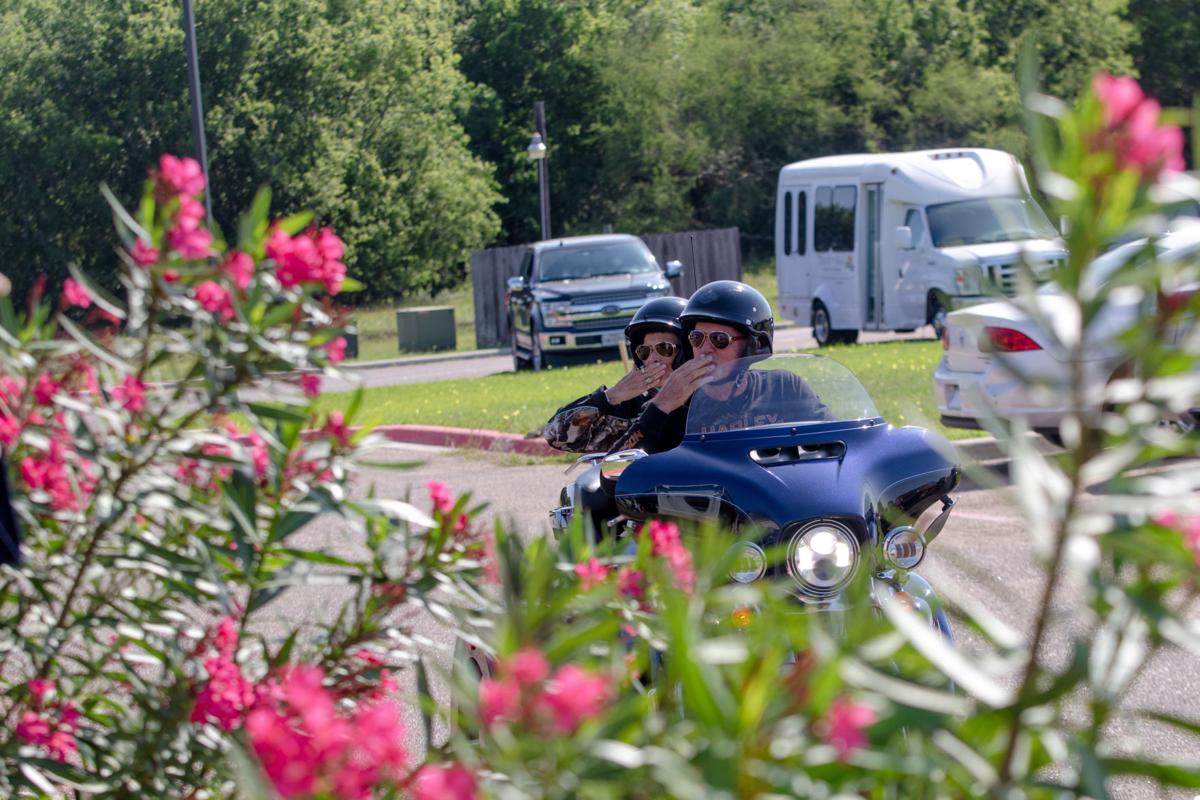 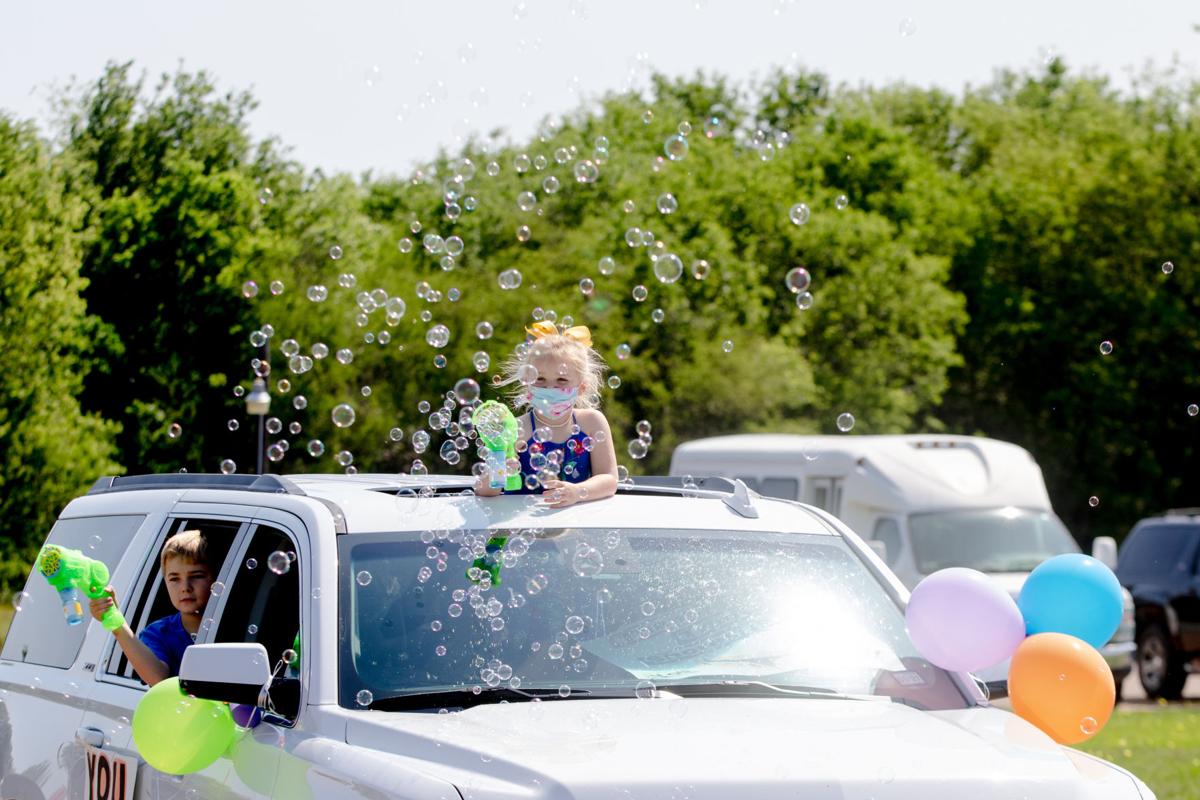 Luke, 8, left, and Paige Price, 5, show their love for their grandmother, Naomi Novosad, with bubbles, balloons and signs at Trinity Shores of Port Lavaca, 201 Trinity Shores Drive. "The residents miss their families," said Brenda McMahan, the center's marketing director who came up with the event. "I just wanted a way to show love to their families."

Luke, 8, left, and Paige Price, 5, show their love for their grandmother, Naomi Novosad, with bubbles, balloons and signs at Trinity Shores of Port Lavaca, 201 Trinity Shores Drive. "The residents miss their families," said Brenda McMahan, the center's marketing director who came up with the event. "I just wanted a way to show love to their families."

As businesses reopened and drive-by celebrations were held in the region on Saturday, a spokesman for Formosa Plastics Corp. confirmed that a total of 15 employees and contract workers at its Point Comfort plant have tested positive for COVID-19.

The nine employees who tested positive are all on the same unit, Steve Marwitz, director of communications at Formosa Plastics Corp., Texas, said Saturday in an email.

The corporation was notified by contractors that six contract workers also tested positive for the virus, he said.

“We require them to manage their own employees with the pandemic plans they have,” he said.

The corporation is working with testing facilities in Victoria and Port Lavaca to test anyone who came in contact with the employees who contracted the coronavirus, he said. After contact tracing is completed, Formosa plans to continue testing site employees.

At least 107 Formosa employees have been tested and 369 have quarantined in accordance with the facility’s pandemic plans since Feb. 2, Marwitz said. Of those 369, 313 or about 85% have returned to work.

Its medical department continues to operate and quarantine personnel with any relevant symptoms, as well as manage each case through protocol before allowing return to work, he said.

Marwitz said the facility has been following guidelines from the Center for Disease Control and Prevention and Gov. Greg Abbott.

“As those guidelines change, we adjust our practices,” he said. “We have made adjustments to our benefits to further encourage our employees to inform our medical team of their symptoms and encourage them to stay home when they are sick.”

Those changes include expansions to compensation for employees who are ordered to quarantine by a medical professional or are experiencing COVID-19 symptoms and quarantined while waiting for results, he said.

Use of sick days for the care of immediate family and school and childcare closure have also been added the Formosa’s Illness and Personal Absence Policy, he said.

Marwitz said Formosa is managing produce to meet requirements and needs of customers as a federally identified critical infrastructure manufacture. The EG2 project is still temporarily suspended, which came to a halt in March.

The threshold for what is considered an outbreak is relatively low, David Gonzalez, the director of the Victoria Public Health Department, said during a news conference on Friday while discussing the outbreak at the Post Acute Medical southeast facility.

“If we have three exposures in one facility that you can tie together, then we determine it is an outbreak, so that actually has a finite number we can look at in any healthcare facility or any other location,” he said.

While the state notifies the county if a resident tests positive for COVID-19, it doesn’t notify the county of where people work or of people who have contracted the coronavirus through exposure at the Point Comfort facility but live elsewhere, he said.

“We haven’t got the full story yet,” he said. “The state won’t give us the number of Formosa employees (who’ve tested positive).”

Meyer, like many, is waiting for Gov. Greg Abbott to announce his next executive orders on Monday before making any more significant changes to local orders. He hopes to have a better understanding of the situation at Formosa by then for risk assesment, he said.

Meanwhile, the air outside the Trinity Shores in Port Lavaca, an assisted-living home, was sweet on Saturday morning.

With bubble gum in her hand and a mask over her mouth, 5-year-old Paige Price stuck half of her body out of the sunroof in the parking lot of the assisted living facility to say hello to her grandmother.

Paige and her mother, Nancy Buffaloe, are among the family and friends of Trinity Shores residents who have not been able to visit their loved ones in-person since March because of the COVID-19 pandemic.

They, along with pastors, fire fighters, police officers and emergency medical personnel, drove by the facility to show both their love and support as part of a You Are My Sunshine event planned by the staff.

Residents and staff gave out hand-painted flowerpots, notes, cookies, hand soap and scrubs to visitors, too, as tokens of their affection.

“We just want them (residents) to see the world that’s out there that they have been held away from because of the pandemic,” said Betty Medlin, executive director. “We’re just excited that they’re gonna get to see a little bit of the world again.”

No additional details about the new cases were provided.

The Victoria Mall parking lot, which has been almost entirely vacant since previous “Stay Home, Stay Safe” orders were put in place, held about 25-30 cars around 4 p.m.

Several business on Navarro Street had large “Now Open” signs hung outside their storefront, and tents were set up at some for curbside service.

Twelve of the county’s 118 residents who have contracted the coronavirus were hospitalized as of Saturday, including two patients who are in intensive care units, said Caitlin Weinheimer, Victoria County’s chief of staff. About 58% of Victoria’s patients have recovered.

Matagorda had 61 cases as of Saturday, including 32 active cases, he said.

The two new cases came a day after the Texas National Guard set up a mobile COVID-19 testing site in Bay City, which was one of several locations in the region that the mobile testing teams deployed by Gov. Greg Abbott visited this week.

A total of 67 people were tested between 9 a.m. and 6 p.m., according to a report the county received from the state, Thames said.

“No one was turned away, if they didn’t have the required code they parked in the back lot and completed the screening then received the code and went through the line,” he said.

There were also no lines or delays, he said.

The county expects drive-up testing results to be available as early as next week, with all results reported by May 1, Thames said. The numbers will be combined and included in daily totals reported by the county.

COVID-19 cases associated with Formosa climbs to more than 20

More than 20 people who work at the Formosa Plastics facility in Point Comfort have tested positive for COVID-19.