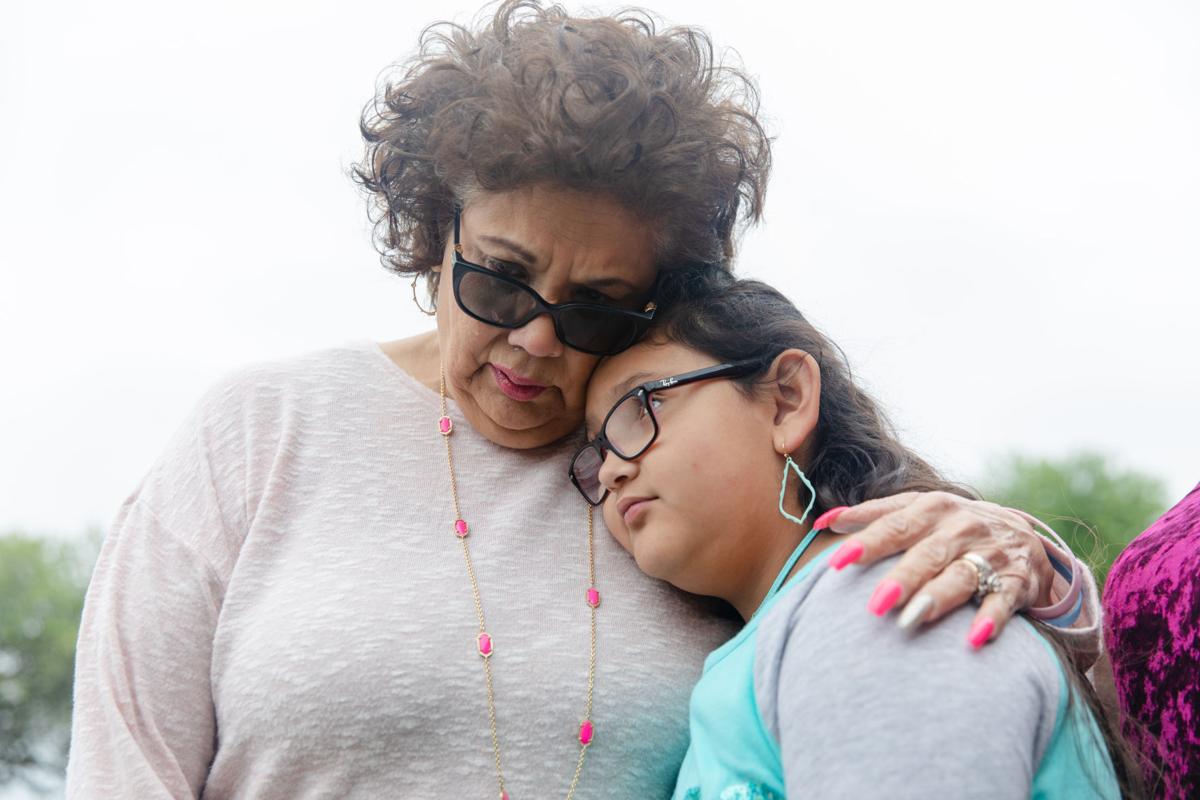 Terri Balboa and Kaitlyn Hernandez, 8, lean on each other after visiting Balboa's mom, Lupe Cantu, 88, over the window on Saturday at the Courtyard Rehabilitation and Healthcare Center. "At the end of the day, all you have is your family," Trina said. 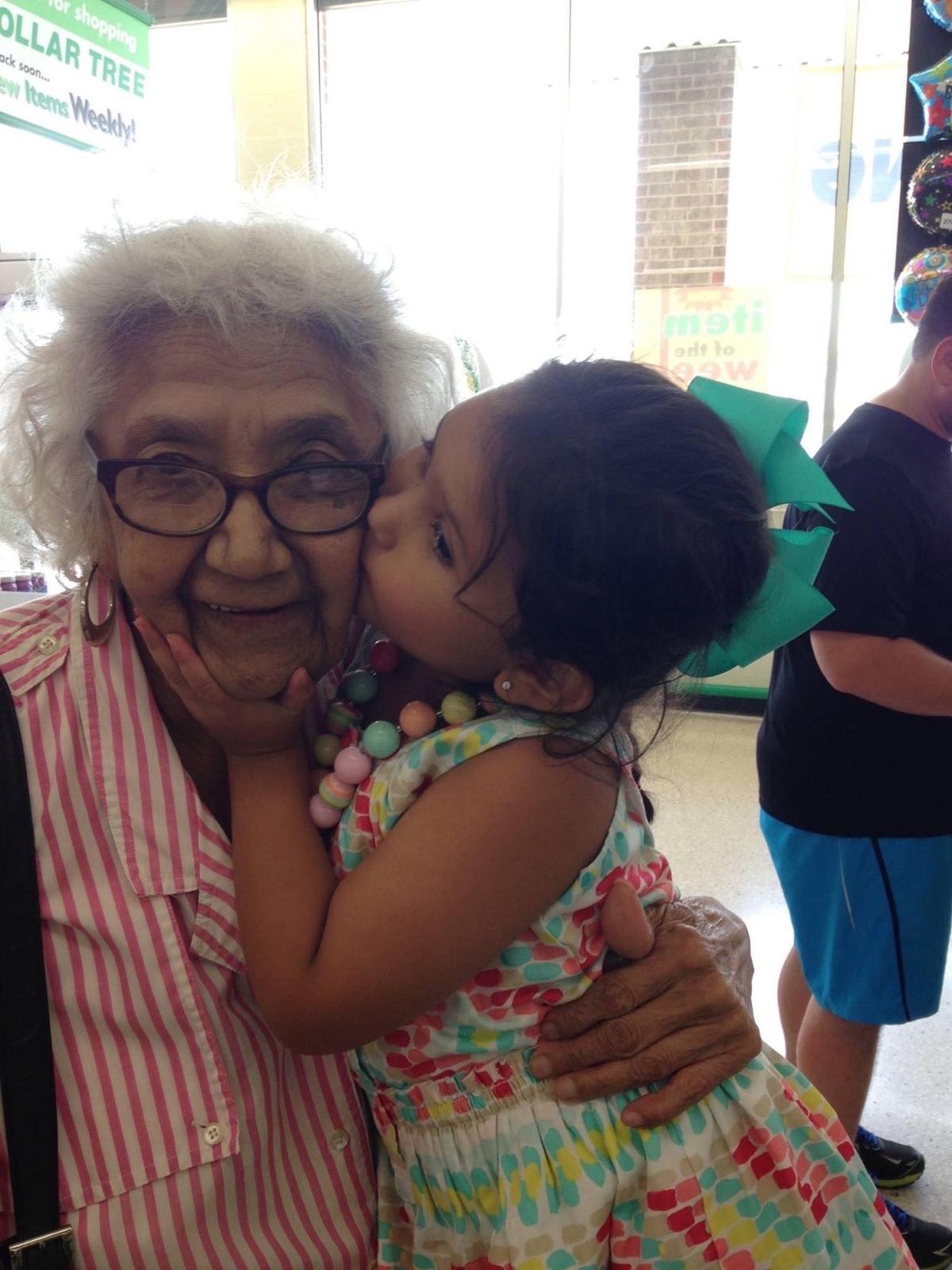 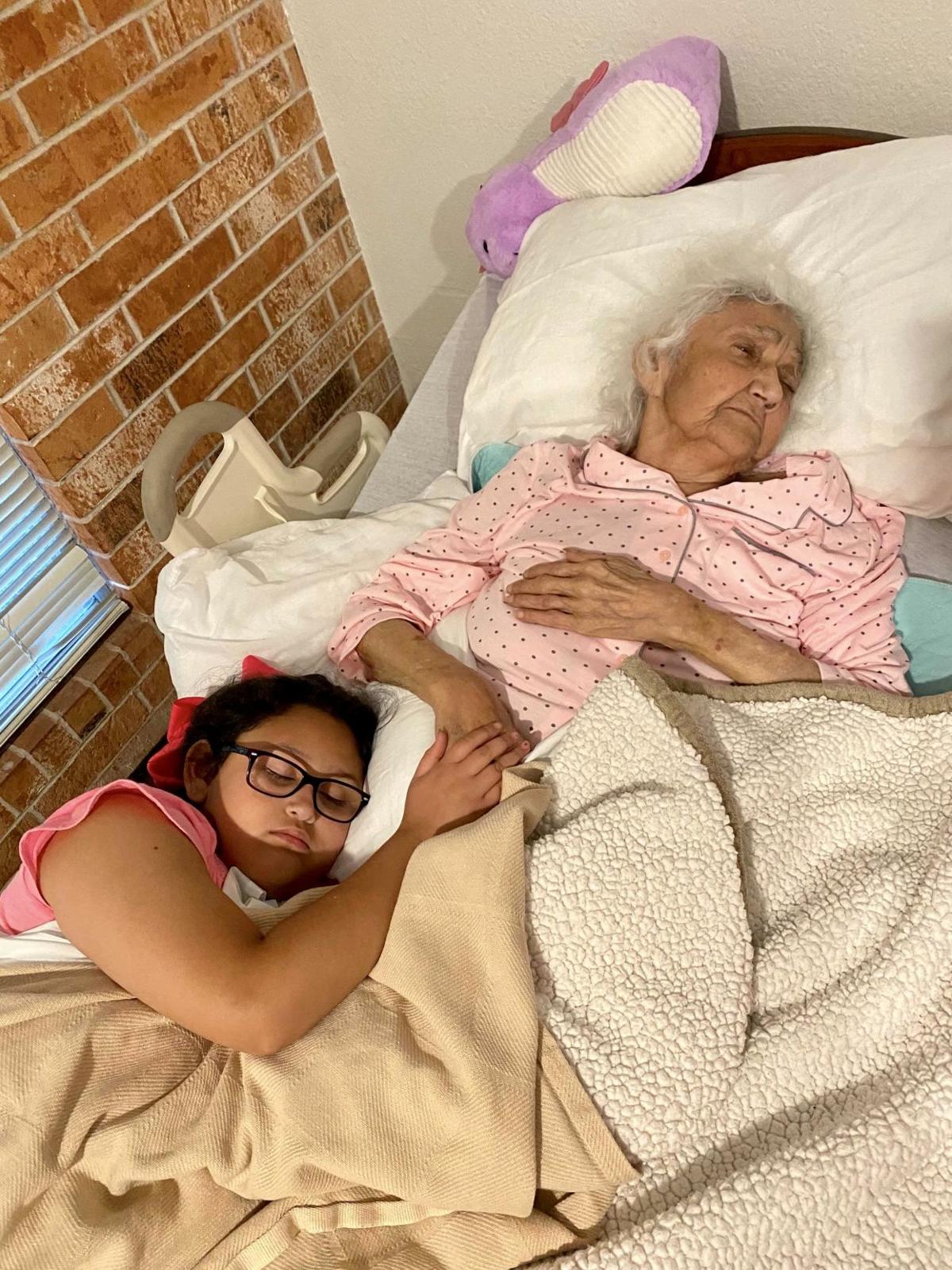 Physical contact has been important for Lupe Cantu, 88, and her family. Before the pandemic, she often napped with her great-granddaughter Kaitlyn Hernandez, 8. 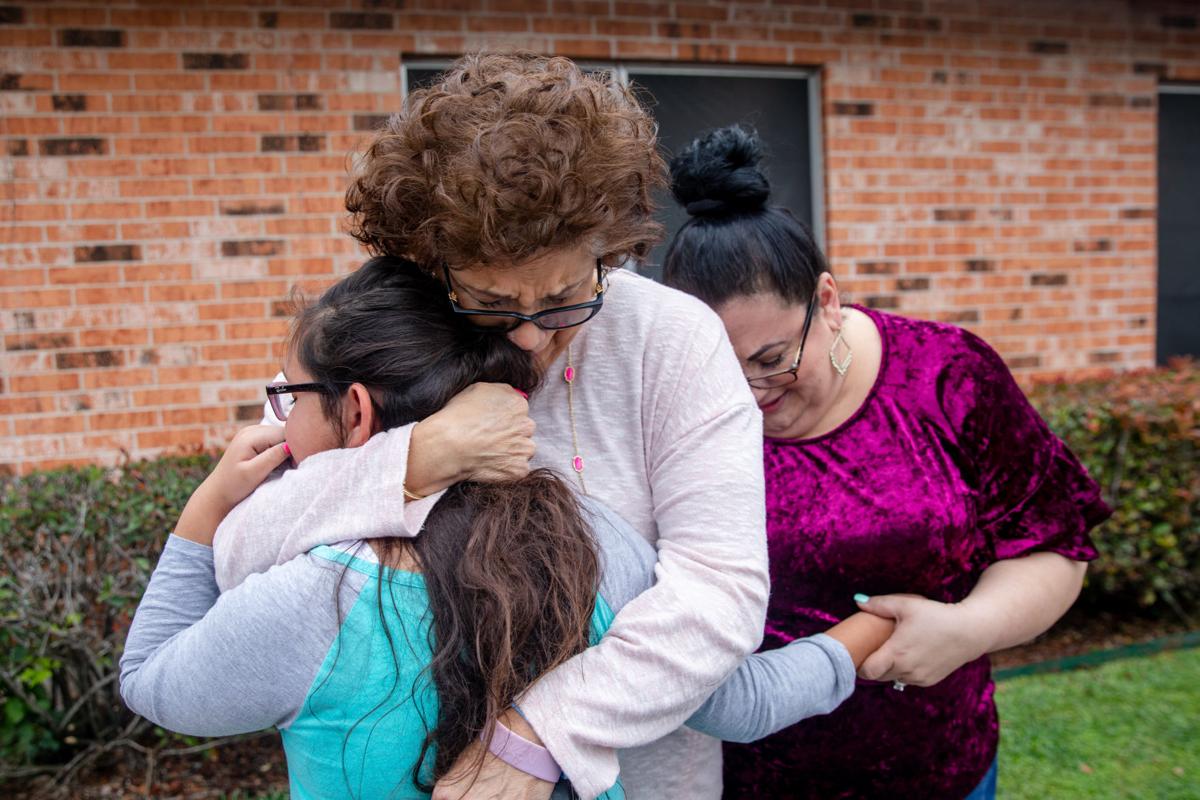 From left, Kaitlyn Hernandez, 8, Terri Balboa and Trina Hernandez cry leaning on each other after the nursing home’s window blind was closed while they were talking to Balboa’s mom, Lupe Cantu, 88, through the window on Saturday. They have been visiting Cantu over the window twice a day since nursing homes were quarantined. “I was devastated,” Balboa said. “I felt like they were stealing my mom’s life because we are all her life.” 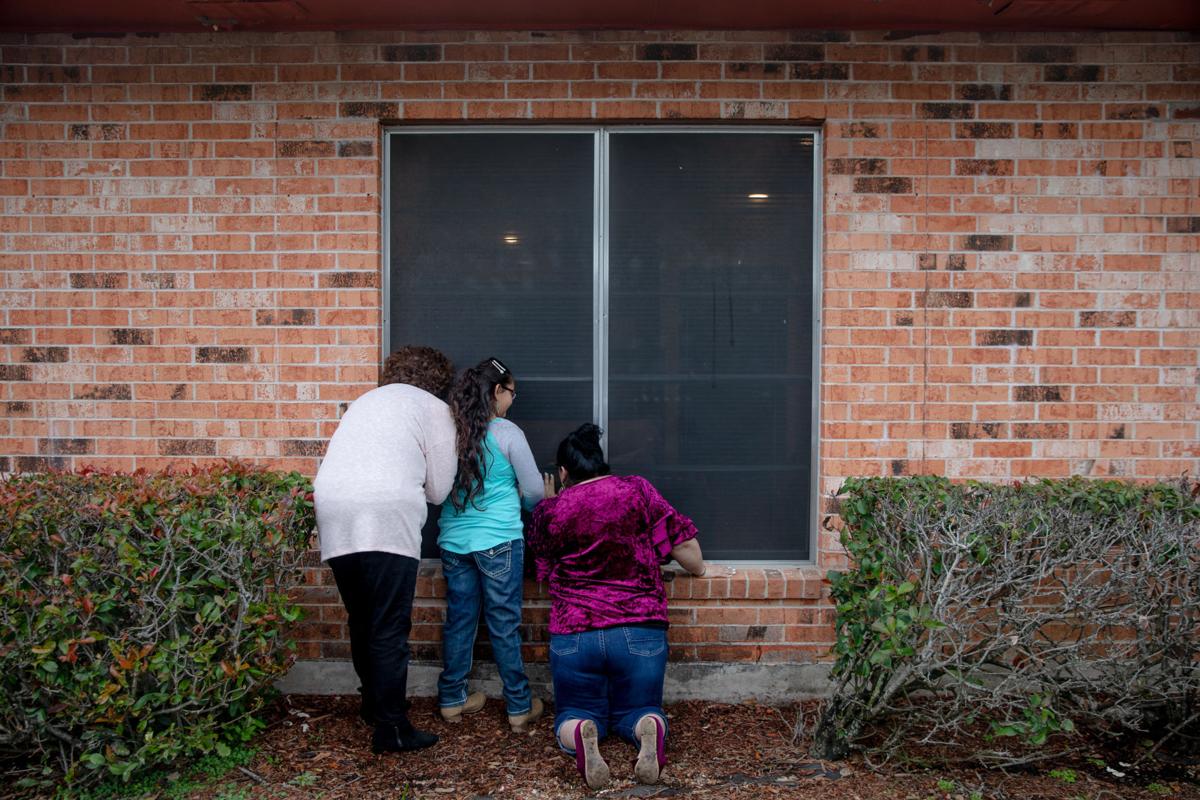 From left, Terri Balboa, Kaitlyn Hernandez, 8, and Trina Hernandez talk to Balboa’s mom, Lupe Cantu, 88, through the window on Saturday at the Courtyard Rehabilitation and Healthcare Center. “Are you having a better day? You look better today,” Trina repeated to Cantu. 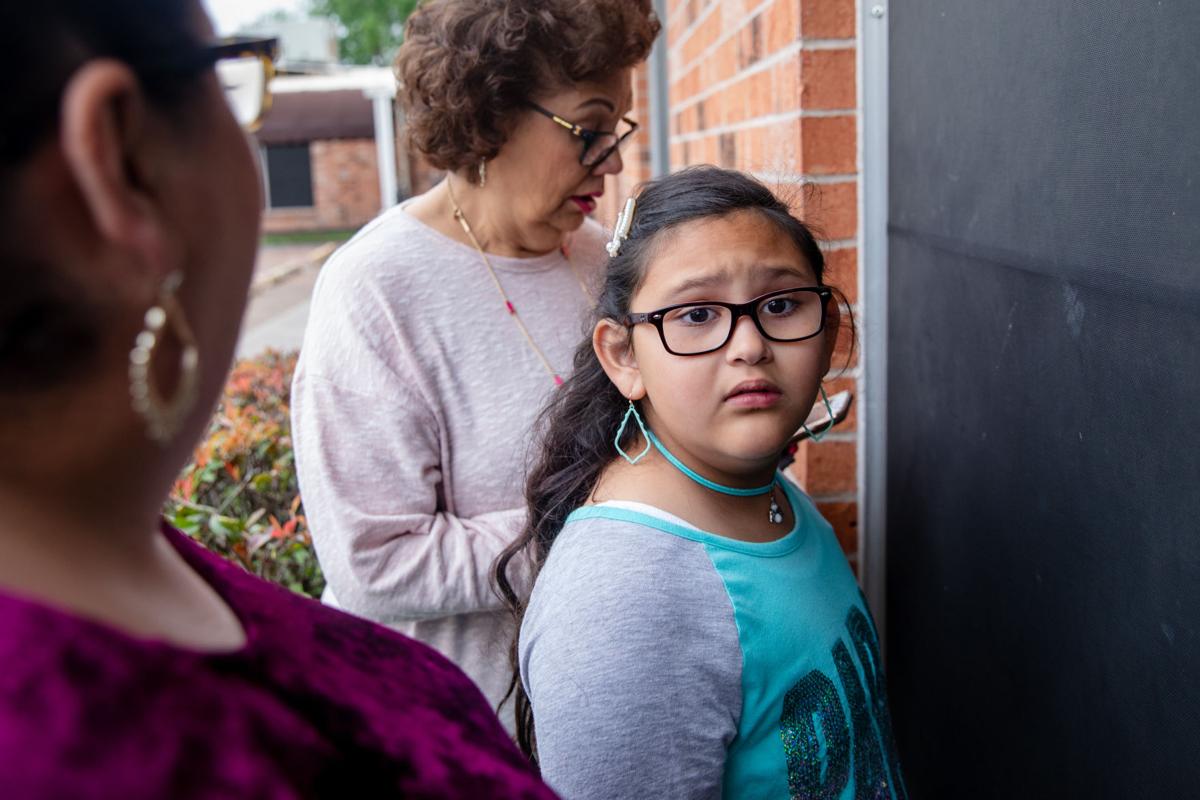 Kaitlyn Hernandez, 8, stands after the window blinds were closed while talking to her great grandmother, Lupe Cantu, 88, over the window on Saturday at the Courtyard Rehabilitation and Healthcare Center. Cantu has created a strong bond with Kaitlyn for a long time, doing anything for her, Trina said. "She [Kaitlyn] literally brings her [Cantu] back to life," Trina said. 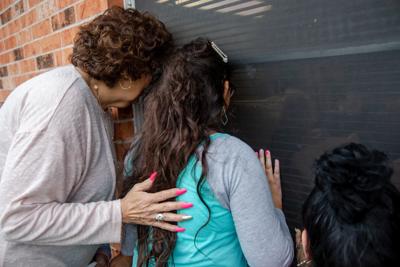 Before the new coronavirus pandemic, Lupe Cantu’s family visited her every day.

And on Saturday, despite a lockdown at her nursing home, three generations of Cantu’s family again visited the 88-year-old matriarch and Victoria native, talking to her through a closed bedroom window.

“We love you, grandma,” said Cantu’s granddaughter, Trina Hernandez, 50, kneeling in the wet soil outside the window. “We love you so much.”

“I wish we could come in, but this is the best we can do,” said a tearful Terri Balboa, Cantu’s 68-year-old daughter.

She described her great-grandmother as her “best friend.”

“They have such a bond. It’s unreal,” Hernandez said of her daughter, Kaitlyn, and Cantu.

Separated by glass, Cantu waved from her bed, smiled and blew a kiss to her family outside.

The four generations of women have always been “very close,” Balboa said.

When Cantu’s nursing home, Courtyard Rehabilitation and Healthcare Center in Victoria, began lockdown procedures more than a week ago on the recommendation of the Centers for Disease Control and Prevention, they found themselves desperate to visit the woman, whom they worry will physically deteriorate without contact with her family.

“She asks every day, can you come in?” Hernandez said.

CDC recommendations advise all nursing homes to stop in-person visitation with residents to prevent the spread of the potentially deadly new coronavirus, which has proven especially dangerous for the elderly.

Balboa said she was devastated by the change in visitation, but the family understands the reason for it.

They said they were deeply disappointed Saturday when a nursing home staff member closed the blinds at the window during their visit.

A company representative said the nursing home allows visits through a shut window, but staff closed the blinds because they were unsure whether Cantu and her family had consented to being photographed by the Advocate. They had.

Before the virus, Kaitlyn, Hernandez and Balboa made daily visits to the aging matriarch to give the woman the physical contact they say she thrives on.

That contact, whether it be holding hands or face-to-face conversations, they said, are important parts of keeping her spirit up.

“We are her life,” Hernandez said, adding, “A day didn’t go by without me being over here.”

Often, Kaitlyn sat on her great-grandmother’s lap, had her nails painted by the older woman, and they snuggled in her bed for naps.

“She told me I bring her joy,” Kaitlyn said.

“She wants to be touched,” Hernandez added.

Despite the new lockdown restrictions, which require them to sometimes shout so Cantu can hear them outside, the woman’s family have continued those visits, often stopping by twice a day.

“There’s days that I will come, and she is asleep,” Hernandez said. “I will just look at her through the window and know that she is OK.”

After all, for decades, Cantu has always there for them with not only an abundance of homemade food but also her compassion, her family said.

Hernandez and Balboa recalled how when they had brought their problems, sometimes even difficult relationship woes, to Cantu.

“She has been our rock,” Balboa said.

“She is full of wisdom, and she doesn’t lie to you,” Hernandez said. “She is blunt.”

For those reasons, Cantu’s family said they had to visit the woman – even if a window separates them.

“At the end of the day, all you have is family,” Hernandez said.

Some Victoria nursing homes and hospitals have gone into lockdown in an attempt to protect patients and residents from the new coronavirus.