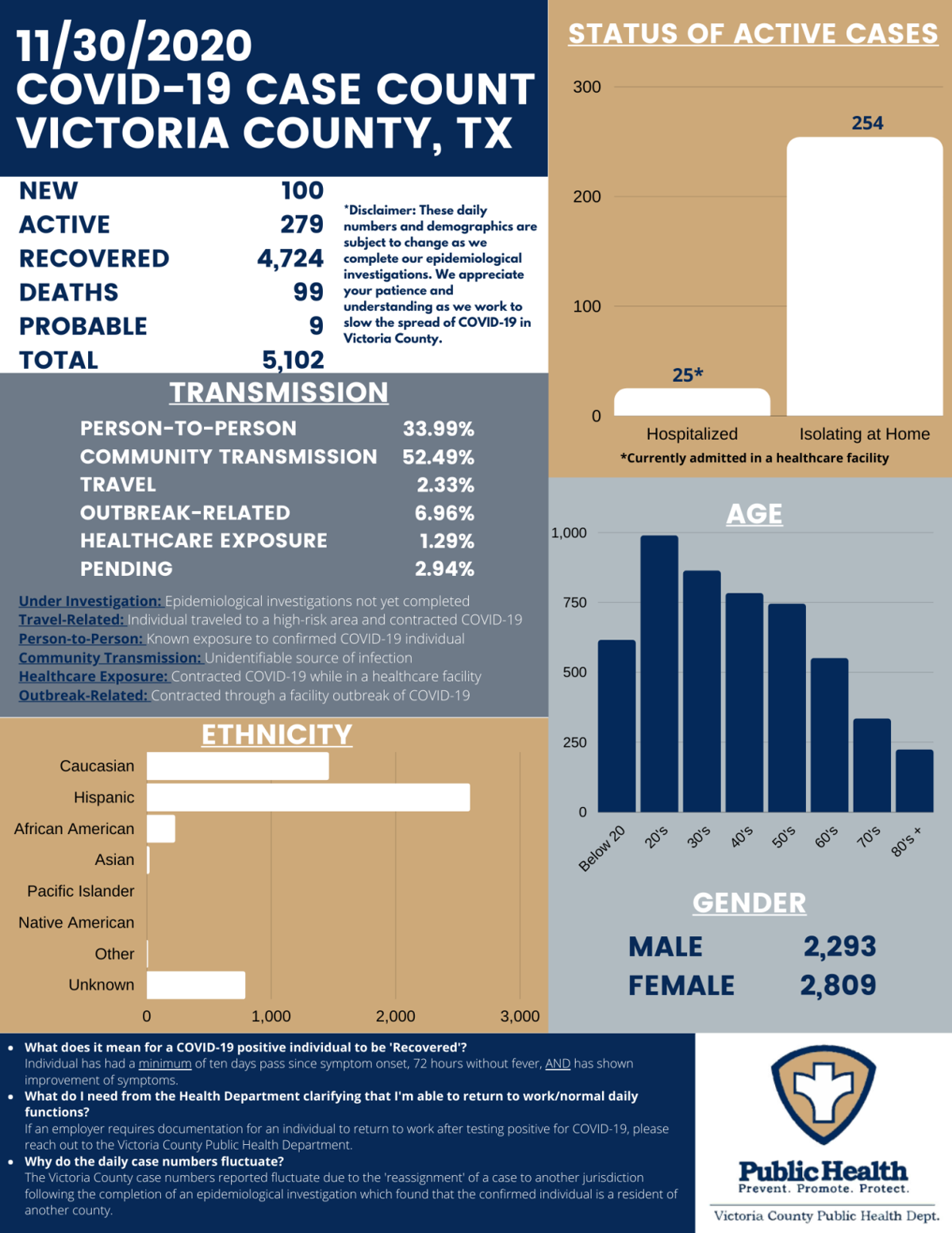 There are 279 active cases of COVID-19 as of Monday, Nov. 30, according to local health officials.

There are 279 active cases of COVID-19 as of Monday, Nov. 30, according to local health officials.

COVID-19 patients continue to occupy more than 15% of all staffed hospital beds in the Crossroads region Monday, according to state data.

There were 77 patients with COVID-19 hospitalized on Monday in Victoria’s trauma service area, which covers Victoria and the five surrounding counties. Those 77 patients occupied 17.04% of the region’s 452 staffed hospital beds. This is the third consecutive day that COVID-19 hospitalizations have passed the state’s 15% threshold. After seven consecutive days with patients above this threshold, some local businesses would be forced to limit their capacity to 50% under state requirements.

The Victoria County Public Health Department had not published COVID-19 numbers for the county as of 9:15 p.m. Monday.

Victoria County officials reported 100 new cases of the disease on Monday, bringing the county's total number of active cases to 279. Of 5,102 total cases, an estimated 4,724 patients have recovered, and 99 county residents have died from complications of the virus.

The county received the report after the close of business Wednesday. The county staff did not release the information until returning to the office Monday because of the long holiday weekend, according to Deputy Emergency Management Coordinator Debbie Cenko.

No additional information about the five people was released.

The county also reported 18 new confirmed cases of COVID-19 and no new recoveries. The county’s total confirmed case count is 1,761, total recovered remains at 1,534 and total deaths related to the disease is 56.

El Campo leads the county with 865 confirmed cases, followed by Wharton with 576, East Bernard with 158 and the remainder in unincorporated areas of Wharton County.

Women lead the county with 987 confirmed cases, followed by men with 738 and people of an unknown sex with 36.

Free testing will be available from 8 a.m. to 4 p.m. Tuesday at the El Campo Civic Center, 2350 N. Mechanic St., El Campo. No prior registration is needed.

Thirteen new cases of COVID-19 were reported among residents since last Wednesday, according to a Monday news release from the county’s emergency management coordinator.

Lavaca County did not release COVID-19 updates between Nov. 25-30.

Of the county’s 1,479 coronavirus cases, 120 were active as of Monday. An estimated 1,346 residents have recovered from the virus and 13 have died, according to the news release.

Four new cases of COVID-19 were confirmed in Calhoun County in the last five days, according to the local office of emergency management.

Local officials reported 43 active cases of the disease on Monday, in the first update since Wednesday, Nov. 25.

Of 1,023 cases, an estimated 972 patients have recovered, and eight county residents are confirmed to have died from the virus.

Matagorda County hit 1,300 cases of COVID-19 after 31 new cases of the respiratory disease were reported in the county, according to state data.

Matagorda County officials urged residents to do their part to slow spread of the disease in a post on Monday.

“As always, we encourage you to protect yourself and your community by wearing a mask in public places, staying at least 6 feet away from other people, washing your hands thoroughly and regularly, and avoiding crowds and confined spaces,” officials said.

There are 14 new, confirmed cases of COVID-19 in Jackson County, according to Public Health Region 8 of the state health department.

These cases leave the county with 89 active cases of the disease as of Monday.

Of 839 total cases, an estimated 742 patients have recovered. There are eight county residents who have died from complications of the virus.

These new cases bring the county’s total to 353 cases, of which 22 are active and an estimated 315 are recovered. There are 16 county residents who have died from complications of the virus.