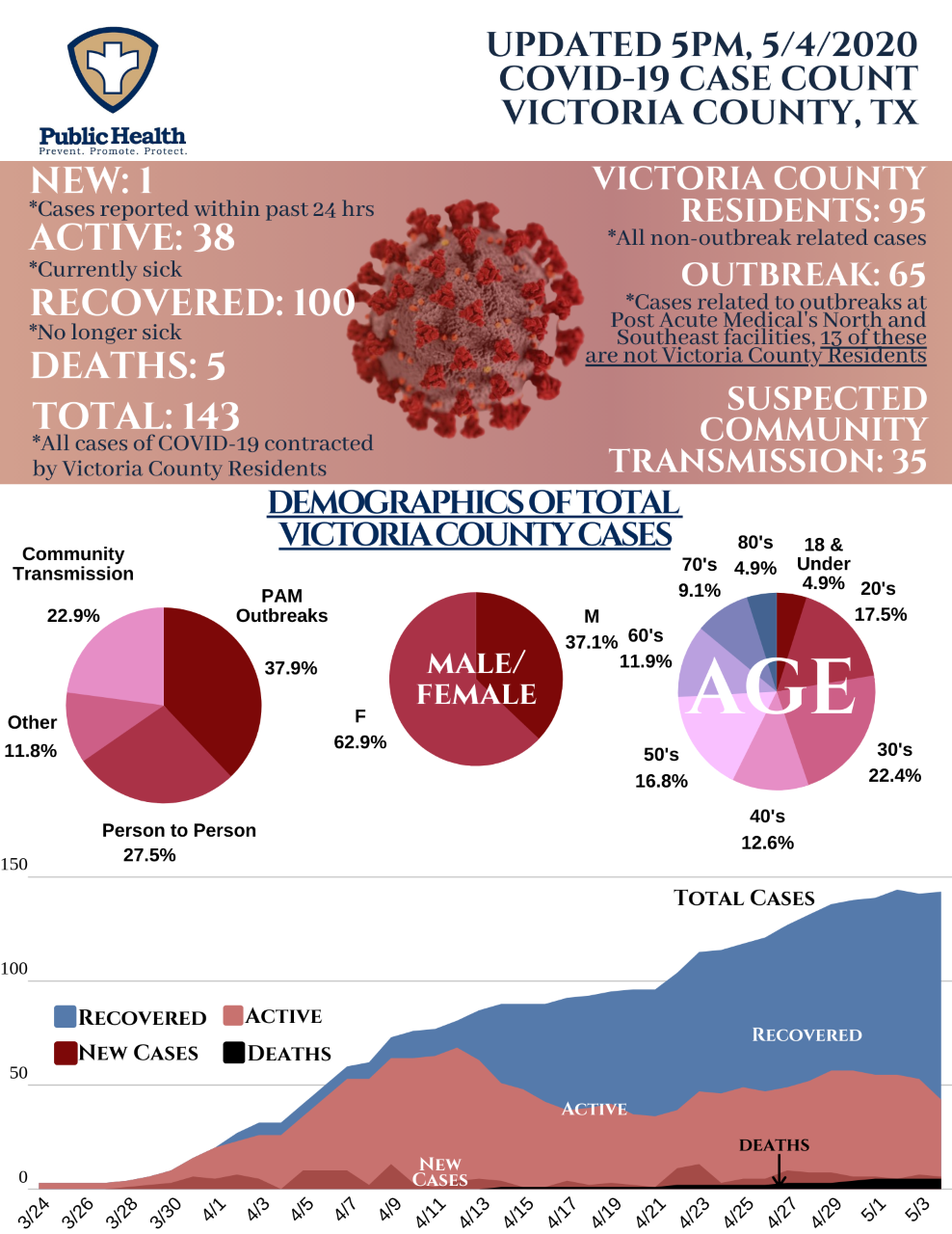 At least 143 Victoria County residents have tested positive for COVID-19 as of Monday, May 4. 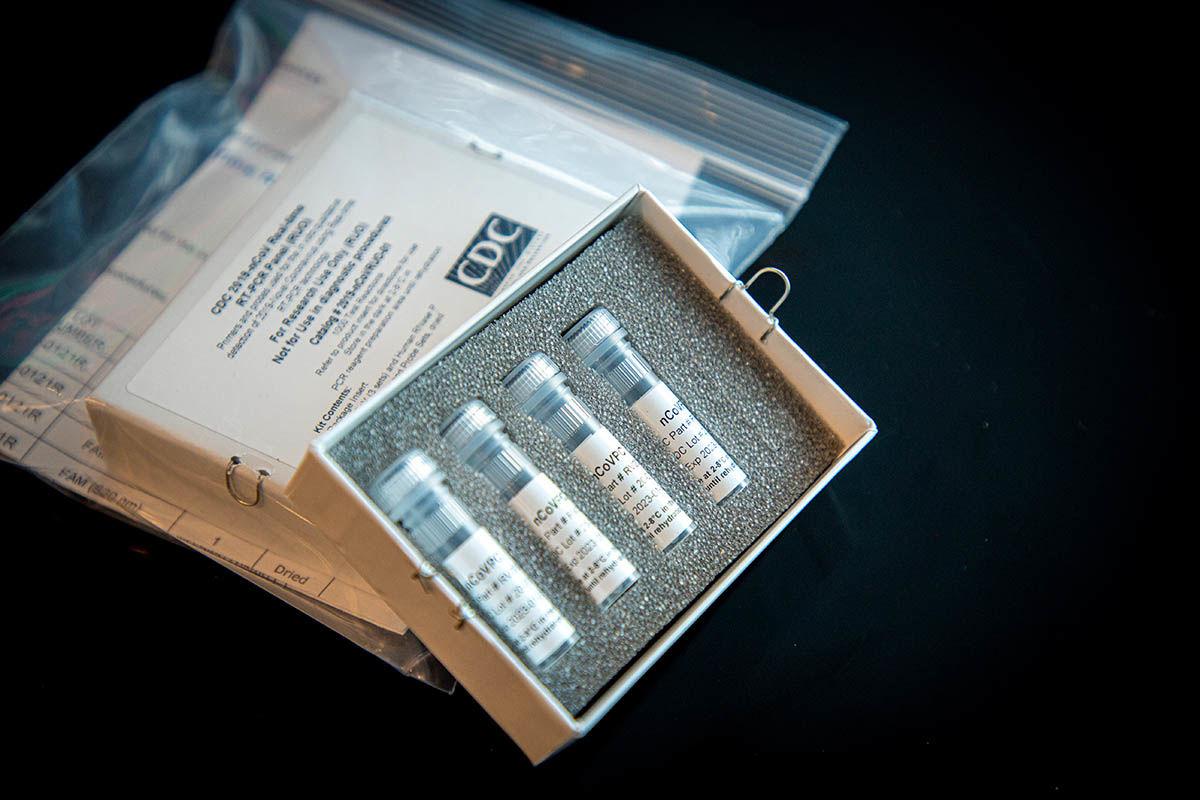 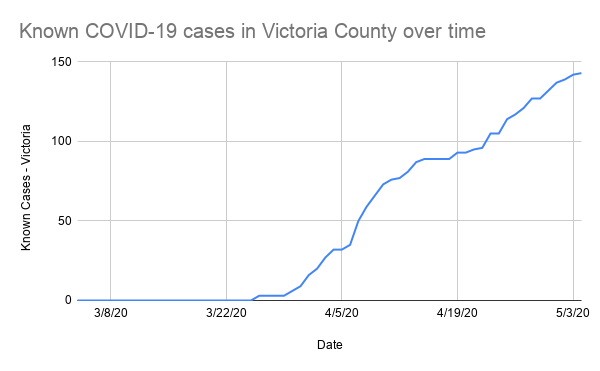 Victoria County officials reported the first three cases of COVID-19 on March 24. As of Monday, May 4, 143 residents had tested positive for the new coronavirus. Data from the Texas Department of State Health Services shows the case trajectory in Victoria County over time.

At least 143 Victoria County residents have tested positive for COVID-19 as of Monday, May 4.

Victoria County officials reported the first three cases of COVID-19 on March 24. As of Monday, May 4, 143 residents had tested positive for the new coronavirus. Data from the Texas Department of State Health Services shows the case trajectory in Victoria County over time.

It’s unclear whether Victoria and surrounding counties will have a traditional “peak” in their respective coronavirus curves.

Since the first COVID-19 cases in Texas were confirmed in early March, the state has braced for a quick climb in cases of the respiratory disease ultimately leading to a peak, after which the rapid spread of the disease would begin to slow, according to early models of the disease.

Although the number of COVID-19 cases statewide has continued a steady climb from March 8 through Monday evening, it’s difficult to know exactly where a specific community is in the virus’s progression. That is due in part to how quickly knowledge about the disease and how it spreads is developing, local health officials said.

“There is no good way to say where we are exactly on the curve, but as of today, it does appear that the efforts made in Victoria County have assisted in flattening the curve,” county epidemiologist Brittany Burgess said in an email. “We expect that we will continue to see cases in the coming future, but depending on how well social distancing and personal protective measures (such as face coverings) is practiced, we hopefully will not see a spike in our cases.”

Erin Clevenger, the chief nursing officer at Memorial Medical Center in Port Lavaca, said the number she watches most closely is the number of active cases in the county, because it’s that number that local physicians and nurses have to make sure they have the capacity to treat and care for.

“I don’t know if we will have a traditional peak,” Clevenger said. “We watch the active cases, and that’s kind of what I would like to see stay flattened.”

“For me when we talk about the curve, I’m looking at active cases,” she added.

The concept of “flattening the curve” has become an important one for public health experts during the pandemic. One visual in particular, created by Drew Harris, a population health researcher and assistant professor at the Thomas Jefferson University of Public Health, illustrates that if you can’t completely contain the spread of a new disease, populations must at least try to slow it down. Slowing the spread through steps like social distancing will reduce the number of cases that are active at any given time, meaning a national or local health care system won’t be inundated all at once.

“It’s hard to know exactly where we are (on the curve),” said Dr. John McNeill, Victoria’s local health authority. He said Monday’s case count is reflective of the community’s actions from two weeks ago. He added that the models forecasting the spread of the disease change often as new information about its spread is confirmed.

“There are a lot of models now that are pointing to a lot more illness and a lot more deaths (in the U.S.)” McNeill said. “Most places have not seen a traditional peak, more places are seeing more of a prolonged peak.”

In Calhoun County, one additional resident has tested positive for COVID-19. There are now 34 county residents who have tested positive. Of those, 18 people have recovered and three residents have died.

A state-run testing site will be in Port Lavaca on Tuesday. The collection site, which is by appointment only, will be at the Bauer Community Center, 2300 SH 35.

All 41 DeWitt County residents tested April 25 at the drive-thru site were negative for the new coronavirus, officials said in a news release Monday.

The testing site, run by the Texas Medical Services Mobile Unit, tested 41 county residents and 12 non-residents outside the Cuero Municipal Library. Of the 12 non-residents, one person tested positive for COVID-19, according to the release.

“I am pleased to receive this good report from DSHS,” DeWitt County Judge Daryl Fowler said in a statement. “It appears that the drastic measures employed by the governor through his executive orders and the public’s serious approach to ‘flattening the curve’ are paying off.”

Two new cases of COVID-19 were announced Monday by the Wharton County Office of Emergency Management.

So far, 41 Wharton County residents have tested positive for the disease, of which 25 have recovered from the disease.

The new patients are a child and mother of a known active case. They are under quarantine in the East Bernard area.

“Everyone doing their part to slow the spread has yielded low numbers for Wharton County. Keep up the good work,” the office said in a news release.

It also noted an additional test site in Wharton County will open later this week. Details will be announced on www.facebook.com/Wharton-County-Office-of-Emergency-Management-221712291190574/?__tn__=kC-R&amp;eid=ARAcRYTmH2oI6Vb_s0ep-XQj2N73XS9iNfTaqybSZNuq_aBWJI6LOIiEqJOi3ltrqDmcly_zNZ-cLg6j&amp;hc_ref=ARS55CQ-ljskJz1FwcXWnxLEPTH-SpWXsWthhBNyRa4GtrTlrNbKBgbBxcSPvOjBSXc&amp;fref=nf” target=”_blank”}the Office of Emergency Management’s Facebook page.

We can agree we want three things from this COVID-19 pandemic – our health, to be able to safely leave our homes and to have a strong, healthy…