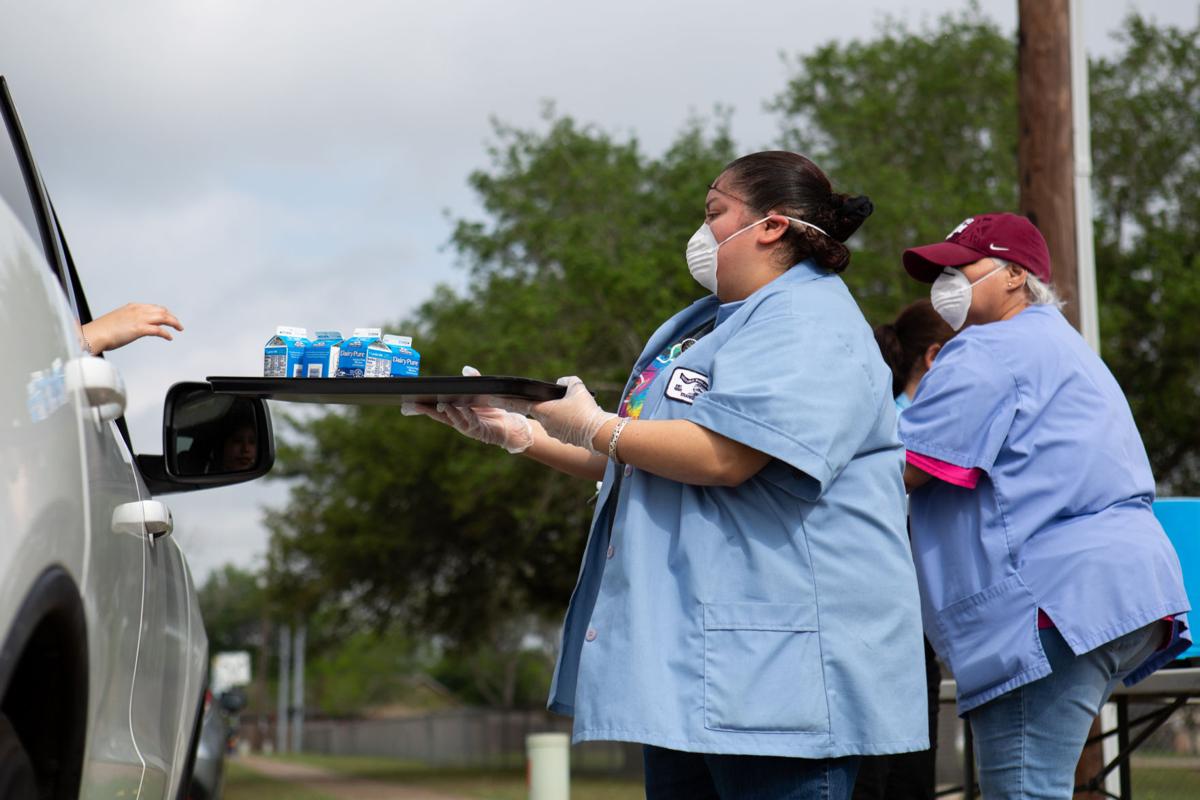 Davina Garcia hands cartons of milk on a tray to students as they drive up to pick up meals outside of Rowland Elementary School. 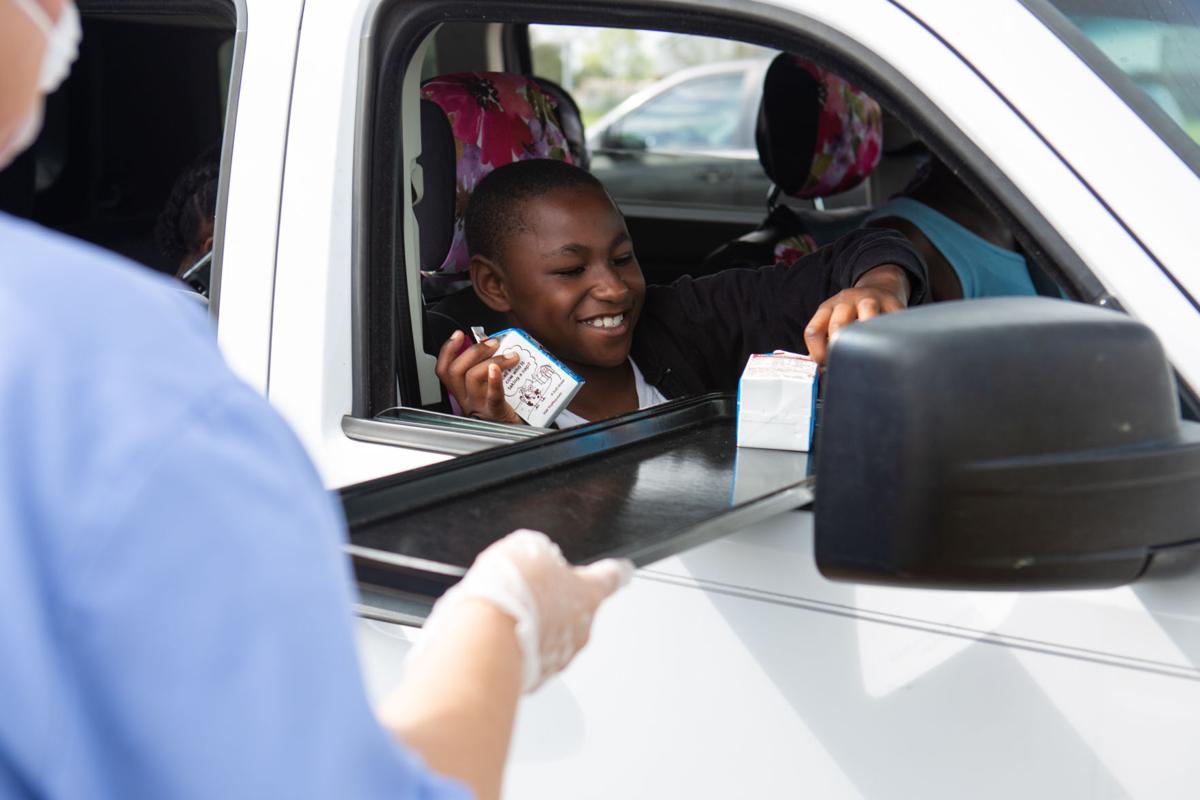 Brayson Williams, 11, smiles as he grabs cartons of milk off a tray outside of Rowland Elementary School, one of six locations where Victoria school district started distributing breakfast and lunch to students Monday. 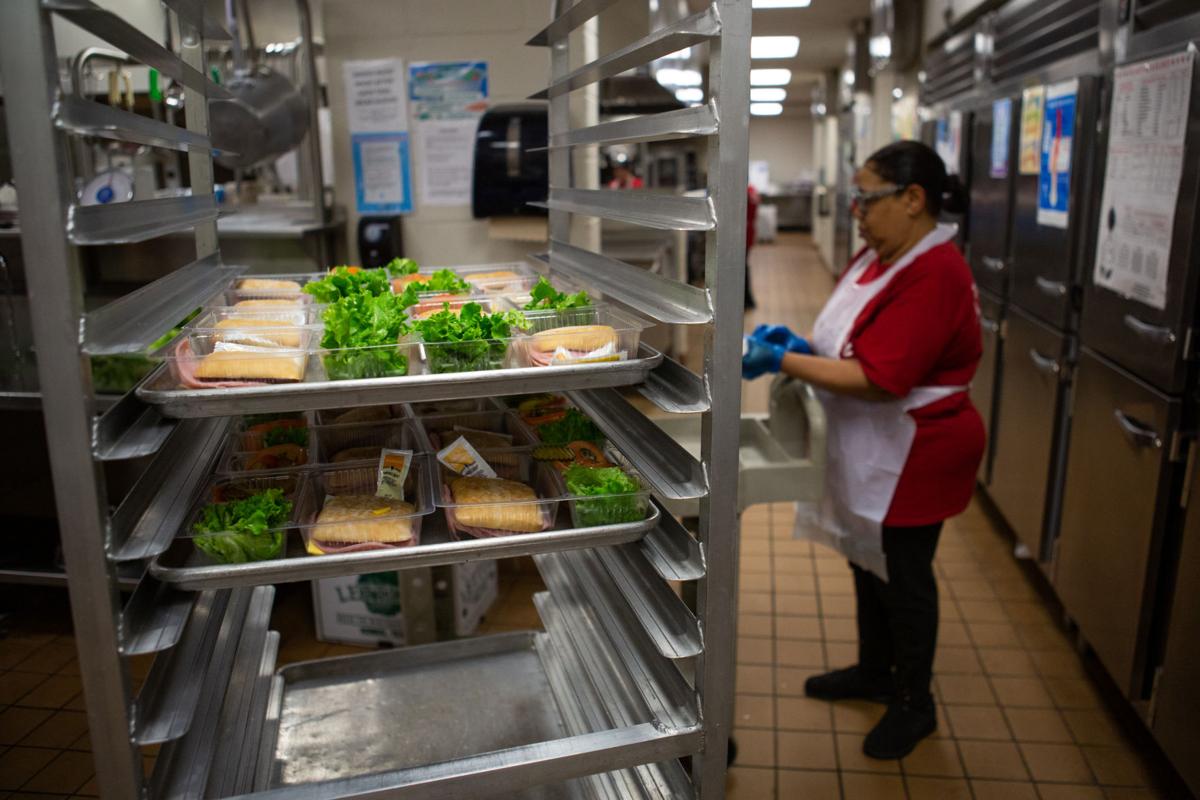 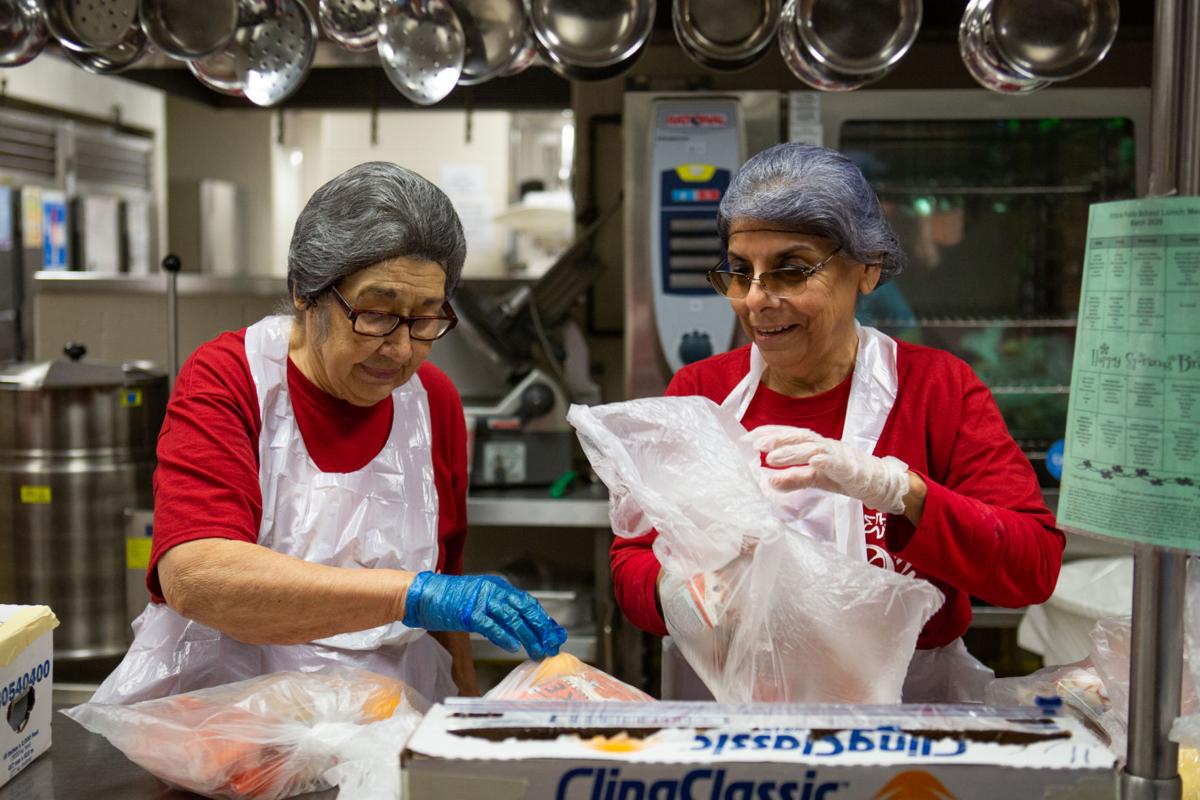 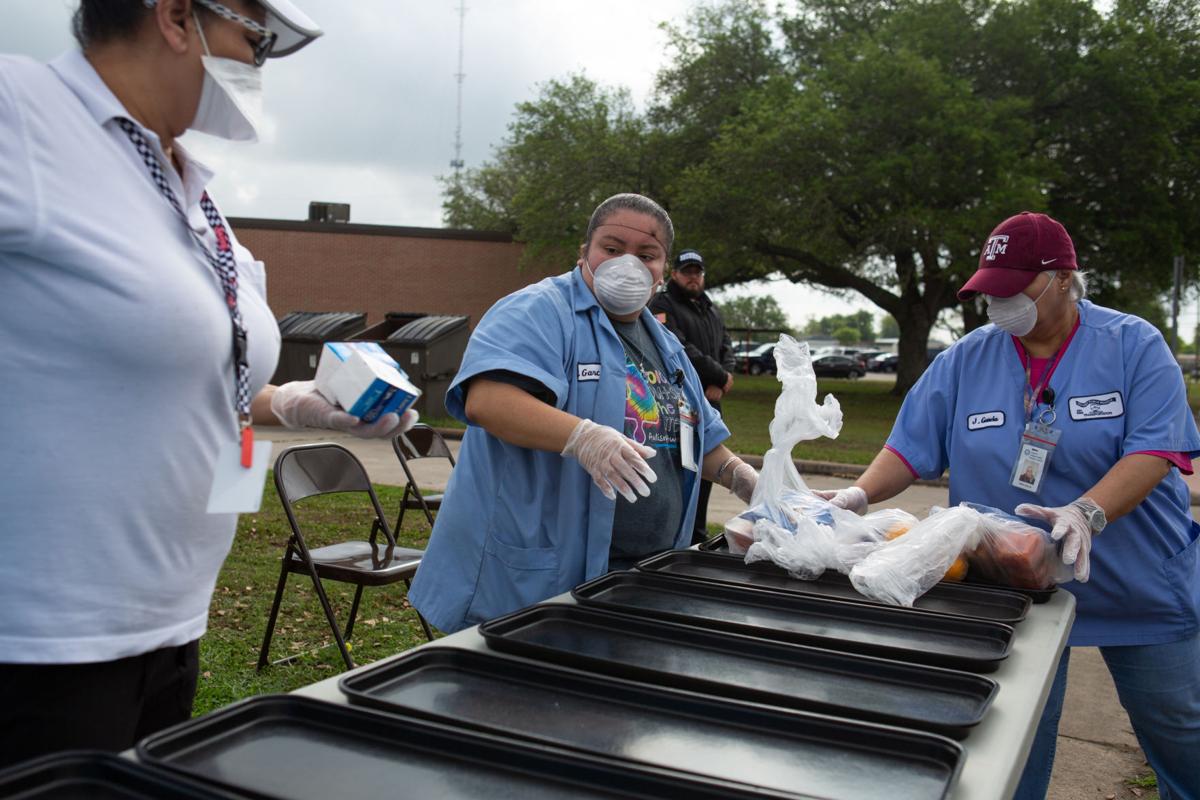 Guadalupe Garcia, left, Davina Garcia, middle, and Julia Garcia put meals on a tray to hand out to students as they drive up during Victoria school district's first day of distributing meals. 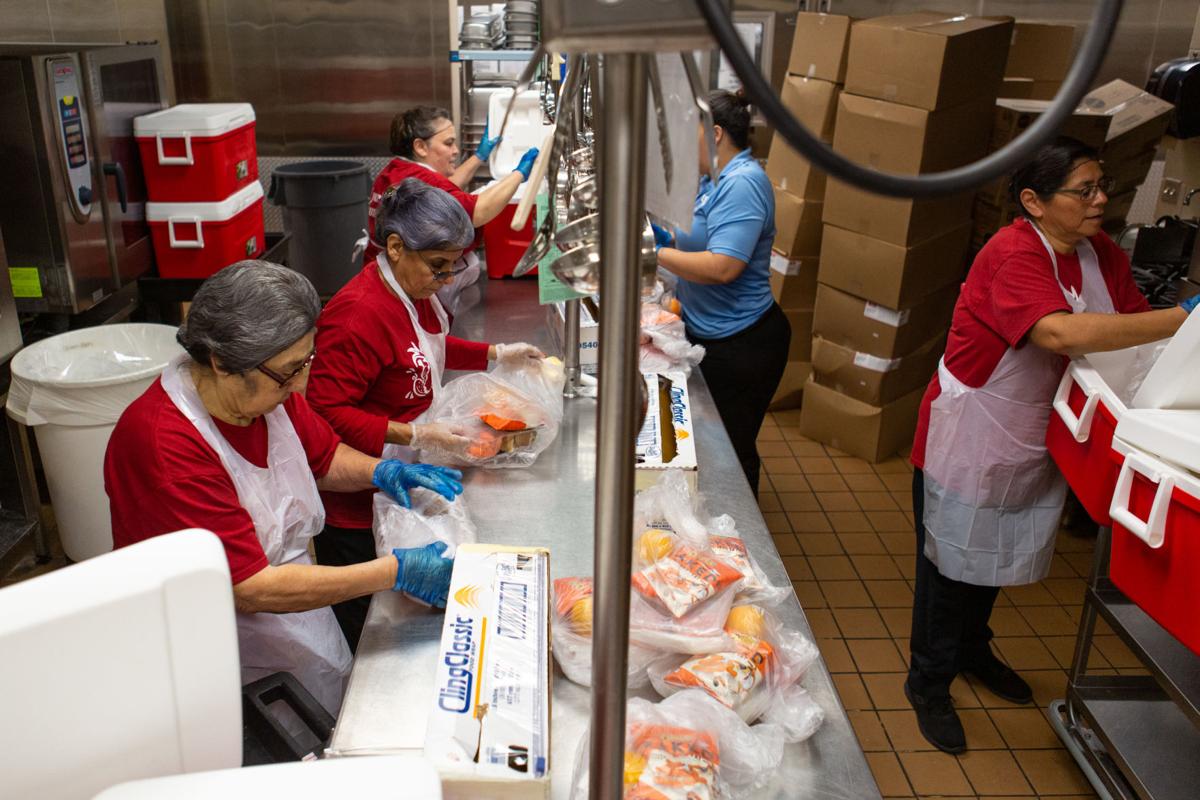 Davina Garcia hands cartons of milk on a tray to students as they drive up to pick up meals outside of Rowland Elementary School.

Brayson Williams, 11, smiles as he grabs cartons of milk off a tray outside of Rowland Elementary School, one of six locations where Victoria school district started distributing breakfast and lunch to students Monday.

Guadalupe Garcia, left, Davina Garcia, middle, and Julia Garcia put meals on a tray to hand out to students as they drive up during Victoria school district's first day of distributing meals.

Brayson Williams, 11, stretched his arms out the car window and grabbed his lunch for the day.

The fifth-grader walked the Rowland Elementary School halls 10 days ago thinking he would be back to his normal routine Monday morning. Now, as COVID-19 spreads through the country, he must look at it from the street and receive his lunch through an open car window.

The familiar Rowland nutrition team handed Brayson his food on a tray with gloved hands and masked faces. Their hands never touched in the exchange of food.

The staff’s eyes squinted, hinting at a smile behind their masks.

“It was OK,” said Brayson about receiving his food. “I’d rather go to school.”

Rowland Elementary School was one of six food distribution sites set up by the Victoria school district. Administrators opened food to all children who are 0-18 years old. Shields, Crain, Aloe and Hopkins elementary schools and Stroman Middle School served as distribution centers for any child.

The meals are distributed in a drive-thru style to avoid close contact between people.

Superintendent Quintin Shepherd said during a Friday press briefing that parents without transportation should call the parent liaison at their home campus, and they will coordinate food pick up for those families as needed.

Students must be present for meal pick up because the U.S. Department of Agriculture requires the district to serve students. The district can only serve one meal at a time under the same regulations.

Public schools across the Crossroads started their food distribution, as well.

Mary Salazar, Rowland elementary child nutrition manager, waved at students as they picked up their free meals Monday morning and into the afternoon.

She greeted the families alongside the rest of the nutrition team and documented their progress on a clipboard.

“Make sure you guys come back for lunch,” she urged families as they drove away.

As cars rolled to their table stationed on Dean Cook Drive, she would ask how many packaged meals were needed.

“That was a car full,” she said after serving six meals in a five-person vehicle.

Beside the school district staff, cartoon character Goofy waved at the passing cars. Magical Entertainment donated a character for each of the distribution sites, Salazar said.

Before lunches were distributed to families, they were prepped at Victoria East and West high schools. The meals prepared at East were sent to Rowland, Shields and Crane and West supplemented the meals at Hopkins, Stroman and Aloe.

The plans for the March meals still hung on the wall, but they were forgotten as the crew made lunches for their first day of meal distribution since schools closed as the novel coronavirus sent people into their homes.

“We don’t mind doing it,” Padierna said about the early morning work. “We enjoy providing meals for our students because for many these are the only meals they get.”

Padierna wrapped lunches in cling wrap, stuffed them inside plastic bags and placed them 12 at a time into a red plastic cooler. Idle hands didn’t exist in the East High School kitchen and everyone moved with a purpose.

Outside the kitchen, the cafeteria, which usually bustles with activity sat empty and quiet.

It’s weird not seeing the students here, Padierna said. They are usually the best part of her day.

Williams said she is grateful for the meals that her family needed.

“It helps a whole lot,” she said. “Especially the way things are going right now with everyone panicking and buying a ton. I can’t do my normal shopping.”

The Williams family picked up their lunch Monday morning, but Williams said starting Tuesday morning they will pick up district breakfasts, as well.

Typically students receive breakfast and lunch from the school, but with school being closed she worried about feeding them all three meals in a day. She added that her children tend to eat when they are bored.

“This helps me out so much,” she said. “Being on a fixed income is hard.”

It goes beyond food though, Williams said.

“They look forward to getting out (of the house) and eating breakfast and lunch, especially my little one,” she said. “I was very impressed. Everything was smooth. The kids really enjoyed their meals.”

The Victoria school district will not continue face-to-face education on Monday.

Just to be clear, this was free to those receiving the meals, but is taxpayer funded. Nothing is free, the bill always lands somewhere.

What is this nonsense?? Meals are already available for free to students who qualify, and VISD has schools where every student qualifies. It, meaning the money, comes from the federal government, and all the studies that show that kids can't learn when they're literally starving.

Imagine seeing children getting food and then turning around and saying "BUT MUH TAXES".

Not sure why it’s the schools job to feed kids outside of school. It’s sad when the only time your kids can eat is when at school. As far as taxes, we pay federal taxes. On the other hand, I’m glad kids who need it get to eat.

It's school's job to feed kids when they're at school, period. If you're going to legally mandate someone to be somewhere and not allow them to leave, you have to provide meals for them. Since they're not in the physical school building but are still expected to be going to school via distance learning, the school needs to provide for them.

I don't understand why this is such an issue for some people. It's literally been proven(https://academic.oup.com/qje/advance-article/doi/10.1093/qje/qjaa006/5781614) that government investment in children is a profit-generating endeavor for the government.