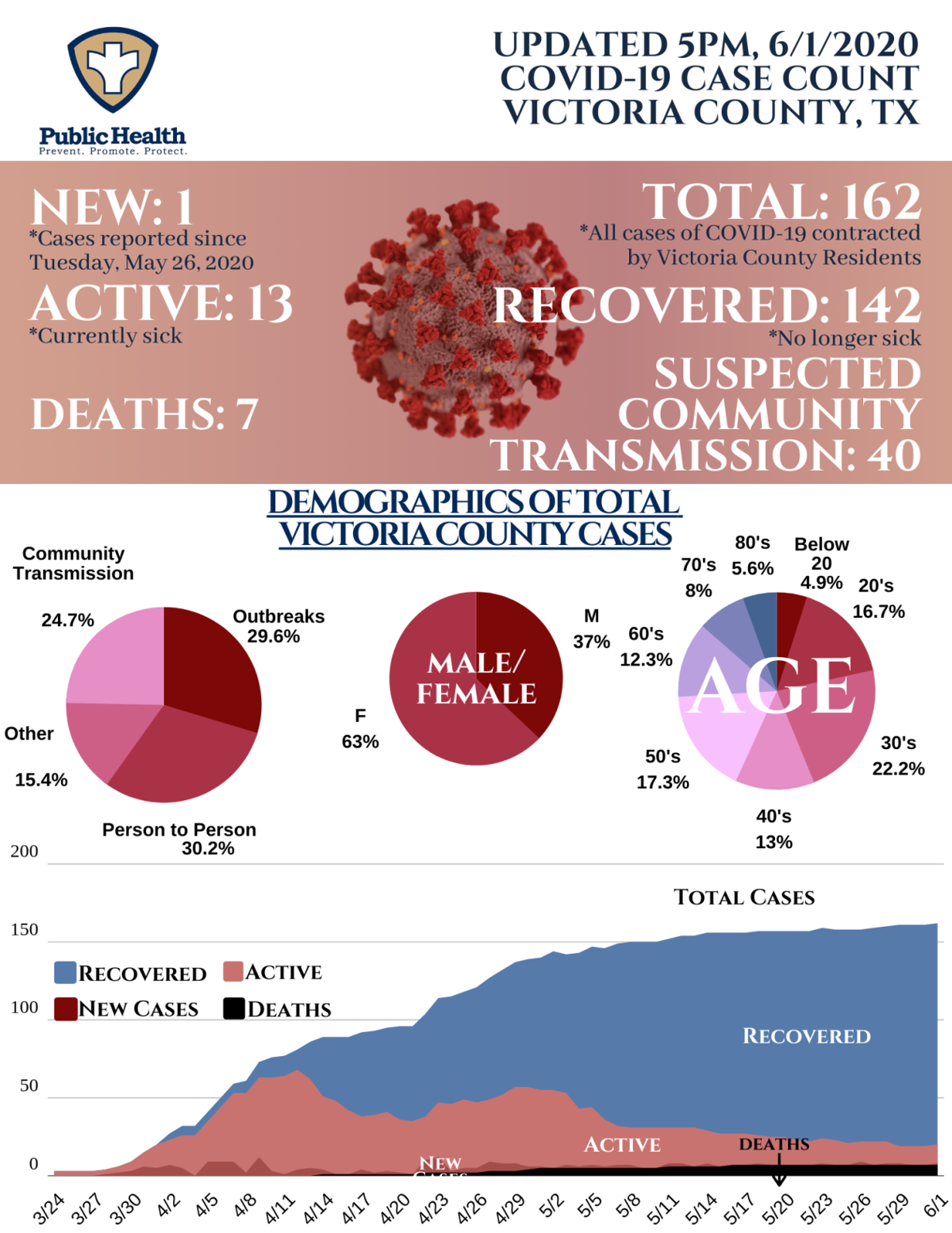 One additional Victoria County resident tested positive for COVID-19 as of 6 p.m. Monday. There are 13 patients currently sick with the disease, officials said. 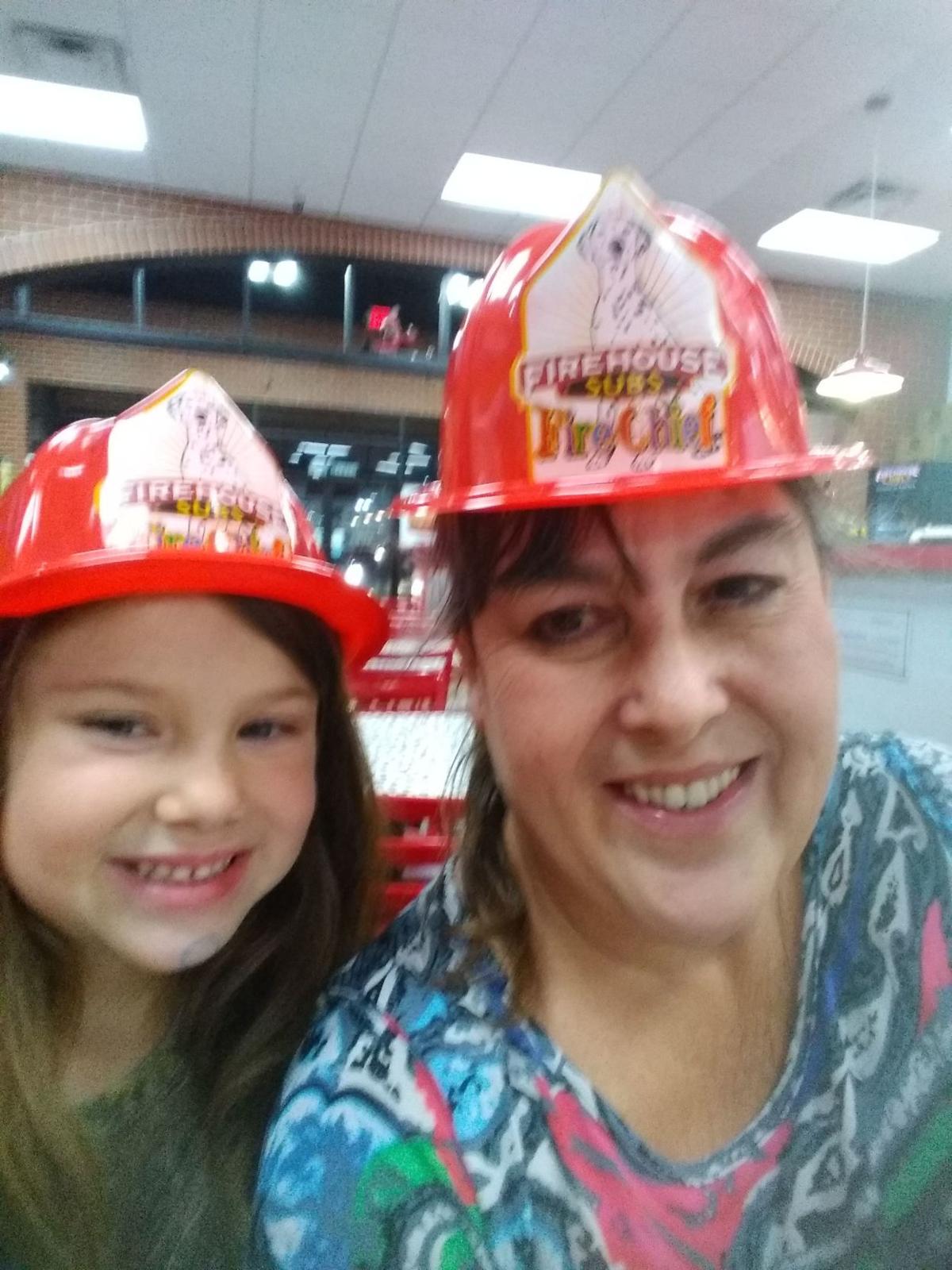 One additional Victoria County resident tested positive for COVID-19 as of 6 p.m. Monday. There are 13 patients currently sick with the disease, officials said.

When Marietta Gohlke first felt pressure in her head, she assumed it was a sinus infection, which she’d suffered before.

But eventually, the pain moved from below her eye to her left temple. Later, Gohlke started to feel a tingling in her right hand as she brushed her hair, she said. The tingling went up into her finger, and then started coming back down her arm. It left her feeling unsteady, so she asked her partner Mark Hamilton to take her to the emergency room at Cuero Regional Hospital when he got off of work.

Instead, Hamilton decided to take her right away.

When Gohlke got the ER, the physician who was evaluated her asked her some simple questions.

What year was it? What was her name?

She could remember her name, but struggled to say the right year.

The physician asked her the same questions a few more times.

Gohlke’s physician in Cuero consulted with a specialist in San Antonio via telemedicine, and Gohlke was airlifted to Methodist Hospital, part of the South Texas Medical Center. She spent a week being treated and recovering there.

Now, almost a year since she suffered the stroke, Gohlke, 54, has mostly recovered. She has lost some of her vision in her right eye. She is still partially blind in her right eye, where there is a “bright, white patch” in her line of vision. Gohlke, a former reporter and photographer for the Cuero Record, said she’ll know she’s made a full recovery when she returns to two of her favorite pastimes, sewing and photography.

Gohlke said she wanted to share her story so people realize the importance of getting care quickly when you’re suffering a stroke, a message that’s of particular urgency as some patients appear to be delaying care during the COVID-19 pandemic.

“Overall, we have had a decrease in volume in the ER,” said Dr. Jennifer Gonzales, the stroke medical director at Cuero Regional Hospital. “Patients are waiting longer to come in and they’re coming in much sicker than if they had just come in when the symptoms started, and that’s for all diseases.”

Almost a third of American adults surveyed said they had delayed or avoided medical care because of concerns about contracting COVID-19, according to an April poll from Morning Consult and the American College of Emergency Physicians. A survey from the World Health Organization found major disruptions in health care throughout the world since the pandemic started. A third of the countries surveyed partially or completely disrupted services for cardiovascular emergencies.

Gonzales said if you think you’re ill, you should seek medical care, particularly if you are suffering what might be a stroke.

“The whole adage time is brain, and so the longer they wait to come in, the less opportunity we have to reverse the neurologic deficit,” Gonzales said. “Even if you’re wrong and they’re not having a stroke, it’s better to be wrong and be evaluated than to miss the symptoms and have a deficit that they can’t fix for the rest of their life.”

Gonzales said she and her colleagues at Cuero Regional Hospital, and health care providers throughout the region, have taken steps to limit the chances of transmission if you need to visit the emergency room. Most hospitals require patients and visitors to wear masks and do temperature and symptom checks for anyone entering a hospital facility, among other steps.

“We as providers, we’re taking all precautions,” Gonzales said. “You’re going to see us looking a little differently, under the mask and under the goggles, but we’re going to make patients feel as comfortable as possible, but really and truly care has not changed at all. If you think it’s an emergency, we’ll screen you and we’ll take the appropriate action.”

Goliad and Victoria counties were the only counties in region to report a new case of COVID-19 as of 6 p.m. Monday.

One Victoria County resident tested positive for the new coronavirus, local officials said. Since the pandemic began, 162 residents have been confirmed to have the disease. Of those, 142 patients have recovered. Seven people have died.

A Goliad County woman has been reported to have COVID-19, bringing the county’s total number of cases to eight.

The woman is isolating herself at home, County Judge Mike Bennett said Monday.

Details such as the woman’s age and condition were unavailable Monday.

What are the symptoms of a stroke?

'What's to stop it?' Victoria officials warn residents as COVID-19 continues to spread in region

Victoria health officials implored residents to not let their guard down as the COVID-19 pandemic stretches into the summer.