An Edna man was charged with murder after a woman was found dead Monday evening, police said.

Edna police arrested Augustine Tristan, 36, and booked him into the Jackson County Jail Tuesday morning, according to jail officials.

Edna Police Chief Rick Boone could not be reached Tuesday afternoon. It is not clear what time Tristan was arrested.

On Monday at 10:43 p.m., police were sent to a disturbance call at an Edna home at 407 N. Pumphrey St., according to a statement Boone provided the Jackson County Herald-Tribune.

Police discovered an unresponsive 48-year-old woman lying in the front yard. The woman, who is not identified in the post by the newspaper, was pronounced dead from her injuries. Indications of blunt force trauma were found, according to the statement.

Tristan was identified as the woman’s estranged boyfriend, and he became a suspect in the investigation, according to the statement. Police traveled to Tristan’s location, which is not included in the statement, and called SWAT members from Victoria to assist with the arrest.

Sheriff Andy “AJ” Louderback said the Jackson County Sheriff’s Office responded to aid in the arrest of Tristan. He also said Edna police are the lead agency in the case.

The Texas Rangers are assisting Edna police in the investigation.

Tristan was arrested and charged with murder, a first-degree felony punishable by 5 to 99 years in prison, if convicted, according to jail officials. His bond is set at $500,000.

In 2009, Ganado police arrested and charged Tristan with aggravated assault with a deadly weapon, according to court records. He was sentenced to 10 years of deferred adjudication probation.

In 2020, Ganado police arrested and charged him with assault causing bodily injury, according to court records.

In May, Ganado police arrested him on suspicion of interfering with an emergency request for assistance, accord to court records. Tristan pleaded guilty to that charge in July.

He also pleaded guilty to driving while intoxicated in 2008 and 2012, according to court records.

Jennifer Dailey, an operations captain with the Victoria Fire Department, talks with Giselle Juarez, 6, during the National Night Out event at The Vine School on Tuesday.

Jordan Sandoval, 11, wears a headset and sits in the passenger seat of a fire engine during the National Night Out event at The Vine School on Tuesday.

Giselle Juarez, 6, wears a headset while sitting in the back of a fire egnine with Lucy Stubbs, 9, during Tuesday’s National Night Out event at The Vine School.

Wes Welder, 4, puts on a pair of gloves while in the back of a fire engine during Tuesday's National Night Out event at The Vine School.

Emily Heinold, 12, worked quickly to apply condiments and wrap a steaming hot dog for a customer as dozens lined up at her booth. In her periphery, a lively block party in front of her school was underway.

Many kids drew on the sidewalk with chalk while others toured a 40-foot-long fire engine with a Victoria firefighter. Others, with hot dogs or snow cones still in hand, played tag with their peers as parents watched.

“It has been good,” said Emily, who attends the Vine School, a private school that specializes in supporting children who are on the autism spectrum or children with learning or speaking disabilities. The 12-year-old is president of the school’s newly formed student council, which helped provide the hot dogs for a fundraiser. “We have a lot of help putting this together, and it’s been great to see everyone here.”

The block parties were held in 12 locations in Victoria Tuesday evening as part of the Victoria Police Department’s National Night Out, an annual event seeking to build partnerships between neighbors and police in cities across America.

Last year, in light of the COVID-19 pandemic, the event rebranded to “National Night In,” and saw parades of local law enforcement traveling through the neighborhoods. This year, however, it was back in full force.

“It is great seeing the turnout for this. It is great, too, that our first responders make time in their schedules for this,” said Emily’s father, Erich Heinold, of Victoria.

The event has been held in Victoria for years, but Tuesday marked the first time the event was held at the Vine School. 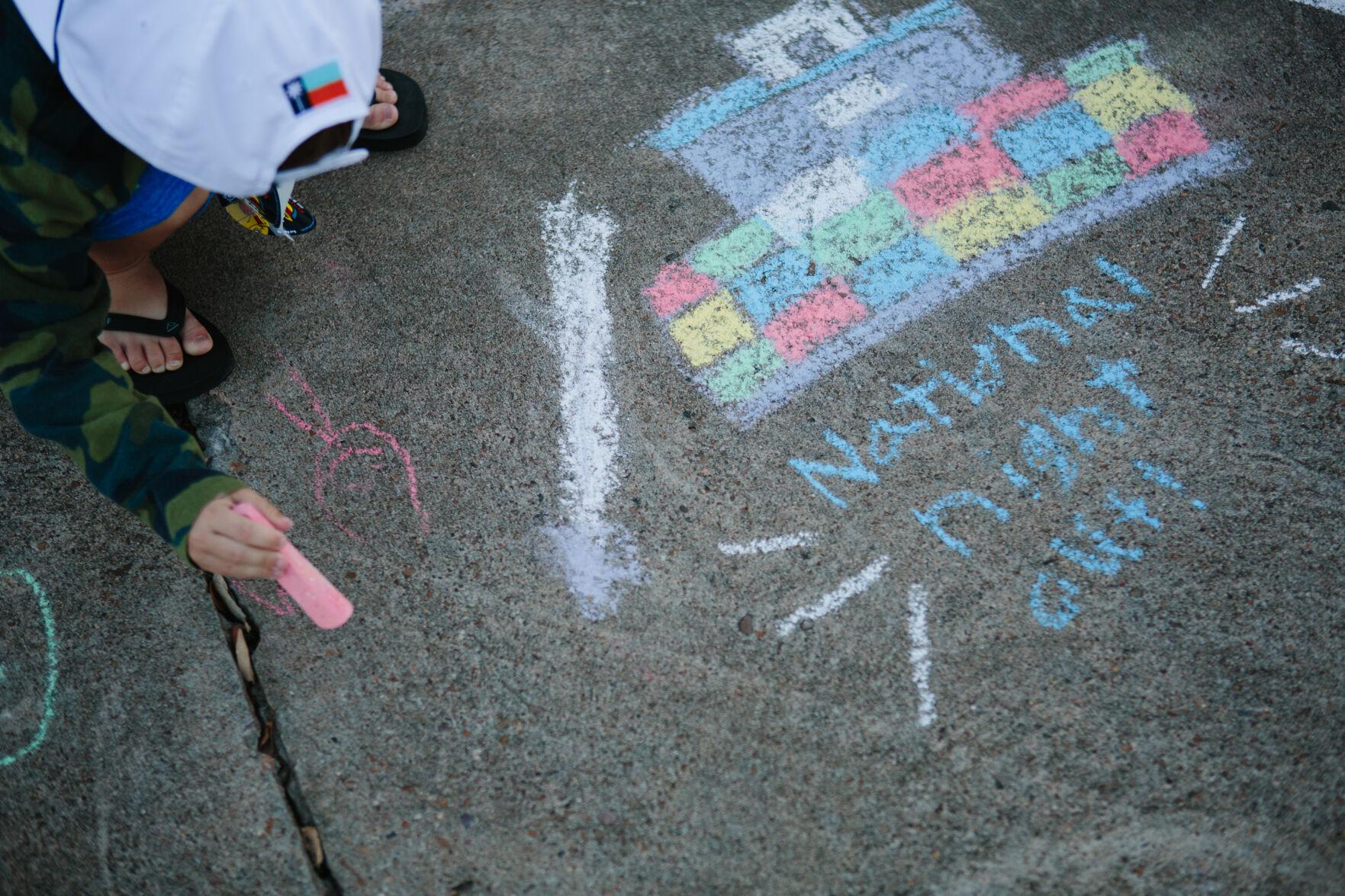 Rob Mallory, a state trooper based in Victoria with a son enrolled at the Vine School, said events like Tuesday’s are critical. He said it is important for law enforcement to be able to recognize and know the people in their community who have autism, communication disorders and other intellectual developmental disorders. Law enforcement officials that are able to recognize it are better able to serve the community, he said.

“It helps both ways,” said Mallory. “It helps police to interact with kids with autism or disabilities, so they are familiar, and vice versa for the kids. It is good for the kids to see that law enforcement officers are not mean or out to get them.”

“National Night Out is good for people to interact with law enforcement in general, but it is even more important here,” he added.

Erin Hatley, the executive director of the school, agrees. Also, she added, it is helpful for students to engage in a project — like the student council selling hot dogs — that sees them interacting with others.

“It is a win-win,” she said as one of the students drew on the sidewalk with a Victoria firefighter. “We are glad to see them come out and interact with kids. It is very heartwarming.”

Wrapping up what must have been her 20th hot dog sale, Emily looked forward to next year.

“It has been awesome,” she said. 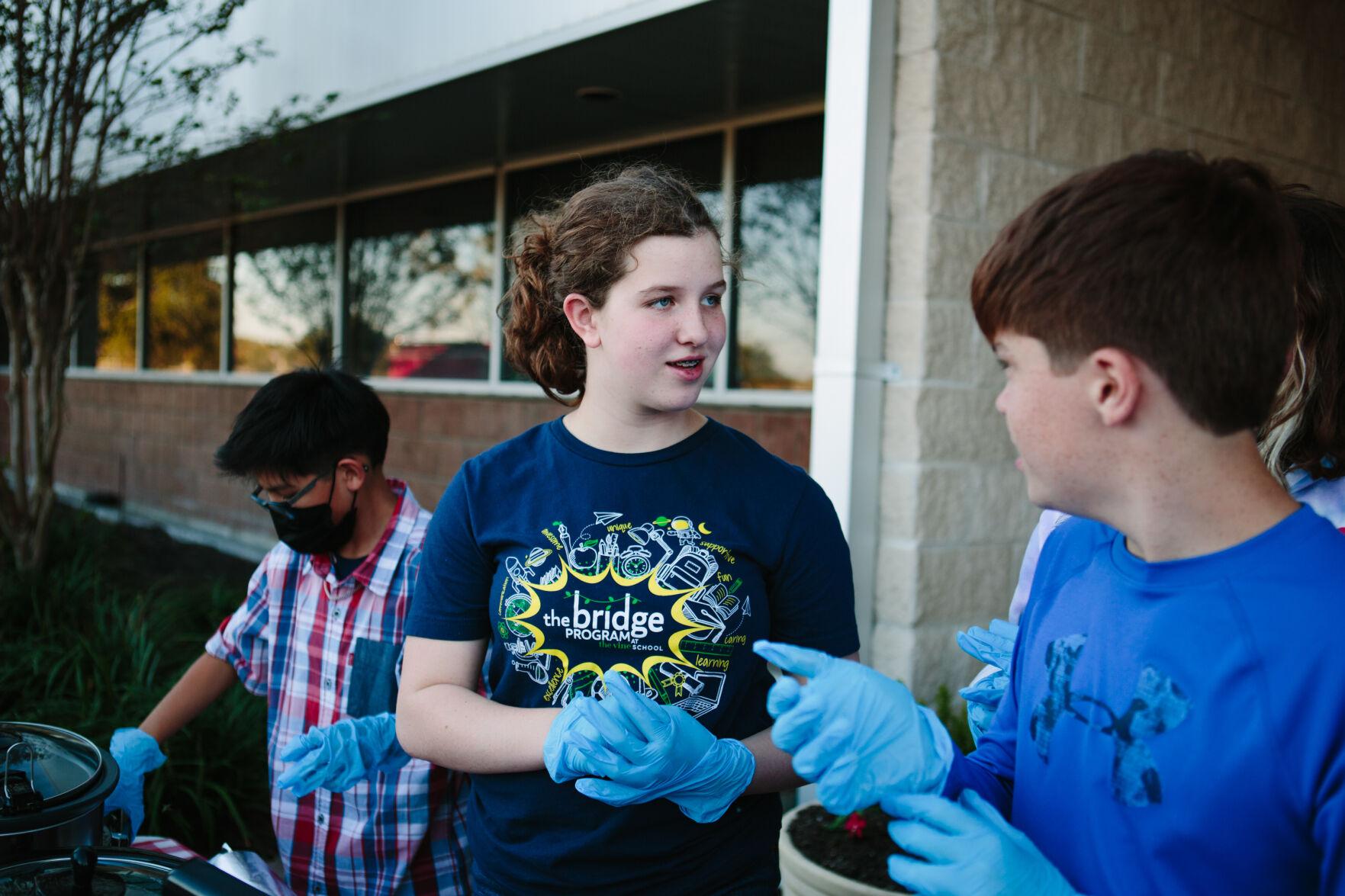 Emily Heinold sells hot dogs for student council during the National Night Out event at The Vine School on Tuesday.

The Vine School, which opened in 2008, is a special program for children with autism spectrum disorders and related communication disorders. The program is open to children age 2 through 18. Their mission is to create a customized learning environment and specialized teaching methods to serve those children.

The League of Women Voters Victoria and the Victoria Advocate will host a Victoria school district Community Forum from 6 to 7 p.m. Wednesday at the Victoria College Student Center.

The public can submit questions ahead of time by emailing lwvvictoriacounty@gmail.com.

Visit League of Women Voters Victoria on Facebook or Twitter to watch the forum virtually or for more information.

“We are hoping that the event informs voters ahead of the November election, so that folks know what is on the ballot,” said Lisa DeVries, voter services chair with LWV-Victoria.

The Victoria Independent School District superintendent, board and community PAC members will provide information at the event followed by a Q&A session.

Authorities obtained warrants for three people they say are connected to a Sept. 21 home invasion in Victoria that resulted in the death of one person.

Authorities have obtained warrants for three people they say participated in an apartment robbery that left one person dead in September.

Warrants have been issued for Michael Gleghorn, 19, of Mason; Julian Murillo, 22, of Refugio; and Luciana Murillo, 21, of Victoria, according to a Tuesday Victoria Police Department news release. They have been charged with burglary with intent to commit another felony and engaging in organized criminal activity.

Murillo was arrested Sept. 27 on the warrant charges, but Gleghorn and Murillo remained at large as of Tuesday afternoon.

The warrants come about two weeks after a home invasion robbery that ended in gunshots.

On Sept. 21, police were dispatched to Victoria Place Apartments, 701 E. Airline Road, where they found the resident of an apartment unit, Keanu Sanchez, 25, of Victoria, injured from a gunshot. Police also found Jacob Escobedo, 19, of Brady, who was also shot. He died at the scene.

Police have said Escobedo was part of a group that attempted to force their way into Sanchez’s home.

Anyone with information pertaining to this investigation is asked to contact Victoria Crime Stoppers at 361-572-4200.

Victoria County Animal Control employees raised concerns about the city’s proposal to extend the number of days an impounded animal must be held to at least five business days, during Tuesday’s City Council meeting.

“What we’re anticipating is it could cause some delays to lower priority calls,” said David Gonzales, director of the Victoria County Public Health Department, which includes animal control. “People may have to wait days or weeks before we get an opening in the shelter.”

The department is concerned the change could have a bottleneck effect, where, because of a lack of available space at animal control, officers would not be able to respond to calls regarding nonviolent strays or even take in new owner surrenders, he said.

City laws currently say impounded animals must be held no less than three working days. However, the input the city received during the town halls and surveys held last month suggested that the public would like to see that extended to at least five days, said City Attorney Thomas Gwosdz.

Animal Control only has 18 kennels in their facility, said Gonzales. Currently, they operate as an open intake shelter, where any animal in need of shelter is able to be accepted. However, if this change were to go into effect, it could require the shelter to switch to a managed intake.

“As far as overflow goes, there’s really no overflow capacity,” he said.

“One of my concerns with the five days is we also push back time in which a rescue can pull that animal,” said Jose Flores, the chief animal control officer.

Most rescues will not start looking at picking up an animal from animal control until after the impoundment period has ended, he said. The average length of stay for any animal in their facilities is five to six days right now. He expects that number to possibly double if this were put into affect.

The kennels do occasionally fill already, said Flores, and that is when you see animals begin to be euthanized. Animals that show any type of aggression, unhealthy or elderly animals and owner surrenders are the animals usually prioritized to be euthanized to make room for new intakes, he said. Animals that are surrendered by their owners do not have to be held for three days before they can be disposed of because they immediately become the property of animal control, said Flores.

The Council did not make a decision Tuesday night on whether they would shorten the required number of days or not. The ordinance will have a second and third reading before it is finally approved and goes into effect.

“This is a great opportunity for citizens to contact commissioners court for an expansion to accommodate this,” said Mayor Jeff Bauknight.