Alfred Jones, 60, crosses the street to reach H-E-B. Jones prefered crossing the street from Jack in the Box instead of the crosswalk due to the heat.

Police have not issued any tickets since the completion of a million-dollar crosswalk project in Victoria despite routine jaywalking in the area.

In a 45-minute period Monday afternoon, several people walked across busy East Rio Grande Street toward a nearby H-E-B store, 1505 E. Rio Grande St. The new crosswalk, which was part of a recently completed traffic light project that cost nearly $1 million, is just a short walk down the street and forms an intersection at Azalea Street. It remained barren of foot traffic in the same time frame.

The pedestrians encountered Thursday explained why they chose to cross the busy highway, Frogger style, from the vicinity of an adjacent Jack in the Box, rather than to walk down to the crosswalk for safe passage. Meanwhile, Victoria Police Traffic Safety Sgt. William Bernard and Mayor Jeff Bauknight continue to urge pedestrians to use the crosswalk or perhaps face paying a citation, or worse, getting hit by a vehicle. 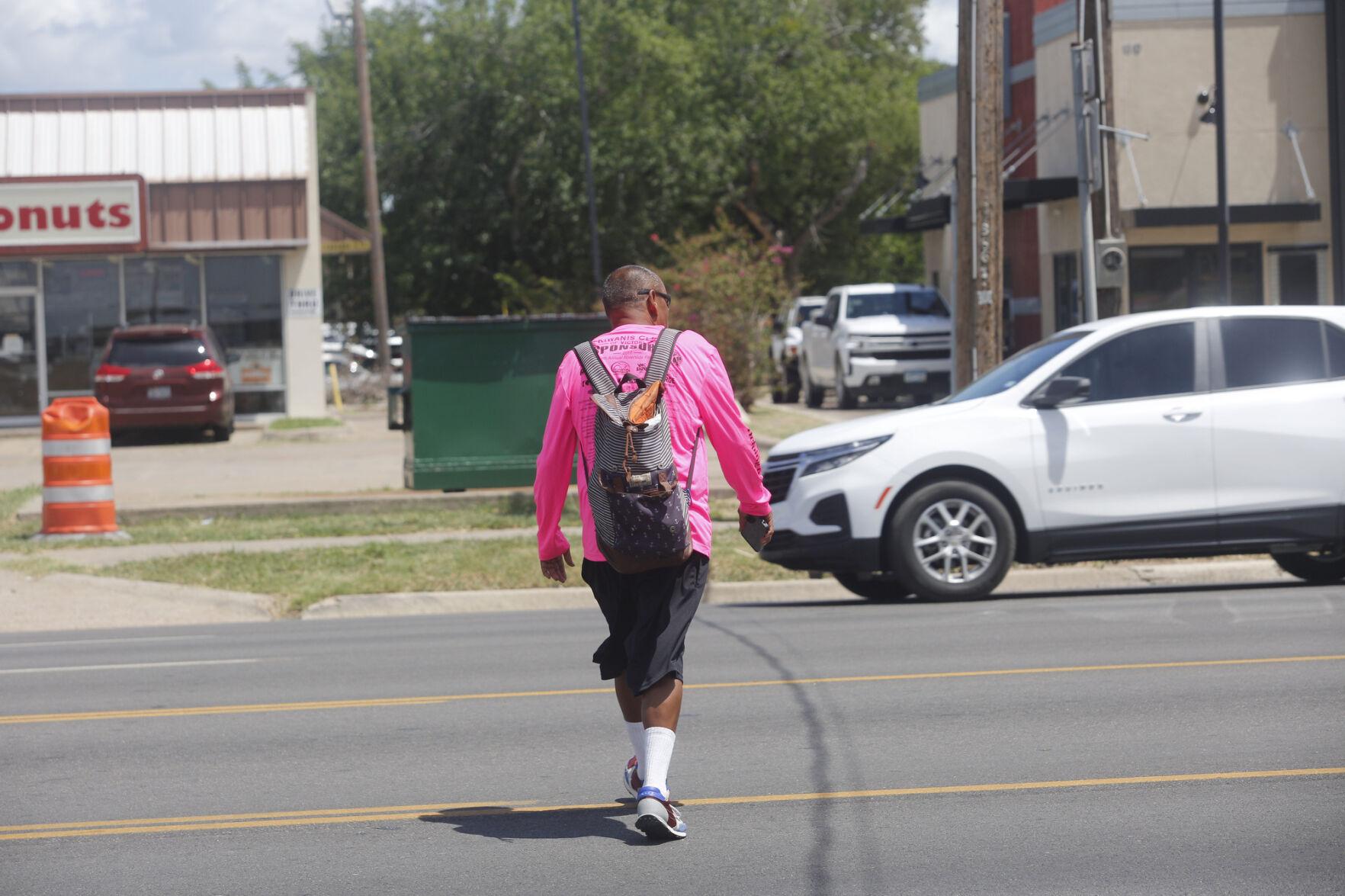 Junior Ramirez, 56, crosses the street on East Rio Grande Street to reach his apartment. Ramirez prefered crossing the busy road instead of using the crosswalk further down the street because it’s more convenient for him.

According to Victoria Police Department records, from Jan. 1, 2018, to July 11, a total of 14 tickets had been issued for jaywalking in Victoria. Six of those tickets were issued on East Rio Grande Street. None of those were issued in the area of the H-E-B or the new traffic light.

Police could and should soon step up jaywalking citations in that area, Mayor Jeff Bauknight said Thursday afternoon.

“I’ve asked the police chief to issue more jaywalking tickets,” Bauknight said. “I would ask people to please consider if the quicker route across the street is worth risking their lives.”

Where are they coming from?

Junior Ramirez, 56, of Victoria, said he lives in Crossroads Apartments, 1602 N. Azalea St., behind the Jack in the Box. He crosses the busy roadway down the street from the crosswalk for convenience.

“It’s hot out here, and I have ice in my backpack,” Ramirez said. “I’m not going to walk down there when I can cross right here.”

Alfred Jones, 60, also said he lives in the Crossroads Apartments and said he, too, opts for the closer crossing without a crosswalk from Jack in the Box to the H-E-B. He also cited the heat.

One woman, Destiny Aultman, crossed the busy road with headphones in her ears. Some vehicles had to wait for her to clear the turn lane before they could enter the Jack in the Box parking lot.

Another woman, who declined to give her name, said “I have chronic pancreatic issues, and I just want to get over there quickly and get my medication.” She was referring to the H-E-B pharmacy as she hurried by, wiping sweat from her face. She also came from the direction of Crossroads Apartments.

Jessie Amador, a manager at H-E-B, said the foot traffic has not abated since the traffic light and crosswalk were installed and blamed it on the open field behind the Jack in the Box. 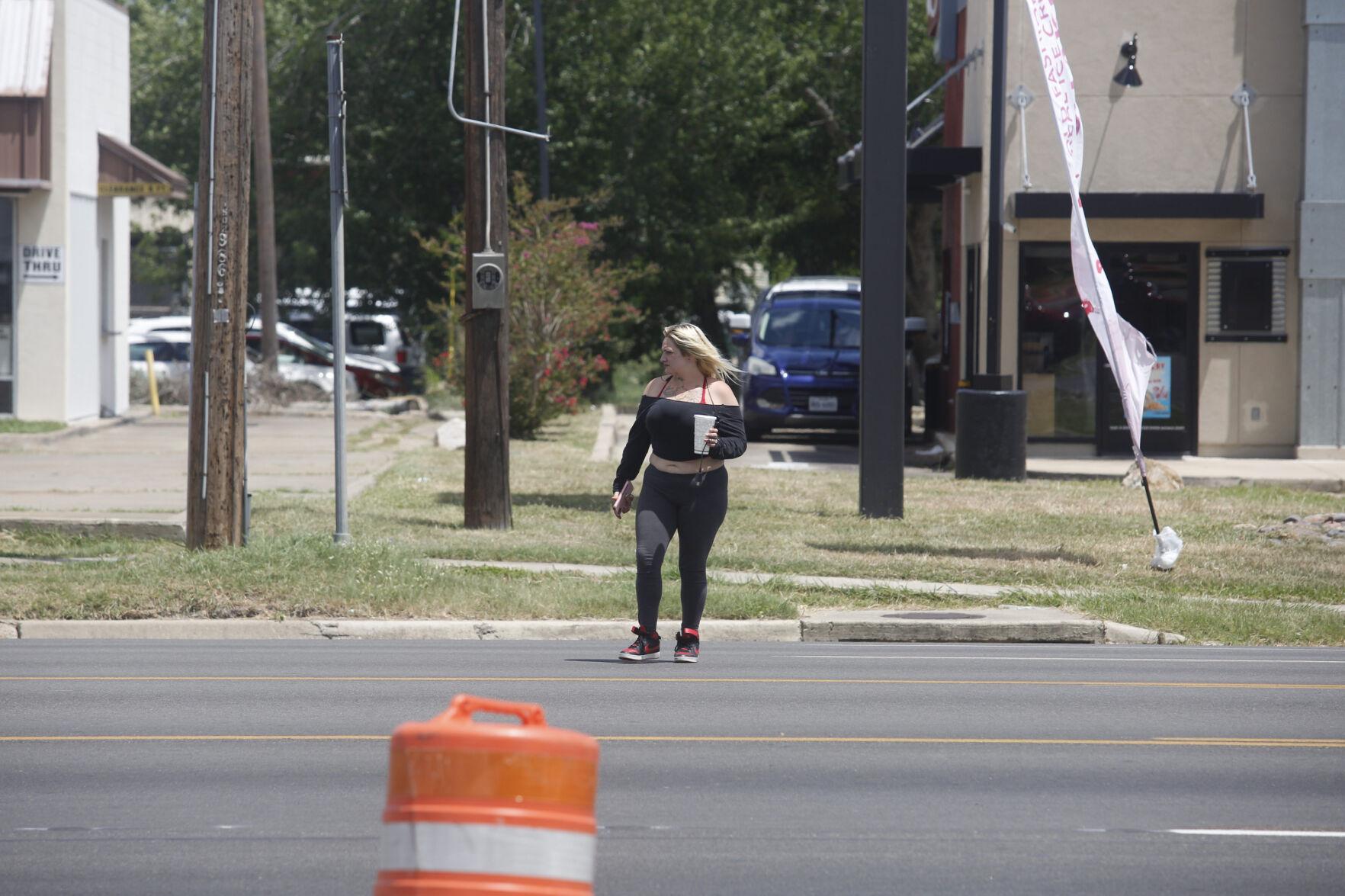 Destiny Altman also prefers crossing the street from Jack in the Box on Monday afternoon.

Bauknight said the city is working with Jack in the Box in the hopes of building a fence behind the fast food joint to discourage jaywalking. He also said he wants more tickets issued for the crime.

Bernard added the median project on Rio Grande will continue from Navarro down the length of the street. He said he hoped this will prevent some crashes, but doubts it will discourage jaywalking.

Why is it called jaywalking and why is it illegal?

Crossing the roadway without a crosswalk, through traffic, is popularly called jaywalking.

A chapter of the Texas transportation code directs pedestrians to cross roadways at crosswalks. A section of that chapter says a pedestrian shall yield the right of way to traffic when “crossing at a point other than a crosswalk.”

The point other than a crosswalk can only be an intersection, according to the law, making walking across the street without an intersection unlawful, and dangerous, Bernard said.

A pedestrian who causes a crash by crossing a roadway illegally can be held accountable for damages or injuries under Texas law.

Jaywalking, according to Merriam-Webster’s dictionary, comes from the root “jay,” which means “greenhorn” or “rube.” A rube is also known as a “country bumpkin.”

The word apparently has its origins in New York City where residents would become frustrated by “rube” drivers using the wrong side of the road, causing problems for oncoming traffic.

These drivers were called “jay-drivers,” according to Merriam-Webster. Soon, walkers disrupting traffic by also using the wrong side of the road were called jaywalkers.

“It is unclear why jaywalker shifted its meaning and survived for more than a hundred years now, while jay-driver languishes in obscurity,” according to Merriam-Webster.

The root “jay” is variously defined as referring to someone who is a “dullard,” or a “simpleton.”

The people who attempt it, mostly make it safely across. Bernard said most pedestrian versus vehicle crashes in the H-E-B area happen in the parking lot.

“The main thing is pedestrian safety,” Bernard said. “People from those neighborhoods back there will cut straight across Rio Grande. It’s a busy street, and drivers don’t always watch for pedestrians.”

Victoria’s mayor said the public library will remain in its building at a Tuesday council meeting, a day after county commissioners said they could evict the library unless a complaints about controversial LGBTQ books were reviewed.

With several citizens speaking about the library to the Victoria City Council, Mayor Jeff Bauknight addressed the comments from the Victoria County Commissioners Court’s Monday meeting and assured those in attendance the library wasn’t at risk of eviction. Bauknight also said the city council would discuss possible solutions at the next meeting.

The Victoria Public Library resides in a building at 302 N. Main St. that is owned by the county.

Citizens’ comments included praise for the library for creating an inclusive environment, requests to tone down the rhetoric around the controversial books as decisions are made and concerns for what children are exposed to at the library. Some citizens said parents should be responsible for what their kids read in the library.

“There is zero interest in evicting the city or the library,” Bauknight said, noting County Judge Ben Zeller talked to city officials that morning saying the county would not be evicting the library from the building. “The county was just made aware of these books yesterday and feeling impudent. I’m sure heated comments were made.”

A group of Victoria residents had originally submitted 43 formal citizen request forms for reevaluation of library materials in the summer of 2021. The library’s director denied the requests to remove the materials or move them to a designated area in the library.

All of the books held by the library require a child’s parents to sign them out, Victoria Library Director Dayna Williams-Capone previously said. She said the library needs to retain such books because they are written for often-marginalized communities in Victoria.

The council will discuss possible solutions to address the controversial books at their next meeting, Bauknight said.

One solution Bauknight would like to see discussed is an updated policy on books categorized in sections for readers 17 years and younger with library staff developing and presenting it to the library advisory board, he said.

Bauknight had no standing opinion on Tuesday but suggested there be an updated policy in place by the end of September. If that time frame is not met, Bauknight said the council could consider a resolution to freeze additions to the library’s collection.

“We can all decide on what’s appropriate or not, and we may have differing opinions on that, but we still need a written definition on what those books mean,” he said. “We also have to make sure we don’t trample over First Amendment rights, but we need to do it in a manner that protects our children. That’s what this is about — being the adult in the room and providing guidance and protecting children.”

A man who was shot days earlier has died of his wounds, police said Tuesday.

Jared Michael Gomez, 24, of Victoria, was shot Saturday after an argument at a Victoria nightclub, said Senior Police Officer David Brogger, in an email.

The people involved in the argument left the nightclub in separate vehicles.

Gomez was a passenger in one of the vehicles and was struck by the gunfire. He was taken to a Victoria hospital in a private vehicle, Brogger said.

He was later taken to a San Antonio hospital for treatment but died there of his wounds.

Brogger did not say when Gomez died.

Gomez’s family members could not be reached for comment.