After last week’s meeting was canceled due to the extreme winter weather, Victoria County’s commissioners will reconvene Monday morning.

Among the items on the Commissioners Court’s agenda is a resolution to oppose a pair of bills filed in the Legislature that would ban the use of taxpayer funds for lobbying by county and local officials.

The legislation would prevent Victoria County from lobbying through associations like the Texas Association of Counties and the County Judges and Commissioners Association of Texas. County Judge Ben Zeller said this would make it harder for local officials to monitor bills that could affect their constituents.

“Taxpayer lobbying is about 10% of overall lobbying efforts,” Zeller said last week. “The corporate and special interests are still given free reign, but we’re being targeted as if we’re the bad guys. That makes no sense.”

The author of the House version of the bill, Rep. Mayes Middleton, R-Wallisville, previously told The Advocate up to $41 million in taxpayer money is spent on lobbying annually, a figure he said he wants to slash.

Also on Monday, the Commissioners Court will receive for the record an application submitted by Union Pacific Railroad Company to the Federal Communications Commission related to a train control tower proposed for construction in Placedo.

Union Pacific has submitted a Section 106 filing to the FCC, which is part of the federal government’s environmental review process. This process is intended to ensure that applicants adequately protect historic and environmental resources, according to the FCC’s website.

Anna Claire Miori, 14, watches her step as she makes her way into a makeshift chicken coop on her family’s property in Nursery. “We have heat lamps, electric space heaters and propane space heaters to keep the chickens warm,” Anna Claire said Friday. “And if it gets hot we have insulation, air conditioning units and fans.”

Luke Miori, 10, bends down to feed the chickens in a different chicken coop on on the family property in Victoria. “They drink a lot of water. They eat a lot. They were very scared of us whenever they’re younger,” Luke said Friday. “And then they get used to us and they’re not scared of us anymore.”

Luke Miori, 10, pets one of the chickens inside of the coop on the family property in Nursery.

A chicken stays warm underneath of a heat lamp on the Miori family property in Nursery.

Luke Miori, right, helps his mom Amy Miori carry a container of water toward the chicken coop on the family property in Victoria.

Luke Miori, 10, dumps water in a water dispenser for the chickens on the family property in Victoria.

The process to raise and nurture animals included extra challenges for contestants in the 75th annual Victoria Livestock Show this past week.

While most of the worry throughout the week was focused on keeping humans warm, area livestock show contestants kept their attention on keeping their animals safe. It required some innovation through alternative heaters, water and constant monitoring.

Much of the infrastructure buckled under frozen conditions that began Feb. 14. For the Miori family, who are members of the Nursery 4-H Club, it was their mission to not let their show chickens and heifers do the same.

To ensure their roughly 100 chickens were safe from the weather, siblings Anna Claire, Luke, Megan and James Miori took shifts throughout the night monitoring their chickens.

“There was one time when the temperatures had dropped 10 degrees in 20 minutes,” Amy Miori, the children’s mother, said. “We were constantly monitoring the temperatures.”

Their makeshift setup included an about 60 square-foot chicken cage they moved inside. 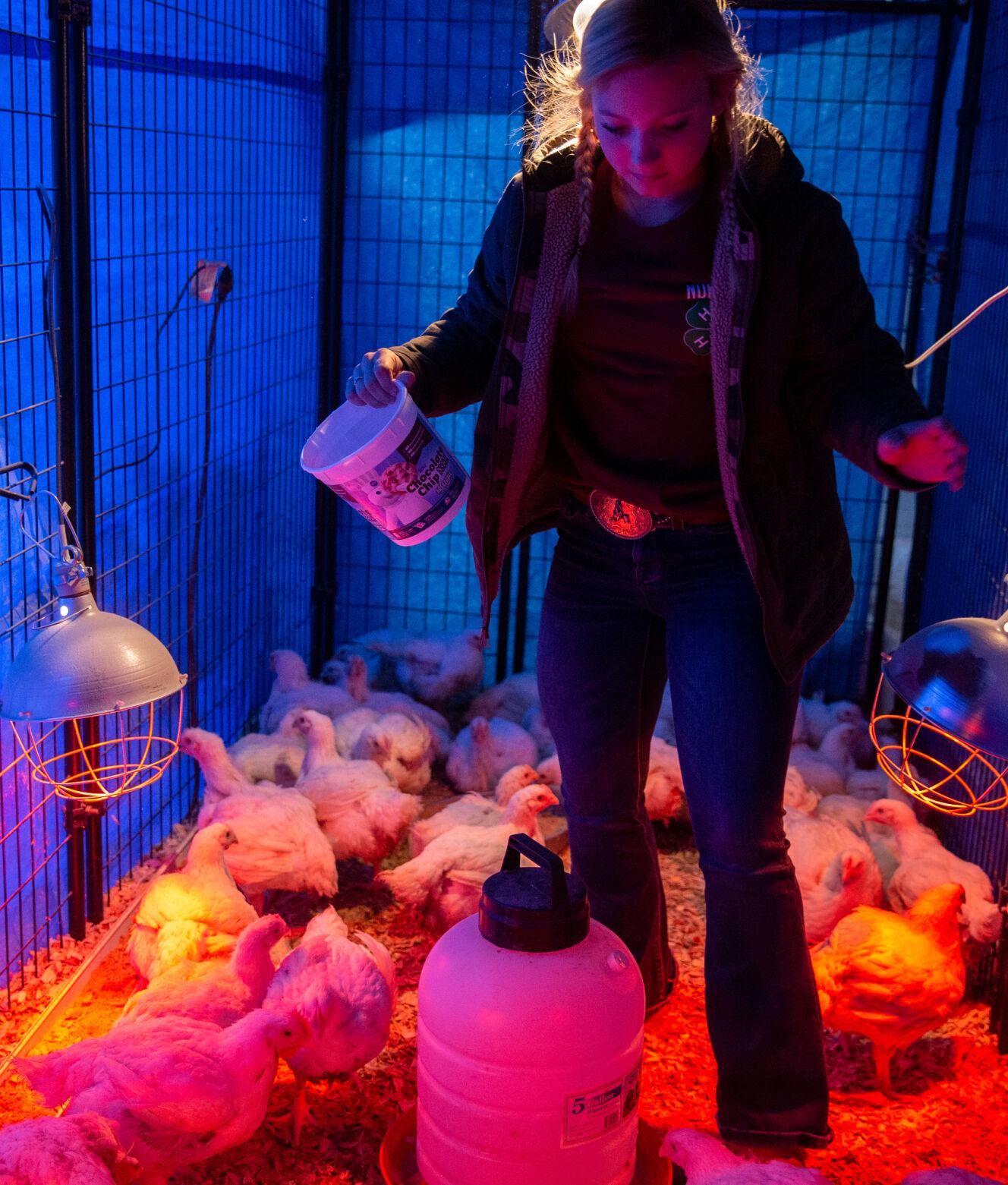 Anna Claire Miori, 14, begins to exit the chicken coop after feeding the chickens on the family property in Nursery. The chickens came from Texas A&M University, she said. “They’re bred for meat specifically. They can’t lay eggs because of what they were bred for.”

The family used heat lamps and space heaters to provide warmth. They wrapped the cage in tarps to keep the warmth in.

When the electricity went out, they had to use propane heaters, which they had already filled before roads were closed.

Toward the end of the freezing weather, Amy Miori said the family lost six of their show chickens, possibly because of too much heat.

When the electricity went out, so did the means to get water from their well to the spigot. Because of this, the family had to haul about 10 gallons of water to the chickens everyday.

Water was also a concern for Cody Robles and his two sons and two daughters who are members of the Bloomington 4-H Club.

Robles’ grandparents did not lose water unlike he did. So he and his children took “whatever they could get their hands on” to bring back drinking water for the show pigs they are raising.

“With it being so close to the show, water intake is a huge deal for them to keep eating and keep their weight up,” Robles said of the family’s show pigs.

Other Bloomington 4-H members could not supply water to some of their pigs for 24 hours, Robles said.

As some of the Robles family’s 26 pigs struggled to stay warm, a few fell ill but have mostly gained their health over the weekend.

Industrial Junior High eighth-grader Bo Neill said for his steer and commercial heifers, the past week could have been a lot worse.

Bo, who is also a member of the Inez 4-H, said he and his family were prepared with gas-powered electricity generators, propane heaters and plenty of feed.

As the cold weather persisted, the cattle needed more feed to stay healthy.

One of the cows he is not taking to the livestock show also gave birth just before the freezing rain began.

Bo had to spend more time checking on the calf to make sure it was warm and healthy. Calves are usually more susceptible to extreme winter weather than grown cattle, he said.

Neither the Robles family nor Neill lost any animals during the week of freezing temperatures.

Even walking to the barn was one of the hardest parts about caring for the Robles family’s show pigs during the week as ice and snow covered the ground for days, Robles said.

Despite the stress felt by many livestock raisers, Luke Miori said he didn’t think it was so stressful. He enjoyed the snow.

The 2021 livestock show began Saturday with the commercial heifer show, but the other judging events begin Thursday and run through Sunday. None of the events are open to the public this year because of COVID-19 protocol.

Also, there are no public events, such as the commercial booths, carnival, live music or beer garden, because of COVID-19 safety restrictions.

The livestock show auction on March 1 will be hosted live and virtually.

Victoria city residents no longer have to boil water to drink or cook with it.

The boil water notice, which had been in place since Tuesday evening, was lifted Sunday evening by Victoria city officials.

Water pressure for city water climbed back to about 50 to 60 pounds per square inch Saturday, according to a news release Saturday. The city then sent water samples from across the city to a Texas Commission on Environmental Quality lab for testing before the water boil advisory could be lifted.

The city’s water system is also “up and running at 100%,” Victoria City Manager Jesús Garza said in a news briefing on Sunday after about 72 hours of varying low water pressure in different areas of Victoria.

Households that still do not have water are likely experiencing hidden leaks or localized water line breaks, according to a city news release. Some water leaks and outages occur even in a normal situation without unprecedented weather conditions, Garza said.

After receiving 16 pallets of bottled drinking water, distribution of useable water doubled between Saturday and Sunday, Garza said. The city sent this water to food banks, churches, hospitals, Victoria College and the University of Houston-Victoria.

DeTar Hospitals and Citizen Medical Center have normal water pressure and are operating as they were before the winter storm. They now have adequate supplies of drinking water, McCoy said.

On Sunday, six of 722 water meters were shut off by the city. Garza said the city will continue to shut off water meters without charge for the remainder of February.

“There’s always some type of break or leak that’s taking place in a moment’s time,” Garza said. “But staff has addressed all of the major breaks and leaks.”

Looking to the future, Garza said city staff will conduct a review and analysis of physical infrastructure, processes and procedures of the city water system.