A mobile home fire on Northside Road on Sept. 23 was investigated by the Victoria County Sheriff’s Office as an arson and murder scene.

Authorities suspect a Thursday morning fire at a Victoria County mobile home was set to destroy evidence of a homicide.

The identity of the deceased person, who was found inside the mobile home, was not determined Thursday.

Franklin, who declined to go into detail about the condition of the body, said authorities are awaiting autopsy results from the Travis County Medical Examiner’s Office to confirm the person’s identity.

The large, yellow single-wide mobile home at 1181 Northside Road where the fire took place was cordoned off by caution tape, but the right half of the home was severely burned, and the upper edge of the building, just under the roofline, appeared charred.

“In the course of working the fire, evidence was uncovered that the Victoria County Sheriff’s Office is now working as a probable homicide and arson,” Franklin said.

Franklin declined to detail the evidence, citing an ongoing investigation.

The mobile home that caught fire is located within a small compound containing several smaller trailers surrounded by a wooden fence. Franklin said the entire property has just one owner.

According to drivers license and appraisal district records, the property’s owner also lives at that address.

That owner could not be reached by phone Thursday.

Robert Higdon, who lives near the scene of the fire, said he had to shut the door of his home to prevent it from filling with smoke.

“You couldn’t even see the second house, is how dark it was,” Higdon said, pointing toward another home located slightly farther away. “I saw a lot of smoke and a lot of fire.”

Later in the day, Franklin said the Texas Rangers and Texas Fire Marshals Service arrived to assist the investigation.

Portrait of Greg Najvar in front of a fire truck at the Lone Tree Volunteer Fire Department on Thursday.

Greg Najvar holds his badge for one of his current roles at the Fort Bend County Fire Marshal Office on Thursday.

As a boy, the medical drama and action-adventure television show “Emergency!” was a regular pastime in Greg Najvar’s childhood home.

The show’s heroic display of paramedics and firefighters in the Los Angeles metropolitan area was inspirational to Najvar as a young boy, he said. Specifically, one of the lead characters, played by actor Randy Mantooth, was an idol to him.

“They always rode in to save somebody and save the day. There was always a happy outcome. I knew at a young age that I wanted to do that,” said Najvar, now 57. “I had two goals: Get Mantooth’s autograph, which I already did, and do what they did in the show in real life.” 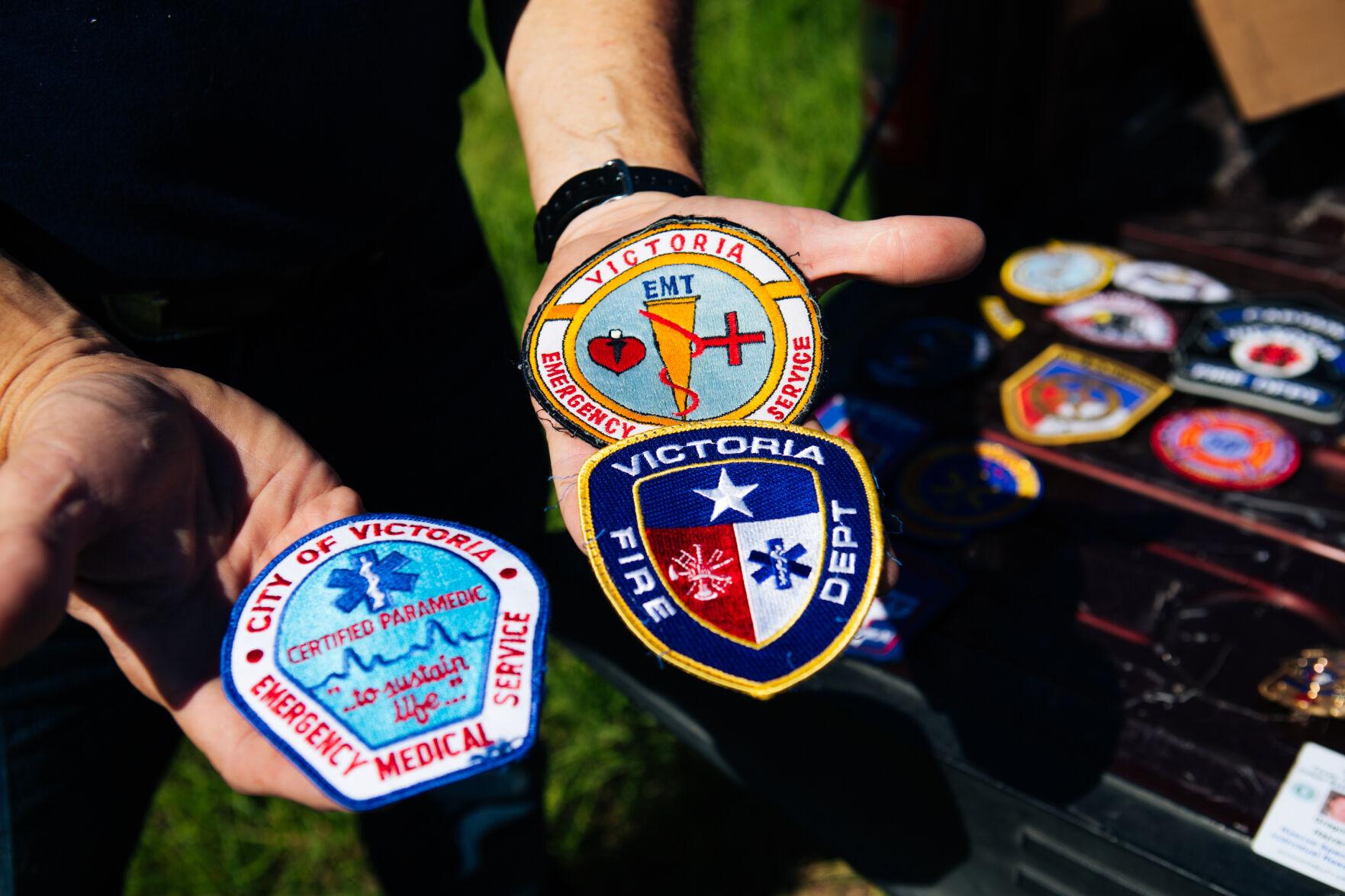 Greg Najvar holds some of his patches in front of the Lone Tree Volunteer Fire Department on Thursday.

After graduating high school, the Shiner native went on to become a paramedic, kicking off a sprawling career that has taken him all over the Crossroads, the state of Texas and, in some cases, out of state to respond to emergencies big and small.

These days, his life’s mission is to pass on his experience to the next generation of emergency medical responders and firefighters.

Colleagues have said he has clocked thousands of hours in training, leading them to believe he could be one of, if not the most, experienced emergency medical and firefighters in the Crossroads.

“His dedication to the work is impressive,” said Rafael DeLaGarza III, a Victoria city coouncilmember who retired as a captain and training officer for the Victoria Fire Department after 31 years. He was once Najvar’s direct supervisor when he worked for the city. “Some paramedics do the minimal amount of work on a patient when they are close to the hospital. Greg is the type of paramedic that will work in that back of the ambulance — no matter the distance — until the patient is being unloaded into the ER.” 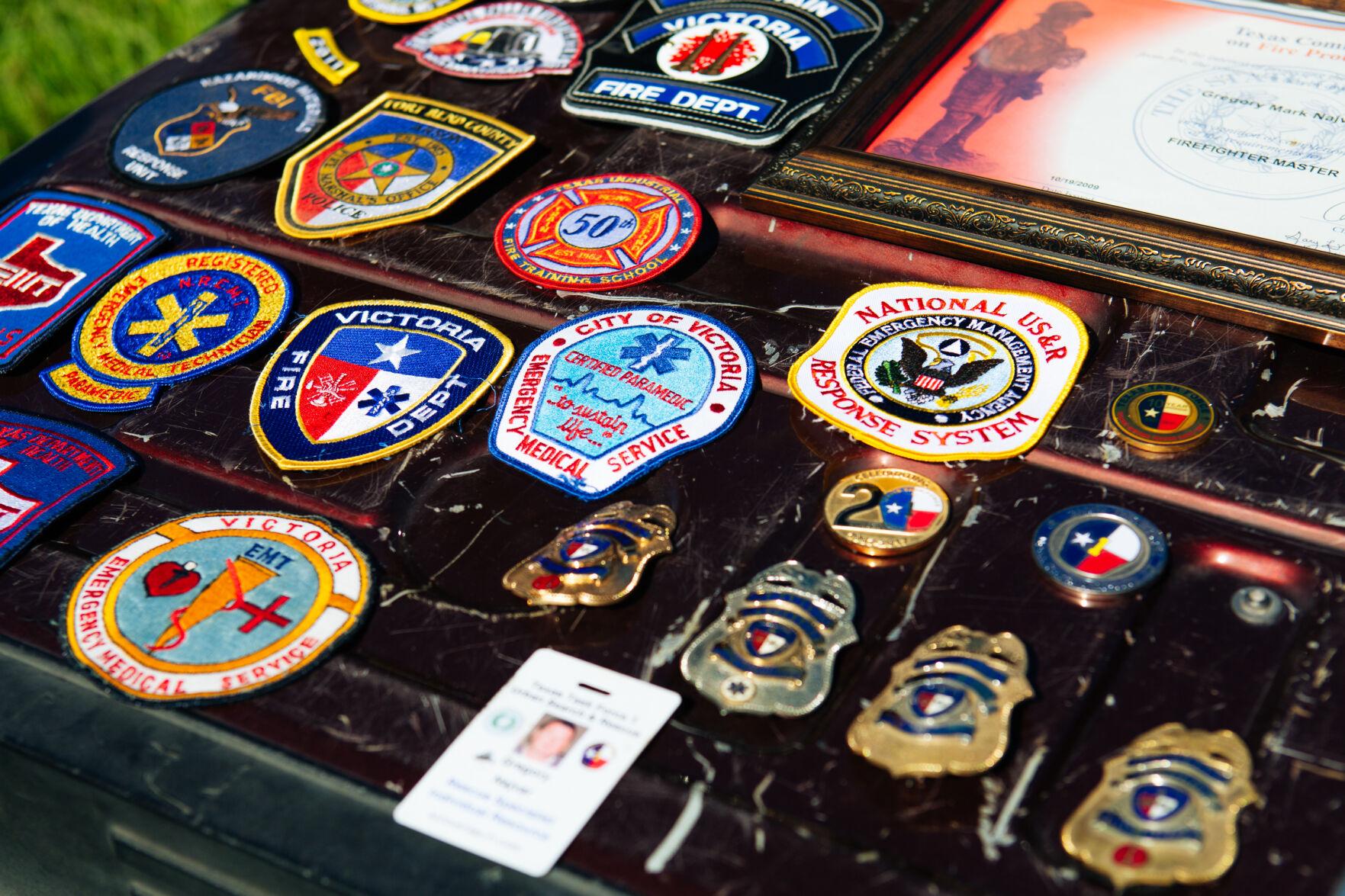 Greg Najvar's patches, challenge coins and badges lie on the bed of his truck in front of the Lone Tree Volunteer Fire Department on Thursday.

Najvar currently works for the Fort Bend County Fire Marshal’s Office as a hazmat technician while also volunteering for the Lone Tree Volunteer Fire Department in Victoria County. Before that, he landed his first job in 1989 as an emergency medical responder for the City of Victoria, which, then, had separate departments for fire and emergency medical response.

He worked for the Victoria Fire Department for 25 years, seeing the merger of EMS and fire services in the 90s and helping with internal training throughout.

Najvar also became an adjunct instructor for Victoria College in 1991 and has taught various EMS courses. He is passionate about educating the “lifesavers of tomorrow,” as he affectionately refers to his students.

He also makes sure that the gravity of the job is not lost on his students. He admits he is a tough instructor and is not afraid to dock points for missing steps or forgetting procedures.

“When we make mistakes, people die. I make sure they don’t forget that,” he said. “I can be hard. I’ve had people say they don’t like my style and that I come off as rude, which I can understand. I like to think I am as nice as I can be while also being a realist about this line of work.” 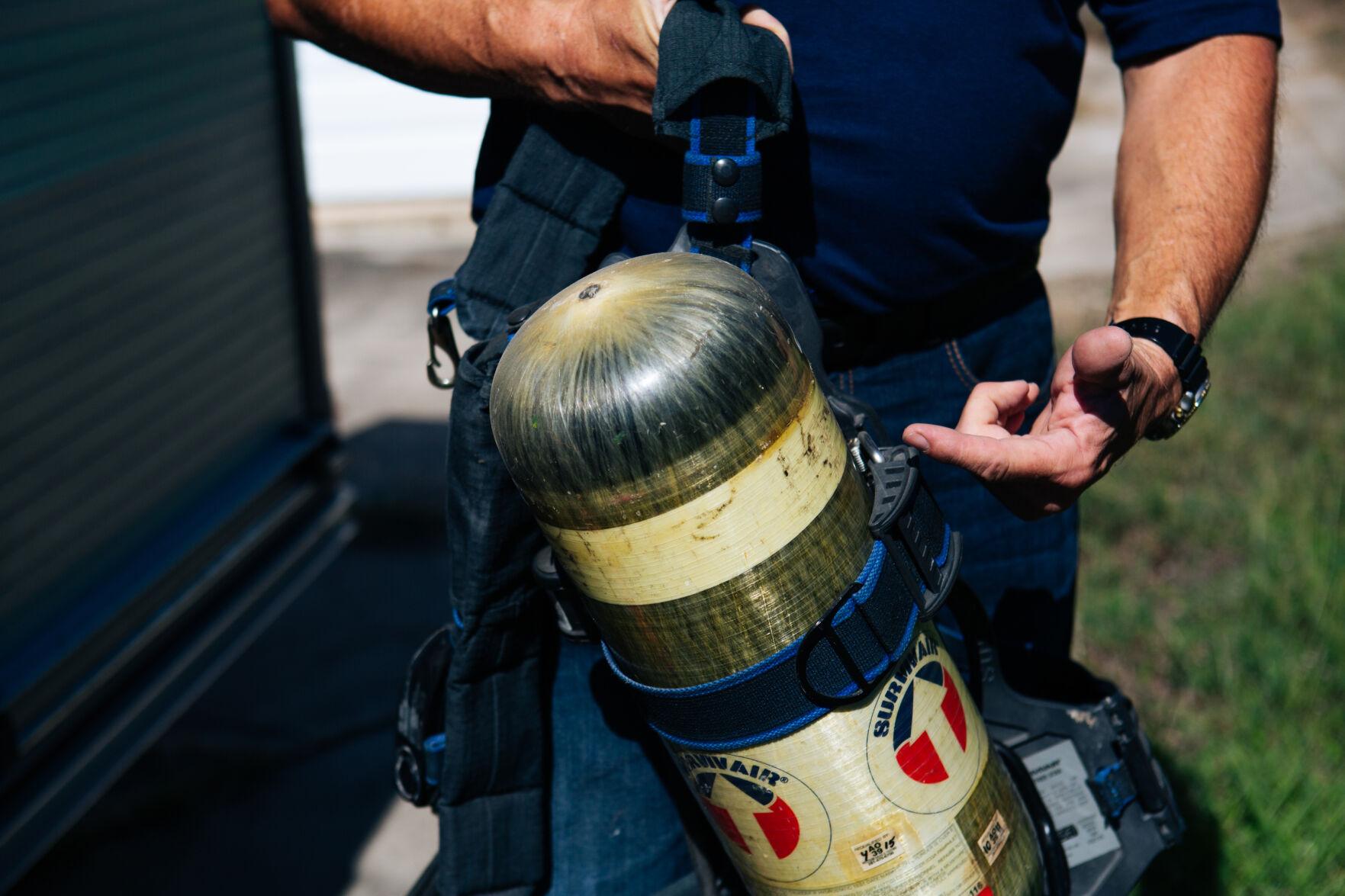 Greg Najvar holds one of the air tanks used by the Lone Tree volunteer firefighters outside the fire station on Thursday.

In addition to his work locally, Najvar has served as a rescue specialist with the Urban Search and Rescue Texas Task Force 1 since 2002, responding to all matters of natural disasters, including various tornados and hurricanes Katrina, Dolly, Gustav, Ike, Harvey and, most recently, Laura.

He’s been a critical part of that team, said Stephen Bjune, a public information officer for the state task force.

“We take the best of the best from departments in our region,” he said. “He definitely fits the bill.”

Although not every call for service has had a happy outcome like his favorite television show, Najvar couldn’t see himself doing anything else.

“I’ve lived for the work,” he said. “It’s a calling I have answered like many other people before me. It’s a calling that will motivate people after me, too. I aim to provide them the tools and skills they’ll need.” 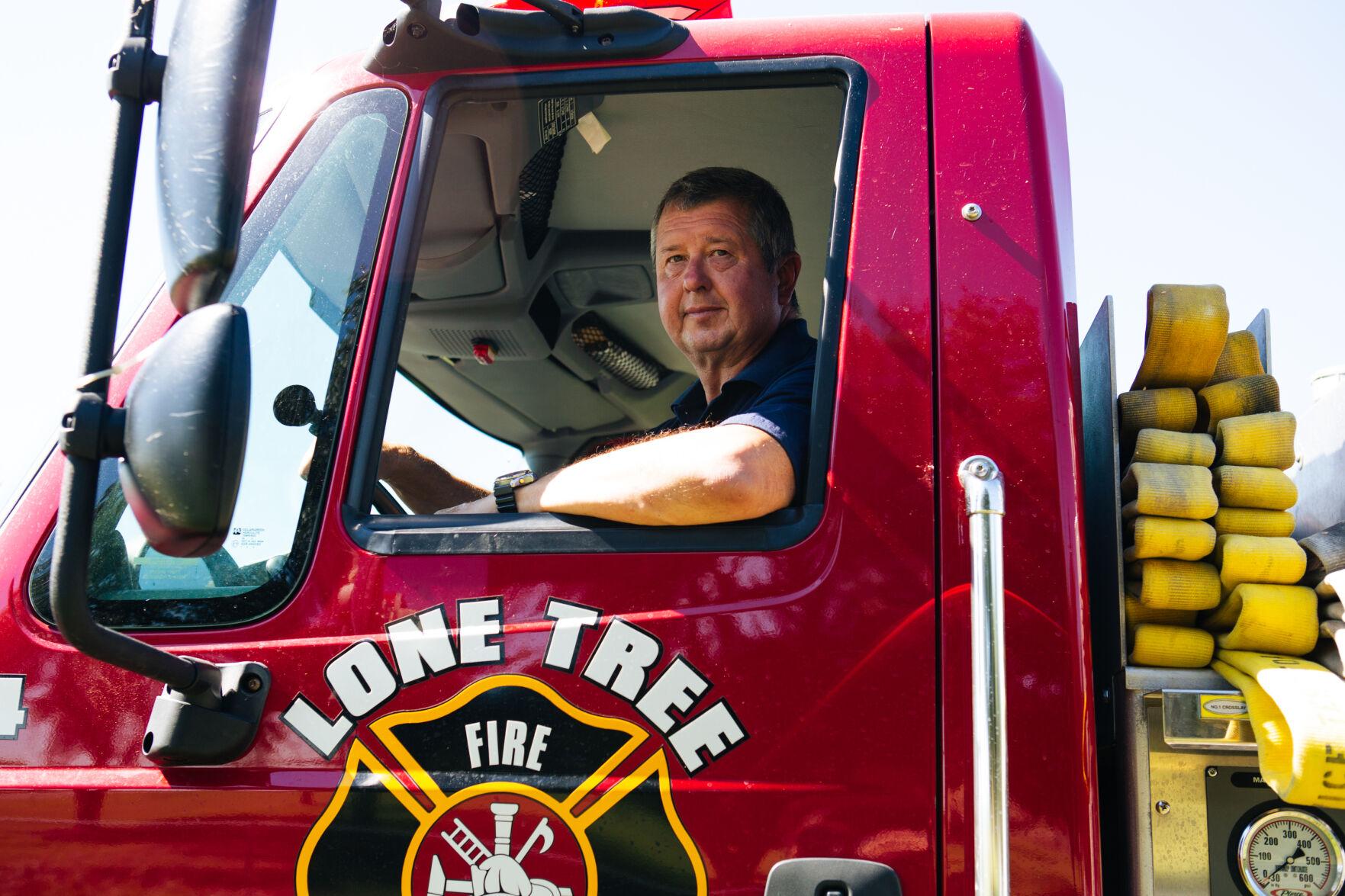 Portrait of Greg Najvar in a fire truck at the Lone Tree Volunteer Fire Department on Thursday.

Texas A&M Task Force 1, which Najvar has been a member of since 2002, functions as one of 28 federal teams under the Federal Emergency Management Agency FEMA’s National Urban Search and Rescue System and as a statewide urban search and rescue team under direction of the Texas Division of Emergency Management. The task force also coordinates the state’s swiftwater rescue program and the helicopter search and rescue team which works in conjunction with Texas Military Department.

Since 1997, the task force has served the state of Texas and the nation by participating in over 100 deployments, completing search and rescue missions with highly trained and qualified personnel.

Miranda Wallace, owner of Sweet and Savory Bakery and Bistro, mixes batter in a 2018 photo.

Homemade, handcrafted bread will be on the menu starting Friday with the soft opening of a new Victoria café.

Sweet and Savory Bakery and Bistro will feature a lunch menu including patty melts, hamburgers, Philly cheesesteaks and other sandwiches — all on delicious, homemade bread, said owner Miranda Wallace.

The café also will feature other items, such as the chicken salad, made from local-sourced ingredients. Coffee also will be served.

“I actually teamed up with local farmers to get my meat,” she said. “We’re using Heritage Acre Farms for our chicken and Turkey Hollow Farm for our ground beef.”

The soft opening on Friday is designed to hammer down any issues so that the restaurant can present its best face to the community, Wallace said.

“It’s a run through for my staff and myself to see how we can make things run smoother for our grand opening,” she said.

A grand opening is scheduled for Oct. 1.

“We have a full bakery menu,” she said. “We have cakes, brownies, cookies and sweet breads.”

Portions of the proceeds from the coffee will go toward a nonprofit that provides aid to victims of sex trafficking.

Any new business in Victoria is a positive for the city, said Jeff Lyon, president of the Victoria Chamber of Commerce.

“It shows a lot of confidence in the future of Victoria as we grow and progress,” he said. “It’s great to have a local business open like that.”