Retiring District Clerk Ruby Garcia looks through some documents left on her desk next to where the presiding judge sits in the Refugio County Courthouse on Wednesday.

REFUGIO — Ruby Garcia straightened her nameplate in front of her seat by the judge’s dais in the Refugio County Courthouse Wednesday for one of the last times.

“This was my spot. Right here,” the retiring district clerk said, lying back into her seat looking out into the courtroom. She reminisced about her tenure as a clerk since her first election in 1990 and recounted the countless hours of court proceedings she sat through. “It is surreal.”

Friday will mark the conclusion of Garcia’s nearly four decades of service as a clerk for the county, wherein she filed documents for high-profile criminal cases and minor misdemeanors. She also assisted judges, district attorneys and lawyers of all stripes while managing a small budget fit for a rural county.

Although she worked in the office for years before, Garcia decided to run for office after the previous district clerk and her mentor, Mary Lou English, did not seek reelection in 1990. English, Garcia said, empowered her to run.

“I never would have thought I could do it, but she encouraged me,” Garcia said. “I would not be here without her.” 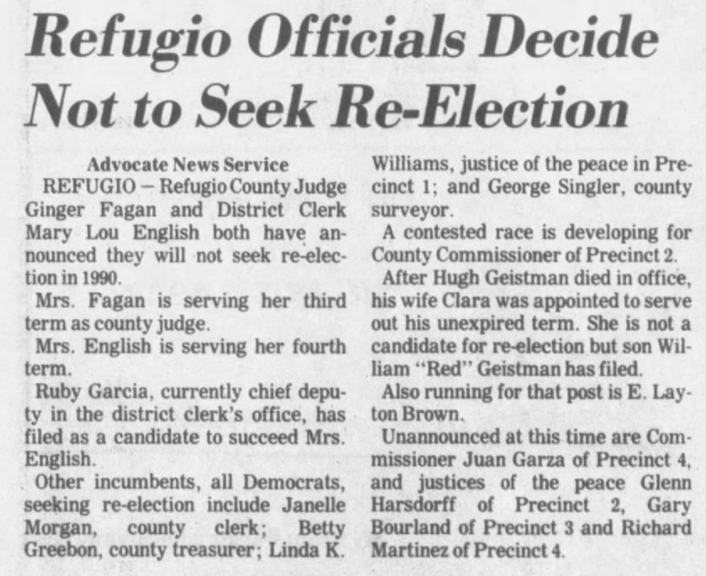 As the years passed, she pushed to innovate the office, beginning the long process of digitizing old documents stored in the second-floor office. Although she did not finish, she is handing it off to her predecessor with a significant portion completed.

“We tried to fight it, but we were not successful,” Garcia said. “It was quite a lot to add to my plate, but I was up for it. I took it as an opportunity to learn about misdemeanor cases and stuff that a county clerk is more familiar with.” 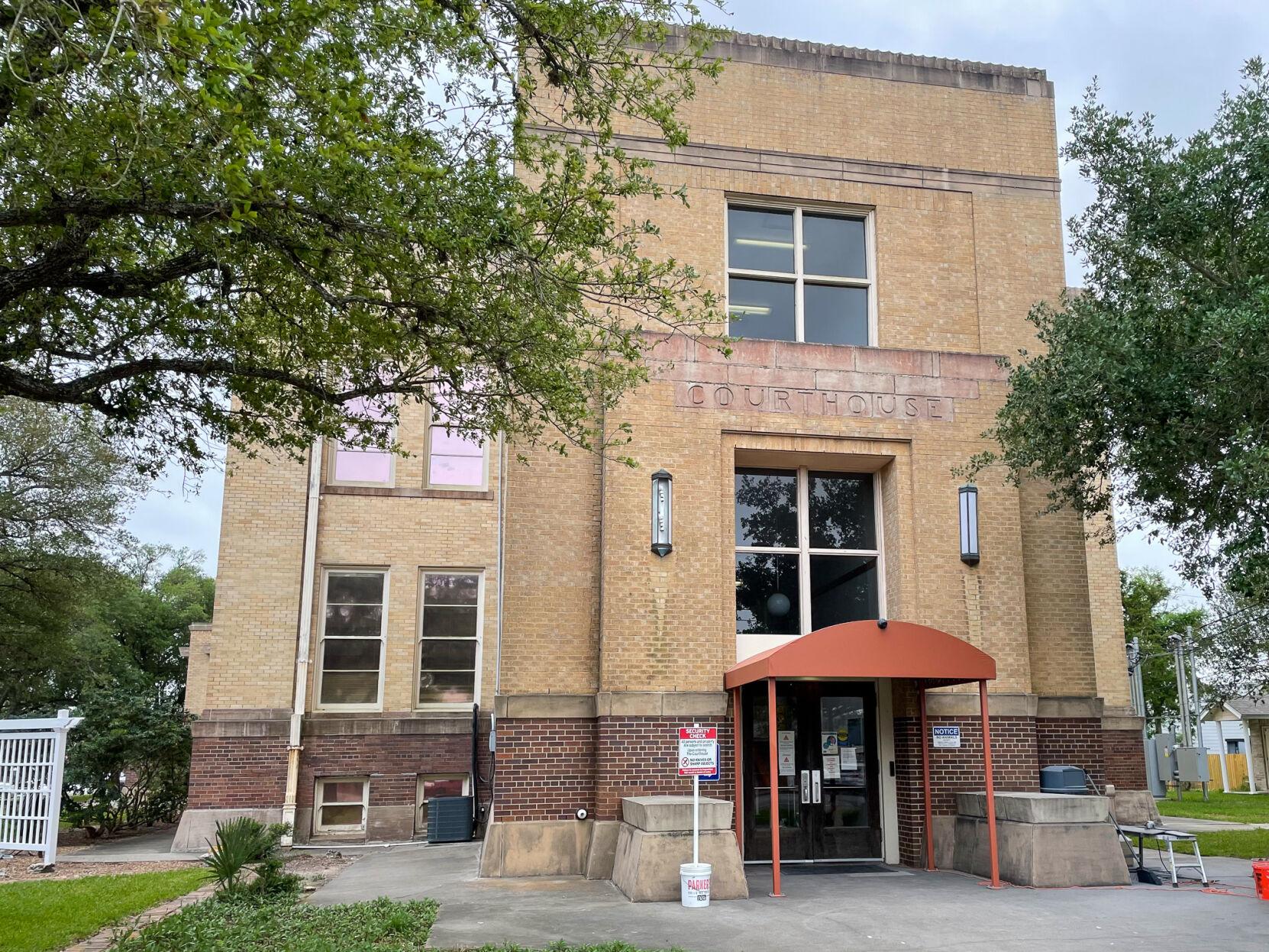 The Refugio County Courthouse is located at 808 Commerce St. in Refugio.

More recently, she pushed for the county to transition to Odyssey, a new court records management system, which, she said, is the “Cadillac” of records management. She said implementing the system was an undertaking, but she expects it will yield dividends for the office going forward.

“Our smaller budget makes it harder to get these things, but it was worth fighting for,” she said. “It will help them better serve the community for years to come.”

Garcia’s chief deputy of more than 30 years, Sylvia Lopez, will take the reins of the office after Friday. The retiring clerk said the county will be well taken care of with Lopez, who is also a close friend.

“She knows what she is doing,” Garcia said. “It makes me feel better about leaving. The county will be in good hands.”

Portrait of Caleb Kwi in the backyard of his family’s home in Port Lavaca.

Caleb Kwi sits with his grandfather, Luke Kwi, inside their family home in Port Lavaca.

Caleb Kwi holds his certificate of appointment to the U.S. Military Academy at West Point at his home in Port Lavaca.

Caleb Kwi plays the piano inside his family's home in Port Lavaca.

Caleb Kwi plays the guitar in the backyard of his family's home in Port Lavaca.

On the way back from a recent band competition, the clarinetist, who also plays guitar and piano at his family’s church, finally received news that he had been admitted.

“I jumped up — my head almost hit the top of the bus,” Kwi said. “I thanked my mom, and right when I came home, I gave her a big hug.”

Kwi had not even considered joining the military until a conversation with his father Solomon Kwi shortly after in-person school was suspended last spring because of the pandemic. He was particularly inspired by the story of David Eubank, a Texas A&M graduate and former U.S. Army Special Forces officer who founded the Free Burma Rangers, a humanitarian organization that has worked to organize and protect oppressed ethnic minorities in several war zones, including the Karen people of Myanmar, a Southeast Asian country also known as Burma.

Caleb Kwi’s family is among the hundreds of people of Karen descent living in Port Lavaca today. The Karen primarily live on the southeast edge of Myanmar, but decades of persecution by the country’s Burmese majority have driven hundreds of thousands of them into refugee camps in Thailand. Some Karen people, like Kwi’s parents, managed to immigrate to the United States, where his mother became a doctor and his father became a chemical engineer.

Long before his parents immigrated, Caleb Kwi’s grandfather Luke Kwi was held captive in a Japanese labor camp during World War II that was liberated by American soldiers. Prisoners there were tortured, and Caleb Kwi’s grandfather told him the story of one who was decapitated for grabbing slightly more rice than the prisoners were allowed.

Hearing these stories instilled in Kwi a set of beliefs that made the military seem like a good fit for him.

“The values they hold — the values of duty, honor and country — I think I have that nailed down because of my background,” he said.

Lt. Col. David Yatto, a West Point graduate and 26-year Army veteran who serves as a recruitment coordinator in the Houston area, said Kwi showed initiative during the demanding admissions process for West Point, whose graduates comprise about half of the Army’s high-ranking officers. Kwi’s mother had to enlist all of the doctors at Port Lavaca Clinic Associates, where she works, to write letters to the Department of Defense’s medical review board vouching for her son’s physical fitness.

“This process is lengthy,” Yatto said. “It’s a marathon.”

Jarius Stewart, Kwi’s longtime friend and teammate on the Sandcrabs’ varsity basketball team, said his work ethic and confidence stood out. After Kwi quit playing football to focus on basketball, Stewart said he worked hard to condition himself and improve his shooting, contributing to their 9-7 senior season, which ended in a bidistrict playoff loss.

“He’s never been a bad player, but he wasn’t one of those guys at first,” Stewart said. “I really believe he’s the best shooter in that district.”

As Kwi went through the application process for West Point, Stewart reached out to him for help applying to the Air Force Academy, where he has signed a letter of intent. Once they graduate, the former teammates will be required to serve at least five years of active duty in the military.

Kwi’s military journey begins in late June, when he will attend a six-week basic training program called BEAST. Solomon Kwi said he hopes the rigor of West Point, along with the family’s faith, will shape his son’s life.

“He needed discipline in his life,” he said. “The military can change him. But the heart, I told him, only God can change the heart.”

Caleb Kwi said his parents have inspired him to strive for something greater.

“I do have some discipline, but compared to their discipline, it’s nothing,” he said. “They have high expectations of me.”

What is West Point?

The United States Military Academy at West Point is an elite four-year military academy located in upstate New York that enrolls more than 4,000 cadets and trains many of the Army's high-ranking generals. Graduates are required to commit to at least five years of active duty and three years of reserve duty.

Education
Graduates
Be proud of your graduates accomplishments, show them off
Emree Weaver / Emree Weaver | eweaver@vicad.com

Sharon Swize, right, takes a photo of Goliad seniors Isabel Torres, left, and Courtney Camacho after they received their class of 2020 signs on April 21. A group of parents, teachers and coaches paraded to the homes of 102 Goliad High School seniors to congratulate them and show support amid the pandemic.

The Victoria Advocate will honor graduating seniors in the Crossroads with a special page on May 30.

If you want to honor your senior submit their photo — a color head and shoulders photo of them — with their name, age, school they are graduating from and the city it is located, parents’ names, the senior’s future plans, such as college they plan to attend and profession they plan to follow to deliverydesk@vicad.com.

Be sure to include your phone number so we can contact you in case we have a question.

Contributed photo by Museum of the Coastal Bend

Evidence of the stockade walls, found during the 2001 archaeological excavation of Presidio La Bahia and Fort St. Louis at Garcitas Creek.

It was about this time 300 years ago that the Spanish founded the Presidio La Bahia.

La Bahia can refer to the presidio, mission and what is now considered Lavaca and Matagorda bays. The official name designated by the Spanish for the presidio, or fort, was Nuestra Señora Santa Maria de Loreto de la Bahia del Espiritu Santo. In April 1721, it was founded on the ruins of French Fort St. Louis that predated it.

In the presidio’s present Goliad County location, that history can be experienced with upcoming events or an increasingly popular overnight stay.

A few documents suggest the presidio’s founding might have been in either April or May 1721, said Scott McMahon, director at the Presidio La Bahia. Following the establishment of the presidio in its first location along Garcitas Creek, near present day Vanderbilt, the presidio and mission moved locations at least twice — to present day Mission Valley and then to Goliad, where it is today at 217 U.S. 183.

At the presidio’s current location, the option to stay overnight at the fort has grown in popularity, McMahon said.

The Quarters at Presidio La Bahia include a small apartment space inside the presidio’s walls, which the Spanish built in 1747.

Even during most of the pandemic, he said The Quarters have been a popular spot with less traffic.

“You’re closer to the history here because it’s not a major metro like in San Antonio,” he said.

For centuries, the Presidio in Goliad has stood as an iconic landmark of South Texas’ Spanish colonial history.

Guests at The Quarters also receive access to the presidio after normal opening hours, allowing them to experience one of the oldest historical sites in Texas at night.

Before the site existed or the arrival of the Spanish, other colonizers had occupied the region.

Near Garcitas Creek, the French established Fort St. Louis in 1685. While the French settlement and its people did not survive, the Spanish did.

About 36 years later, the Spanish founded La Bahia on the same grounds. At the time of the presidio’s founding, Spanish settlements also existed in present day Nacogdoches and San Antonio.

Unlike other colonial settlements, all of these communities would grow into cities that still exist today.

When Sue Prudhomme was in school, school kids were taught that Europeans came to North America from the east and then moved westward. With the discovery of Fort St. Louis, she said it made historians reevaluate how they teach migration patterns in Texas.

As the executive director of cultural affairs at the Museum of the Coastal Bend, she oversees the display of many of the artifacts from both the French and Spanish occupations near Garcitas Creek.

“This changed how kids learn about history,” she said. “And these people didn’t move. The borders did.”

Stay tuned with the Advocate for your local paper's 175th anniversary history series, which will publish May 9.

In this special section, the Advocate will bring you local history about the people and places that have made Victoria and the newspaper what they are today. Some of the history may be familiar and some might be news even to Victoria natives.