“Few rights of the public are as important as the right to knowledge about how their government spends taxpayer funds and manages the public’s business. This suit is to vindicate those rights and reaffirm ... that sunshine is indeed the best disinfectant,” according to the lawsuit filed by the newspaper’s attorney, John Griffin, of Victoria.

The suit comes almost two weeks after a May 9 public meeting in which the port authority’s executive director, Charles Hausmann, and board members discussed Farenthold’s hiring.

Also Monday, port authority officials issued a special meeting notice for Thursday to deliberate in closed session the employment of the former congressman. Unlike the May 9 notice, this one names Farenthold.

Neither Hausmann nor the port authority’s attorney responded to requests for interviews Monday.

A published notice of the initial May 9 meeting included description of a discussion “for the purposes of deliberating the appointment, employment, compensation, evaluation, reassignment, duties, discipline or dismissal of a public officer or employee.” It did not mention Farenthold’s name, proposed position or $160,000 salary.

The Texas Open Meetings Act requires specific notice to the public of such a discussion, Griffin said. Filed in Calhoun County district court, the suit seeks to void the port authority’s hiring of Farenthold on the grounds the board acted illegally. District Judge Stephen Williams is set to handle the case, a Calhoun County District Clerk official said.

The port authority at least should have named Farenthold in its notice, given the former congressman’s previous post, large new salary and specialty of his position, Griffin said. And Farenthold’s refusal to repay $84,000 of taxpayer money used to settle a sexual harassment lawsuit and ensuing resignation make his hiring of even greater interest. The lawsuit filed Monday includes the settlement and Farenthold’s broken promise to repay the money in its statement of relevant facts.

“The more significant the issue or person, the more detail that’s required in the notice, and this notice was a boilerplate, generic notice, not unlike notices for any other meeting,” Griffin said. “It didn’t alert the public in any way.”

Although Farenthold began work in his new position of legislative liaison May 14, a district judge could issue a judgment voiding his hiring. The Advocate has requested no monetary award other than court and attorney fees.

After the Advocate reported last week on the possible open meetings violation, attorneys for the authority announced Friday they had requested an opinion from the Texas Attorney General’s Office.

However, such an opinion would have no effect on a judge deciding the case, Griffin said.

“It was an attempt to change the subject,” he said of the action by the port’s attorneys.

In a 1986 case between the Austin-American Statesman and the Austin school board, Texas Supreme Court justices ruled that board members could not simply provide a generic description before discussing the hiring of a superintendent.

“Selection of a new school superintendent is not in the same category as ordinary personnel matters, and a label like ‘personnel’ fails as a description of that subject,” according to that ruling.

Griffin said he seriously doubted the attorney general’s office would contradict the state Supreme Court rulings and prior opinions, which he said support the newspaper’s claims.

Chris Cobler, Advocate editor-in-chief and president of the Freedom of Information Foundation of Texas, said the newspaper pursued legal action purely to preserve the public’s right to know.

“This isn’t about whether the port should or shouldn’t have hired Farenthold,” Cobler said. “This is about reminding our elected officials that they work for the public.” 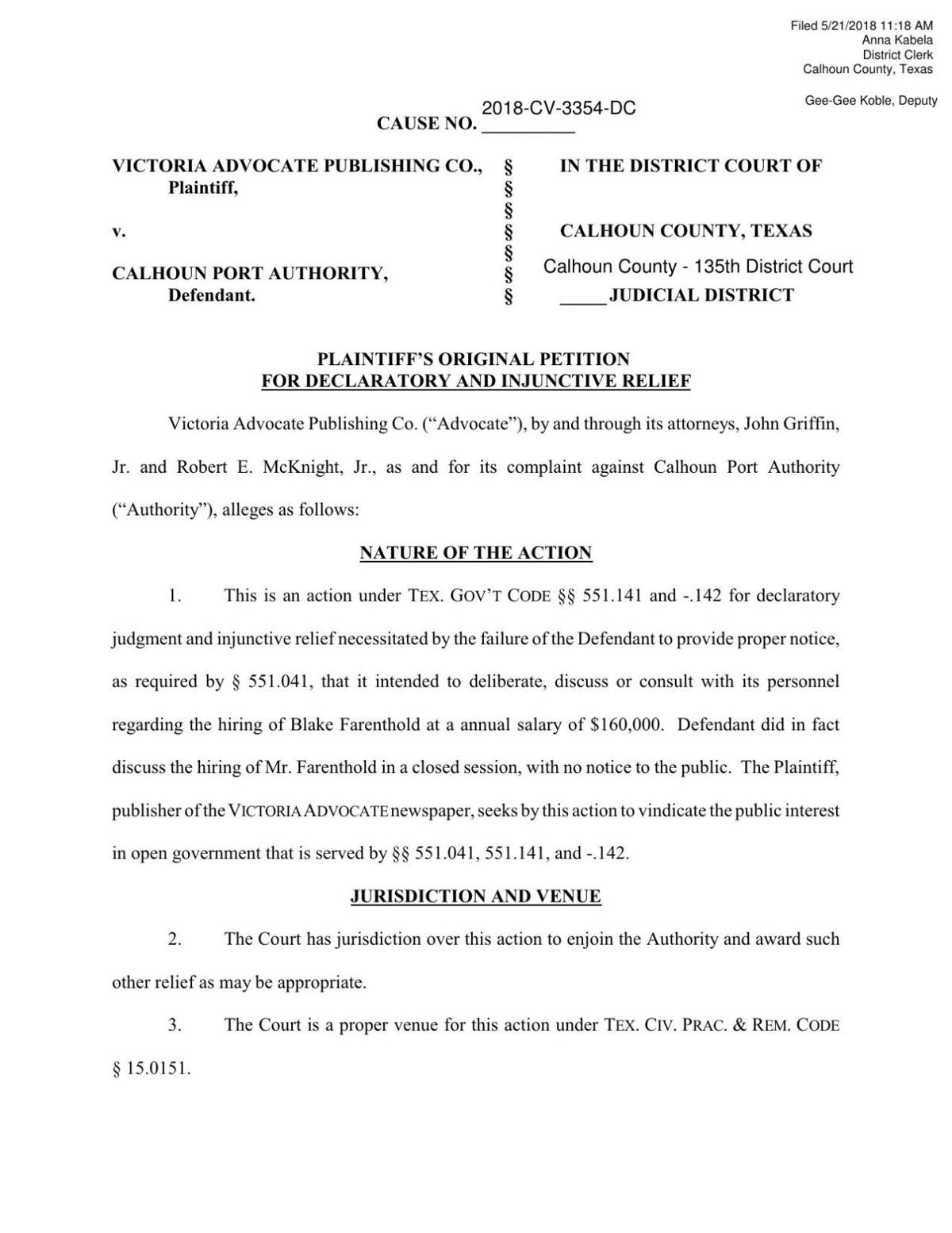 More in Port Politics: A fight for open government (19 of 24)

WHAT: Special meeting by the Calhoun Port Authority

ON THE AGENDA: Discussion of legislative liaison Blake Farenthold

Calhoun Port Authority representatives will have until May 28 to respond to a lawsuit filed by the Victoria Advocate. Port authority representatives have requested that the Texas Attorney General's Office weigh in on whether the port authority followed the law in announcing they planned to discuss the hiring of former Congressman Blake Farenthold.

Port authority officials did not include Farenthold's name, position or salary before the April 9 meeting in which they discussed his hiring.

Looking to a 1986 Texas Supreme Court decision, the Advocate's attorney argues the port authority should have named Farenthold in its notice of discussion. An attorney general's opinion, whatever it may be, will not affect any decision made by a judge in the lawsuit.