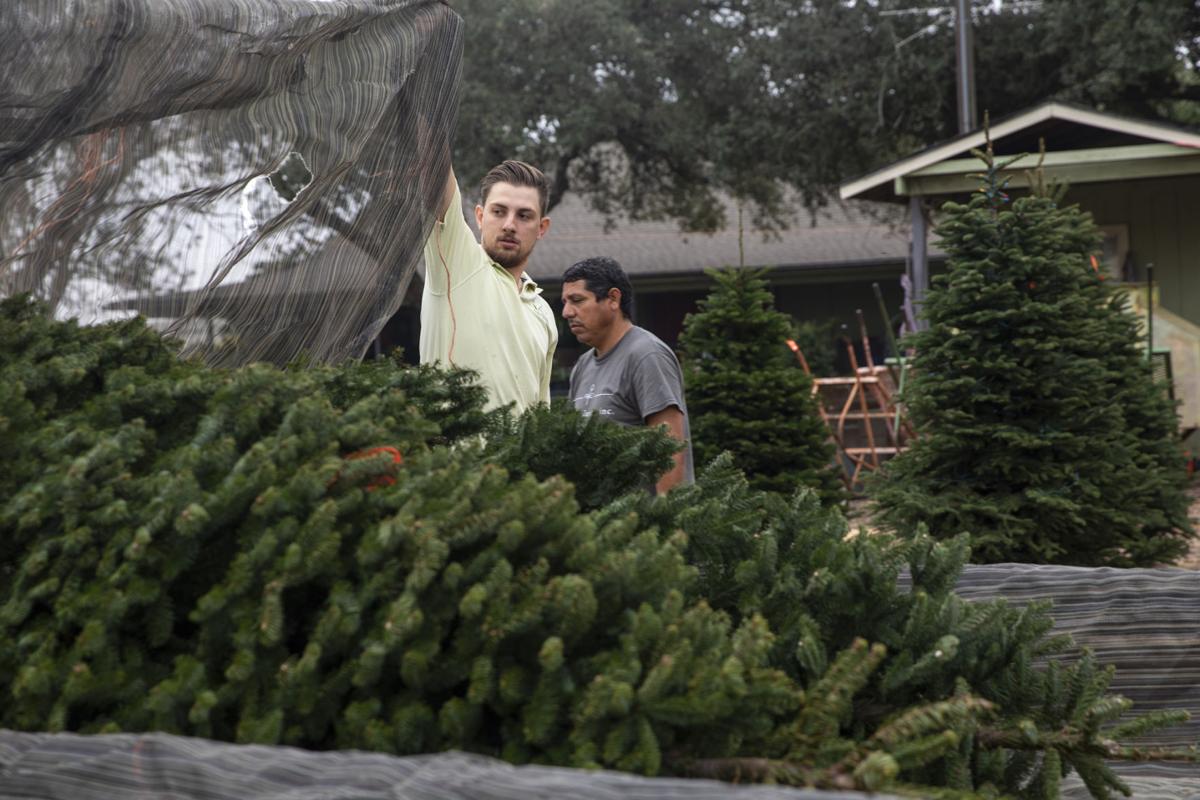 Sam Poland covers Christmas trees at Renken’s Nursery before delivering them to homes in Victoria. 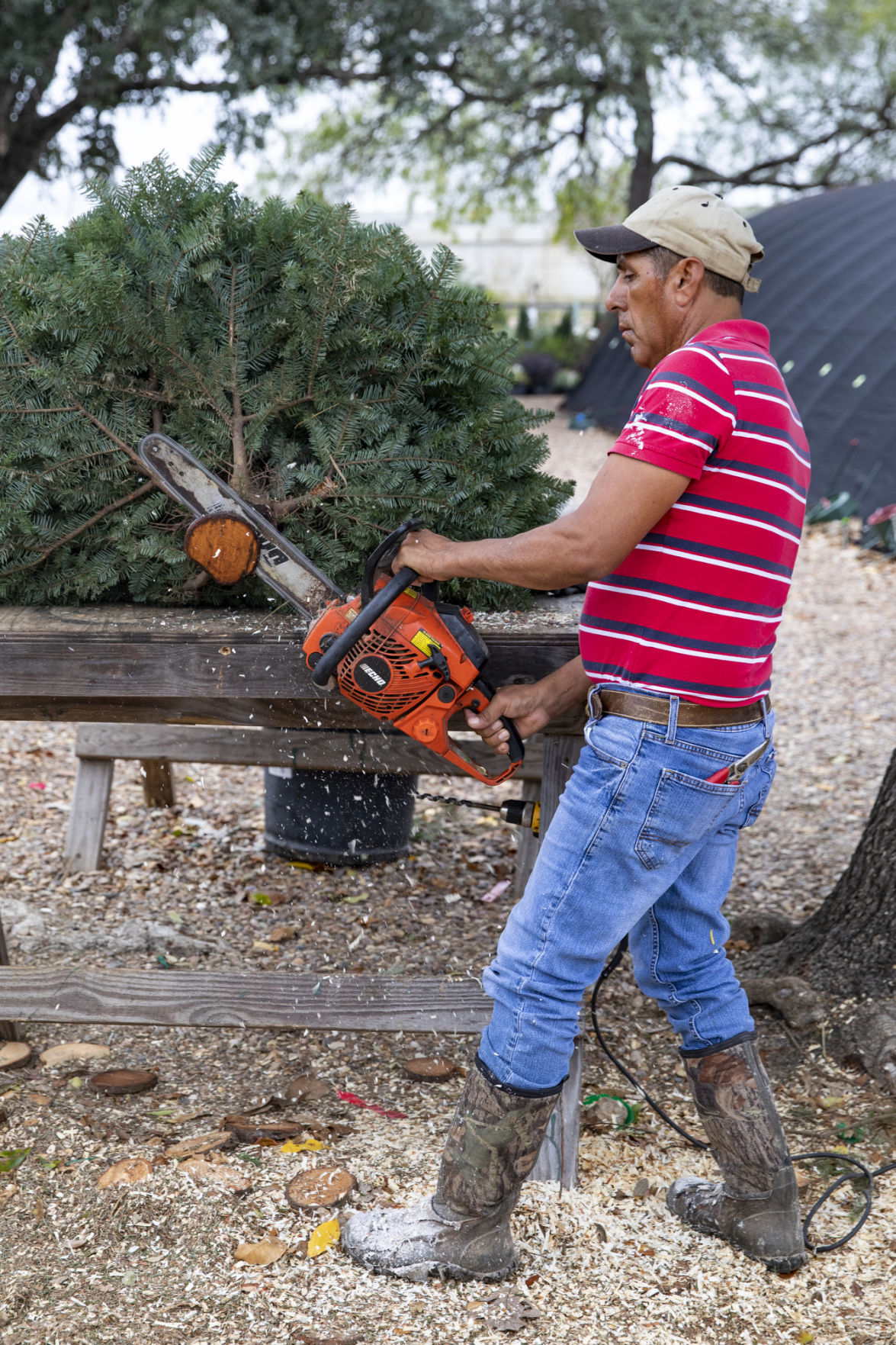 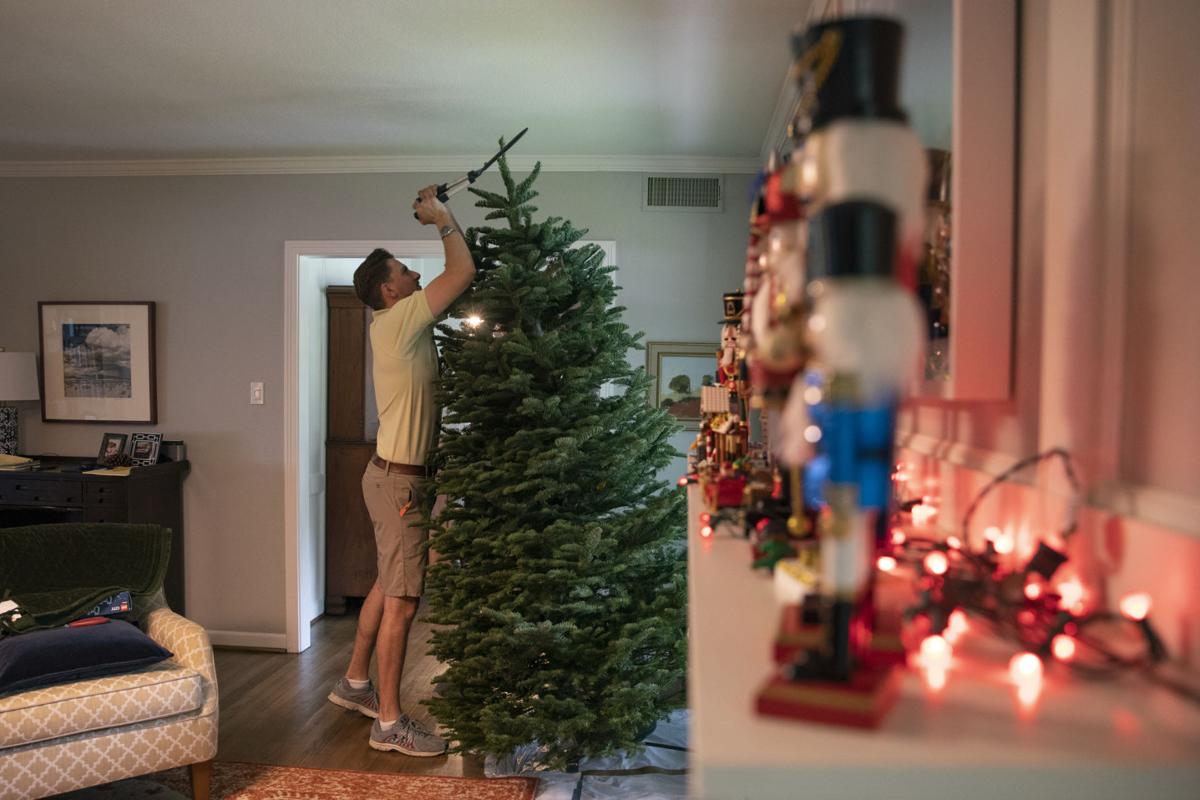 Sam Poland trims a Christmas tree from Renken’s Nursery after delivering it to Ben Jones. 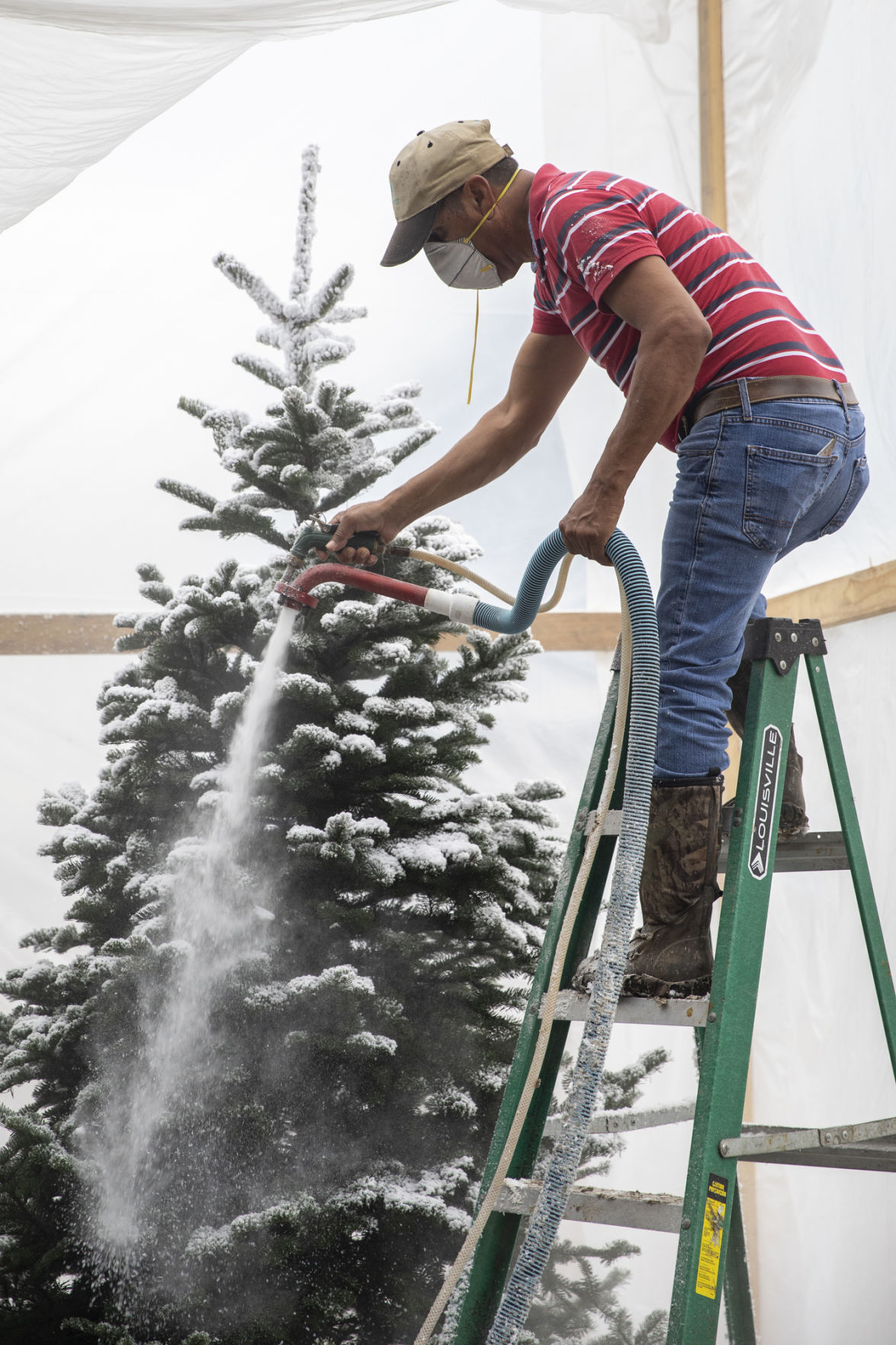 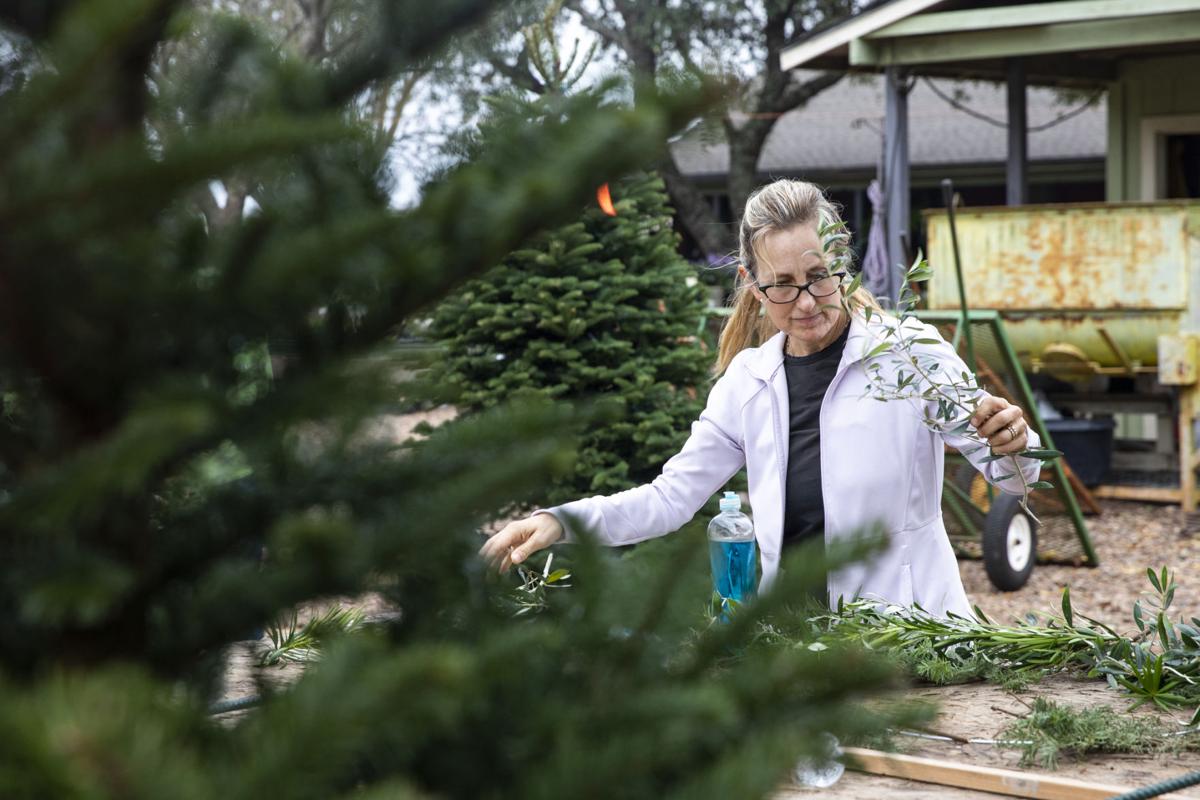 Sam Poland covers Christmas trees at Renken’s Nursery before delivering them to homes in Victoria.

Sam Poland trims a Christmas tree from Renken’s Nursery after delivering it to Ben Jones.

Every year after Thanksgiving, Brooke and Cody Williams pack their young sons, Ethan and Aaron, into the family car and drive to the blue-and-white-striped tent in the Lack’s Furniture parking lot to pick up their Christmas tree.

This year will be their third shopping at Holiday Hills Christmas Trees, which they like for its organized rows of stately fir trees.

“It was kind of a tradition in both of our families to go pick out trees together, so we wanted to start the tradition for our kids,” Brooke Williams said. “Just whatever the kids like that year, we let the kids pick them out.”

Family traditions like the Williamses’ are fueling a nationwide demand for live Christmas trees.

Last year saw a 20% increase in real tree purchases, according to a study by the National Christmas Tree Association. Comparatively, there was only a 12% rise in artificial tree purchases.

Some analysts believe social media might have something to do with it as people try to get the perfect holiday photo.

Whatever the cause, Christmas tree vendors say trees are flying off the lots faster than Santa’s sleigh.

Lanna Jones, who manages the Holiday Hills tent on North Navarro Street with her husband, Terry, said the business has been slammed since it opened Nov. 25.

Elaine Smith, who owns Holiday Hills Christmas Trees, said live Christmas tree vendors are still feeling the effects of 2008 the recession. Because Christmas trees take anywhere from five to 15 years before they’re ready for harvest, the taller trees are in short supply.

“There’s been such a shortage of trees in the last three years, including this year, and probably for one or two more years,” said Smith, of Williamette Valley, Ore.

Following the recession, many Christmas tree farmers left the industry, Smith said. New planting began around 2012, but Christmas trees only grow about one foot per year.

“Until that catches up with the size that everybody wants to buy, there will be a shortage,” Smith said.

The popular fir variety that Smith sells at 12 Holiday Hills locations throughout south and central Texas only grows in colder climates. Smith buys her trees from farmers in Oregon.

However, Christmas tree farmers are able to make a living in Texas by growing other varieties.

Abrameit, who grew up on a Goliad farm and managed an AgriLife experimentation farm for years, said Crossroads farmland could be ripe territory for a new generation of Christmas tree farmers. He said Virginia pines grow well in sandy and acidic soil.

“There’s not a Christmas tree farm anywhere in the Crossroads area, so there’s certainly a market for one,” Abrameit said.

Christmas trees could be especially good for farmers who don’t always have time to tend their fields, Abrameit added.

Where the Christmas tree farm now stands, Abrameit said, he first tried growing peaches. After work required him to travel, he began looking for a crop he could maintain in what he called “a long-distance relationship.”

Additionally, because trees grow slowly and sell at heights anywhere between 4 and 15 feet, “it’s not like you have to sell them every year,” Abrameit said.

Certainly, with an increased demand for Christmas trees, Abrameit said Christmas tree farming is uncharted territory in the Crossroads but is potentially lucrative.

Where to buy live trees

Here are some stores that sell live Christmas trees.