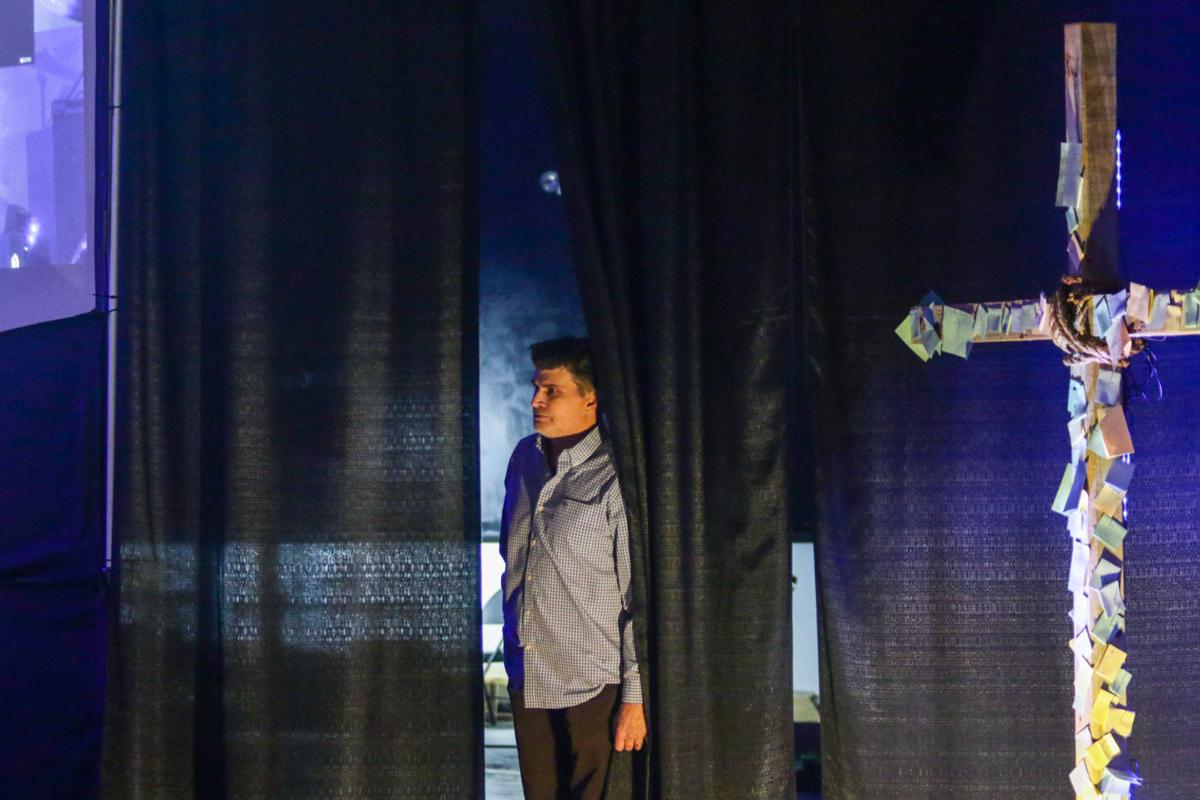 Skip Mozisek, worship pastor at Fellowship of the Crossroads, watches over the congregation from backstage during a Sunday church service. Mozisek stands during most Sundays to provide an extra set of eyes on the church entrances as an added security measure. 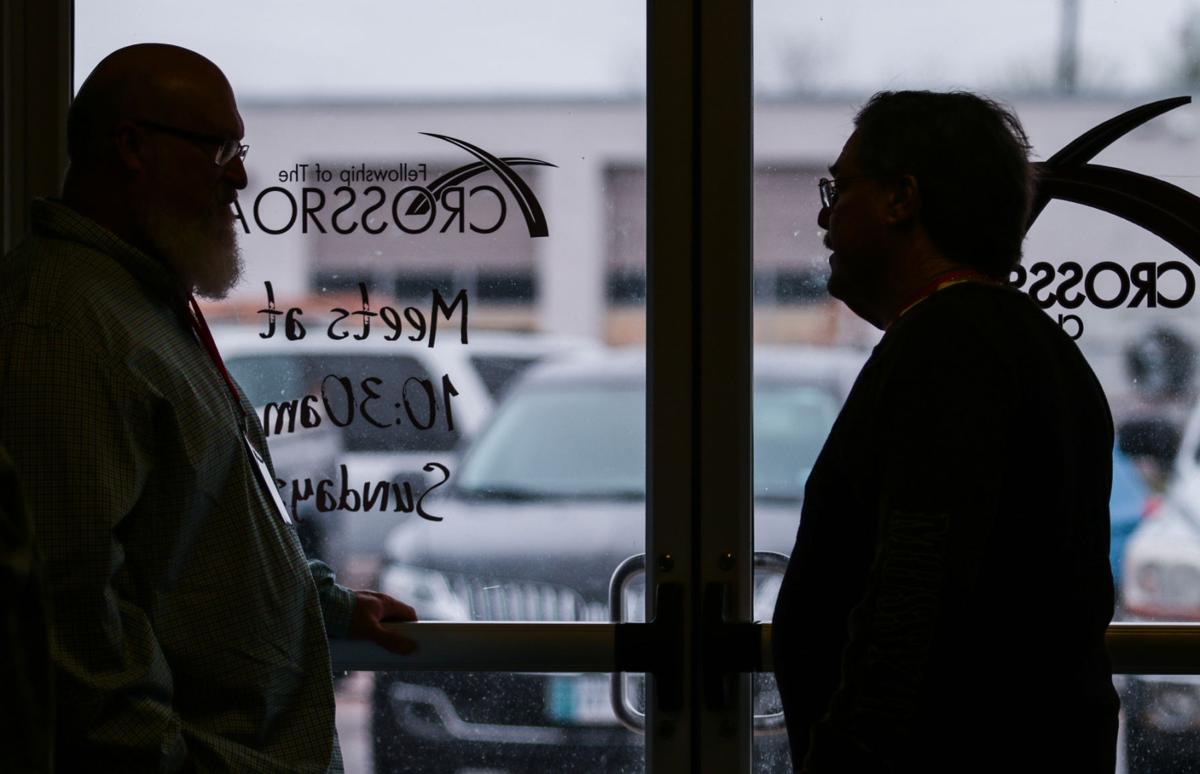 Fellowship of the Crossroads church volunteers Mark Tisdale, 56, and Michael Smith, 60, stand at the church entrance to welcome guests into the building Sunday morning. The church has a single entrance, visible to a security guard, to maintain the safety of its members. 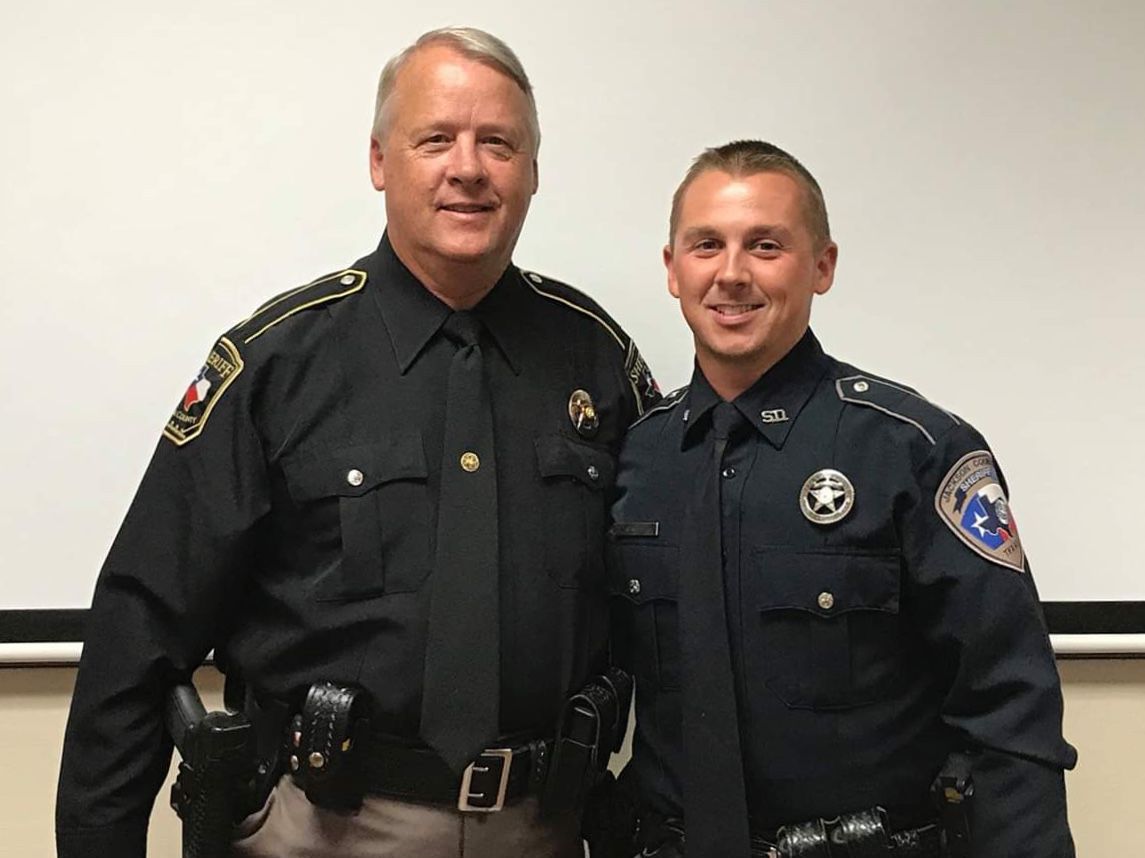 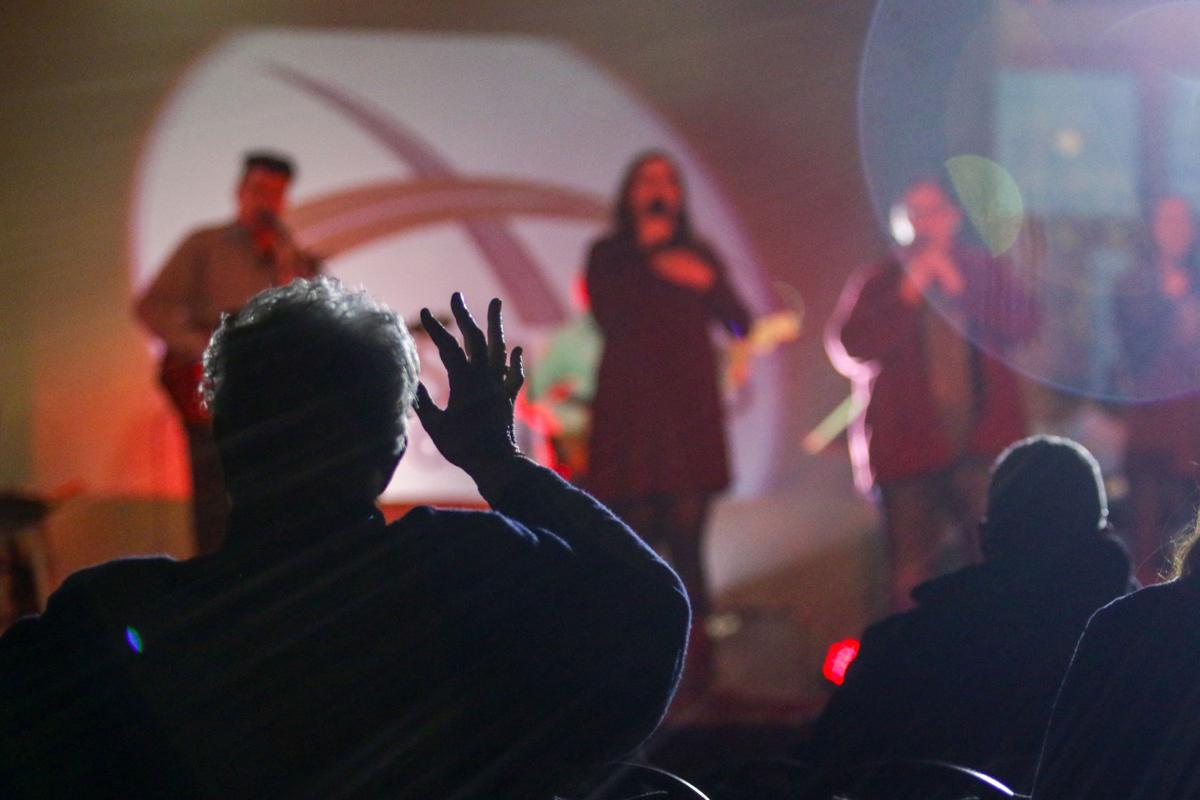 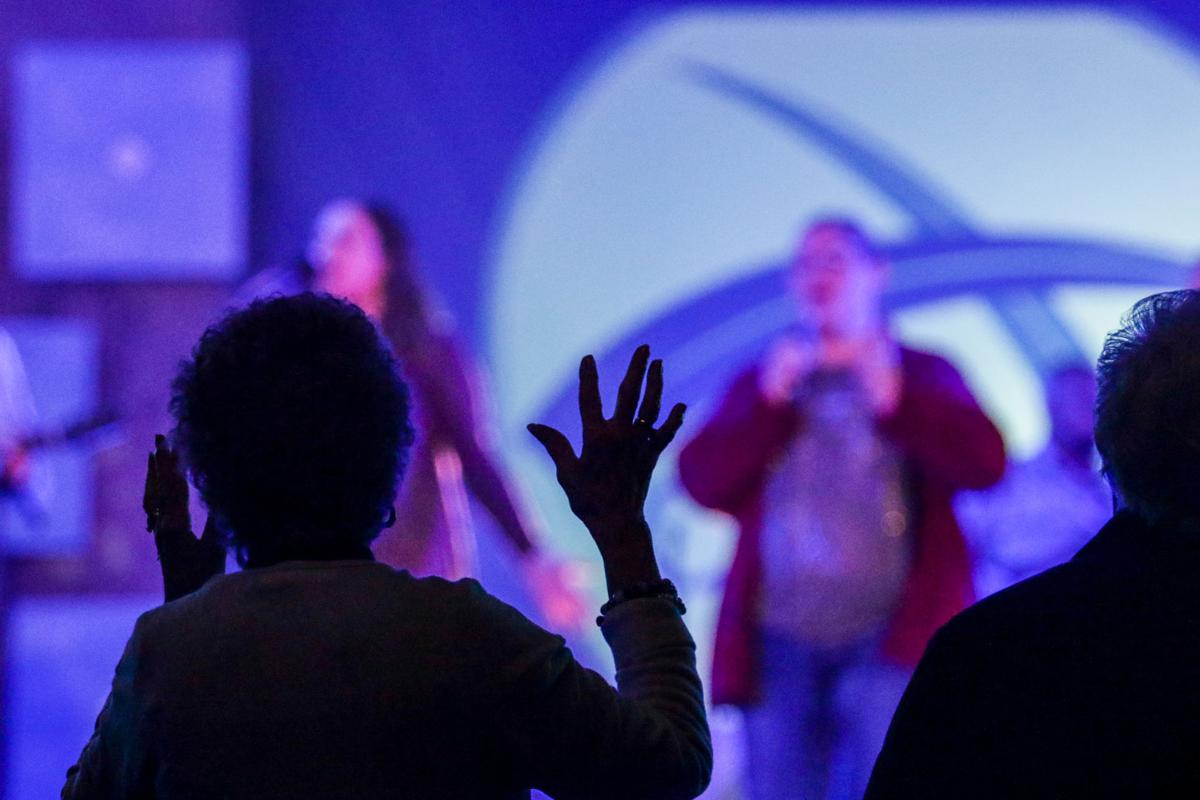 Skip Mozisek, worship pastor at Fellowship of the Crossroads, watches over the congregation from backstage during a Sunday church service. Mozisek stands during most Sundays to provide an extra set of eyes on the church entrances as an added security measure.

Fellowship of the Crossroads church volunteers Mark Tisdale, 56, and Michael Smith, 60, stand at the church entrance to welcome guests into the building Sunday morning. The church has a single entrance, visible to a security guard, to maintain the safety of its members.

Every Sunday, families walk into the Fellowship of the Crossroads Church in their best attire, ready to come together and praise God.

At the entrance to the auditorium, a uniformed police officer stands in a conspicuous spot. As congregation members seat themselves in the pews and raise their hands in worship, a pastor peers out from behind a black curtain and scans the sanctuary for potential threats.

The officer and pastor on alert are part of a comprehensive security plan that reflects just how much the quaint churches of South Texas have changed in response to increasing violence.

In 2017, U.S. faith-based organizations experienced a record of 261 deadly force incidents, according to Carl Chinn, a church security consultant and author who has been tracking violence in all places of worship since 1999, when the country saw just 10 incidents.

“This is the society we live in today, and our job as pastors is to keep our flock safe and secure,” said Bard Letsinger, the lead pastor and founder of Fellowship of the Crossroads in Victoria. “The only people we find have a problem with it are people with bad intentions.”

Letsinger hired a police officer for services in 2013 as part of his long-standing focus on security. But for many churches in the Crossroads, it took the 2017 massacre at the First Baptist Church in Sutherland Springs to start doing away with the “it could never happen here” mindset.

Licensed handgun owners can legally carry loaded weapons in churches unless the church has proper signage stating otherwise, Attorney General Ken Paxton stated in a legal opinion released about a month after Sutherland Springs. Some pastors and reverends request that congregation members notify them if they wish to carry during services as a way of keeping track of the guns.

The First United Methodist Church in Edna was among the churches that acted. The church assembled a new security team and asked congregation members Jeremy and Lance Crull of Jackson and Victoria counties sheriff’s offices to conduct an active shooter class.

The father-son duo, who have led active shooter training at schools in multiple Crossroads districts, taught their church leaders what they could with their school active shooter training curriculum. But training is like a language that fades the longer you go without practicing, said Lance Crull, a school resource officer at Victoria West High School.

Determined to find training tailored to churches, Crull reached out to a company called Strategos International to request a training session for the community. The Missouri-based company, which began by training only law enforcement, will have a 1-day active shooter and intruder awareness session at the Lavaca Navidad River Authority headquarters in late March.

Vaughn Baker, a co-founder of Strategos International with 20-plus years in law enforcement, said the comprehensive session is designed to educate anyone from parking attendants to pastors. While portions of the session are biblically based, he said people from all denominations are welcome to attend.

“What we are trying to accomplish is increased safety in places of worship without compromising the atmosphere of comfort, refuge, worship and learning,” Baker said.

In his younger years, Lance Crull said he recalls a church being the place he went to feel safe.

“The doors were always open; you could go into any church at any time,” he said. “The mentality hasn’t really changed, (but) the culture has changed.”

From 1999 to 2017, Chinn’s research shows a steep increase in these incidents, which he theorizes is partially because of new technology that makes incidents easier to track but mainly because of a general increase in violence.

“The general increase of violence is affecting churches, but I also believe there has been a shift in American respect, if you will, for faith-based organizations and faith-based property,” Chinn said. “It is concerning to me, that is no surprise, but I hope the documentation of these things helps others come to a wake-up call.”

And yet, it is important to remember that faith-based institutions are not necessarily any more likely to be targets of violence than other places where people regularly assemble, such as schools, concerts, malls and theaters, said Dallas Drake, the director of The Center for Homicide Research in Minneapolis.

“There are so many churches across the United States, but the number of shootings directly impacting churches is a very small number,” he said. “I still think it is safe to go to church on Sunday.

“But when I go to the grocery store or when I go to the barber shop or wherever I go throughout my day, I’m very concerned about mass shootings because we’re seeing them happen all across the United States.”

Drake and a team of scholars compiled a national database, specifically tracking church shootings between 1980 and 2005. He is currently working with his team to update the data through 2016, in which he said they are “seeing a huge surge; the number’s quadrupling.”

The most challenging and crucial part of church security is making sure the measures amplify the church’s mission rather than compromise it, Baker said.

“You’ll know you’re doing church security right if your church becomes a more friendly place (rather) than a less friendly place,” Baker said. “It’s not only increasing awareness that people could do harm but also recognizing people that need help and ministry.”

Part of the Christian mission is to heal the broken, which puts churches uniquely at risk for violence, Drake said.

“Churches tend to kind of market themselves to the down-and-out,” he said. “That is what the Gospel teaches us; we reach out to the homeless, people that have substance abuse problems, people who are experiencing family issues and divorce and family violence, and so anytime that you have programs or projects that cater specifically to any of these groups that are marginalized ... you’re going to have greater risk.”

Both Chinn’s and Drake’s research show that offenders, whether they are shooters or responsible for other deadly force incidents, are widely affiliated with the churches they target. Experts say that fact, coupled with churches’ tendency to help vulnerable populations, should give people all the more reason to spend more time getting to know one another at their places of worship.

“The things we’ve always been taught are even more important; things like, ‘Well you should get to know everybody,’” he said. “The more people you know at church, the more you will recognize when someone comes in that perhaps doesn’t belong there … That probably helps with a lot of the other types of incidents as well (because) people don’t feel like outsiders.”

Pastor Fred Hobbs Jr. of Mt. Nebo Baptist Church in Victoria, for example, said his ministry welcomes visitors by shaking their hands and getting to know them and their needs. Hobbs’ church also assembled a security ministry after the Sutherland Springs shooting.

After 33 years in law enforcement and a lifetime in the Methodist church, Lance Crull said he does not know whether there will ever be a happy medium between the mentality of faith-based organizations and the country’s changing culture. But more training, he said, is always a step in the right direction.

“It’s a constant balancing act, (and) our plan is to build off of what we’ve already done for next year and years to come,” he said. “I don’t think you could ever be too prepared for anything that is life or death.”

WHAT:  1-day training session on "Intruder Awareness and Response for Church Personnel" by Strategos International

COST: Tickets are $74.25 to $99 and can be purchased through the Eventbrite registration page.