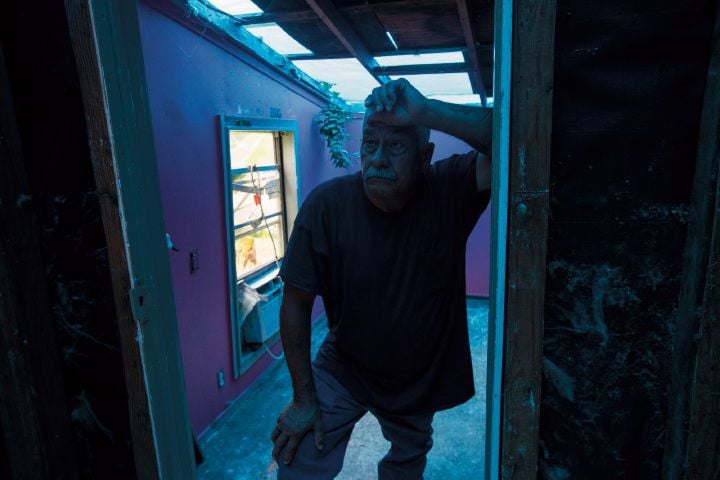 A branch grows under a roof tarp and inside of Joe Michael Ramirez's house. The 57-year-old's family home was severely damaged in Hurricane Harvey. 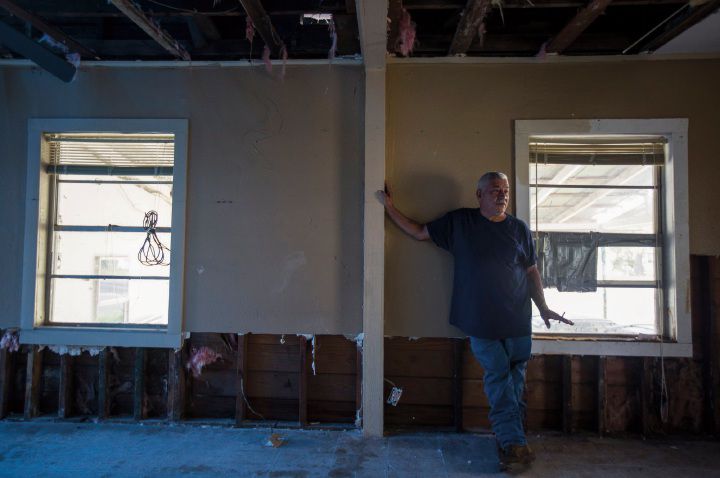 Joe Michael Ramirez, 57, smokes Thursday in his family home. The home was severely damaged in Hurricane Harvey, and his family is displaced. He said before the hurricane, he did not smoke inside the home. 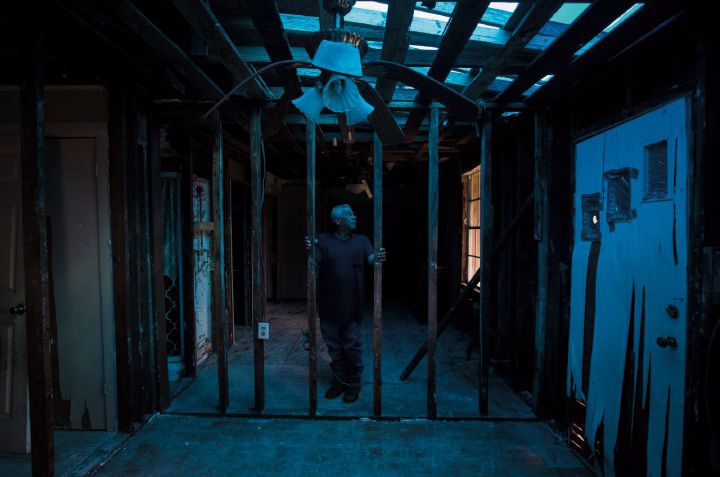 Joe Michael Ramirez, 57, tests the sturdiness of framing in his home that was damaged in Hurricane Harvey. A tarp covers the exposed roof, casting a blue light in the vacated family home Thursday.

A branch grows under a roof tarp and inside of Joe Michael Ramirez's house. The 57-year-old's family home was severely damaged in Hurricane Harvey.

Joe Michael Ramirez, 57, smokes Thursday in his family home. The home was severely damaged in Hurricane Harvey, and his family is displaced. He said before the hurricane, he did not smoke inside the home.

Joe Michael Ramirez, 57, tests the sturdiness of framing in his home that was damaged in Hurricane Harvey. A tarp covers the exposed roof, casting a blue light in the vacated family home Thursday.

Joe Michael Ramirez won't have a place to call his own for at least six months.

Ramirez, 57, of Victoria, lost his three-bedroom house on South Wheeler Street to Hurricane Harvey. A pile of debris sits in his front yard, and a blue tarp rests over his home. The hurricane destroyed everything inside, including the walls and ceiling.

Ramirez lived in his home with his wife, daughter, wife's aunt and seven grandchildren. Now they're staying with family but feel out of place while not in their own space, he said.

Ramirez is one of many in the Crossroads who don't have homes and could use temporary mobile homes from the Federal Emergency Management Agency while rebuilding their lives.

FEMA and the Texas General Land Office have administered only 36 of those mobile homes in Texas for temporary housing while thousands of applicants are waiting for help.

While Ramirez rebuilds his home, he said, a temporary mobile home would help his family and give them a place of their own. He received about $10,000 from FEMA, which he said he'll use to demolish his house. He plans to buy a double-wide mobile home to put in its place.

"I would let my daughter stay in it (with her five children)," he said. "She'd have her own space. I'd give her the opportunity rather than me."

FEMA announced its partnership Sept. 23 with the Texas General Land Office and state Council of Governments.

Joe Brannan, executive director of the Golden Crescent Regional Planning Commission, said FEMA and the Texas GLO are still figuring out the partnership because it's never been done before.

"There are a lot of things that are having to be ironed out - data flow and reimbursement, how the whole thing works," he said.

Many FEMA staff work on reserve for the agency and respond after a disaster, Brannan said, which could be one of the complications.

As well as Harvey, FEMA was bombarded with disaster response to Florida and Puerto Rico hurricanes and California wildfires. which could be another contributing factor for the slow process of providing mobile homes, Brannan said.

The state GLO is about a week away from finalizing a contract with the Texas Council of Governments and FEMA to respond for alternative housing, Brannan said. Once the contract is rolled out, the process should move more quickly.

"The reality of the deal is that it's got to get past lawyers on every level, and there's a finite amount of staff at GLO and FEMA that can deal with this," he said.

Although city officials have said they aren't sure whether temporary FEMA mobile homes are allowed in Victoria, Brittany Eck, Texas GLO spokeswoman, said the county is eligible for them and two are in the process of being installed.

They city hasn't finalized a plan on how to provide housing relief for displaced households because officials don't know how the GLO will be helping Victoria with temporary housing, said Julie Fulgham, development services director. Once city officials know how the GLO will aid the city, they will take a proposal to council, she said.

GLO officials aren't able to begin administering a mobile home for a household until they receive names of those individuals from FEMA, which determines how quickly families receive the homes, said Heather Lagrone, deputy director of the Community Development and Revitalization Program of the Texas General Land Office. Families can stay in the mobile homes for 18 months because the trailers are not a permanent housing solution.

When asked why so few mobile homes have been installed, Pete Phillips, deputy director of the Community and Development and Revitalization of the Texas General Land Office, said the FEMA vetting process for households to receive mobile homes is extensive.

FEMA has to determine what kind of temporary housing the family needs as well as if they've been able to find any other assistance, he said. With installation of mobile homes, GLO also has to abide by many different regulations in every county.

With the partnership between GLO and FEMA, mobile homes are being installed more quickly than in 2016, when FEMA didn't work with GLO to respond to spring floods, Phillips said. The first FEMA mobile home was installed 32 days after Harvey, and the first one after the 2016 floods was administered after more than 60 days.

Phillips said a mobile home shortage shouldn't be an issue because they will install homes FEMA owns as well as homes from contracted vendors.

"I believe the vendor said 4,000 within 120 days could be provided, and that's above and beyond what FEMA has in their inventory," Phillips said. "If FEMA ends up running out, we don't want to stop the program."

More than 300 work orders have been issued for FEMA mobile homes in Texas, said Scott Erickson, deputy logistics section chief assigned to housing with FEMA. When Harvey hit, the agency had a standing inventory of about 1,800 mobile homes in different locations.

"Based on a million applications, we ordered up to 4,500 new units from our manufacturers," Erickson said.

Between 6,000 and 12,000 Harvey-affected households are in need of alternative housing according to FEMA projections, said Lori LaSon, FEMA direct housing task force lead.

John Clegg, owner of Clegg Industries, gave a public testimony Wednesday at a Texas Senate hearing in Victoria. He said he worked in Corpus Christi when Hurricane Carla struck Texas.

"It was faster in Corpus housing people than it is now," he said to Senate members. "Back then, it was HUD, and I think we were placing people in homes about 40 to 50 days after the storm. In the '70s, FEMA had 18,000 homes in storage in Palo Pinto, Texas, and in Lexington, Ky."

Clegg said FEMA sold the 18,000 mobile homes in the 1990s. Since then, he said the agency's business plan has been to build mobile homes when a disaster strikes - an approach he criticized.

"If your house is burning down, you could go to Lowe's and see if you could find a fire extinguisher - or maybe it would be smarter to have it in the house," he said. "It's a very slow process now. It's way slower than it was 47 years ago."

When thousands of trailers and mobile homes sit unused in the heart of a region decimated by Hurricane Harvey, something is terribly wrong wit…