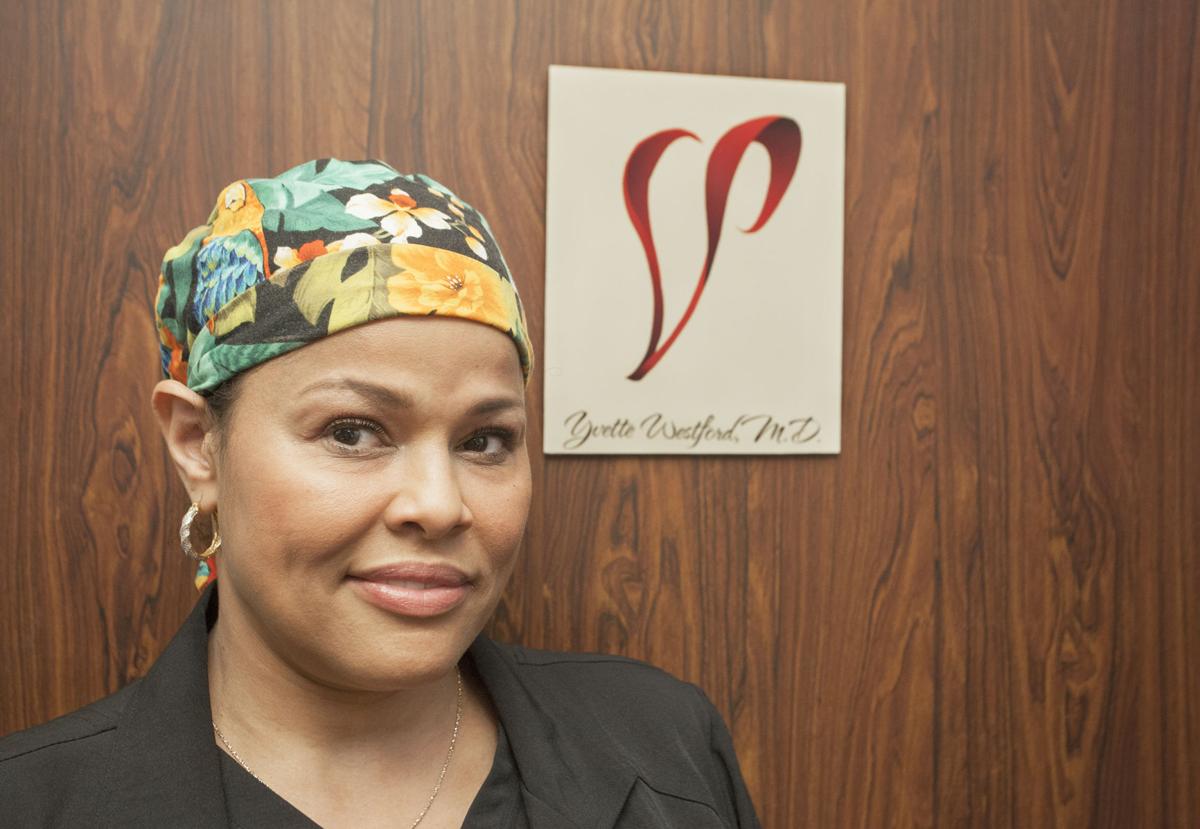 Dr. Yvette Westford, owner of V Spa, poses for a portrait at her clinic spa on Friday, May 8. The OB gyn started solo practice in December to focus on vaginal rejuvenation and the clinic also provide new fat laser and other spa services. 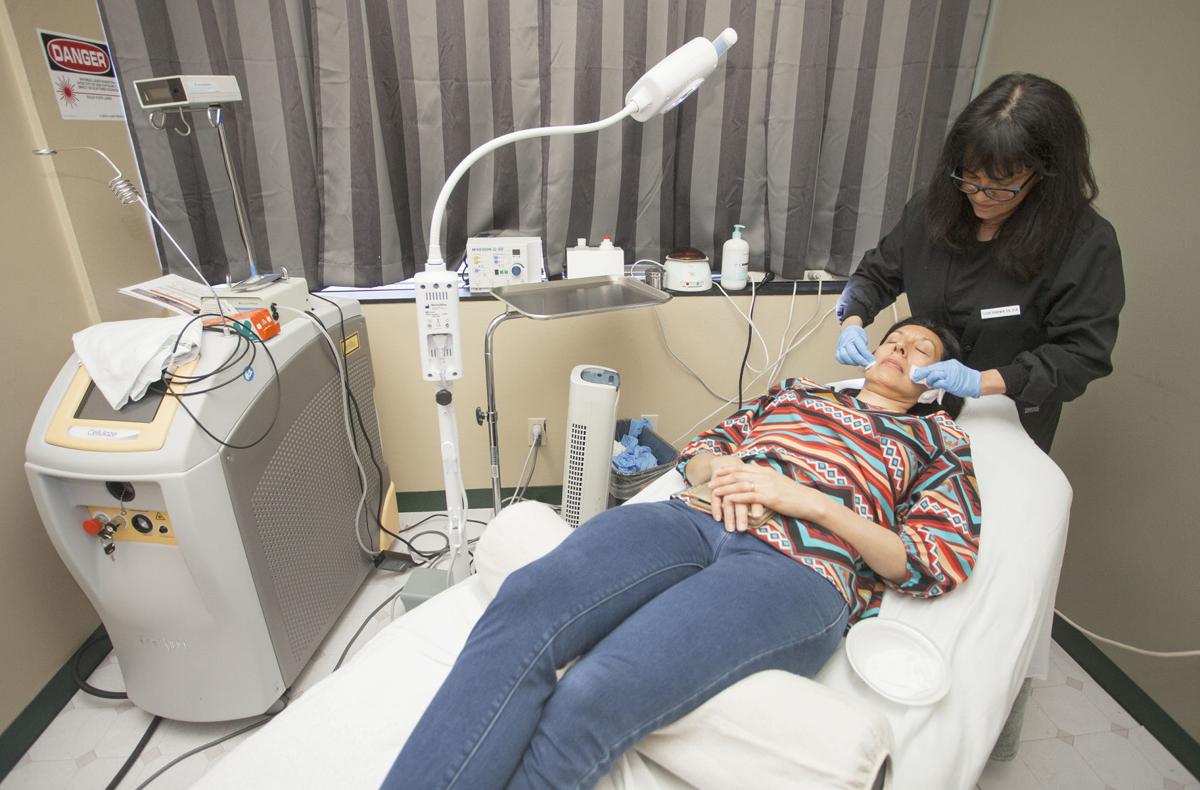 Susan Monty Branfman, registered nurse at V Spa, cleans Ana's, who prefers not to give her last name, face before the botox injection on Friday, May 8. Ana has been a regular guest at the V Spa since it opened its door in December.

Dr. Yvette Westford, owner of V Spa, poses for a portrait at her clinic spa on Friday, May 8. The OB gyn started solo practice in December to focus on vaginal rejuvenation and the clinic also provide new fat laser and other spa services.

Susan Monty Branfman, registered nurse at V Spa, cleans Ana's, who prefers not to give her last name, face before the botox injection on Friday, May 8. Ana has been a regular guest at the V Spa since it opened its door in December.

Patients often come in and, at first, are afraid to talk about their painful or uncomfortable issues.

Westford said this can cause distress on an otherwise healthy relationship.

Her job as an OB-GYN allows her to honestly listen to her patients' body issues and work toward helping them live healthier and more satisfying lives.

This procedure is essentially a facelift for the vulva and vagina to tighten the inner walls of the vagina and improve its outer appearance for a refreshed look and feel.

Westford said she's seen cases in which Crossroads women silently suffer from urinary incontinence after having children or the discomfort of dryness because of the lack of estrogen.

She said there's no subject that is off-limits and encourages her patients to share their concerns.

"It's freeing. You're not going to be dismissed," she said. "My goal is when you leave me you feel better about yourself."

Westford knows that for many people discussing a woman's private parts is considered taboo.

But among close social circles, more and more women are talking about their OB-GYN appointments in a mature and thoughtful way.

Westford, who owns the V Spa, hopes her work will start a conversation about women's health.

"People have been wanting to talk about it. I think this is the start of something big for women," she said after hosting a presentation at the Hilton Garden Inn on a new Erchonia verju laser for fat reduction and appearance of cellulite treatment that she will offer at the V Spa.

About two dozen women watched the demonstration, and several women stayed afterward to talk to Westford.

She said after a decade of working as a board-certified OB-GYN, she decided to expand her busy solo practice into a place where she could offer a uniquely feminine perspective on enhancing a woman's image and improving sexual function.

"I've always wanted to have a practice that's holistic and female-centric," she said.

The surgeon opened her solo OB-GYN practice in 2011 and eventually got the FemiLift, which is a noninvasive laser procedure that resurfaces the vaginal tissues to improve tightening.

"There was so much interest. People started talking about it," she said.

She's always been interested in alternative therapies and opened the V Spa in December, so she could offer traditional day spa treatments for her patients.

This week, the V Spa opened at a new location, 101 Mockingbird Circle, that shares space with her OB-GYN office.

The spa, which is open from 9 a.m. to 6 p.m. Monday through Friday, offers laser hair removal, facial peels, eyebrow and lip-waxing services, botox and juvederm injections and weight-loss programs.

She hired two experienced registered nurses she calls her right and left hands.

The spa's esthetician and registered nurse, Jaclyn Schmedt, said what's different about the laser used at the V Spa is that it works on all skin tones - not all lasers do.

She's worked in the spa business for more than a decade and said having the OB-GYN medical side in the same building as the spa helps add a level of comfort for women.

Westford is the only gynecologist in the Crossroads trained to perform laser vaginal rejuvenation and to administer the G-shot, O-shot and P-shot.

The G-shot enhances the G-spot; the O-shot helps with urinary incontinence, and the P-shot treats erectile dysfunction.

Part of being the first to offer these type of services means Westford spends a lot of time teaching residents about the procedures.

Registered nurse Susan Branfman said she's talked to patients whose marriage was on the brink of divorce because of their health.

It was something they were embarrassed to talk about.

"They have choices now," she said.

Patients tend to refer the doctor to their family members, and the practice is growing by word of mouth.

"We depend a lot on referrals," Schmedt said, adding Facebook and billboards have helped.

Westford said she hopes to change how patients feel about going to the gynecologist.

"The whole idea is I want this to have a different feel to it," she said.

Westford said she's heard criticism from other doctors who question her motives of offering the day spa and alternative medical services.

According to the American College of Obstetricians and Gynecologists, there has been an increasing number of practitioners offering various types of vaginal surgeries marketed as ways to enhance appearance or sexual gratification.

The committee's opinion, which was reaffirmed in 2014, is that there are ethical issues associated with the marketing of these procedures and the national franchising in this field.

But Westford said she feels it should be a requirement for OB-GYNS to be responsible for the beautification of the vagina.

"My service is not just doing a pap smear," she said. "It's about educating women on how to be well."