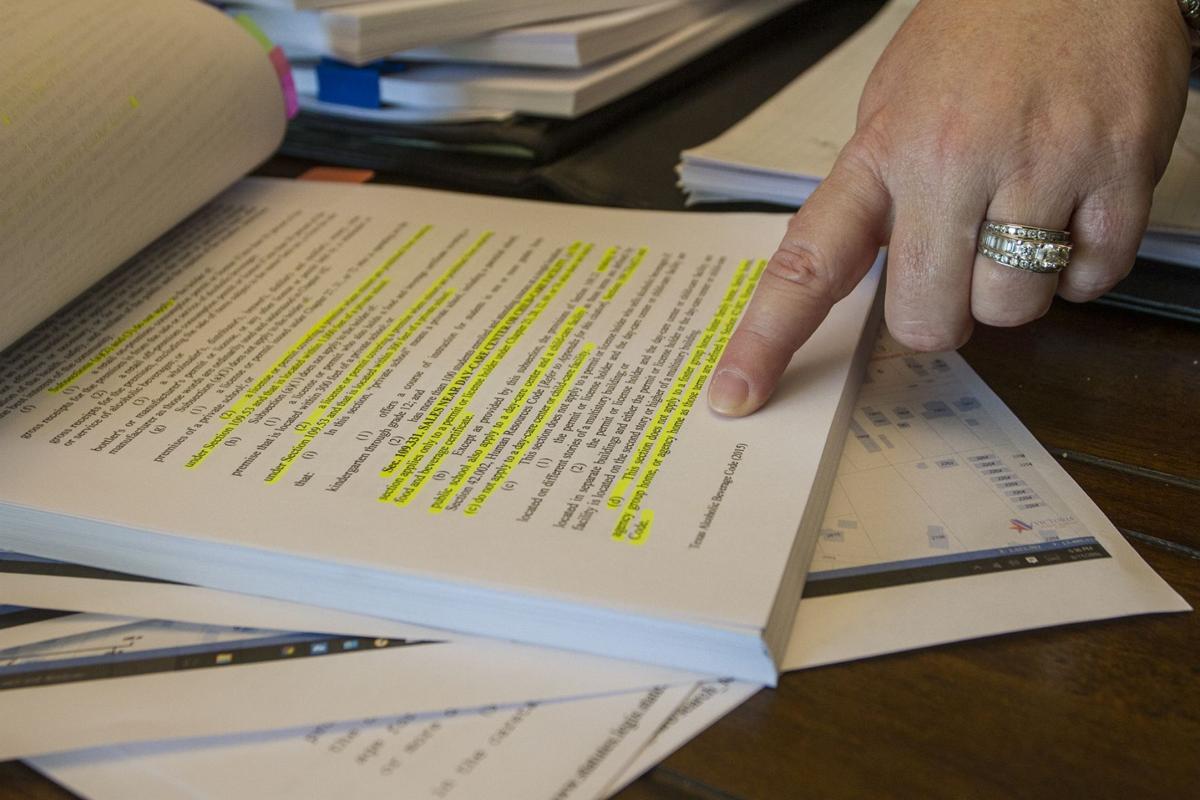 Heather Steinkuehler points to one of the city ordinances in regards to the vacant lot she hopes to transform into an upscale lounge. @Savannah Blake/sblake@vicad.com 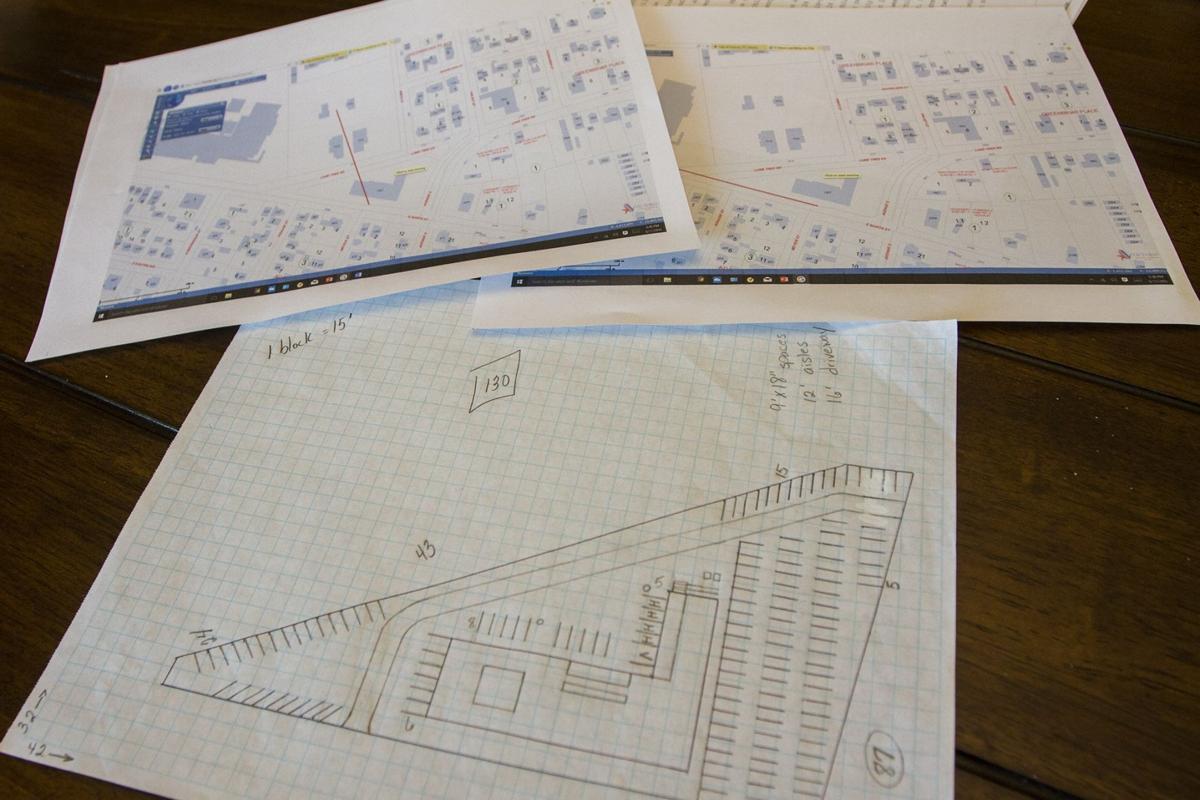 City maps are laid out to show the distance of the building from both Patti Welder Middle School and the church nearby as well as a personal sketch of the building and land to show a preliminary plan of action for the area. 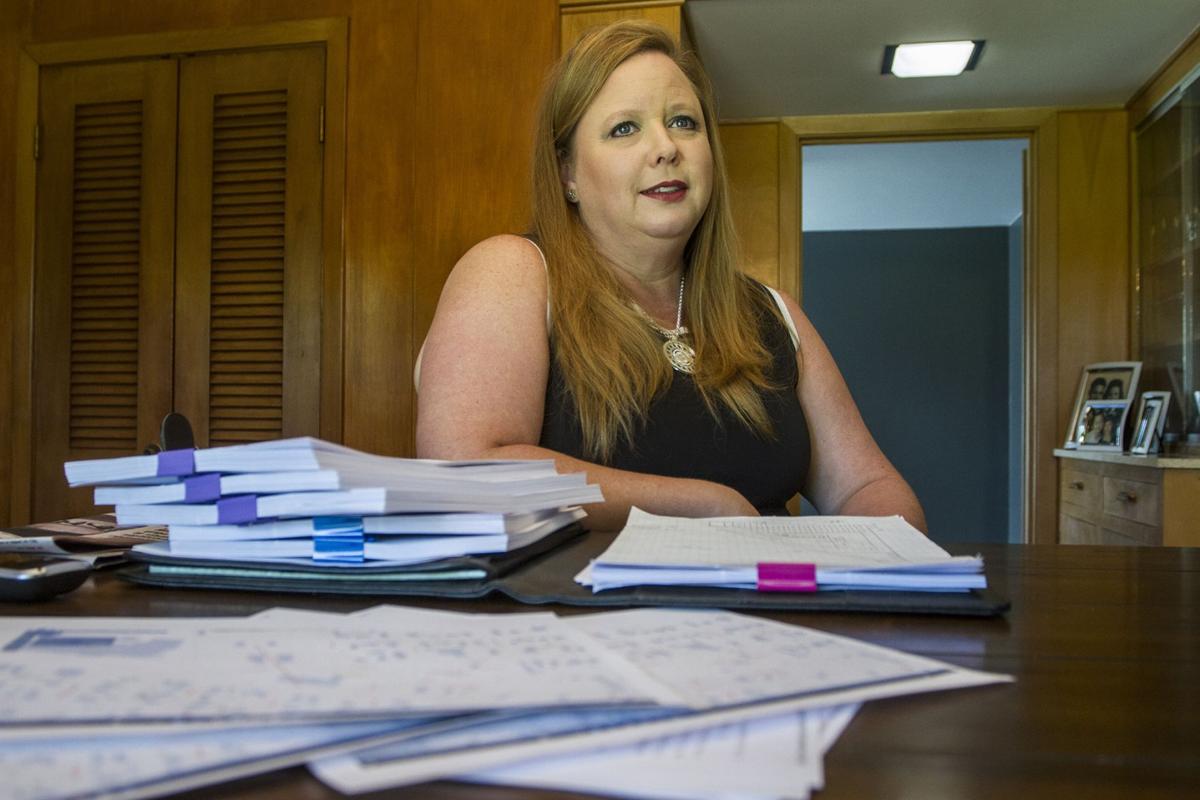 Victoria resident Heather Steinkuehler sits at her dining room table with several city handbooks and TABC printouts in front of her. Steinkuehler recently purchased the vacant building next to Patti Welder Middle School in hopes of turning it into an upscale lounge, but the project is currently at a standstill due to nonprofit agencies challenging current regulations.

Heather Steinkuehler points to one of the city ordinances in regards to the vacant lot she hopes to transform into an upscale lounge. @Savannah Blake/sblake@vicad.com

City maps are laid out to show the distance of the building from both Patti Welder Middle School and the church nearby as well as a personal sketch of the building and land to show a preliminary plan of action for the area.

Victoria resident Heather Steinkuehler sits at her dining room table with several city handbooks and TABC printouts in front of her. Steinkuehler recently purchased the vacant building next to Patti Welder Middle School in hopes of turning it into an upscale lounge, but the project is currently at a standstill due to nonprofit agencies challenging current regulations.

A Victoria property owner is speaking out after several nonprofit agencies are pushing for change in the city's bar ordinances.

Heather Steinkuehler, 45, of Victoria, said she and her husband were shocked when they heard her plans to start a business at a long-vacant school building had caused trouble.

"It's been an eyesore," she said Friday.

She purchased the old William Offer Elementary School at 1902 E. North St. on May 27 and immediately started cleaning it out.

"It was a crack house," she said. "I can't tell you how many soiled mattresses we pulled out of there."

The Victoria school district sold the building in 2004, but for 12 years nothing developed at the old school house next to Patti Welder Middle School.

Steinkuehler said she fell in love with the old building the first time she drove by it.

She saw the perfect location to repurpose and open a business unlike anything else in town.

"What we're trying to do is a very upscale lounge with pool tables and a dance hall," Steinkuehler said. "That area of town needs something upscale brought in. It needs something to uplift the community."

Her property development company, Steinkuehler Properties, has invested in the project and researched how they could transform the 13,000-square-foot building and open it for business by summer 2017.

She envisioned the upscale lounge would be open three nights a week.

She and her family, who would help with management, decided the staff would wear professional attire, and a dress code would be enforced.

They also made the decision the business would not allow anyone under the age of 21 inside.

"My standards are extremely high," she said.

They visited other bars in bigger cities for inspiration. Her 23-year-old son has also talked to sound technicians.

The look inside would feature the exposed brick but would also include new floors and roof. Most of the classroom walls inside would be knocked down.

Plans are to build a solid 8-foot fence around the back and part of the sides of the triangle-shaped lot.

Steinkuehler said she plans to have the exterior of the building well lit every night. It would be guarded by security officers.

One of the first things she did was replace the burnt-out security lights in the back of the property.

She has worked with the city's development coordinator and the Texas Alcoholic Beverage Commissioner and consulted attorneys to ensure her business would comply with laws.

She said she would seek a "mixed beverage late hours" permit to operate.

The family has made a substantial financial investment already, but now the project is at a standstill.

The issue was brought up to city officials at the last two City Council meetings by nearby nonprofit agencies concerned about a nightclub moving in so close to the school, a church and an emergency women and children's shelter.

The current city ordinance requires that a bar's door must not be within 300 feet of the door of a school, church or public hospital.

The agencies are proposing changing the current city code to measure the distance between establishments by property line instead of to the door and to also add children's homes to the list of restricted establishments.

But adding further restrictions, Steinkuehler said, could potentially hurt many more businesses in the future.

These businesses would be grandfathered in now but she questioned what would happen to a business if it were restructured or its license was lost and a new permit would need to be filed.

"This is going to affect a lot of businesses," she said.

Her closest new neighbor is the Brownson Home, located about 60 feet away, which is a permanent residence for children whose parents can no longer care for them.

"We wouldn't do anything to hurt children," she said.

She has three grown children and has worked in the health care industry more than 25 years.

Steinkuehler said she was dismayed because what she hopes to accomplish will make the area much safer.

"People had been getting in there doing horrible things," she said.

Part of the battle, she said, is getting rid of the gang members who had used the old building.

The property already has experienced two break-ins since they started clearing out the building.

"That's a fight we're willing to go through," she said.

She said she has a lot of respect for what the nonprofit agencies do, but she wished the conflict could have been prevented by a phone conversation.

The issue will be discussed and possible revisions to the city's ordinance will be presented at the Sept. 6 City Council meeting.

"We feel strongly about what we want to do," she said. "I know a lot of people in Victoria are welcoming it and looking forward to it."