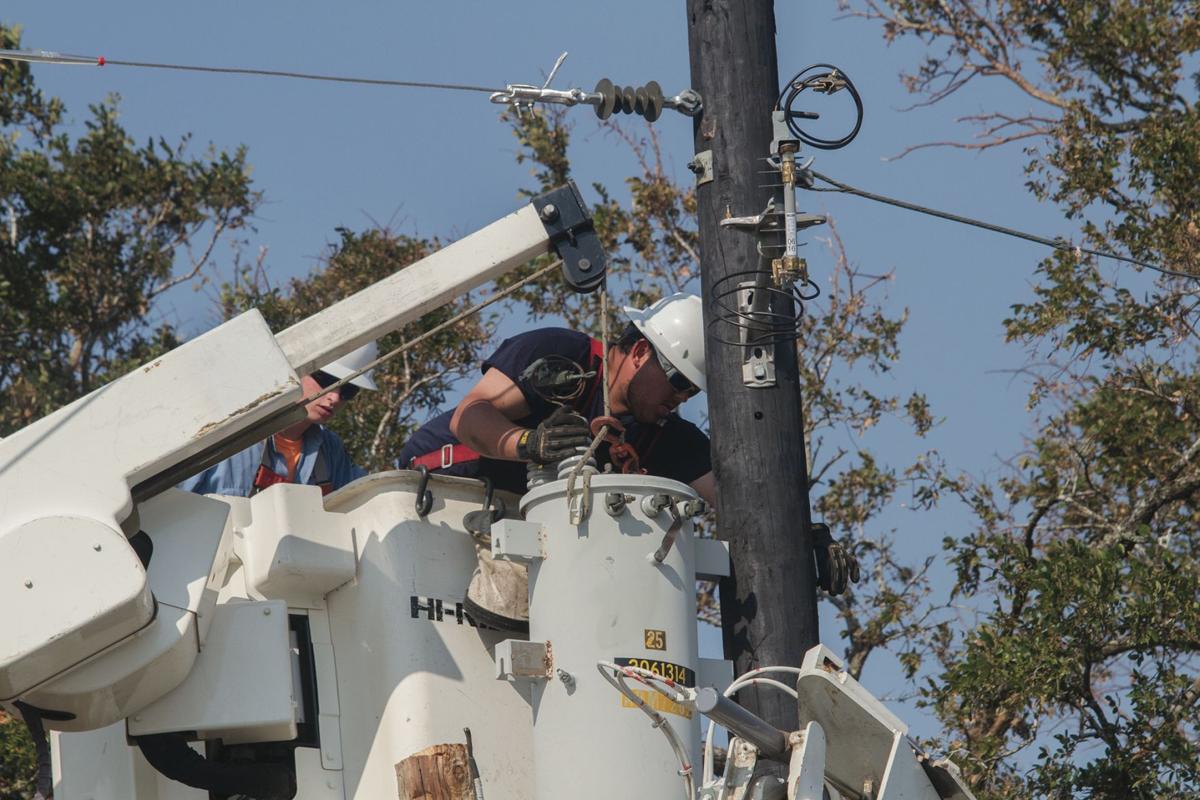 Dylan Holiman, a linesman with One Source T&D from Lawton, Okla., works on transferring electrical lines from an electrical pole that was downed by Hurricane Harvey onto a newly installed one with assistance from apprentice Billy Gordon in the 2300 block of East North Street. 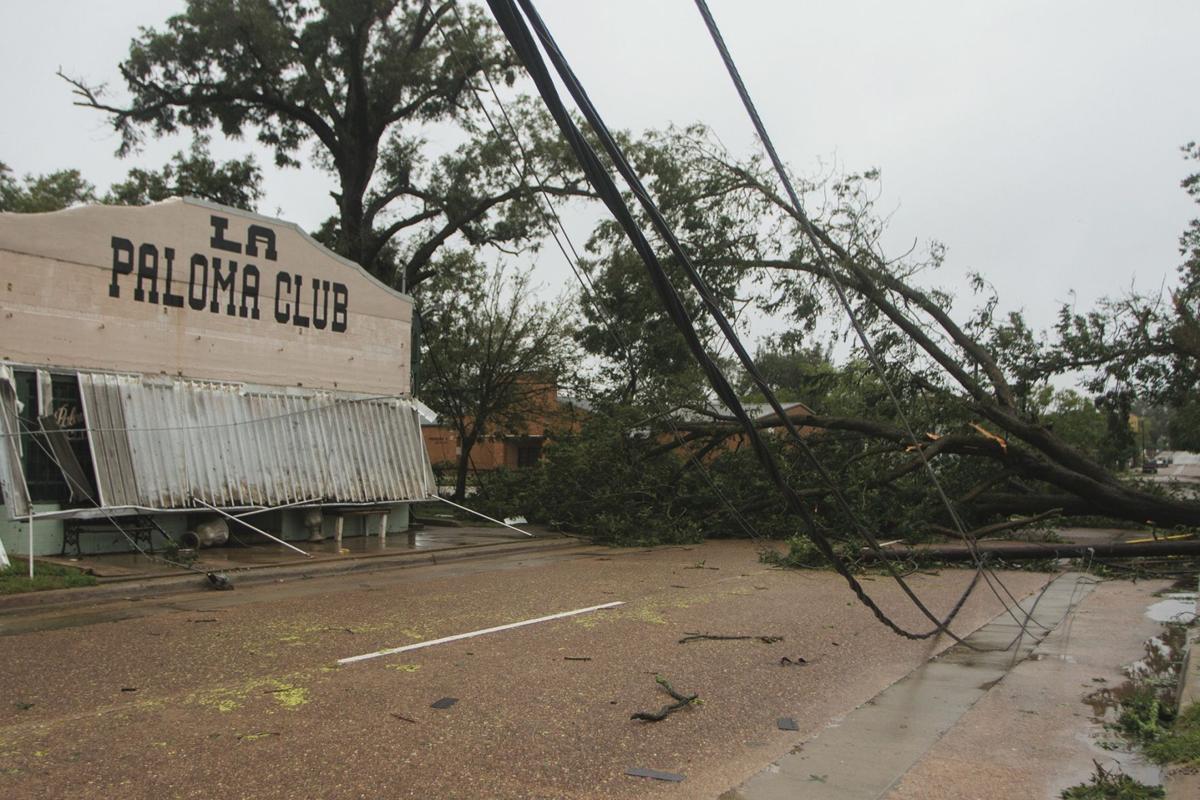 An uprooted tree that destroyed a power line in the wake of Hurricane Harvey lies in the 700 block of South Bridge Street.

Dylan Holiman, a linesman with One Source T&D from Lawton, Okla., works on transferring electrical lines from an electrical pole that was downed by Hurricane Harvey onto a newly installed one with assistance from apprentice Billy Gordon in the 2300 block of East North Street.

An uprooted tree that destroyed a power line in the wake of Hurricane Harvey lies in the 700 block of South Bridge Street.

When Victoria went dark after Hurricane Harvey, a lineman died, a handful of homes burned down, thousands of residents lost access to drinking water and the local economy took a hit.

All this raises the question: Should power lines in Victoria be buried to lessen the effect?

Florida and Puerto Rico, where hurricanes landed in the weeks that followed Harvey, are weighing the pros and cons of migrating their electric grids underground, too.

How the system works

AEP Texas maintains and repairs power lines, reads electric meters and connects customers to the grid as directed by other companies selling electricity in the area.

Transmission structures carry lines that run from a power plant to a substation. A distribution line carries the power at a lower voltage from the substation to the end user, a home or a business.

AEP Texas spokesman Larry Jones said the cost is one of the reasons many communities opt not to convert.

AEP Texas righted them and restored power to almost all of its customers 15 days later.

It was a task that Jones estimates cost $300 million, which AEP could recoup the next time it goes before the Public Utility Commission for a base rate review.

If AEP Texas does that, the $300 million expense could eventually be reflected on Crossroads residents' electricity bills.

But there have already been documented consequences from the 15-day outage.

A lineman from Tennessee, one of thousands AEP Texas brought in to aid in the restoration, died Sept. 5 after he was electrocuted.

His death was one of many electricity-related calls the Victoria Fire Department responded to after Harvey.

Fortunately, it was the only fatal one.

From Aug. 24 to Sept. 4, the department battled five structure fires and answered 101 calls about power lines down or other electrical hazards in the city and county.

One home was a total loss after strong winds pushed a power line on top of it. Another was destroyed when a homeowner without electricity refilled a generator and the fumes ignited.

City of Victoria Fire Marshal Tom Legler said throughout the year, the department responds to vehicles crashing into power poles.

"You remove some risk if they are out of the open, but if anybody is working and needs to dig, then it could become dangerous to have buried power lines," he said.

Victoria County Fire Marshal Richard Castillo said regardless of whether power lines are buried, fires could start if home and business owners don't shut off their breakers during an extended outage.

The fires could start if their property is damaged and re-energized, he said.

Even with employees willing to work, many couldn't reopen without electricity or water.

Tom Halepaska opened his bakery on John Stockbauer Drive on Aug. 29, limiting the hours of operation to the hours employees who hadn't evacuated were able to work.

He described the electricity outage as devastating for a small business owner.

"I mean, there's tons of stuff that continues on whether you have anyone coming in the front door or not," he said. "I don't have insurance against that kind of loss, and most small businesses don't. It's called business interruption, but sometimes insurance companies limit (your coverage) if you're near the coast."

The two big arguments against burying power lines are this:

"It wouldn't have helped with the 21 inches of rain in (Hurricane) Beulah (in 1967)," said Halepaska, who is also a Victoria city councilman. "We've got to look at this carefully. It's too easy to pick a simplistic solution, and I think burying power lines is a simplistic solution."

City engineer Ken Gill said typically there is not enough room to add a power line underground. Already other utilities, such as storm sewer, water, sanitary sewer, gas and fiber optic lines are underground, leaving little room for much else.

Gill has worked for the city for 11 years and cannot remember a time when it has purchased extra right of way on a street construction project for the purpose of burying power lines. Downtown Victoria, where power was restored in about 12 hours Aug. 26, is the exception.

"I'll give you the last project, and that was a very expensive project: Sam Houston. We purchased right of way on that project, primarily at the corners, to improve turning radiuses," Gill said.

Roger Anderson, a retired senior research scientist at the Center for Computational Learning Systems at Columbia University, bats away these criticisms of buried power lines, though.

Since retiring, Anderson has started a company that, with due diligence and data, tells investment firms in New York City what they should invest in. He's written for years about how buried power lines are a sound investment.

He remembered people in lower Manhattan had their power restored after Hurricane Sandy within two hours because the lines were underground.

"The electric cables are made out of copper and are embedded within what's basically a polyurethane wrapping that lasts for 100 years or so," Anderson said. "All you have to do is drain the water."

Performing maintenance on underground power lines also is not difficult with manholes.

"Once you dig a vertical cylinder for a manhole, there are drilling tools that will drill underground without tearing the streets up at all," he said. "Think about it like a Roto-Rooter-type thing."

He said Gill's assertion that there's not enough room for the power lines underground is "nonsense," and he wondered why many have such trouble envisioning them there where other utilities are - out of sight.

"You wouldn't even think about putting a sewage line above ground," he said, chuckling.

A third argument against burying power lines is that events like Harvey are unpredictable.

But scientists have hypothesized hurricanes like Harvey may become the norm.

According to the U.S. Global Change Research Program's Climate Science Special Report, the planet is warming. Sixteen of the past 17 years were the warmest on record. At the same time, rainfall has increased across much of the country. In Texas, the maximum daily rainfall has increased by between 10 and 19 percent for every consecutive five-year period since 1901.

Katharine Hayhoe, a climate scientist at Texas Tech University and one of the authors of the report, said in an interview the day Harvey made landfall that climate change is affecting hurricanes, not causing them.

Hurricanes gain energy from warm water, and more moisture in the atmosphere increases the amount and intensity of rain hurricanes drop, Hayhoe said.

"People always want to know, is it climate change or is it not? The answer is it's in between," she said.

The city already requires buried power lines for new residential and commercial development. However, it doesn't consider the option when it rebuilds streets.

Friday, the city reduced the westbound frontage road of Zac Lentz Parkway to one lane from North Navarro Street to Briggs Boulevard to install sewer lines.

The more than $2 million project will take the flow off the east side of the city and bring it to the west side. This will give the east side some added capacity to develop in the future, said Darrell Seibert, an engineer for the city's public works department.

"That's going to be under AEP," he said. "That's their utility and so, as a city, we wouldn't be involved in that."

While Halepaska vows to look at hardening the electrical grid after Harvey, AEP Texas said it has always tried to.

Since 2000, all transmission structures AEP Texas has installed have been tubular steel poles rather than the wooden ones used in the past.

The company also plans to spend about $1 billion a year during the next few years to improve its transmission structures or distribution lines. That could include envisioning new structures or lines or improving existing ones, AEP Texas spokesman Larry Jones said.

Victoria might look up U.S. 59 to the city of Sugar Land, which received about 21 inches of rain after Harvey.

"Power was out for a short time, but most had power within a day or two of the storm," said Keri Curtis Schmidt, the president and CEO of the Fort Bend Chamber of Commerce.

Anderson said what happened in Sugar Land is promising, even if that city likely buried its power lines for aesthetics.

"That was a selling point for their community, and that needs to be added to the due diligence," he said. "The trick is to get that due diligence out from inside the company that makes money on these hurricanes.

"They don't want to (not have any) work to do except flip the switch and restore the power. They like to have all of those electric poles that they have to put back up because then they can go to the regulatory commission and get the $300 million, and 7 or 8 percent of that is profit for them."

Officials with AEP, Victoria Electric Cooperative and South Texas Cooperative discussed how the companies responded to Hurricane Harvey and ho…