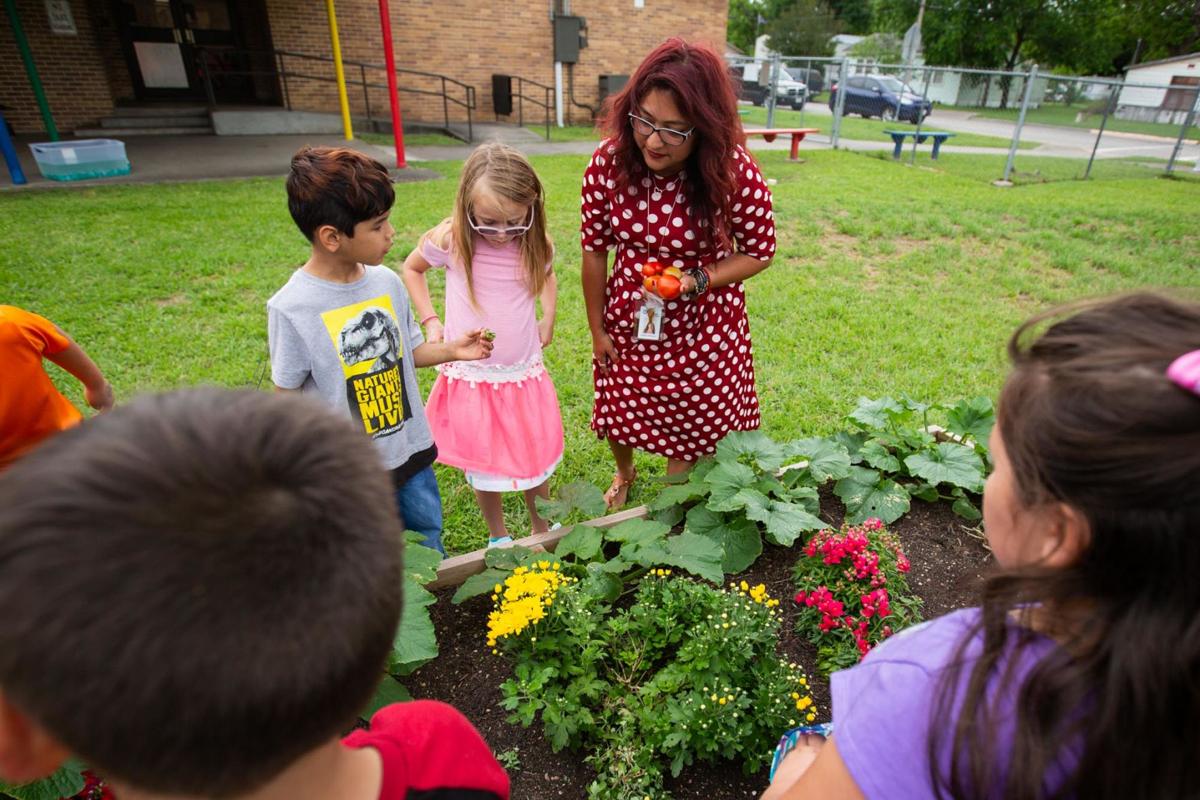 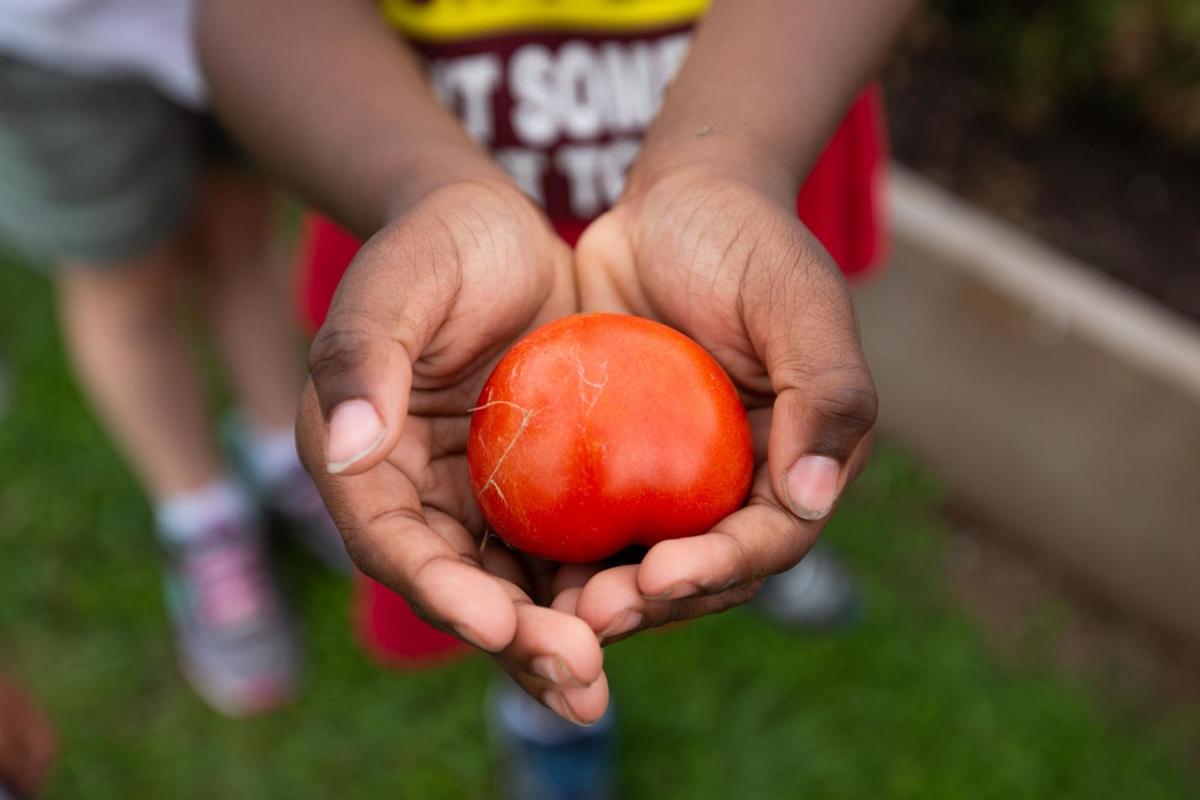 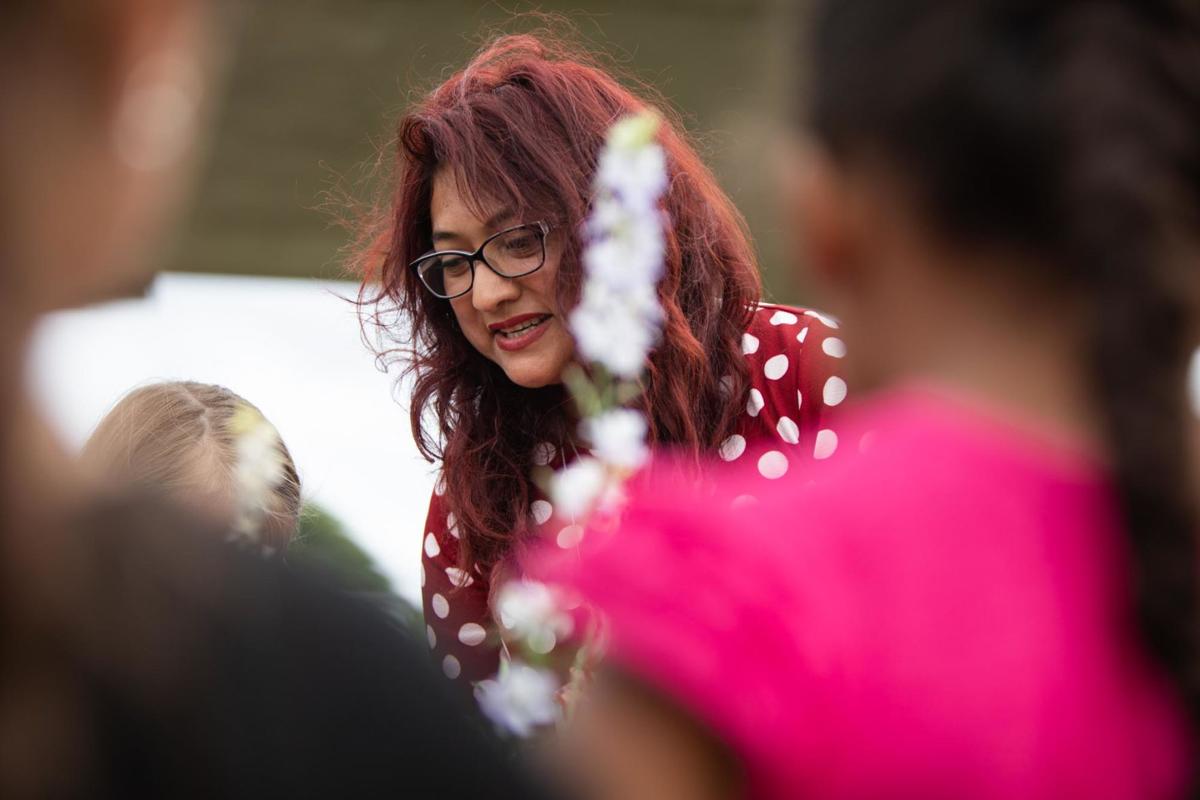 Kindergarten teacher Sandra Caltzonzin looks at some flowers with her students in the F.W. Gross Elementary School garden.

Kindergarten teacher Sandra Caltzonzin looks at some flowers with her students in the F.W. Gross Elementary School garden.

When F.W. Gross Elementary School students were sent to Jesse Olivarez’s office for behavioral issues during the last year, he told them that he needed to go water the gardens.

“I had my little $1.99 pail I bought from the dollar store, and I let them do it, and it became therapy because they were managing something and they want to manage their behavior as well,” said Olivarez, the school’s family engagement specialist. “You teach them not by getting after them but by teaching them how to take care of something, and they take ownership.

“Then they’d come in and say, ‘I’m having a problem; can we go out there and water?’”

The produce and flower gardens at F.W. Gross Elementary School are among more than 10 community gardens that have sprouted up in the Crossroads during the last five years. The majority of these gardens are at schools, where students experience a variety of health, educational and emotional benefits while getting their hands dirty.

“The goal is that the kids know where their food comes from and the nutrition in that food,” said Boogie Barber, a Healthy South Texas agent for Refugio and Goliad counties.

The Healthy South Texas program, which caters to 27 counties, was launched in September 2015 as a pilot program for the state. South Texas was selected for the pilot program because of the region’s rising obesity, emerging infectious diseases, high uninsured rates and limited access to health care, according to the program’s website.

Most recently, a community garden was added to the ACE Hope Facility, a small Victoria school district campus that helps students dealing with emotional and behavioral issues improve their social skills and behavior during an individualized length of time. Two plots were installed in March on the side of the facility, which currently has eight students.

Shelia Gayle, a licensed psychologist with the Victoria school district, said the gardens are beneficial for not only students’ physical health but also their emotional well-being.

“It is relaxing if you have anxiety, (and with) depression, it is grounding,” she said. “We have so much technology, and that is great, but to get back in touch with the Earth is really important because we lose focus and connectivity.”

Students will start making meals with the produce once it’s harvested because the facility has a full kitchen, said Dr. Alfred Lopez, the ACE Hope facility administrator.

“I don’t think they think of it (the gardens) as schoolwork; they think of them as something fun and love to go out there and look at the plants,” he said. “They say, ‘Look, I planted that one!’ and are excited to see them growing.”

About 25 families in the unincorporated community were provided with produce from the gardens during their peak, said Louise Escalante-Torres, principal of Bloomington Elementary. The gardens were destroyed in Hurricane Harvey and have not been restored, though Escalante-Torres said she hopes to start the project back up during the 2019-2020 school year.

“Harvey took a lot of things, but it is something that we are trying to get going again next year,” she said. “It’s important in the sense that we need fresh vegetables, and many families don’t have a way to get groceries out in the county ... It is also important for our kids to learn how to eat healthier and that there are alternatives to fast-food-type stuff.”

Community gardens are particularly important in areas like Bloomington, which is considered a food desert, Bochat said. Food deserts are generally defined as low-income areas where residents do not have access to affordable fruits and vegetables because instead of grocery stores, the regions often have convenience stores and gas stations with limited nutritious food.

Olivarez spent more than a decade working near Laredo as a project manager overlooking colonias – communities that he said ranged from one family to several thousand in isolated areas outside of Laredo.

“With colonias programs, we tried to get agencies to help start community gardens in these isolated areas,” he said. “And here, it is hard for a lot of people that don’t have transportation to walk to H-E-B; that is a good distance, at least over a mile and a half or so.”

Olivarez said he has watched the garden create unity in the F.W. Gross community.

“When you put food in somebody’s hands or when they eat food they grew, it makes them happy,” he said. “It builds up a lot of self-esteem, positive behavior, more camaraderie because people are protecting what’s theirs here, kids are able to relate and nobody points a finger at somebody who’s in need of something.”

Much of the harvested produce goes home with parents when they pick up their students from school, Olivarez said.

“About 96% of our kids are disadvantaged, and the parents here, they have a struggle with that – their incomes are not that high, and produce is so high that a lot of people can’t afford it,” he said. “So they saw cabbage and said, ‘Yeah, we’ll take it.’ They do wonders with it. The same thing with broccoli. If they don’t like it, they’ll find ways to cook it.”

The gardens have been largely taken care of by Sandra Caltzonzin’s kindergarten class during the 2018-2019 school year, he said.

“We talk about the needs of plants, like that they need to have space, air, water and just attention,” Caltzonzin said about the process. “I told them, ‘It is something that you have to keep up with; you can’t just go plant the seed and hope it comes back up. You have to meet the plants’ needs.’”

Caltzonzin teaches her students how to identify each vegetable, fruit and flower they grow and makes sure the students sample the produce when its ripe.

“We make things out of the vegetables, like we made soup and I read them a story called, ‘Stone Soup’ and they got to taste the cabbage,” she said. “They were like, ‘Wow, this is what it taste likes?’ because a lot of kids have never tasted (some) vegetables and, for example, don’t know that cabbage is a leaf that you’re eating.

“They’re actually learning to feed themselves and I always tell them, ‘as long as you know how to garden, you will always be able to feed yourself.”

Community gardens in the Crossroads

Community gardens in the Crossroads include but are not limited to:

Healthy living gets 2 green thumbs up

As anyone who loves to spend a few hours getting their hands dirty and later reap the reward of fresh produce can tell you, gardening has a wa…