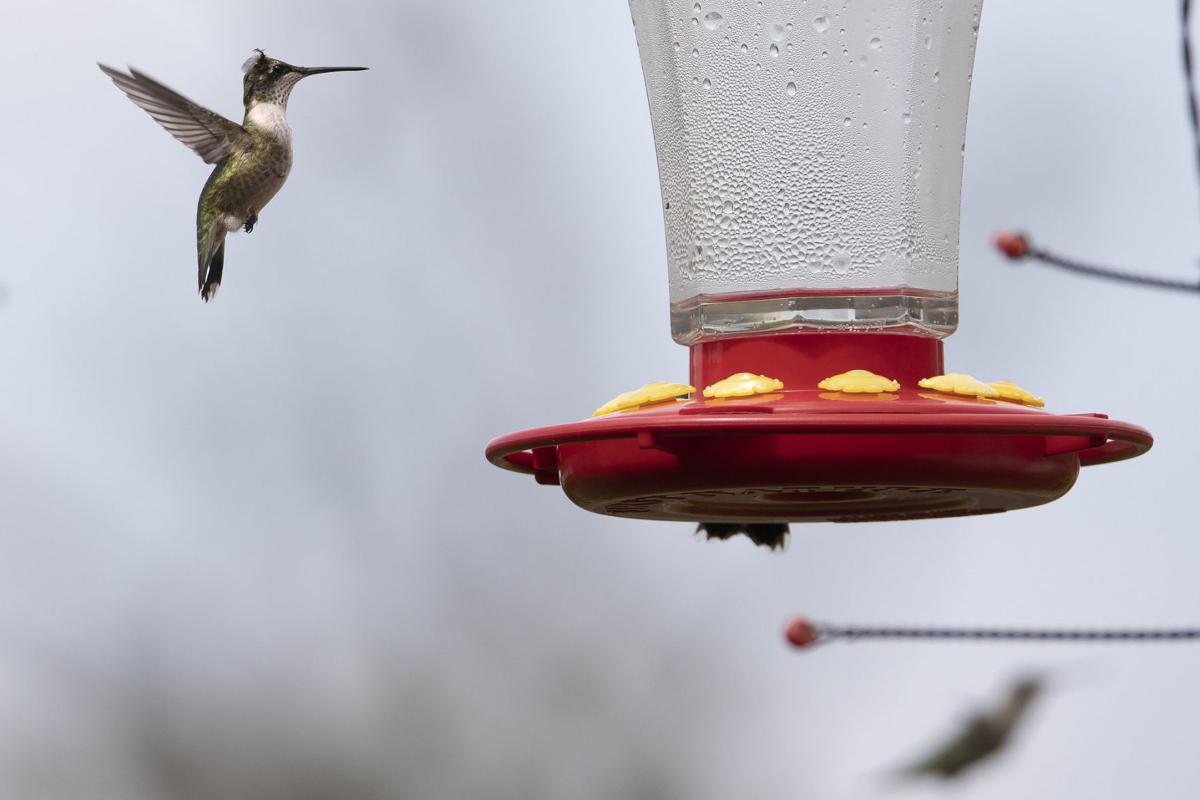 A young male hummingbird prepares to land on a feeder. A hummingbird’s sex can be identified by the color of their throat. Females have a white gorget, while males have a dark ruby gorget and young males’ gorgets are spotted. 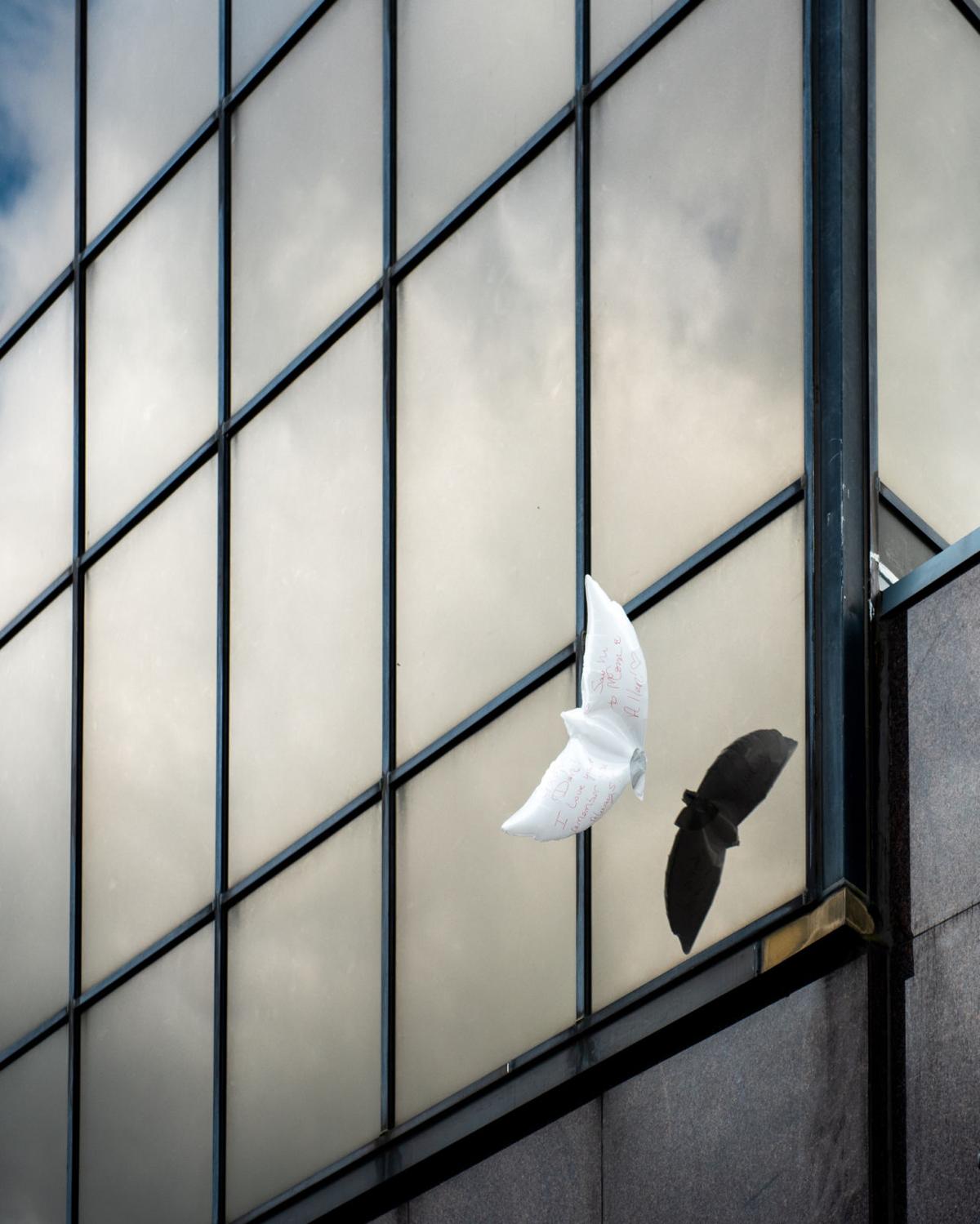 A dove balloon from the Team Tangles fundraising tent at the 2018 Victoria County Relay For Life catches a reflection on the Prosperity Bank building in DeLeon Plaza.

A young male hummingbird prepares to land on a feeder. A hummingbird’s sex can be identified by the color of their throat. Females have a white gorget, while males have a dark ruby gorget and young males’ gorgets are spotted.

A dove balloon from the Team Tangles fundraising tent at the 2018 Victoria County Relay For Life catches a reflection on the Prosperity Bank building in DeLeon Plaza.

A blur of iridescent green feathers buzzes through the humid fall air.

Weighing little over a tenth of an ounce and traveling at up to 60 mph, the ruby-throated hummingbird, one of millions that pass along Texas’ gulf coast during their late-summer migration south, is hardly noticeable.

That is, unless you’re Adriana Cooke. Her office’s north-facing window in downtown Victoria’s Prosperity Bank was bombarded by them daily for more than two months, she said.

On any late summer day, outside her window lay three to four hummingbirds in various degrees of carnage.

It’s a fate that awaits about one billion birds each year.

“Birds, with their pea-sized brains, see the reflection of the sky, clouds and trees in the glass which all appear to be ‘real’ so they keep flying until they strike the glass which usually causes death or severe internal injury,” said Clifford Shackelford, statewide non-game ornithologist for the Texas Parks and Wildlife Department, in an email.

The Prosperity Bank building, with its large wall of black, shiny windows, looks to birds like a continuation of the sky.

“That looks like highly reflective glass – almost like mirrors – that was commonly used in 1970s and 1980s construction,” Shackelford said in reference to a photo of the building. “Notice how reflective it is – I can see the trees and next door building.”

The north-facing direction spells trouble for southbound birds, although Shackelford said any window can be hazardous.

Although most of the bigger birds she’s seen hit the windows will get back up and shake it off, Cooke said the hummingbirds often can’t handle the impact.

According to Shackelford, injury depends on the bird’s speed and momentum when it hits the glass.

From a standing start, hummingbirds can rev up speed to 60 mph in a distance of three feet and have a higher energy output per unit of body weight than any animal in the world, according to the Texas Department of Wildlife.

The death caused by impact isn’t a pleasant one, or necessarily quick.

“Death, sadly, comes hours later after a lot of pain and suffering,” Shackelford said. “To be able to fly, birds’ bones are hollow so they can snap like toothpicks.”

How to help an injured bird

1. If you find a bird dazed from a window collision, examine it for external injuries. If the wings are both held properly, neither dangling, and the eyes seem normal, see if it can perch in a branch unassisted. If so, leave it to recover on its own.

2. If the bird has a noticeable injury, get it to a wildlife rehabilitator as quickly as possible. Broken bones usually need proper attention within minutes or hours to heal properly without surgery.

3. Meanwhile, place it in a dark container such as a shoebox, and leave it somewhere quiet, out of reach of pets and other predators, for 15 minutes. Do not try to give it food and water, and resist handling it. The darkness will calm the bird while it revives, which should occur within a few minutes unless it is seriously injured.

4. Take the box outside every 15 minutes or so and open it – if the bird flies off, that’s that! If it doesn’t recover in a couple of hours, take it to a wildlife rehabilitator.

How to protect windows

ROCKPORT – Andrea Carlson relaxed in a chair Thursday on the back porch of Rhonda and Marty Cantu’s home, tucked in a quiet, unassuming cul-de…

Will you go to the next downtown Artisan Market?