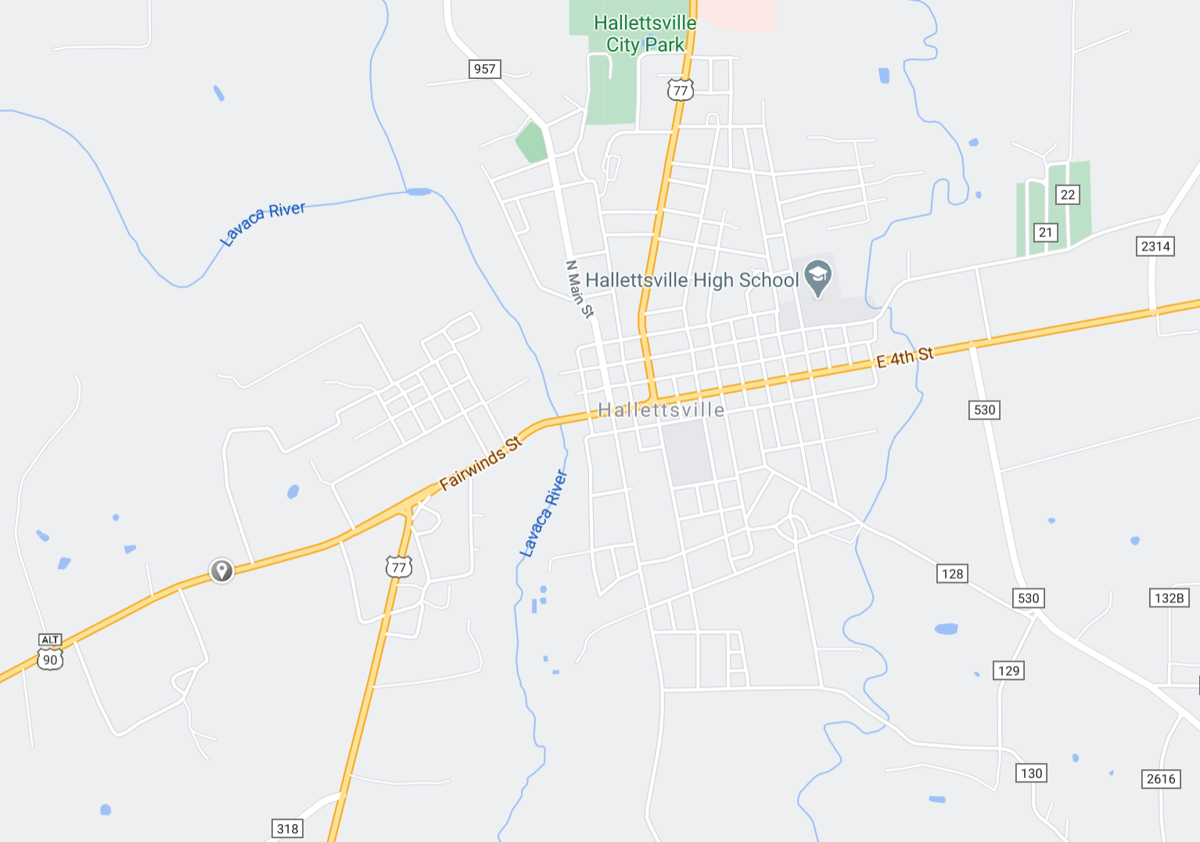 The approximate location of an attempted traffic stop west of Hallettsville that led to a vehicle chase Tuesday evening. At least seven people were injured when the vehicle crashed on County Road 461, and about three to four others fled the scene, officials said. 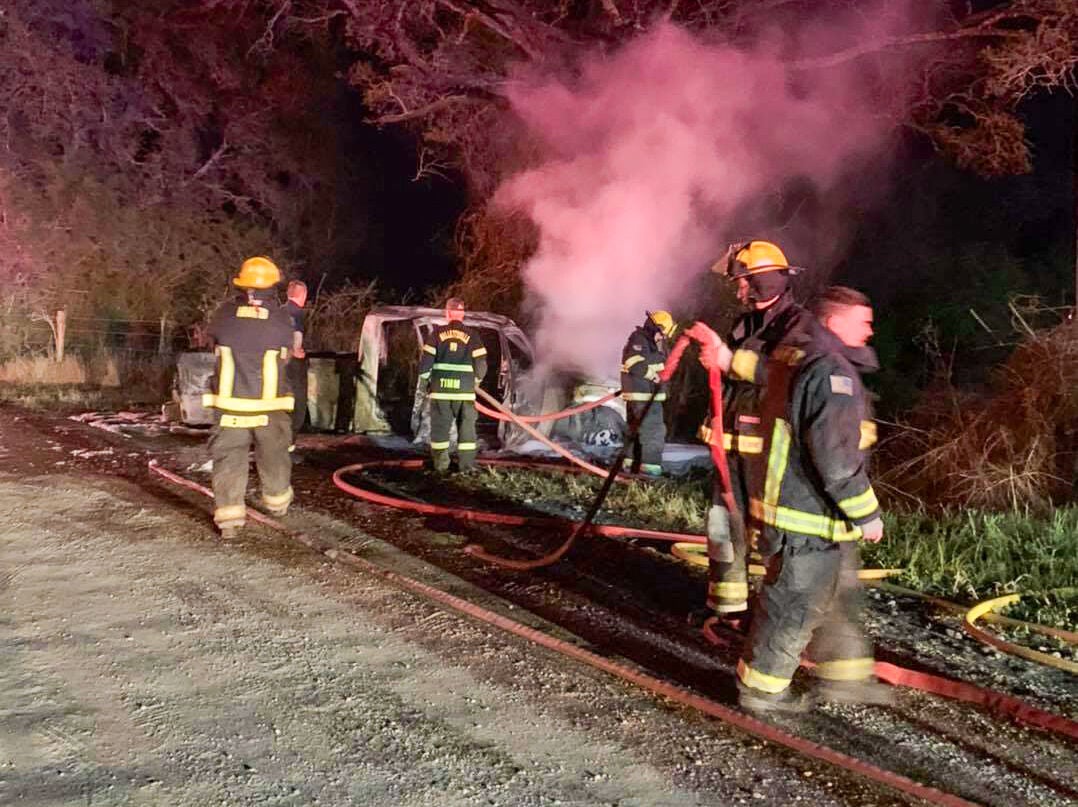 Firefighters stand near a the blackened, smouldering shell of a pickup truck that police say led them on a multi-agency pursuit in Lavaca County Wednesday. 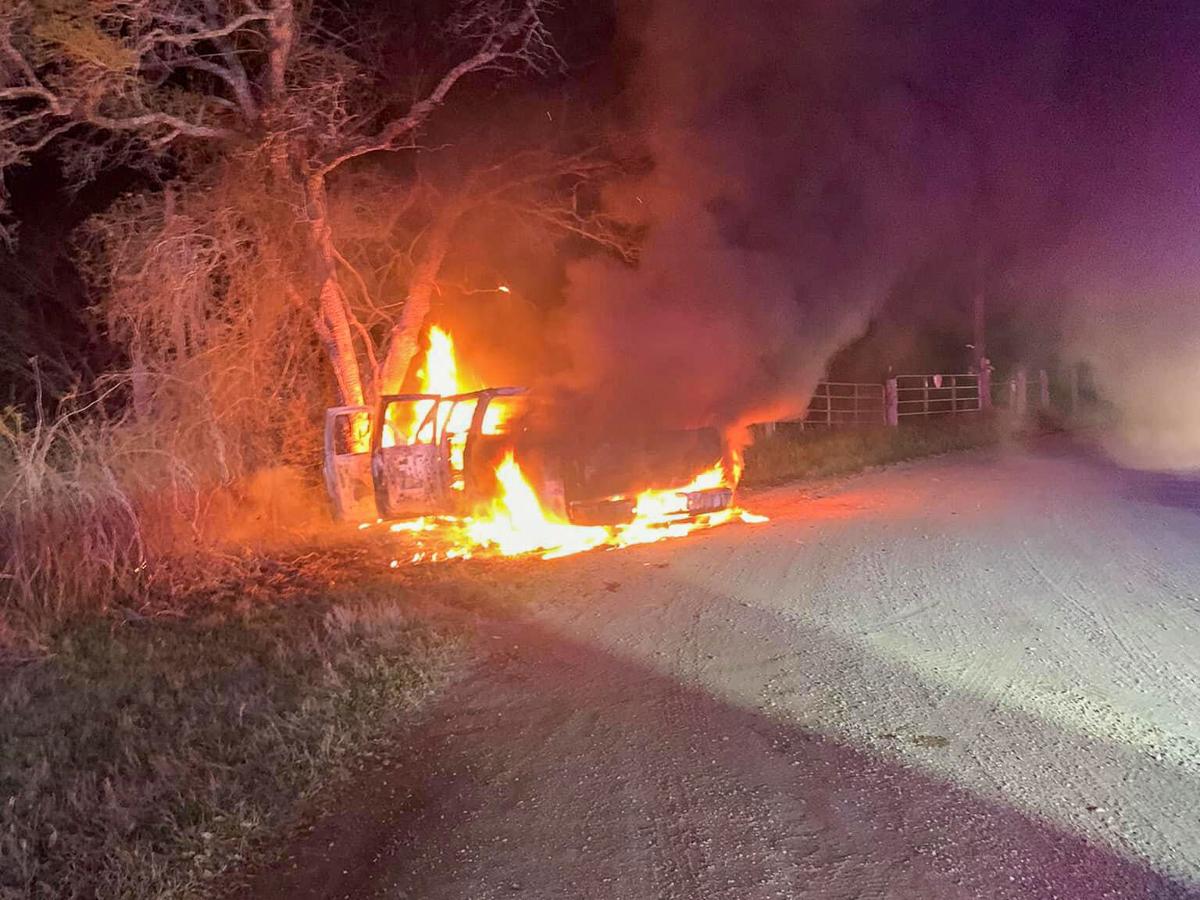 The pickup burst into flames after crashing into a tree near Hallettsville Wednesday.

The approximate location of an attempted traffic stop west of Hallettsville that led to a vehicle chase Tuesday evening. At least seven people were injured when the vehicle crashed on County Road 461, and about three to four others fled the scene, officials said.

Firefighters stand near a the blackened, smouldering shell of a pickup truck that police say led them on a multi-agency pursuit in Lavaca County Wednesday.

The pickup burst into flames after crashing into a tree near Hallettsville Wednesday.

Authorities said at least seven people, some of whom were in the country illegally, were taken to local hospitals after a pickup crashed into a tree during a multi-agency Lavaca County chase. Tuesday

That chase is one of several immigration-related incidents in the past week or so in the Crossroads. They come during a recent surge of migrants at the southern border.

The chase began after an attempted traffic stop on Fairwinds Street west of downtown Hallettsville about 10:25 p.m.

Authorities were attempting to stop a white Ford F-250 in the 800 block of West Fairwinds Street when the vehicle took off, according to a Facebook post from the Hallettsville Police Department.

The pickup truck traveled south on U.S. 77 at a “high rate of speed,” officials said. The vehicle traveled down multiple county roads before crashing into a tree on County Road 461, where it was engulfed in flames, officials said.

About three or four people fled the scene of the crash, which occurred on County Road 461 south of Hallettsville and have not been detained, Lt. Erica Vaccaro of the Hallettsville Police Department said Wednesday.

Vaccaro said local officials have turned information about the incident over to the Department of Homeland Security.

One of the people who evaded custody was confirmed to be a Guatemalan citizen after interviewing with Border Patrol officials. That person turned themself in to Lavaca County deputies after speaking with a nearby landowner in the area, Lavaca County Sheriff Micah Harmon said.

The pursuit does not appear to be connected to an illegal immigration investigation in Victoria County where at least 12 immigrants officials suspect were in the county illegally evaded arrest last week, said Justin Marr, Victoria County sheriff.

Also unrelated to the Victoria County pursuit, a woman from Honduras was found dead Friday alongside a Goliad County highway after a truck driver spotted her body from the roadside. Investigators confirmed she was involved in a human smuggling or trafficking operation after a family member called the Victoria Police Department with a tip that the woman may have been dumped in the area, said Roy Boyd, Goliad County sheriff.

Marr said those incidents and their subsequent investigations can be taxing on the agency’s resources.

“We were depleted by the March 8 chase,” he said. “Since there were multiple vehicles and two different scenes, we had to call in deputies who were off that day to keep up with daily patrol duties.”

A recent surge of migrants that began last year has resulted in thousands of immigrants arriving at the border and the deployment of FEMA resources to assist with the growing number of unaccompanied migrant children. Additionally, Gov. Greg Abbott has announced the beginning of Operation Lone Star, which would deply more federal and state resources to the border.

In February, the U.S. Customs and Border Protection reported more than 100,000 encounters on the nation’s southwest border. That was up from about 78,000 in January.

In 2019, there were more than 1.1 million “enforcement actions” involving immigrants, according to U.S. Customs and Border Protection. Already this year, almost half as many actions have been reported.

Marr, Harmon and Boyd said they also have seen an increase in human smuggling activity in their counties in recent months.

“We strongly encourage citizens to lock their doors and to keep their houses and vehicles locked,” Vaccaro said.

No arrests were made after a vehicle authorities think was involved in human smuggling evaded deputies after an attempted traffic stop, accord…

This comment ...“We strongly encourage citizens to lock their doors and to keep their houses and vehicles locked,” Vaccaro said....is, sadly racist unless you can correlate serious crimes against persons and property to illegal smuggling operations.

It’s common sense to keep the doors to your home and vehicle locked to prevent theft. Victoria PD makes about two Facebook posts a week reminding people to take their valuables inside.

That's fine, reminders are good. Attaching this comment to a high speed chase story perpetuates a false belief that people illegally entering the country are especially dangerous to the community at large. Show me the stats, not your worries.

Well let’s see in the past week.

Smugglers have attempted to run over a Victoria County Sheriff’s Deputy. (Story in the Advocate)

A Honduran woman’s body was dumped in Goliad County by the people who smuggled her in to this country. (Story in the advocate)

Smugglers killed 8 people, that they were smuggling near Del Rio, Texas when they evaded DPS on a traffic stop.

They continue to evade Law Enforcement putting our Police, Deputies and Troopers at risk along with the rest of the public on the roadways.

While not every person who enters the US illegally is a violent individual, the simple fact of the matter is human smuggling, human trafficking, sex trafficking can lead to other violent offenses. These smugglers do not care about you, your family nor do they care about the people paying them to get in here.

So no reminding people to lock their homes and their vehicles is not a racist statement.

We are a minority family. I will let my neighbors know that it is racist that they lock their house. I will also never lock my car when I am at a minority business. Also, the people running broke two laws: 1. Entering the country illegally.

Claudia -- You're right. How could anyone possibly imagine that immigrants in the country illegally, hiding out, running from the law, could be more of a threat than a lawbreaking citizen? BTW, what race was slandered in the "racist" comment? Hint: "Illegal Alien" is not a race. smh