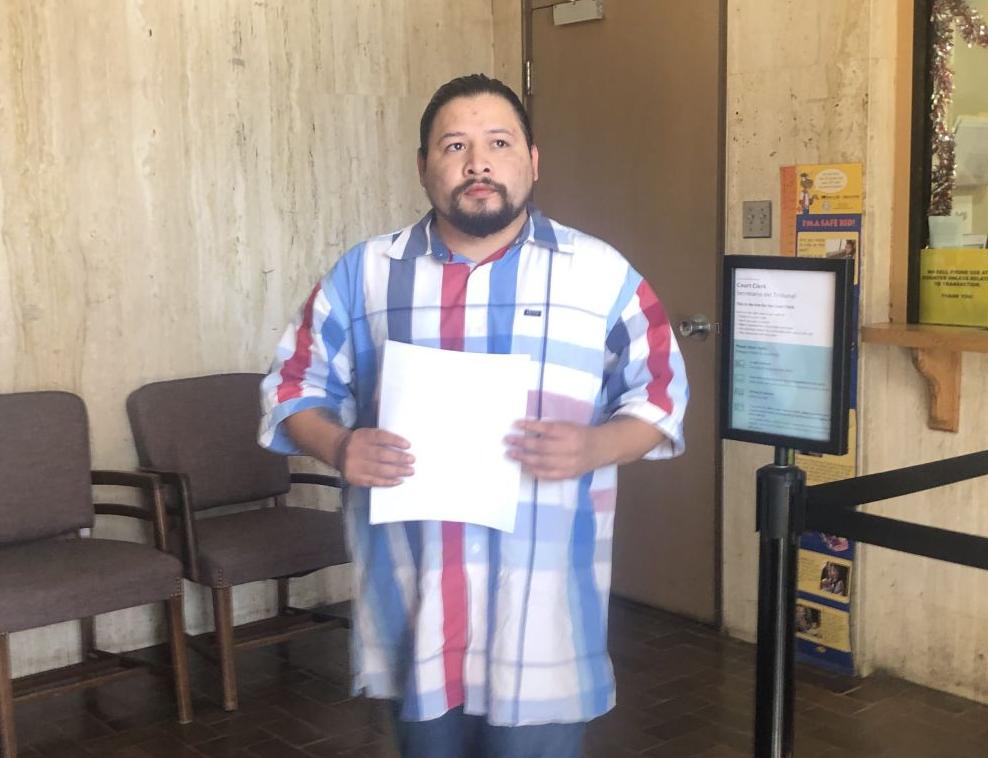 Mark Anthony Gonzales, a 29-year-old Victoria resident, leaves Victoria Municipal Court after attending a dangerous dog hearing where a judge ruled both of his dogs be euthanized. Gonzales did not contest the hearing and agreed with the judge's ruling. 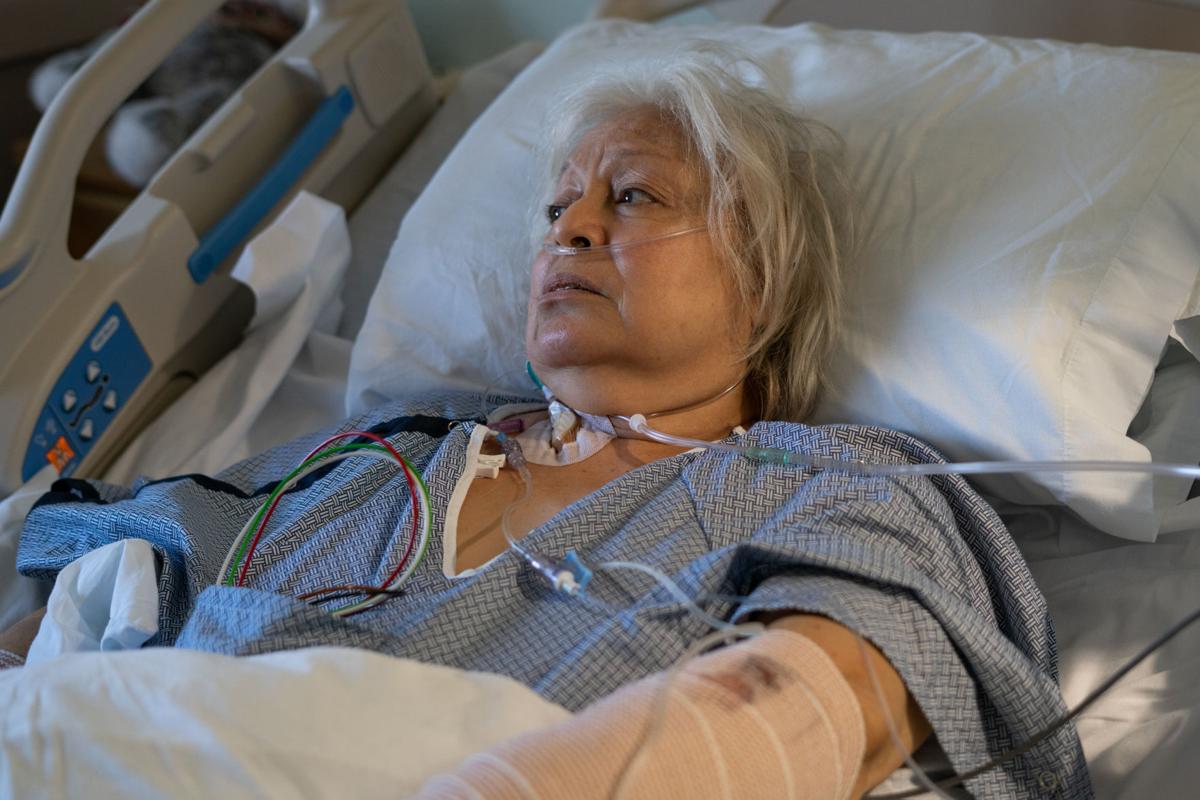 Blanca Vasquez, who was photographed days after her attack, is still recovering from injuries suffered in a Nov. 23 dog attack. A municipal judge Friday ordered the two dogs that attacked Vasquez to be euthanized.

Mark Anthony Gonzales, a 29-year-old Victoria resident, leaves Victoria Municipal Court after attending a dangerous dog hearing where a judge ruled both of his dogs be euthanized. Gonzales did not contest the hearing and agreed with the judge's ruling.

Blanca Vasquez, who was photographed days after her attack, is still recovering from injuries suffered in a Nov. 23 dog attack. A municipal judge Friday ordered the two dogs that attacked Vasquez to be euthanized.

A Victoria municipal judge Friday morning ordered two dogs be euthanized after she determined they had severely mauled a woman more than a week earlier.

Municipal Judge Vanessa Heinold handed down the decision after listening to evidence and testimony during a dangerous dog hearing held at the request of Victoria Animal Control.

One of the dogs owners, Mark Anthony Gonzales, 29, of Victoria, appeared before the judge but did not contest the proceedings.

“I agree they should be put down,” said Gonzales in court.

Should the dogs who attacked a Victoria woman in November be euthanized?

The two dogs ordered to be euthanized, Lorena and Mr. Big, both American bullies, were owned by Gonzales and his mother Cynthia Denise Salazar, 53, of Victoria, according to Municipal Prosecutor James Smith. During the hearing, Smith called several witnesses, including residents of a Victoria neighborhood who said they had witnessed the dogs savagely mauling Victoria resident Blanca Vasquez, 66.

After the hearing, Gonzales claimed sole ownership of the dogs, saying they had never attacked anyone before.

Almost two weeks after the attacks, Vasquez, the most severely injured victim, remained hospitalized, unable to walk and stand on her own because of bite wounds so severe that they had exposed her muscle, tendons and tissues.

On Nov. 23, Rosa Garcia, 52, of Victoria, was sitting in her wheelchair outside her Robin Street home when she was approached by the dogs, which she thought at first were friendly, she said.

Garcia quickly realized the dogs were not friendly when they began attacking and biting her wheelchair, she said.

When Vasquez, who is Garcia’s neighbor, emerged from her home, the dogs lost interest in Garcia and set upon their new victim, she said.

Vasquez was far less lucky and was knocked to the ground where she was bitten on her arms, legs, feet and hands.

Photographs introduced into court of her wounds show deep, inch-wide wounds and skin torn to ribbons.

Finally, another neighbor, Herman Farias Jr., 62, heard Garcia’s cries to help Vasquez. After realizing what was happening, he drove to Vasquez’s nearby residence with a shovel to beat the dogs back.

During the hearing, Farias, who used a walking cane to enter the witness stand, testified that he arrived to find Vasquez lying on the ground, silent and unmoving as the dogs continually ripped at her limbs.

“She was done fighting,” Farias testified. “Ten minutes later, she would not have made it.”

Blood was “everywhere,” said Farias, adding Vasquez’s wounds looked like someone had attacked her with a butcher’s knife.

Both Garcia and Vasquez’s daughter, Kristina Sevier, 36, described Farias as a hero and credited him with saving the woman’s life.

The two dogs had left Salazar and Gonzales’ home through a hole in their fence and attacked Vasquez on her own property, testified Jose Hernandez, the animal control officer who was dispatched to the dogs’ attack.

After court, Gonzales said he was unaware of the hole.

Her voice shaking and filled with emotion, Sevier testified how not all the wounds suffered by her mother were physical.

“She is going to need major counseling,” an emotional Sevier said, adding, “Mom is not the same. She can’t sleep – has nightmares.”

Despite the violence of the attacks, Victoria dog advocate Megan Driver, who serves as director of the Victoria nonprofit Saving Animal Lives, said the responsibility for the violence lies solely on the shoulders of the dogs’ owners.

Not only are owners responsible for securing their dogs on leashes and behind fences, they must also socialize their pets to ensure the animals are not aggressive around people.

Aggression, she said, is not a behavior that is innate to dogs, rather it is a result of an owner’s actions.

“Just like a child, they learn their ways from whoever they are raised by,” she said.

In fact, Sevier said she personally cared for a pet dog that was a bully breed for 18 years of its life, describing it as sweetly tempered.

She also said she considered the two dogs to be euthanized as victims of the attack.

Gonzales disputed the claim that dogs become violent only because of their owners’ actions, saying his dogs had always been friendly and may have been provoked by stray dogs in the neighborhood on the day of the attack.

He also said that he never chained his dogs and had socialized with them often.

Gonzales said he was just as confused as to why the dogs had attacked that day.

“I myself don’t really know what happened,” he said.

He also pointed out that the court would never hear from the two potential witnesses who could explain exactly why the attacks occurred – the dogs themselves.

“My dogs can’t speak,” he said. “We can only hear from the victims.”

Before the Nov. 23 attack, Gonzales’ dogs had not received a dangerous dog designation, said Smith, adding that there was no evidence that the dogs had gotten out before.

Only owners of dogs already deemed dangerous by a court can be held criminally liable, Smith said.

“It sounds like those dogs haven’t ever done anything like that before,” he said, adding, “The dogs never attacked anyone before.”

Sevier said her family is nevertheless considering a lawsuit.

While Driver said accidents do happen and even responsible pet owners sometimes find their dogs running loose, she said owners ultimately bear the responsibility for what their pets do.

In Victoria and the county, she said, too many owners do not do enough to secure their dogs, and, as a result, dog attacks are more likely to happen.

Driver placed responsibility for solving that problem on local government leaders for failing to properly fund the community’s animal control center, which is able to open only five days out of the week.

She also said animal control officials should do more to educate community members about proper dog socializing and securing.

The daughter of the severely mauled woman agreed with that assessment, saying community leaders must act in the wake of her mother’s life-changing attack.

“Something can be done,” Servier said. “If there is a will, there is a way. We just need to find that way.”

The fate of two dogs that attacked a woman on Nov. 23 will be decided in a hearing at the Victoria City Municipal Court at 9:30 a.m. Friday.