In light of a new state law, Victoria County commissioners will discuss, for the first time, the creation of an ordinance that would regulate game rooms.

“Illegal game rooms and the rampant criminality that they attract are a big problem in Victoria County that needs to be addressed,” said County Judge Ben Zeller.

That discussion is scheduled for a public commissioners court meeting Monday and comes about a week after authorities executed search warrants at two Raisin game rooms where illegal gambling was suspected. Four people accused of operating the game rooms were arrested.

According to the Texas Penal Code, game rooms can pay “not more than 10 times the amount charged to play the game or device once or $5, whichever is less,” meaning prizes also must be valued less than $5.

Monday’s commissioners court meeting will mark the first public discussion by commissioners in considering the creation of an ordinance to regulate game rooms in Victoria County.

Although the Victoria City Council passed in 2015 its own ordinance regulating game rooms within city limits, the county has been forbidden from creating a similar law – until recently.

Although commissioners have begun working on a draft ordinance, they are still determining which regulations to apply and with what severity, Zeller said.

In designing their own ordinance, the county judge said commissioners will look to other jurisdictions where game room regulations have been implemented.

Zeller added he has spoken to Jefferson County District Attorney Bob Wortham, who has designed an ordinance to regulate game rooms that will likely to go into effect Jan. 1.

Wortham, a former U.S. Attorney for the Eastern District of Texas and former state district judge, said he began battling illegal gambling in Texas while serving under President Ronald Reagan.

After the city began requiring permits, the number of game rooms in Victoria fell to fewer than 10. Victoria police have raided game rooms at least once a year since 2015.

Wortham said the owners of illegal game rooms have proven time and again that they can skirt the law despite authorities’ best efforts.

“Oftentimes offenders go to great lengths to separate any provable ownership to their source locations and contraband, as they are aware that by doing so, law enforcement will have a difficult time proving them culpable to the criminal offenses committed,” the search warrants state.

Unlike Victoria’s current ordinance, the proposed law in Jefferson County carries a number of requirements aimed at creating a paper trail to assist authorities in tracking the businesses’ finances.

Jefferson County game rooms will be required to make all payments by check to a single bank under penalty of $10,000 fines and a Class A misdemeanor for owners. If a game room is suspected of illegal activity, Wortham said, the opportunity to examine financial records could prove vital to prosecutors. 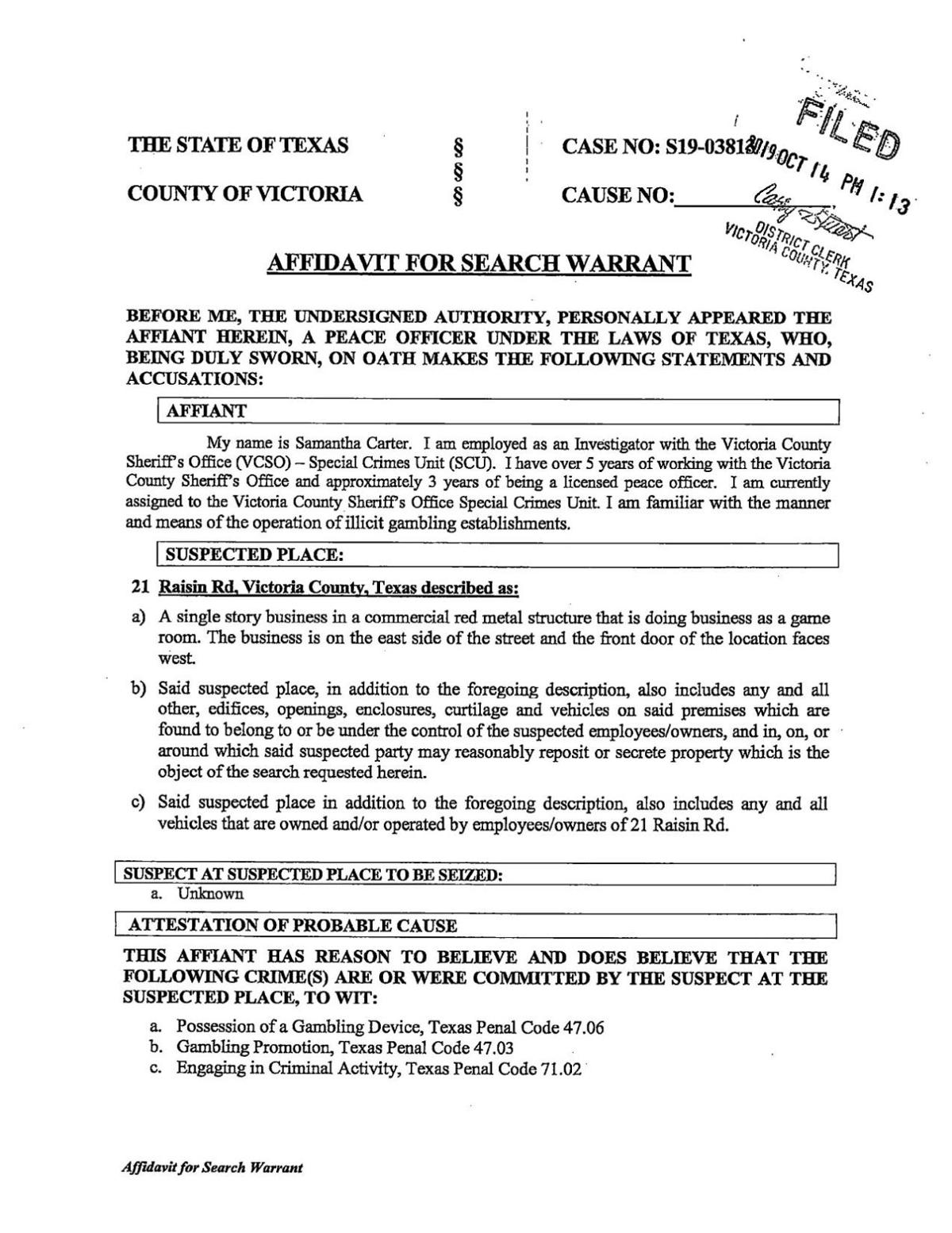 In building their case against the two raided Raisin game rooms, investigators relied on the use of confidential informants who had membership privileges at the businesses.

“(The confidential informant) advised a membership is required to enter and participate in gambling at the locations,” according to one search warrant. (The informant) had to provide a photo and obtain a key fob type item in order to scan entry into the location. The location was also not accepting new members.” 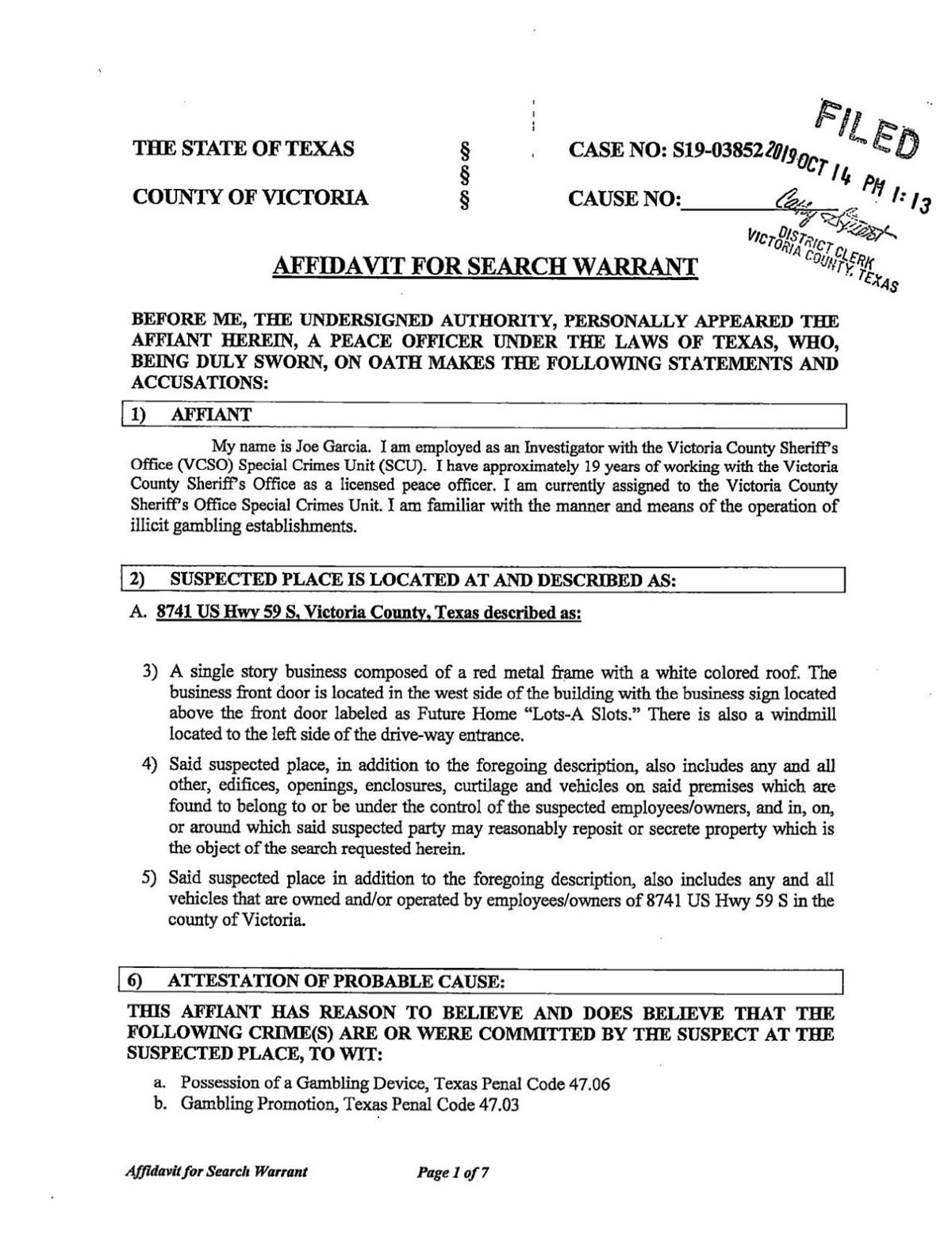 Although a customer participating in illegal gambling can be charged with a Class C misdemeanor, Wortham said prosecutors should focus on the employees and owners of illegal game rooms.

But prosecuting owners and employees of illegal game rooms can be difficult even with permits, Wortham said.

“As soon as they turn in a form, they change the employees,” he said.

When called by the Advocate, numerous people listed as owners on Victoria game room permits said they had no connection to the game room in question.

To prevent false reporting of owners and employees, Wortham’s ordinance requires game rooms to keep regularly updated ledgers listing each and every owner and employee. Those working at the game room are required to display their names and titles on badges, and failing to do so can result in $10,000 fines.

Zeller said he and commissioners are still working to determine the features of any ordinance they might develop.

“It appears game rooms can be run out of town if that’s the goal,” he said. “I’m interested in hearing from the community and law enforcement as to what the goal should be.”