Siblings say accusations that their mother killed their father are tearing their family apart.

“She is no longer my mother. She is dead to me,” said Jaime Lee Garcia, a 34-year-old Odessa resident, after learning his mother had been bonded out of jail, adding he thought she should stay incarcerated for the rest of her life.

“I’m going to stand by my mother until the day I die,” said Amanda Stewart, Garcia’s 33-year-old sister, who lives in Cadiz, Ky.

The siblings’ mother, Rose Marie Garcia, 56, was arrested June 20, the same day her husband, Mario Garcia Sr., 59, was found dead in a wooded ravine behind their home at 1053 Beck Road West.

Arrested on a warrant charging her with murder, Garcia was booked into the Victoria County Jail in lieu of a $250,000 bond.

She was released Tuesday in lieu of a $100,000 bond, said her appointed attorney, Keith Weiser.

"As anyone accused of an offense, she is presumed innocent," Weiser said. "Bail is used to secure a person's appearance in court. It is not to be used as punishment or an instrument of oppression."

She was released from the jail Tuesday, according to the Victoria County District Clerk’s Office. She has yet to be indicted.

Garcia said his mother killed his father after the man revealed he no longer loved her after 40 years of marriage. They had six children together and many grandchildren.

“I have no sympathy for her whatsoever,” he said. “The day she shot my dad was the day she died in my heart.”

But Stewart disagreed with her brother’s assessment of her parents’ relationship.

“My daddy loved her,” she said.

Garcia said he found his father’s body after deputies failed to locate him for days. That was in part, he said, because his mother had concealed his father’s remains.

According to a search warrant affidavit for the Beck Road home, Rose Marie Garcia “shot the victim in the head with the 4-10 single-shot shotgun inside of the residence and cleaned the crime scene.”

The document also states investigators discovered facts indicating the crime scene had been cleaned. That information was revealed by the suspect.

“The firearm was placed just inside of the shed’s door, hidden in a crack in the floor,” states the affidavit. “This information was gained through the interview of (Rose Marie Garcia).”

Garcia said his mother should not have been released on bond because she is likely to flee and poses a danger to his family.

But Stewart said her brother was wrong.

She said her mother was unlikely to flee or harm others.

For those reasons, she said, her mother should be released from jail on bond as investigators and attorneys continue their work.

“We don’t know what happened yet,” she said. 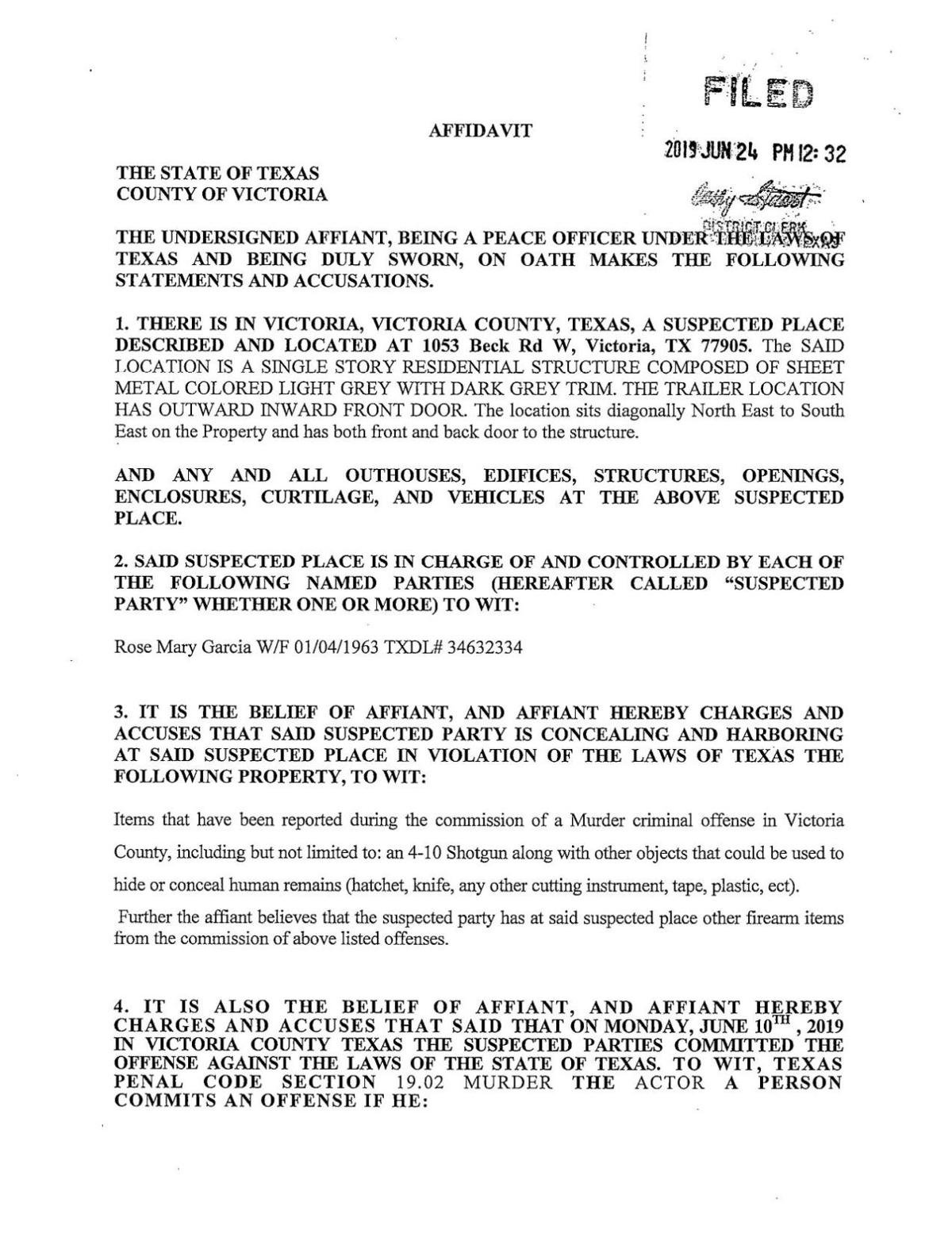 This story was updated Aug. 20 to correct the date that Rose Marie Garcia was arrested.

‘He didn’t deserve this,’ says daughter of homicide victim

Who are you voting for in the tax assessor-collector Republican runoff?