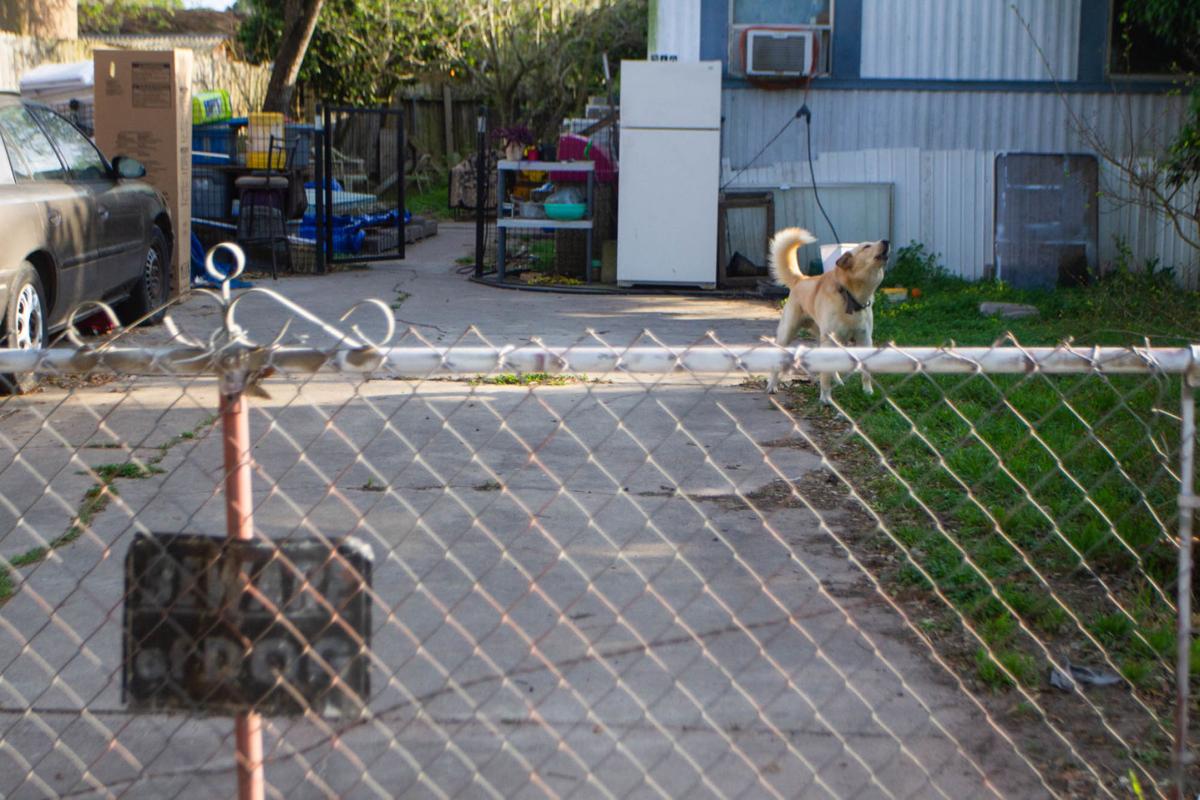 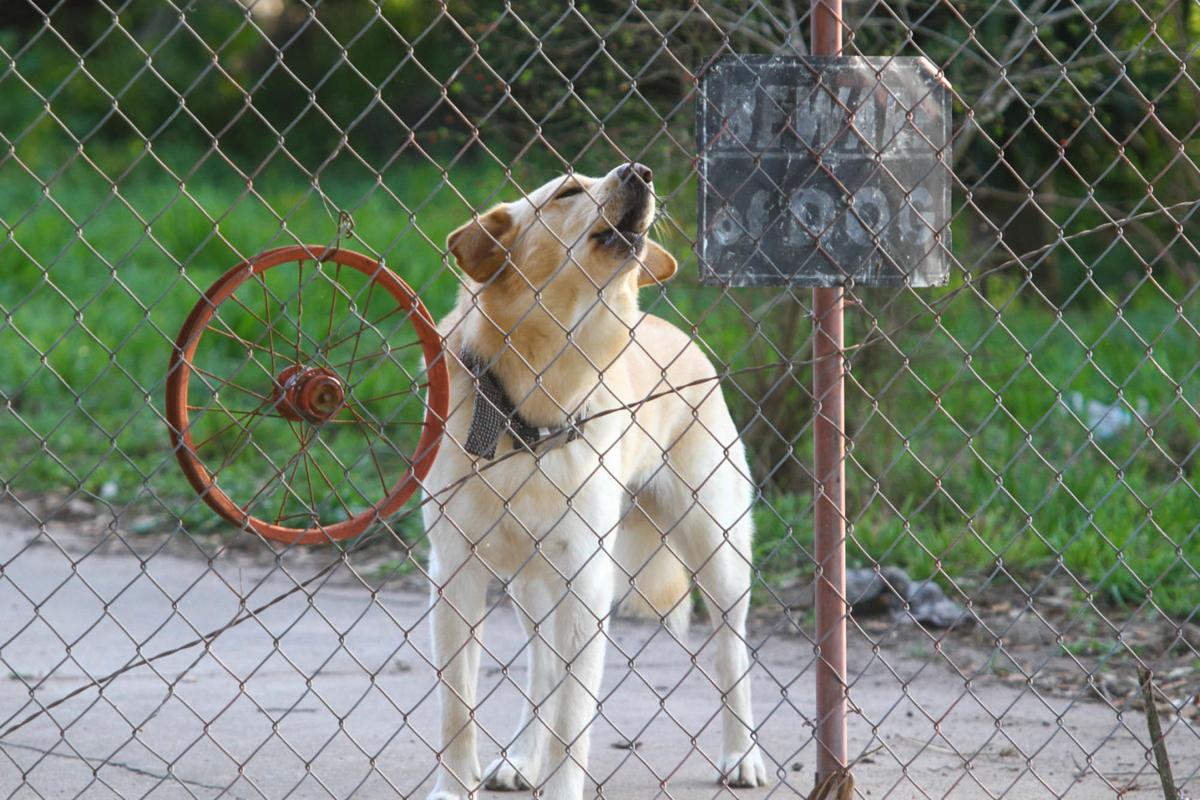 Residents of a north Victoria neighborhood say Rocky, their neighbor's dog, has frequently chased and tried to attack people. His owner has received two tickets for the behavior. 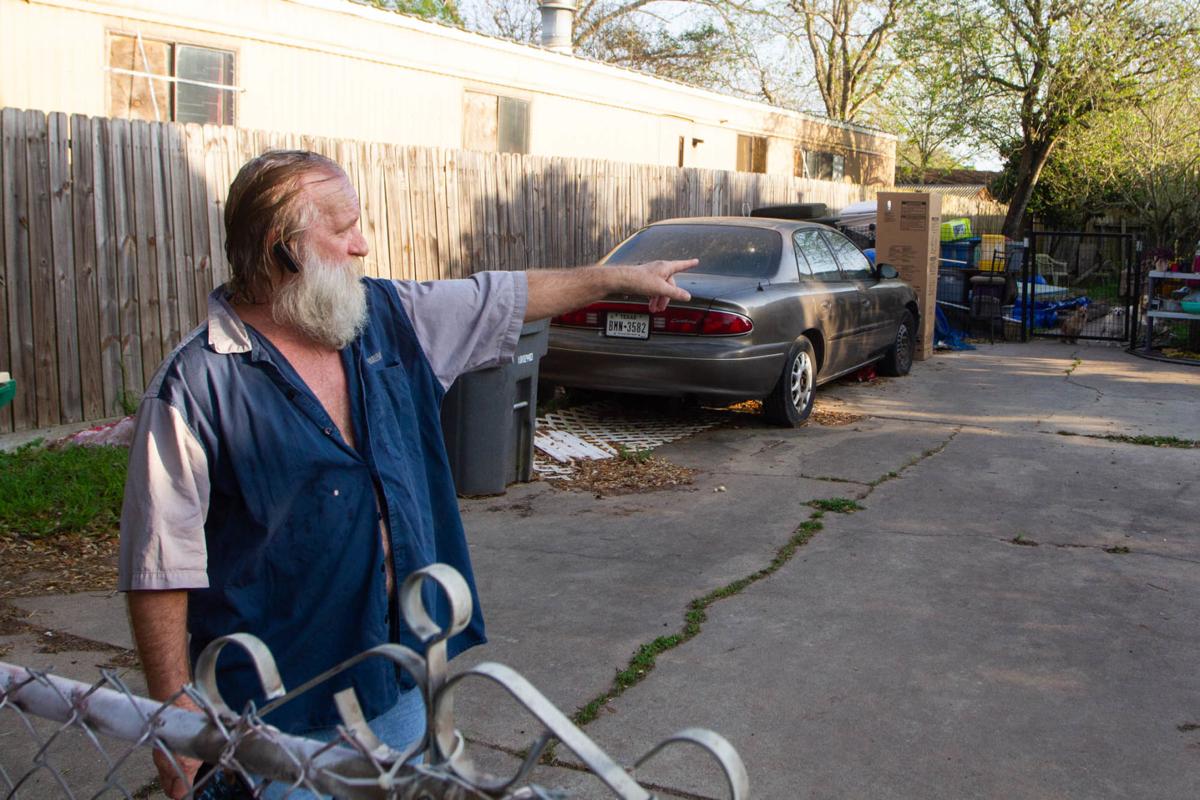 Terry Walker, 58, who owns Rocky, points to a fixed fence on his property to keep the dog from escaping.

Residents of a north Victoria neighborhood say Rocky, their neighbor's dog, has frequently chased and tried to attack people. His owner has received two tickets for the behavior.

Terry Walker, 58, who owns Rocky, points to a fixed fence on his property to keep the dog from escaping.

On an evening bike ride near her home, a Victoria mother suddenly found herself wielding a pocketknife in defense of her life and 1-year-old son.

“The dog came flying at me,” said Brandi Brand, 34, of the late-February attack.

The repeated trouble with the dog, Brand and her neighbors said, is proof that Victoria animal control ordinances lack teeth for addressing loose dogs and other bad behavior by pet owners. Within months, public health officials hope to present to city council members a revised ordinance addressing that issue and others.

Luckily, Brand didn’t have to use the knife. Instead, her own dog, a large Catahoula, lunged to protect the mother and her child, fighting off the aggressor had until it backed away.

“I was shaking violently. I’m so thankful JD was here to protect us,” Brand wrote later in a Facebook post, adding, “I love this dog for showing me his loyalty. Now I feel like the worst person in the world because here I am this morning getting (him neutered) after he just risked his life to save us.”

But Brand contends it wasn’t the first time she and her family had been attacked by their neighbor’s dog.

Weeks before Brand wielded the knife, her 14-year-old daughter had come home in tears, saying the neighbor’s dog had chased her from the bus stop, forcing the girl to scale and hide behind a fence. About that time, Brand also began driving her 15-year-old daughter to the school bus stop after she too said she had been menaced by the dog, prompting Brand to ask school district officials if her daughters could carry pepper spray or a knife to the stop for protection.

They said the girls could not.

The dog’s owner, Terry Walker, 58, refuted allegations that his dog was dangerous, claiming accounts of attacks by Brand and other residents were lies.

Many of Brand’s neighbors on Blyth Road and Shannon Drive said they, too, had been charged by the dog while talking in their driveways or mowing the lawn or just minding their own business outside.

“I don’t want our (children) to go outside and play because we have been worried about this,” said neighbor and mother Jessica Garza, 28.

“You never know when he’s going to be out there. We’re fed up, frustrated – the whole neighborhood is,” said another neighbor, Wynne Manning, 61.

City ordinances prohibit an owner from failing to control a menacing dog that chases passing people, vehicles and other animals. It’s also illegal to have a dog outside without a leash. Failing to do either can land owners with misdemeanor tickets.

After an owner is cited twice for such offenses, the Victoria municipal court may hold a hearing to determine whether the dog is a public nuisance. And if the court determines the dog is a nuisance, it must be removed from city limits permanently, be euthanized or in some cases be “debarked” or have its vocal cords removed.

Chief Animal Control Officer Craig Kirkpatrick said he didn’t expect the dog on Blyth Road to get out again after its owner fixed a hole in the fence, and no nuisance hearing was ever held although neighbors said they wanted one.

Walker said he had been ticketed three times but also said his dog, Rocky, hadn’t gotten loose since the last ticket.

Neighbors confirmed that claim but also said they wouldn’t be surprised if it happened again.

But neighbors also wondered why it had taken more than a month to fix the fence and address the problem. Brand said she had called animal control twice before the evening bicycle incident and made the first call as early as January. Brand said she was told nothing could be done unless her children were bitten or authorities witnessed the dog loose.

“It shouldn’t take them getting bit. That is ridiculous,” said Brand, adding that in defense of Rocky, many other dogs run loose through the neighborhood from tiny terriers to a more sizeable German shepherd puppy seen as of late.

And when animal control did arrive, it was often too late.

“He kept getting the dog back in the fence by the time animal control showed up,” she said.

Although Kirkpatrick said photographing or videoing a dog or its owner acting badly can assist in building a case, Brand said she did just that but never saw any results.

“We’re not condemning the system, but we need to find a faster way of handling things,” Manning said.

Delilah Perez, interim director of the Victoria County Public Health Department, said help is on the way with a new animal control ordinance months from being presented to council members for approval. That ordinance was spearheaded by Derrick Neal, the former director.

Although Perez said she couldn’t talk about details in the new law, she said it should provide stricter penalties.

The current law, she said, does not offer authorities the means to go after owners who allow their dogs to get loose over and over again.

Making Victoria safer, Brand said, should begin with penalties that correct the behavior of pet owners who have repeatedly demonstrated an inability to follow the rules.

She said her neighbor was one such person.

“Two citations should be enough. Three should be automatic confiscation,” she said. “You have no business with an animal at that point.”

How to report a bad dog or its owner

Animal Control officers are available from 8 a.m. to 5 p.m.  Monday through Thursday and from 8 a.m. to 3 p.m. Friday. After hours, on weekends and holidays, please call the Victoria Police Department at 361-573-3221 for city complaints and the Victoria County Sheriff's Office at 361-574-8040.

Should the city’s leash law be stricter?

CUERO – Rescued dogs have always depended on the kindness of strangers, and the 18 pups donated by their overwhelmed owner to a Cuero adoption…

I just have one question.....did the dog actually attack anyone or did he just bark? Of course getting out of the yard is a problem and absolutely should be addressed.....but was the dog truly dangerous or just a barker? That is not clear in the story.

David
Not clear in the story?! What's not clear about the following: ""The dog came flying at me,” said Brandi Brand, 34, of the late-February attack.", "...saying the neighbor’s dog had chased her from the bus stop, forcing the girl to scale and hide behind a fence.", "her own dog, a large Catahoula, lunged to protect the mother and her child, fighting off the aggressor had until it backed away.", "Drive said they, too, had been charged by the dog while talking in their driveways or mowing the lawn or just minding their own business outside."?

No one has reported the dog actually biting them, but many people in the neighborhood think the dog is nevertheless dangerous.