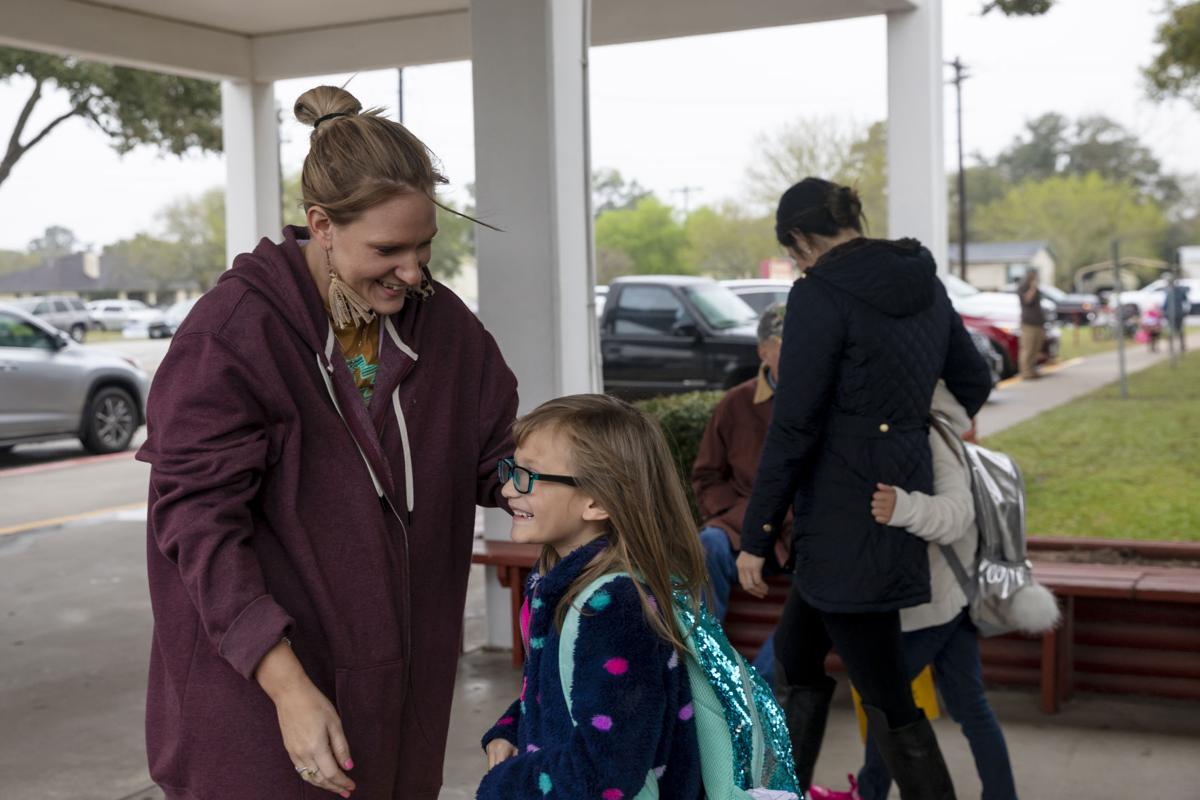 Lisa Villarreal greets her daughter Sadie after school at Vickers Elementary School. Lisa moved near the school with her family so her children could attend the elementary school that she also attended. 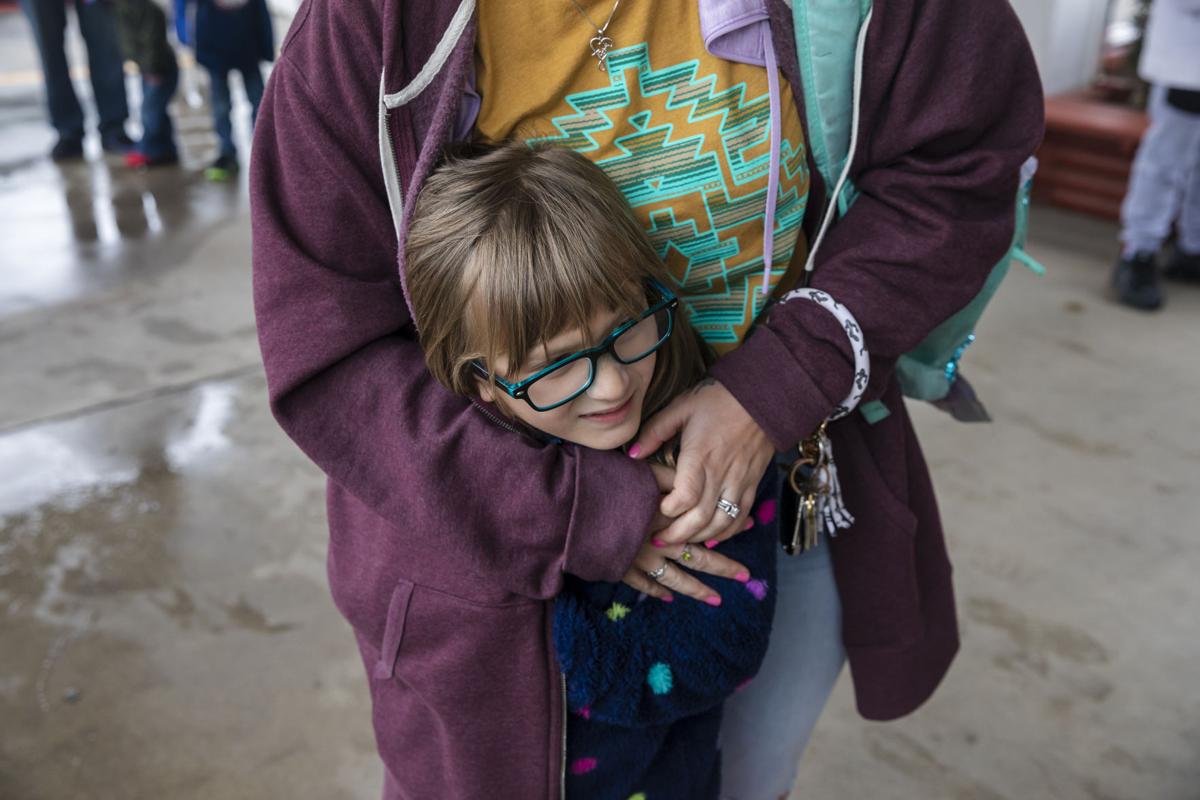 Lisa Villarreal hugs her daughter, Sadie, to keep her warm at Vickers Elementary School. “They already established their friends,” Villarreal said about the effects a proposed attendance boundary change would have. “It would be hard on them.” Villarreal said she also understands the proposed changes may be necessary as the north part of town continues to grow. 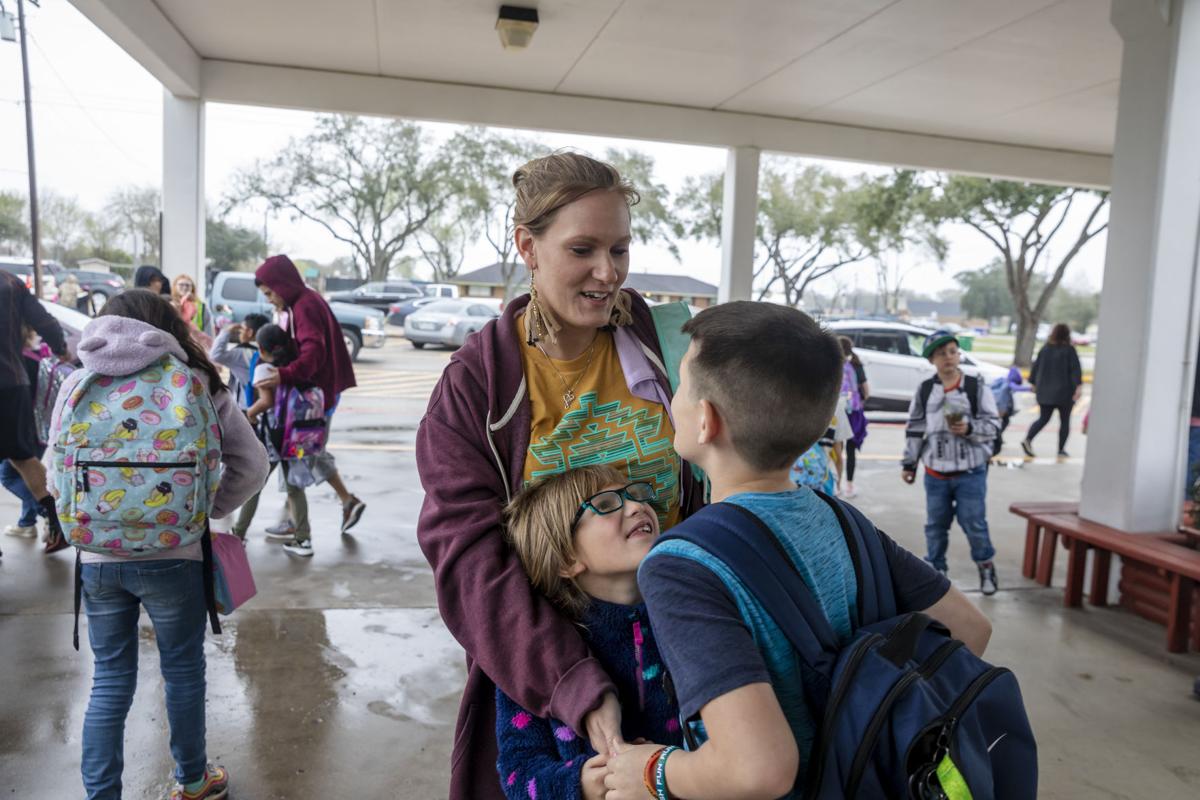 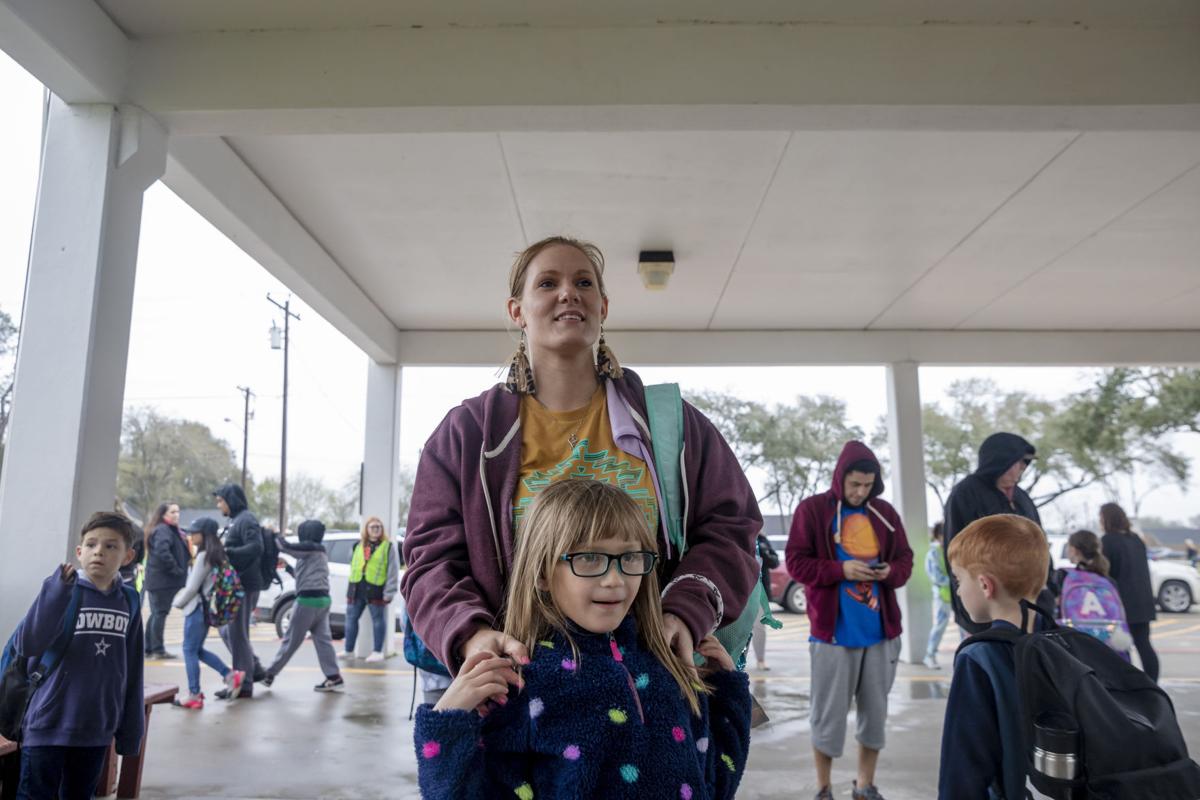 Lisa Villarreal waits with her daughter, Sadie, for her son to come out after school at Vickers Elementary School.

Lisa Villarreal greets her daughter Sadie after school at Vickers Elementary School. Lisa moved near the school with her family so her children could attend the elementary school that she also attended.

Lisa Villarreal hugs her daughter, Sadie, to keep her warm at Vickers Elementary School. “They already established their friends,” Villarreal said about the effects a proposed attendance boundary change would have. “It would be hard on them.” Villarreal said she also understands the proposed changes may be necessary as the north part of town continues to grow.

Lisa Villarreal waits with her daughter, Sadie, for her son to come out after school at Vickers Elementary School.

“There is a choice to be made,” Shepherd said Tuesday at one of the forums.

Victoria school officials outlined the proposed attendance boundary changes during the forums Tuesday and Wednesday. The changes include moving attendance zones southward at the elementary level and changing some of the feeder patterns from elementary to middle school.

Greg Bonewald, with Victoria ISD, discusses proposed changes to the attendance zones and the feeder pattern from elementary to middle school pic.twitter.com/80LYSqDdjV

Shepherd said if there is enough community outcry for a bond proposal, which could expand Schorlemmer and Vickers elementary schools or build a new campus, then administrators will “press the pause button” on attendance boundary discussions.

“The nature of the conversation will change,” Shepherd said.

Shepherd explained that there is a Bond Planning Task Force that is focused on a bond development, and he anticipates preparation for a bond in the “not too distant future.”

The community should think about it, he said. Redrawing attendance lines would alleviate the overcrowding in several northwest elementary campuses and Cade Middle School sooner than a bond proposal could. It would also fill schools that are below capacity in the southeast part of Victoria.

Gregory Bonewald, deputy superintendent of operations, presented another proposal to the public, which will also be given to the board along with the recommended attendance boundaries. The proposal is a grandfather clause, and it would allow current fourth- and seventh-graders to stay at their current campus along with any of their siblings at the same campus.

Another proposed clause would allow former F.W. Gross students who moved to Aloe Elementary School to decide to attend Hopkins, if rezoned for that campus or stay at Aloe.

The two proposed clauses and the attendance lines will be presented to the school board for a decision during a special meeting Feb. 25.

An online thought exchange site was set up for both the redrawing of attendance boundaries, which already has accumulated hundreds of comments since opening Friday, and a new thought exchange that opened Tuesday night for comment about a possible bond proposal.

Some of the early responses, which were anonymous and limited to the site, stated: “Rezoning is no additional cost to the taxpayer, while bond is long-term debt when the district as a whole has capacity for the current enrollment,” and “Do it. This is a no-brainer.”

Vickers parent Lisa Villarreal did not know about the proposed attendance zone changes, but she thinks it’s necessary with the overcrowding at the elementary school.

She hates the idea of students leaving the campus, but she understands why it needs to happen. Her daughter and son have attended Vickers their entire education career, and Villarreal even attended the campus as a child.

“I want them to get the same experience I had,” she said. “I would be sad if we had to go to another school.”

Villarreal said her family will not be affected by the zoning change, but it is still upsetting.

“I know they have to do it, but it would be sad,” she said. “Many of us move here for the school.”

About 100 people attended Tuesday’s public forum. There was no public comment or question portion of the meeting outside the thought exchange, and conversations with parents were limited to one-on-one with administrators.

Among those attending were Lisa Padilla and her 8-year-old son, Michael Velez. Michael is a second-grader at Vickers Elementary School, and he will change schools in the fall, if the board passes the proposed attendance lines.

“It’s my favorite school even though it’s my only school,” Michael said. He has attended Vickers since he was a kindergartner. “I don’t want to move. I have way too many friends at Vickers.”

Michael said he worries that if he changes schools, he won’t see his friends again.

Padilla said the family lives on Paco Road, which is the boundary street moving Michael from Vickers to Schorlemmer. The family bought the house because it was in the Vickers attendance zone.

She said she doesn’t care what the district has to do, but she wants Michael to stay at his current campus. She was told during the forum that she could request a transfer, but that would depend on class size at the time of the request, she said.

Michael currently comes home happy every day, but the family has been heartbroken since learning about the possible attendance zone changes, Padilla said.

“It breaks my heart. He really bonded with his friends,” she said. “It’s like a family. It’s more than a school.”

Under the grandfather clause, many students could stay at their home campus, if approved by the board. About 158 students are eligible for the clause leaving 446 students susceptible to change under the proposed attendance lines.

Five elementary schools will not be affected by the proposed boundary changes.

Stroman and Howell middle schools and Victoria East and Victoria West high schools will not be affected by the proposed changes.

About 550 Victoria students will change campuses with proposed zoning changes next school year.

As I recall, the defeat of the last bond issue resulted in the superintendent and others lamenting that they either failed to educate the community enough or that the community didn’t understand the need. Well, school officials, I have a message for you. The community did indeed understand and told you “no.” I suspect they will do so again just on the basis that you’re trying to hold kids hostage over the attendance boundaries.

Among the education community, VISD isn’t considered a very good school system. Maybe you all should focus on hiring better personnel, including management, and getting test scores up. I’ve witnessed many a school with lousy facilities but well-educated kids. Focus on substance, not appearance.

Holding kids as ransom! Nice. Pass a bond or these children will be moved. Classy

As much as I agree that VISD has been far from the best stewards of children's education, what other options are there? Either redraw the attendance lines, or build more schools. I think the only realistic option is redraw attendance and let some be grandfathered in.

The ole bait and switch tactic.