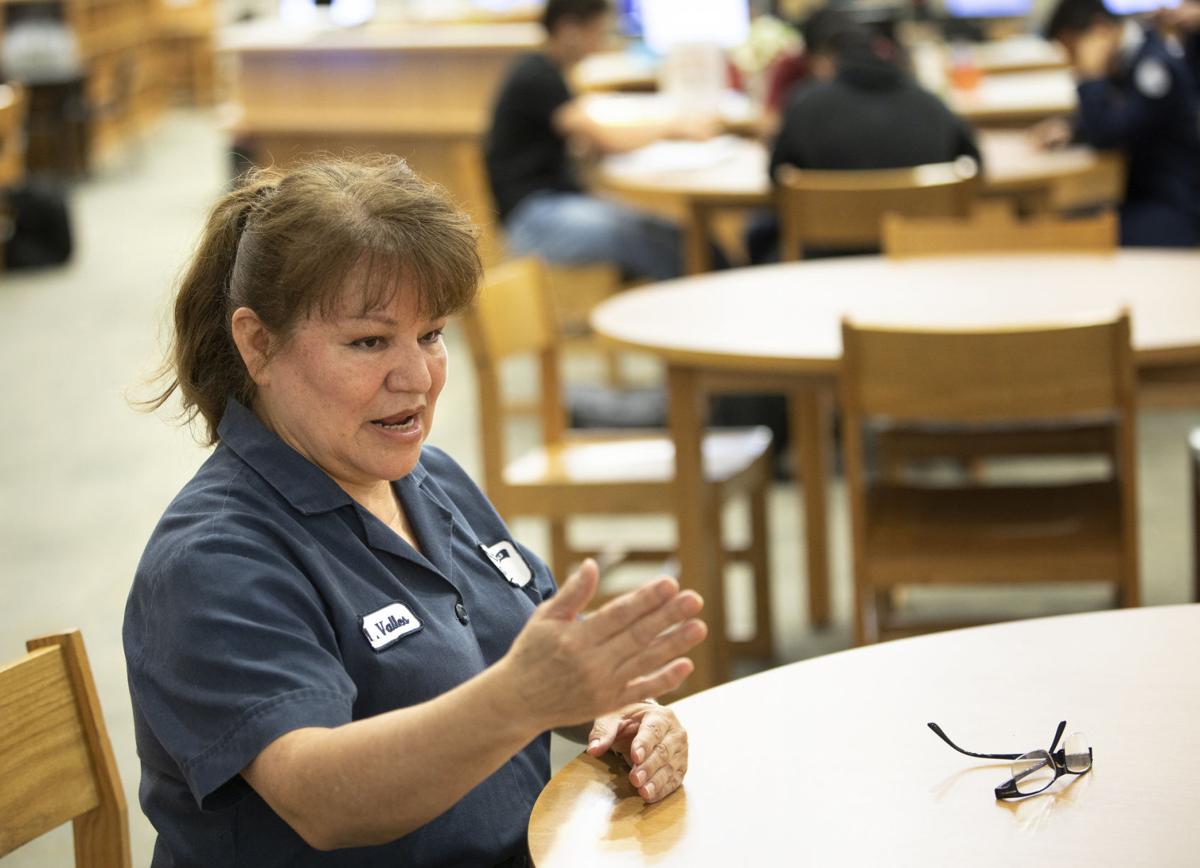 Yrma Mansilla, 60, talks about the process of becoming a United States citizen. Mansilla came to the U.S. 10 years ago to visit her daughter and after six months she decided to make this her home. 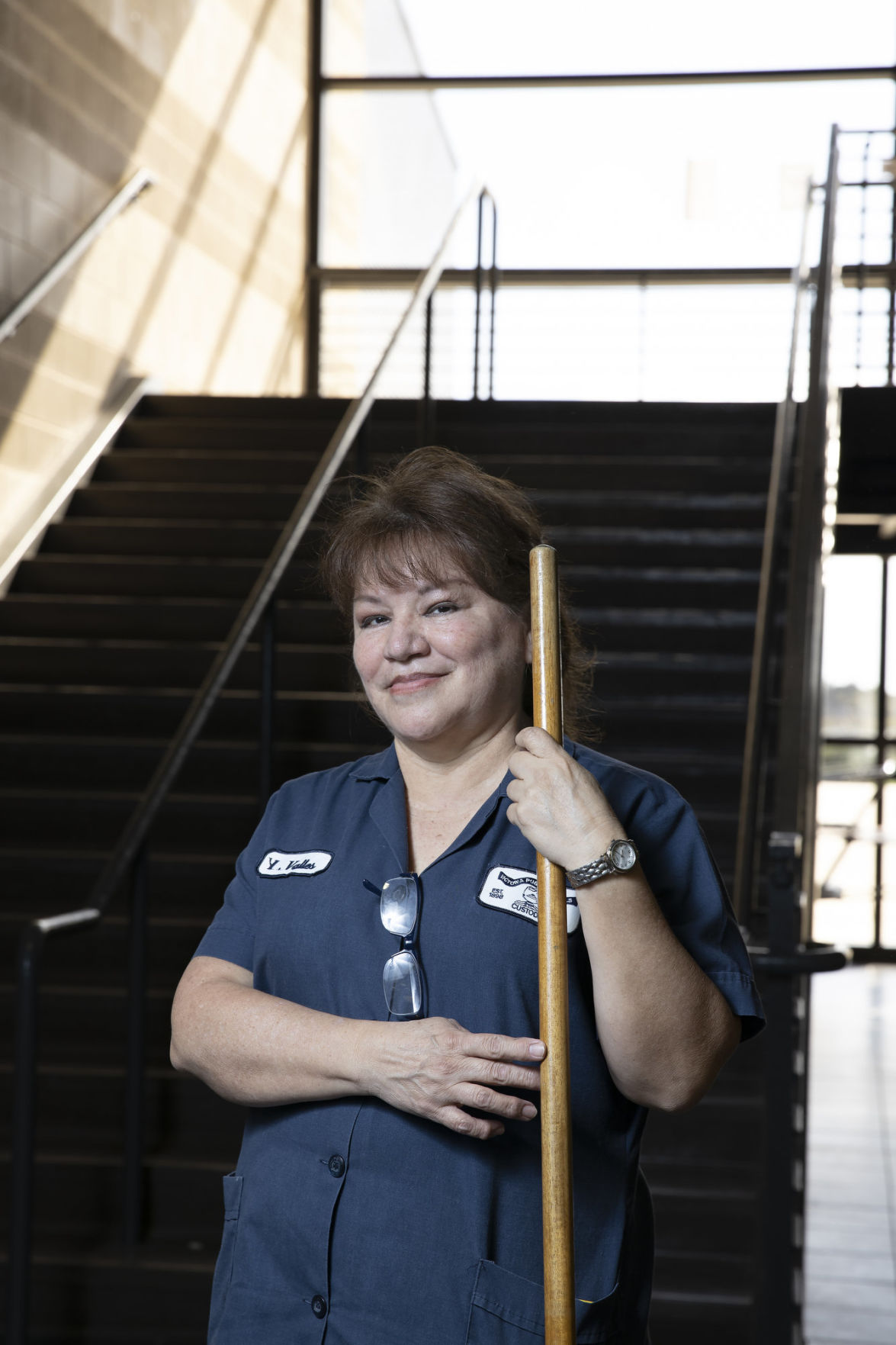 Yrma Mansilla, 60, talks about the process of becoming a United States citizen. Mansilla came to the U.S. 10 years ago to visit her daughter and after six months she decided to make this her home.

Yrma Mansilla arrived in the U.S. 10 years ago.

“I feel so,” she said trailing off and covering her smile. Tears welled in her eyes.

Mansilla works at Victoria East High School as a custodian, and she has worked there for four years. She primarily cleans the classrooms, but she helps wherever she is needed at the school, which educates about 1,900 students. She said she loves working at East and proudly wears her navy uniform with her thick brown hair tied back out of her face.

It took almost two years for Mansilla to complete the citizenship process, and she said it was well worth the wait.

Becoming a U.S. citizen is a 10-step process, according to the U.S. Citizenship and Immigration Services. The process includes an application, interviews and fees. Mansilla said she spent $600-$800 on the application process.

Mansilla took out a loan to cover her application fees.

She moved to the U.S. from Peru about 10 years ago to be near her daughter, who is one of four children. Mansilla’s other three children still live in Peru.

Yrma Mansilla discusses her children and what brought her to the US 10 years ago. pic.twitter.com/gUvj2uwbf7

“At first, I thought it was just a visit, and I saw how happy my daughter was and decided to try a year,” she said about living in the U.S.

When she first moved to the area, Mansilla got a temporary work visa and lived with her daughter near Edna where her son-in-law owned a ranch.

She said it has been great living in the U.S., but she worries about her little knowledge of English. She learned how to read and write in English while living in Peru, but she struggled with speaking and understanding the language when spoken. She said she spends many nights studying the language and takes English classes at night.

Youtube has also been helpful in learning English, Mansilla said.

“That helped me a lot to get my citizenship,” she said.

Mansilla said when she applied she got a book to use for studying, which she used for six months before doing her interview.

“I was a little tense during that time,” she said. “After they told me I passed, I relaxed.”

She said the experience was surreal, and she can’t believe she is a naturalized citizen.

She remembers fondly the moment she walked out of her interview. Her husband was waiting for her. He put a thumbs up as a question, and she proudly held one up in return. It was a happy and emotional moment she said she won’t forget.

Now that she has her citizenship, her husband of nearly 40 years wants to follow her lead and become a citizen, too, Mansilla said. He lives in the U.S. with Mansilla and remains in the U.S. through a work visa.

Mansilla said they decided to move to the U.S. permanently after the bank where her husband worked closed.

Victoria East teacher David Clemons, who has known Mansilla for several years, said they have become friends despite the language barrier.

When she comes in to clean his classroom, they typically strike up a conversation. One day she told him she became a citizen.

“I wanted to do something special for her,” Clemons said of hearing the news.

He gave Mansilla a cake to commemorate the achievement.

“She did it the right way,” Clemons, who teaches government, said. “I wanted to do something to recognize that.”

He said her path to citizenship offers a great example and teaching moment for the students at East.

“It teaches them that people all over the world place high value on becoming an American citizen,” Clemons said. “A lot of things worth doing isn’t supposed to be easy.”

Mansilla said she wants other people like her to know they, too, can become citizens. If she can do it, so can they, she said.

When she first started the process, someone told her it would never happen so she pushed harder.

She advised not to listen to those people and to bound past on the path to U.S. citizenship because it’s worth it.

Step 1: Determine if you are already a U.S. citizen. You are a U.S. citizen if you were born in the country or derive citizenship from your parents.

Step 2: Determine if you are eligible to become a U.S. citizen. Immigration Services provides a worksheet to determine if a person is eligible. For instance, a person must be considered a permanent resident and have lived in the U.S. for at least three years.

Step 3: Prepare your Form N-400 application for naturalization. The necessary documents must be collected to demonstrate eligibility such as a photocopy of your permanent resident card and check or money order for the application fees.

Step 6: Complete the interview. This occurs once the preliminary processes are complete.

Step 7: Receive a decision from the USCIS on your Form N-400 application for naturalization. The application can either be granted, continued which means additional information is needed, or denied.

Step 8: Receive notice to take the Oath of Allegiance. The oath may be taken on the same day as the interview or at a later date.

Step 9: Take the Oath of Allegiance. You are not a U.S. citizen until the oath is taken at the naturalization ceremony.

Step 10: Understanding U.S. citizenship. Immigration services provides a list of some rights and responsibilities that citizens hold including the freedom of expression, worship and the right to vote.

Thank you for doing it legally, the right way. And congratulations on becoming a citizen of the great USA.

How often do you read a book?