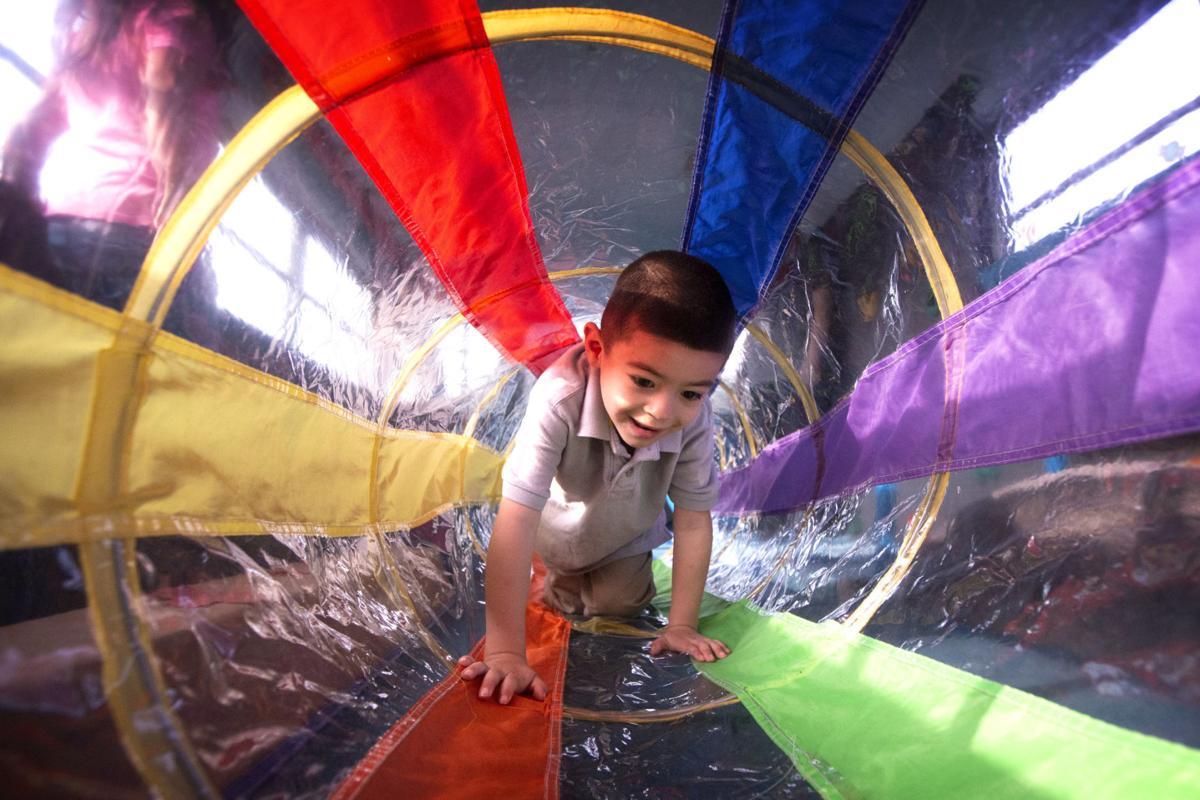 Hopkins Elementary School student Jonalan “JJ” Newkirk, 4, who is part of the preschool programs for children with disabilities, crawls through a tube during a sensory-development session inside Victoria school district’s new Mobile Sensory Motor Unit. The bus serves preschool programs for children with disabilities and prekindergarten students. The district purchased the vehicle and hired an operator through a $1 million grant from the Texas Education Agency. 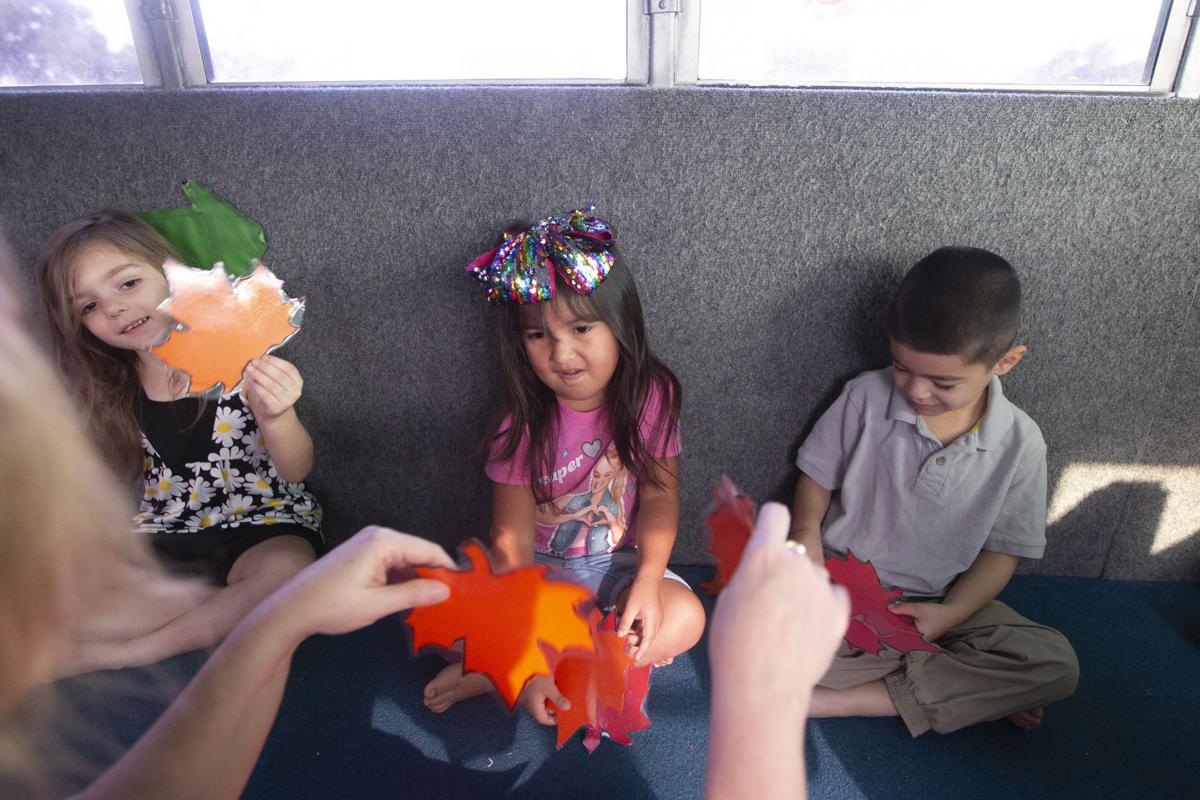 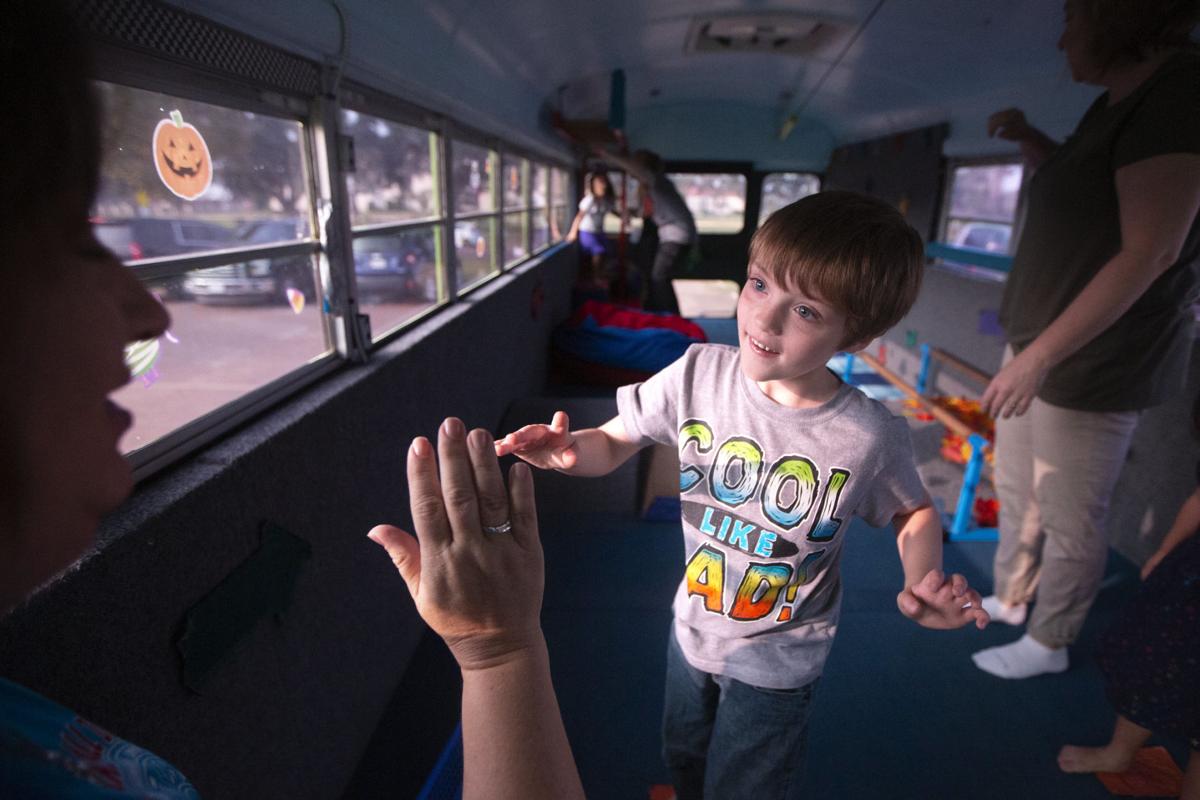 Hopkins Elementary student Kyle Graf, who is part of the preschool programs for children with disabilities, high-fives Dana Curtis during a sensory-development session inside VISD’s new Mobile Sensory 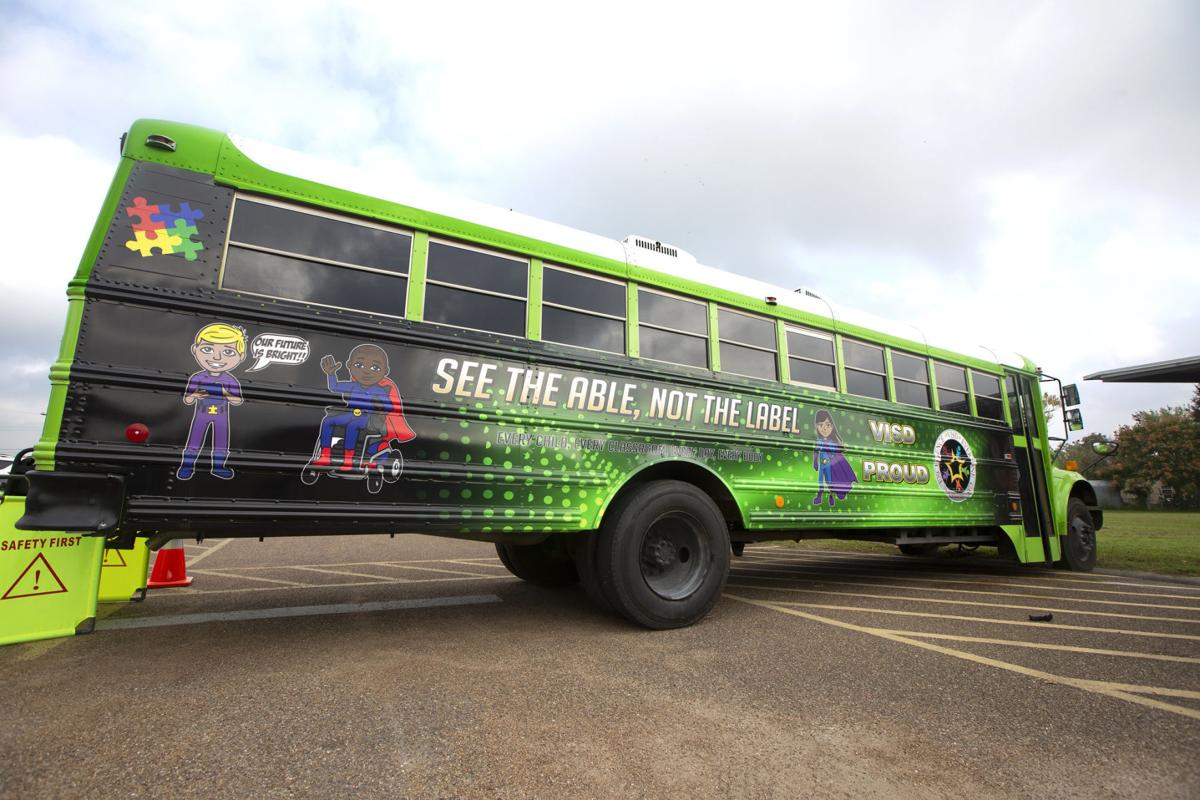 VISD has converted a school bus into a Mobile Sensory Motor Unit. The bus serves preschool programs for children with disabilities and prekindergarten students. The district purchased the vehicle and hired an operator through a $1 million grant from the Texas Education Agency. The bus will visit six of the 18 VISD elementary campuses to help their students. 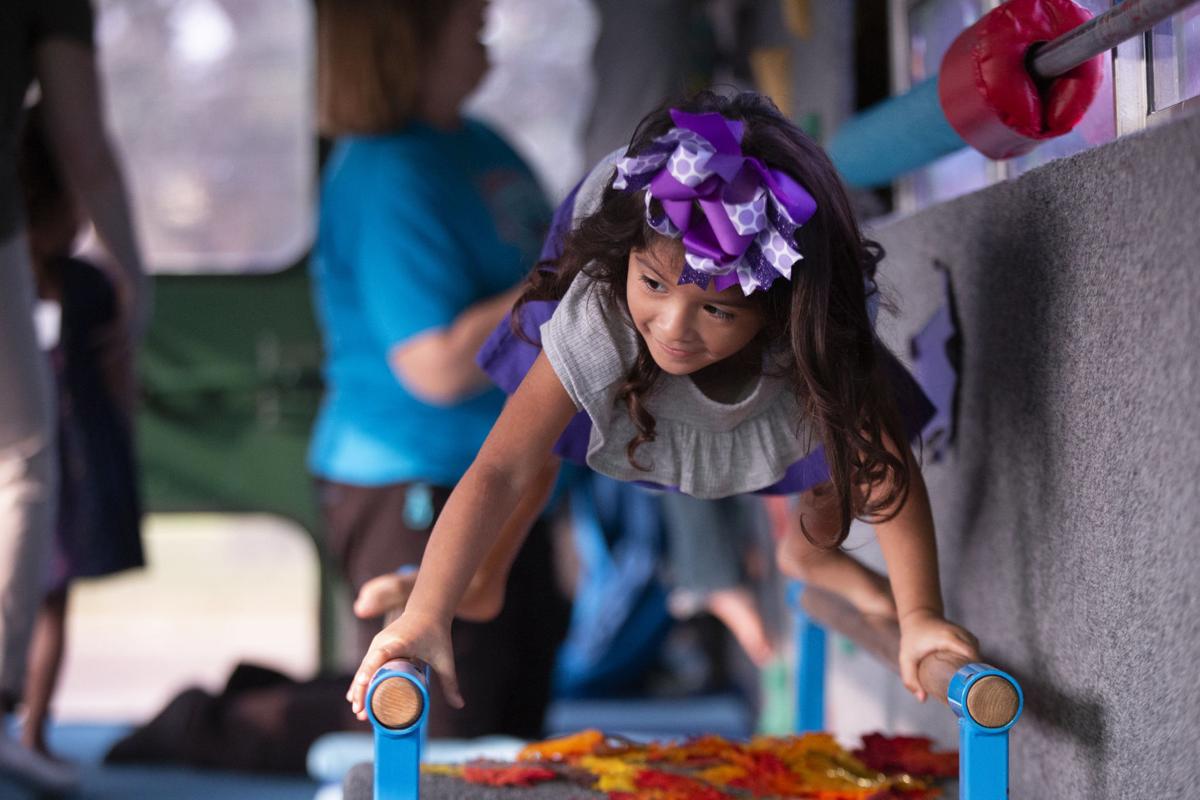 Hopkins Elementary School student Jonalan “JJ” Newkirk, 4, who is part of the preschool programs for children with disabilities, crawls through a tube during a sensory-development session inside Victoria school district’s new Mobile Sensory Motor Unit. The bus serves preschool programs for children with disabilities and prekindergarten students. The district purchased the vehicle and hired an operator through a $1 million grant from the Texas Education Agency.

Hopkins elementary student Jonalan “JJ” Newkirk made his way across the monkey bars and landed on a cushioned landing pad.

Instead of a park or playground, the monkey bars were one piece of equipment inside a school bus.

“I think it’s opening a lot of doors for these children,” said Dana Curtis, the related services lead at the Victoria school district. “We’re probably one of the districts that are using something like this, so we are hoping if it works well for us, that it’s something that other districts will want to consider using.”

The district’s special education department rolled out its Mobile Sensory Motor Unit on Monday for a weeklong demonstration at the campuses it will service. The unit was at Hopkins Elementary School on Wednesday morning, where about 15 students – who are either in the preschool programs for children with disabilities or in prekindergarten classes – used the bus for the first time.

The outside of the lime green bus is designed with the autism multicolored puzzle piece logo and cartoon characters “Captain Ability,” a female superhero who personifies the special education department, a student in a wheelchair and a student who is nonverbal is using a communication device to say “Our future is bright.”

“Every body” was added to the district’s slogan on the side of the bus, “Every child, every classroom, every day,” to represent all physical bodies of its students, said Curtis.

Once a week, the mobile unit will visit F.W. Gross Elementary, Vickers Elementary, Hopkins Elementary, Crain Elementary, Torres Elementary and Ella Schorlemmer Elementary schools covered by the grant, where more than 180 students will benefit from the use, Curtis said.

A physical therapist and occupational therapist, depending on their availability at each campus, will be on-hand to assist the students.

Activities inside the bus include yoga, warm-up stretches, monkey bars, a staircase, rock wall, trapeze bar and a balance beam.

As students complete the activities, they will end their session with whiteboard and markers to follow up the gross motor skills with fine motor skills.

The unit was created through a portion of the $1 million grant, the 2018-2019 Services to Students with Autism Grant, the school district’s special education department received in June.

A lack of designated space on-campuses for sensory motor time was addressed through the mobile gym, said Curtis, who was part of the grant team.

The full-size, 1996 school bus was previously owned by a San Antonio woman who used the bus as a mobile gym for private schools. After the district got the bus in July, they began to make basic repairs.

Although delays, such as leaks, pushed back the time the bus could hit the road, Curtis said she is excited to see the idea come to fruition.

Goals include expanding the number of campuses the bus visits and including a speech therapist to work with students on the bus, Curtis said, adding the long-term goal is to match the sessions that take place in the motor unit to the on-campus motor classrooms.

Instead of purchasing another bus, she plans to consider add-ons, such as a lift, to the current unit, she said.

Prekindergarten student Autumn Adams, who grinned from ear-to-ear, burrowed her way through a multicolored tunnel after she performed each of the different activities.

“Going through the tunnel,” said Autumn, 5, was her favorite part of the bus. “It was fun.”

Of the 34 school districts that applied for the grant, the Victoria school district was one of ten selected. The grant period is from May 1 to Aug. 31, 2019. The focus areas in the grant include:

Do you think school sports should have been put on hold?