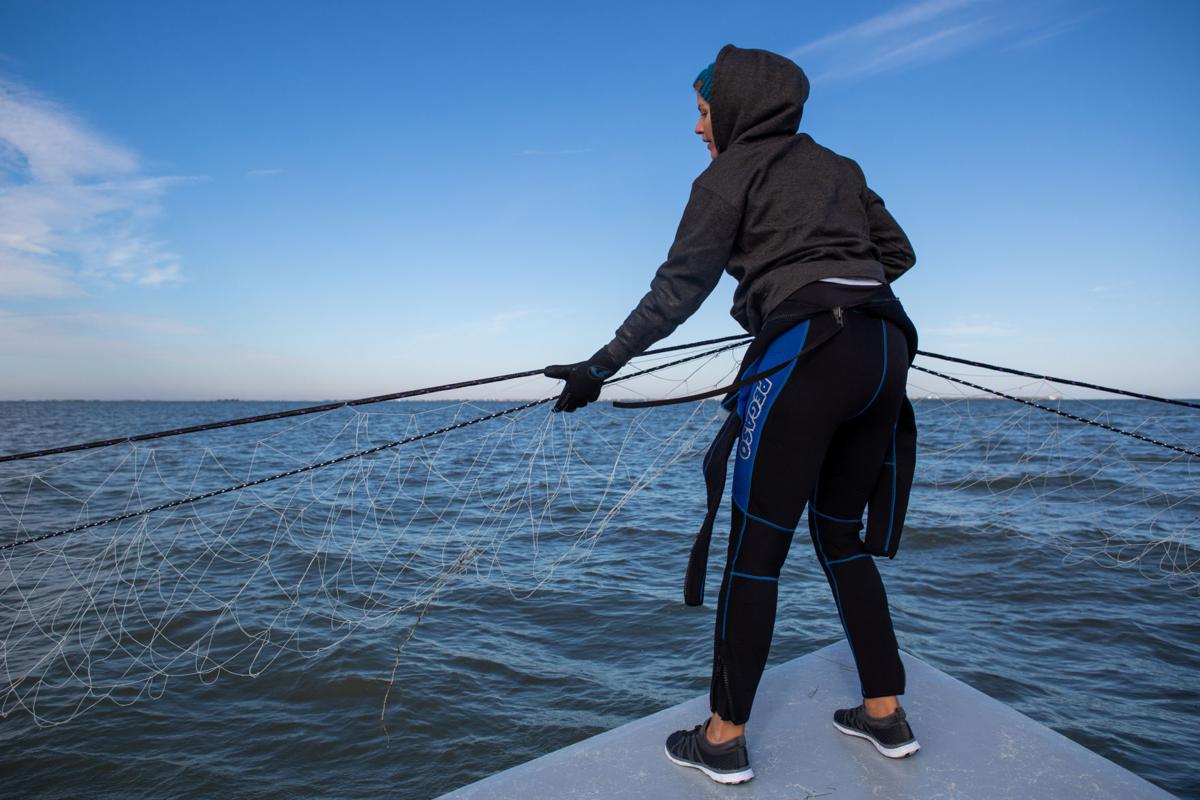 Marine conservation biologist Christine Figgener checks to see whether she and her colleagues caught any sea turtles on a recent trip to Decros Point in Port O’Connor, where they tried to catch endangered sea turtles as part of the Matagorda Bay Ecosystem Assessment. The team does net checks every 20-30 minutes and can go hours without catching anything. 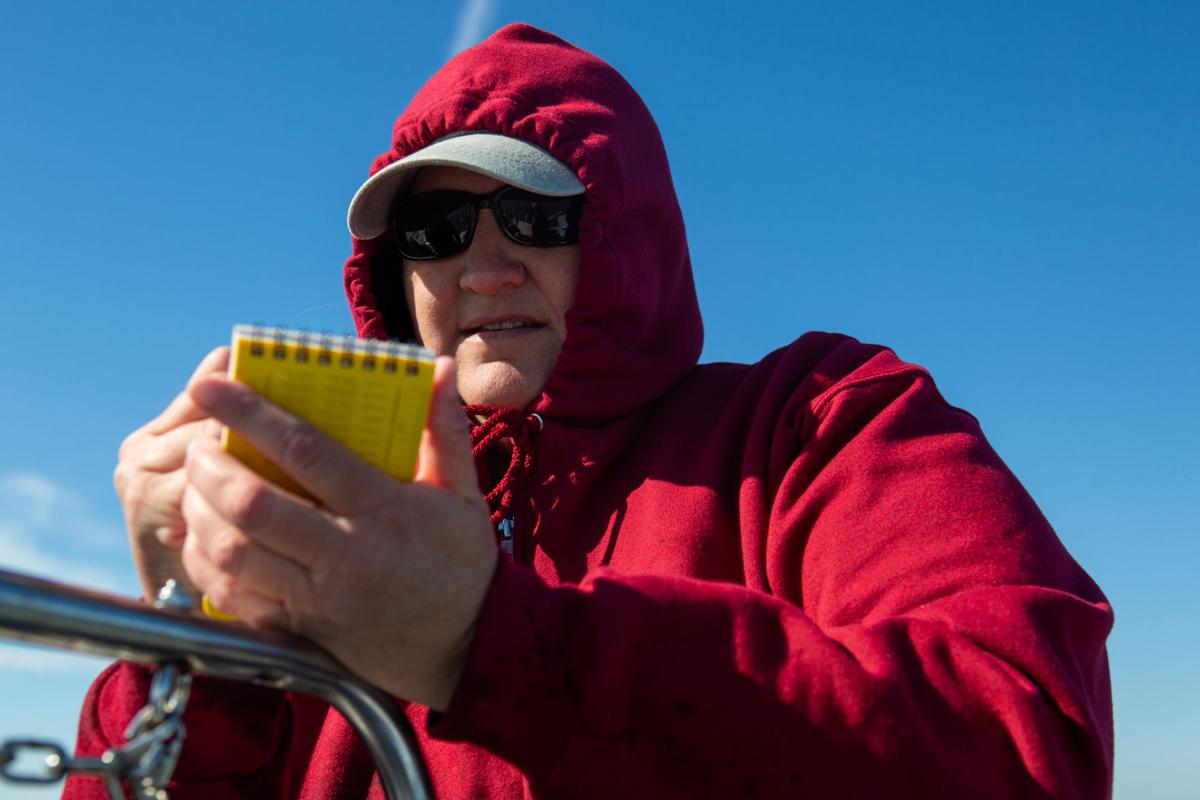 BELOW: Tasha Metz takes some notes while waiting for the next net check. 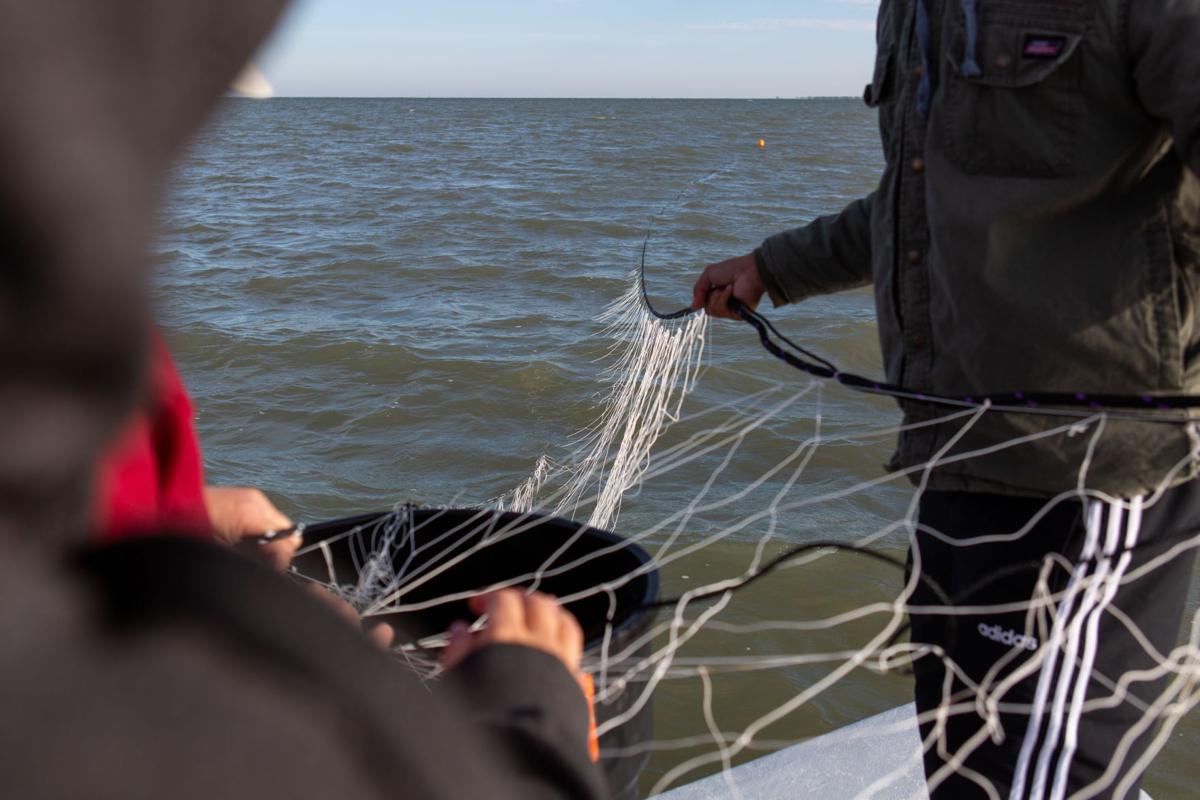 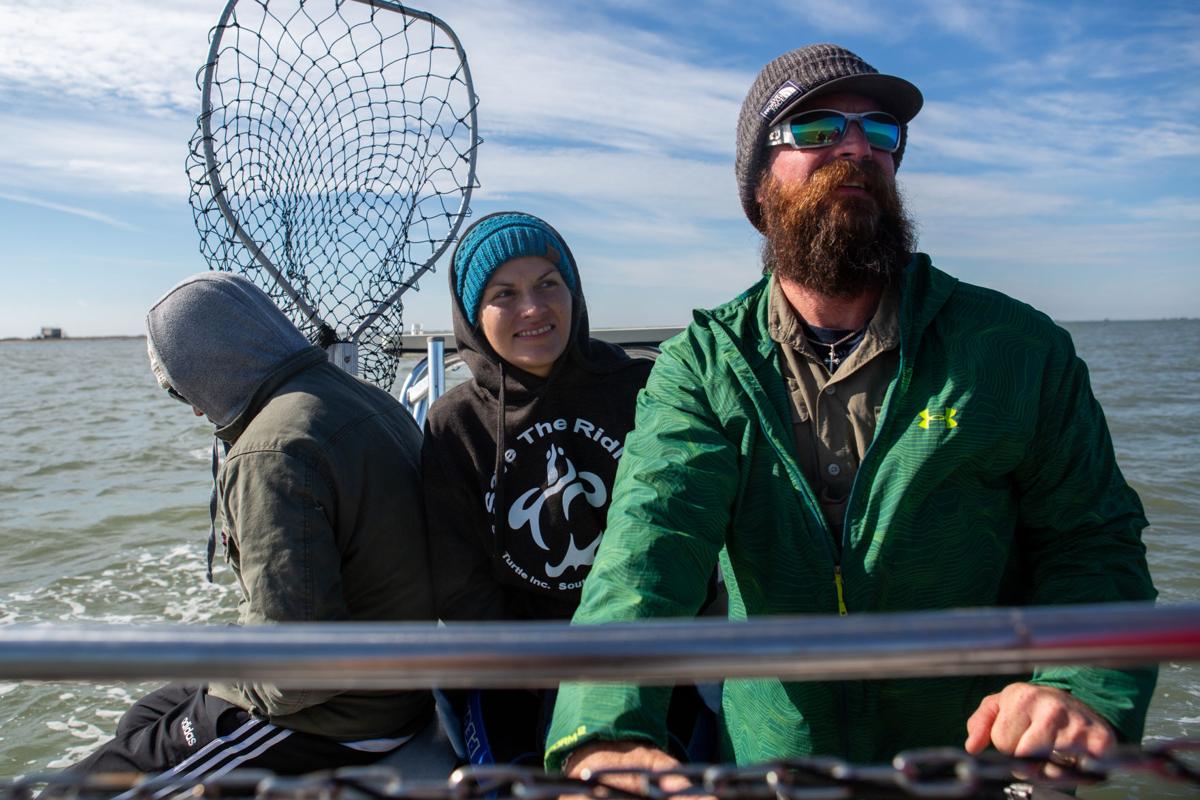 Capt. James Helms, with Christine Figgener, middle, and Andrey Castillo MacCarthy next to him, takes the group of sea turtle researchers to a spot in Matagorda Bay where the group has had past success with finding sea turtles. 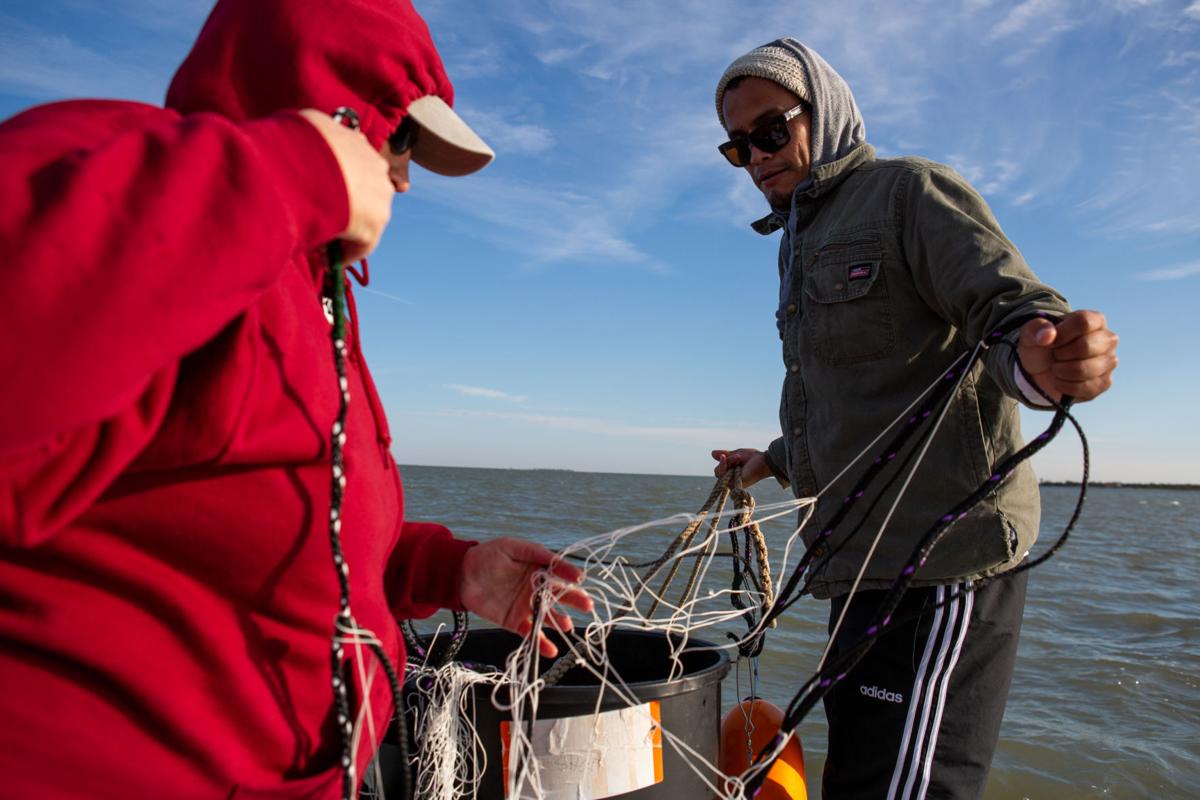 Andrey Castillo MacCarthy, right, and Tasha Metz prepare the nets for catching sea turtles as part of their study. 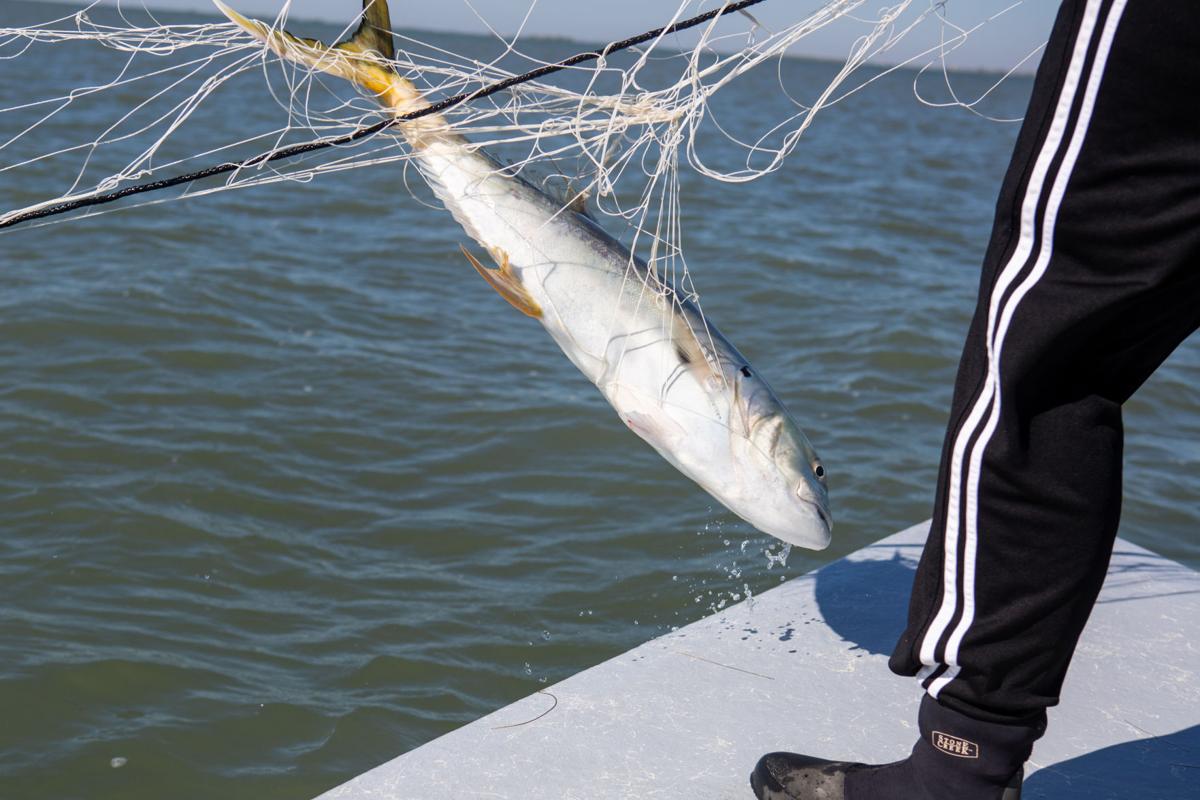 Tasha Metz pulls in a Jack Crevalle while doing a net check for sea turtles. Sometimes the researchers will catch fish or other species in the nets, so they throw them back.

Marine conservation biologist Christine Figgener checks to see whether she and her colleagues caught any sea turtles on a recent trip to Decros Point in Port O’Connor, where they tried to catch endangered sea turtles as part of the Matagorda Bay Ecosystem Assessment. The team does net checks every 20-30 minutes and can go hours without catching anything.

BELOW: Tasha Metz takes some notes while waiting for the next net check.

Capt. James Helms, with Christine Figgener, middle, and Andrey Castillo MacCarthy next to him, takes the group of sea turtle researchers to a spot in Matagorda Bay where the group has had past success with finding sea turtles.

Andrey Castillo MacCarthy, right, and Tasha Metz prepare the nets for catching sea turtles as part of their study.

Tasha Metz pulls in a Jack Crevalle while doing a net check for sea turtles. Sometimes the researchers will catch fish or other species in the nets, so they throw them back.

The temperature hovered around a chilling 46 degrees Fahrenheit and the team shivered as they threw two nets out in Matagorda Bay, near sea grass beds where sea turtles have been known to feed.

Those nets, each about 100 meters long, were checked every 20 to 30 minutes as the sun rose and crouched toward setting, but sea turtles never showed.

“It’s frustrating, but that is what is so cool about this project. No one really knows where they are going,” Kimber De Salvo said from the shores of King Fisher Beach, where she waited for hours with a research assistant for the boat crew to arrive with turtles.

De Salvo is a communications program assistant with Texas Sea Grant, which is directed by Pamela Plotkin, who is a co-principal investigator on Matagorda Bay Ecosystem Assessment – a two-year project that started in May with $2.7 million in funding from the Texas Comptroller of Public Accounts.

This is the latest in a saga of trips that Plotkin’s team of researchers has made to Port O’Connor to try to net sea turtles as part of the study.

The team has caught four green sea turtles during 56 hours of netting for the project, or one turtle for every 14 hours of work, said Christine Figgener, a marine conservation biologist on the project.

“Field work is always super unpredictable, especially when you start at a new site that you are just not as familiar with,” Figgener said. “I am so used to it, but it is quite challenging. For every sea turtle you catch, there is usually quite a few days of disappointment.”

The crew originally tried to catch turtles near Magnolia Beach, where historical data and local tips guided them. But with little luck, Helms took them to Decros Point.

That spot proved to be fruitful on one, two-day trip, and the opposite on the next.

“There seems to be quite a lot of variation in movement and now, especially when temperatures drop, the turtles might be going elsewhere,” Figgener said. “My prediction is that what we will see is a lot of seasonal movement.”

Researchers attach acoustic and satellite tags to the turtles before they are released to track their movements. Two tissue samples are also collected, as well as their weight and measurements to analyze growth and diet several years back.

“We’re also interested in seeing if the species have certain preferences, for example, for certain seagrass beds in one region and stick around there a long time ... (and) map out hot spots that are particularly critical to turtles,” Figgener said.

Those understood “hot spots” could enlighten plans for development that might pose harm to the species, as well as identify favorable environmental characteristics that could be replicated elsewhere, she said.

But even when turtles are netted, the tags don’t always work. Figgener used a larger version of the same satellite trackers to study adult sea turtles in Costa Rica that she said worked “brilliantly.”

She would get a GPS location about every hour from each tag that was 11 meters off at the worst, she said. While the GPS reading takes only about 1-2 seconds to store on the tag, turtles have to stay on the water surface for about eight seconds for the data to transfer.

Sea turtles are ectothermic, meaning that they cannot regulate their own body temperatures. The reptiles usually bask in the sun on the surface, allow the data time to transfer. But Figgener suspects the warm waters in Matagorda Bay, particularly during the summer, keeps them from needing to warm up as frequently.

Unless researchers catch the same turtles twice, data from those that aren’t visiting the surface enough won’t transfer.

The acoustic trackers can also be unreliable because the team has been tagging juvenile turtles, which grow fast and can shed those tags in a few months. Still, that is enough time to get “pretty good” data of movement, Figgener said.

“It is just more of a challenge of attaching it in a way that it is not immediately shed,” she said. “We’re still in the stage of testing out a lot of the equipment.”

All six of the sea turtle species that can be found on the Texas Coast are listed as endangered or threatened under the Endangered Species Act of 1973.

A projection model included in the bi-national recovery plan for Kemp’s ridley between the U.S. and Mexico predicted an exponential increase in its population by 2020.

“That didn’t happen,” said Donna Shaver, the director of the sea turtle science and recovery division at Padre Island National Seashore who has studied sea turtles in Texas for almost 40 years.

The highest number of nests documented on the Texas Coast since 2010 was 353 in 2017. During the 2019 nesting season, the National Park Service documented 190 Kemp’s ridley nests.

That plan was created before the Deepwater Horizon oil spill in 2010, when the population had a downturn, and nesting numbers have fluctuated ever since, Shaver said.

In fact, annual numbers for all sea turtle species’ nests documented along the Texas Coast have varied in the past decade, she said.

Female sea turtles do not nest every year, but that is not the only factor involved in fluctuating populations, Shaver said. There are likely numerous elements at play, but more research is needed to understand what is happening.

“We need to have more information on the growth rates of these turtles,” she said. “When you catch them, do they look robust? Are they doing well? A lot of the numbers go into the mathematical models; their needs to be more data to make predictions.”

Shaver netted green sea turtles in the late 1980s through mid-1990s in the Corpus Christi area for her dissertation and had little luck catching turtles in the Upper and Lower Laguna Madre before focusing on the Port Mansfield Channel.

Funding is limited for research projects in the state that require this kind of in-water fieldwork because of the difficulty, she said.

“The plans will say, ‘Oh, we need this in-water research ... We need to have the information on the turtles as they’re growing up, not just what is nesting on the beach.’ But then they don’t want to fund it, so it is great to see Dr. Pamela Plotkin and her team out there doing this work.”

Plotkin’s research team is taking its last trip of the year to Port O’Connor this weekend with hopes to net more turtles.

Regardless, they’ll be back out on the water next year.

“I always try to remind myself that we do work with endangered species,” Figgener said. “If they were abundant, we would probably not have the issues we have. Like if I worked with ants, I would probably be able to collect millions of samples within a day.”

Have a local tip for researchers?

Christine Figgener would love to hear suggestions from locals who have spotted sea turtles in Matagorda Bay.

All tips can be emailed to her at cfiggener@bio.tamu.edu with the subject line, "Sea Turtles in Matagorda Bay."

Sea turtles are illegal to catch without a research permit.

Residents among the marshes, oyster reefs, islands and beaches of Matagorda Bay live in what is considered to be an idealized estuary, along w…