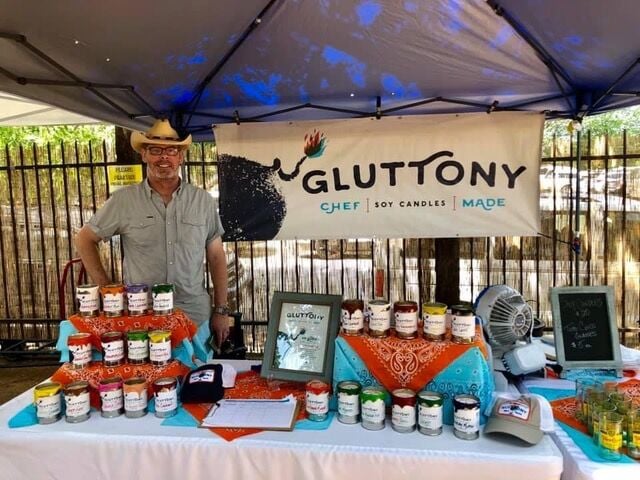 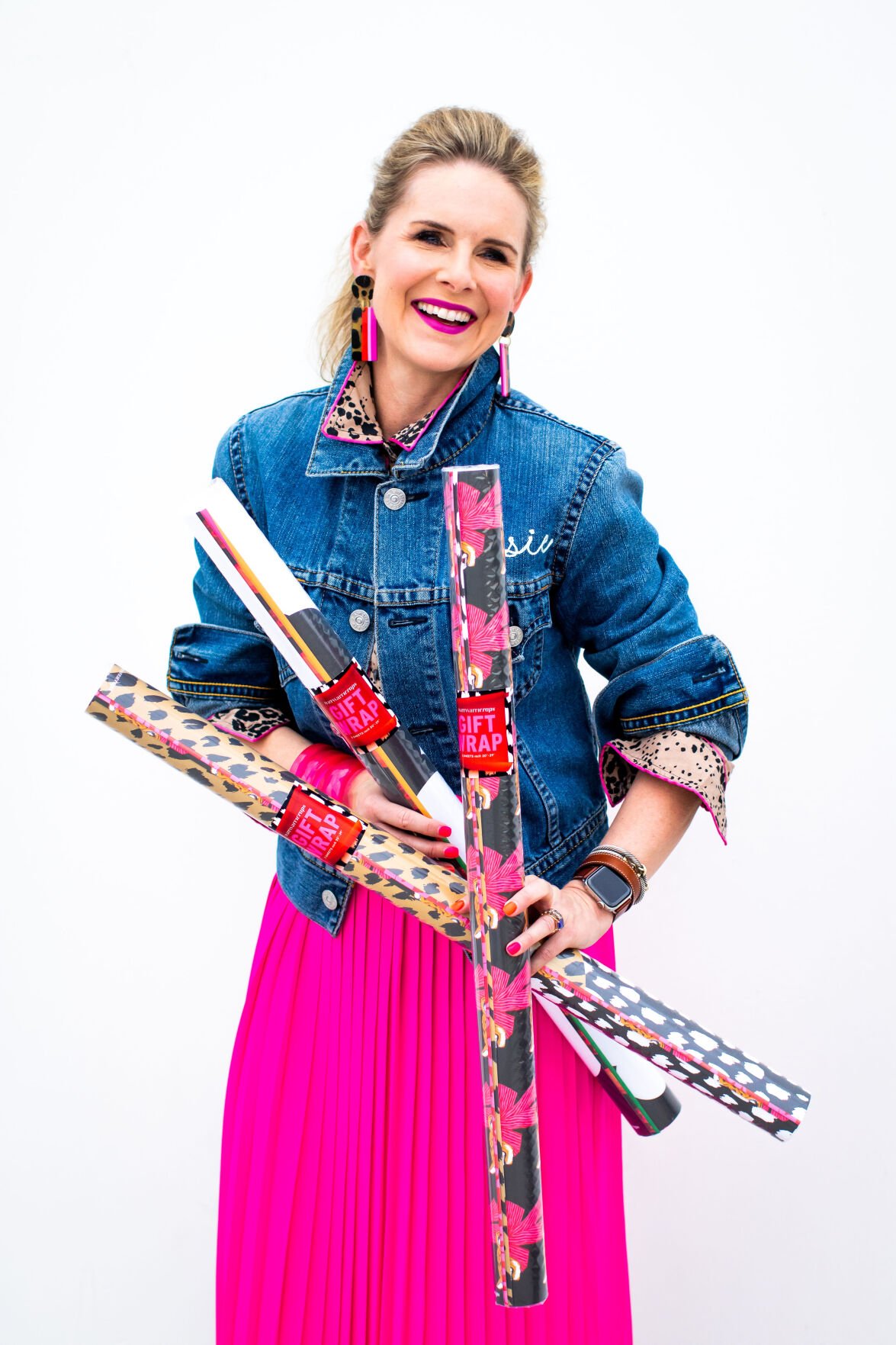 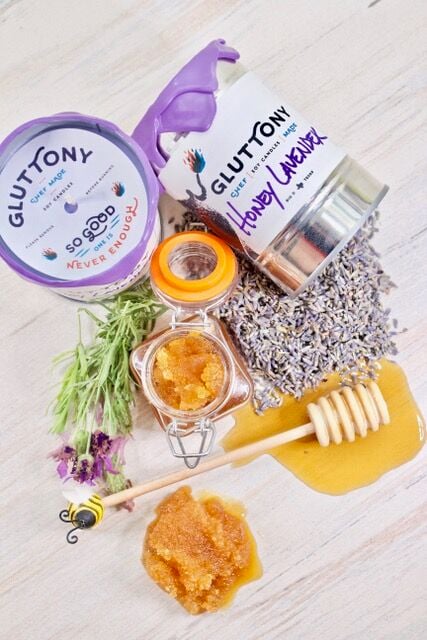 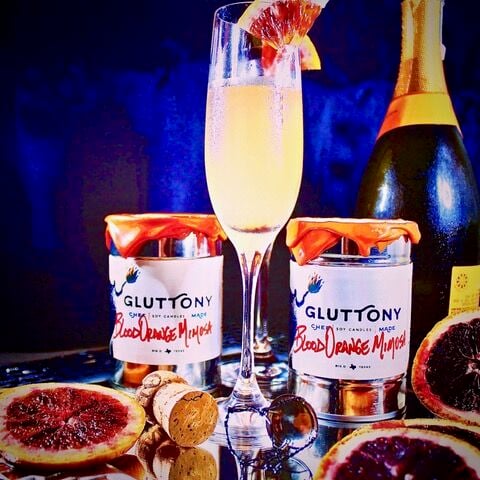 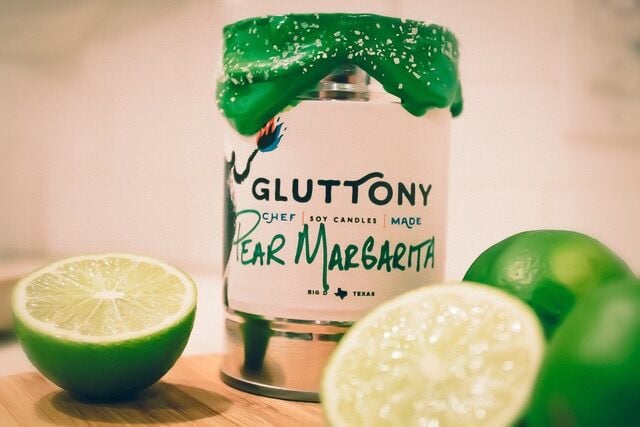 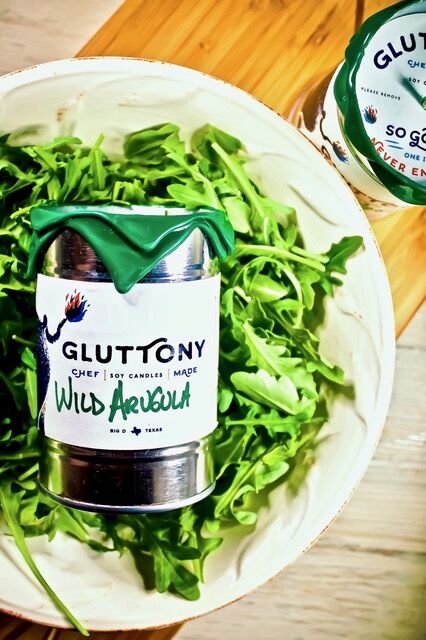 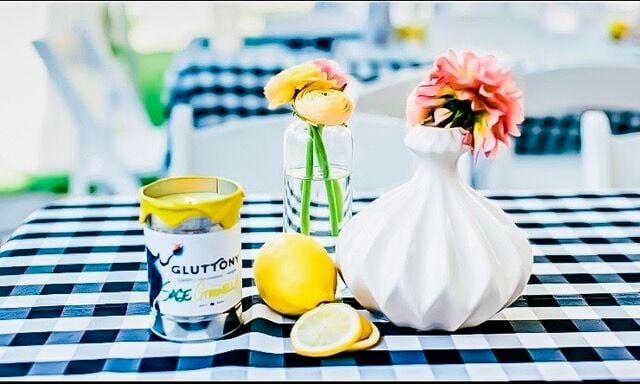 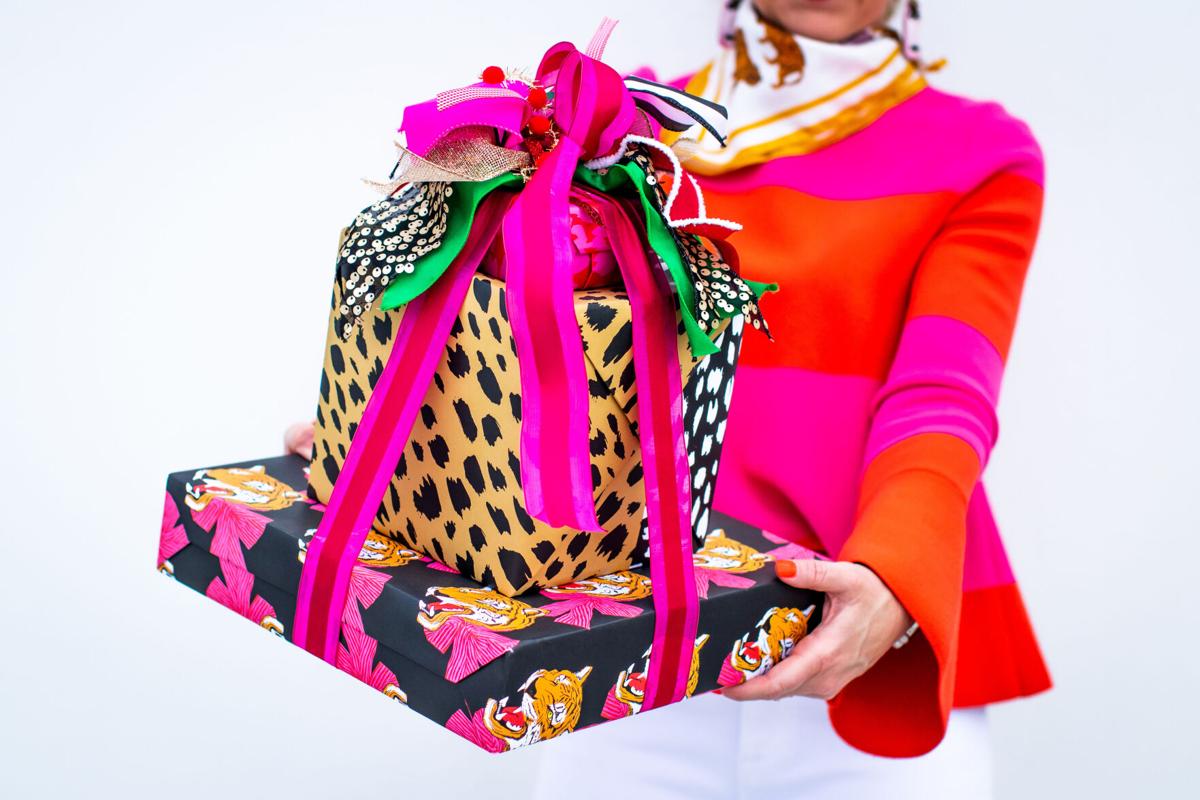 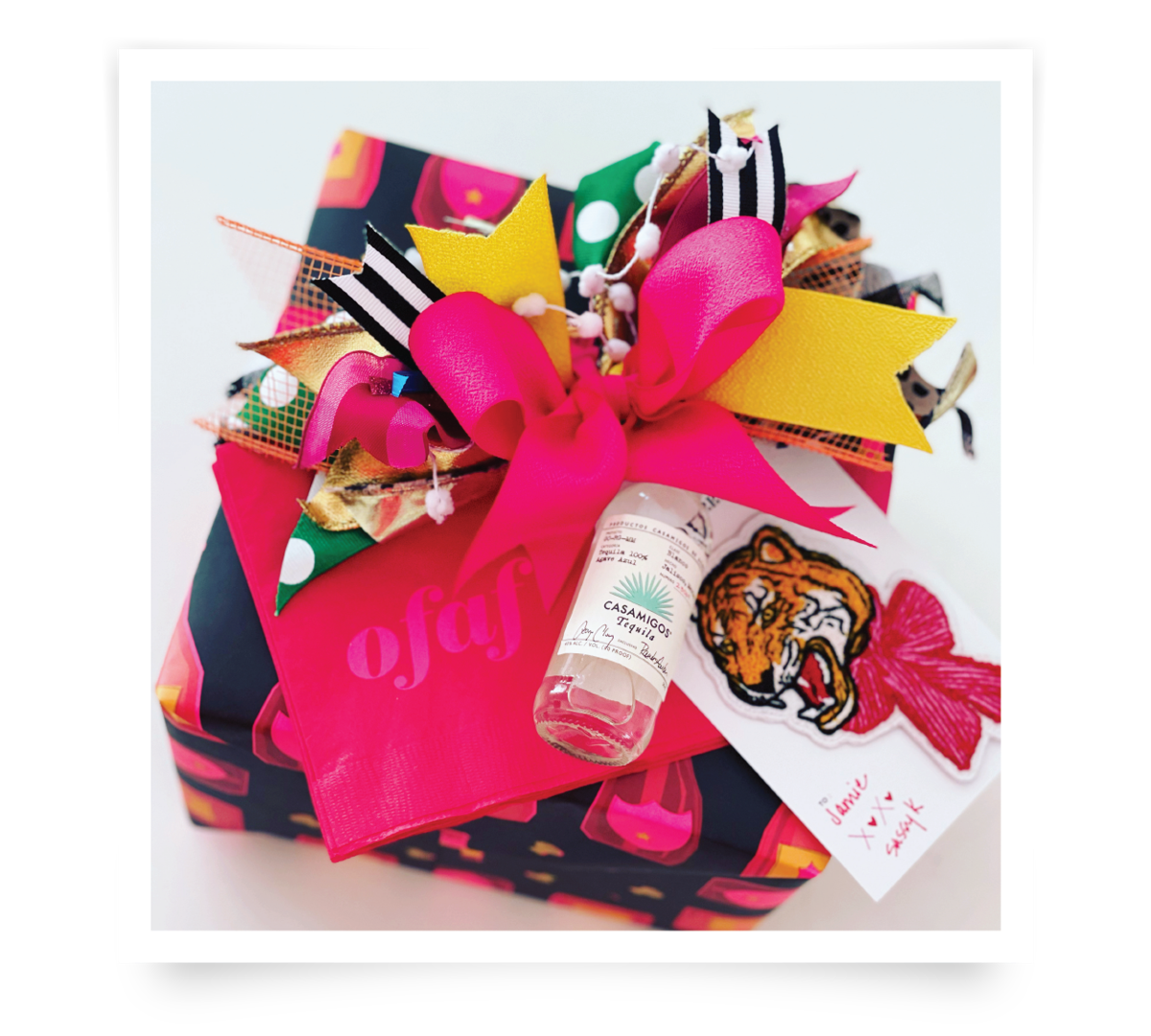 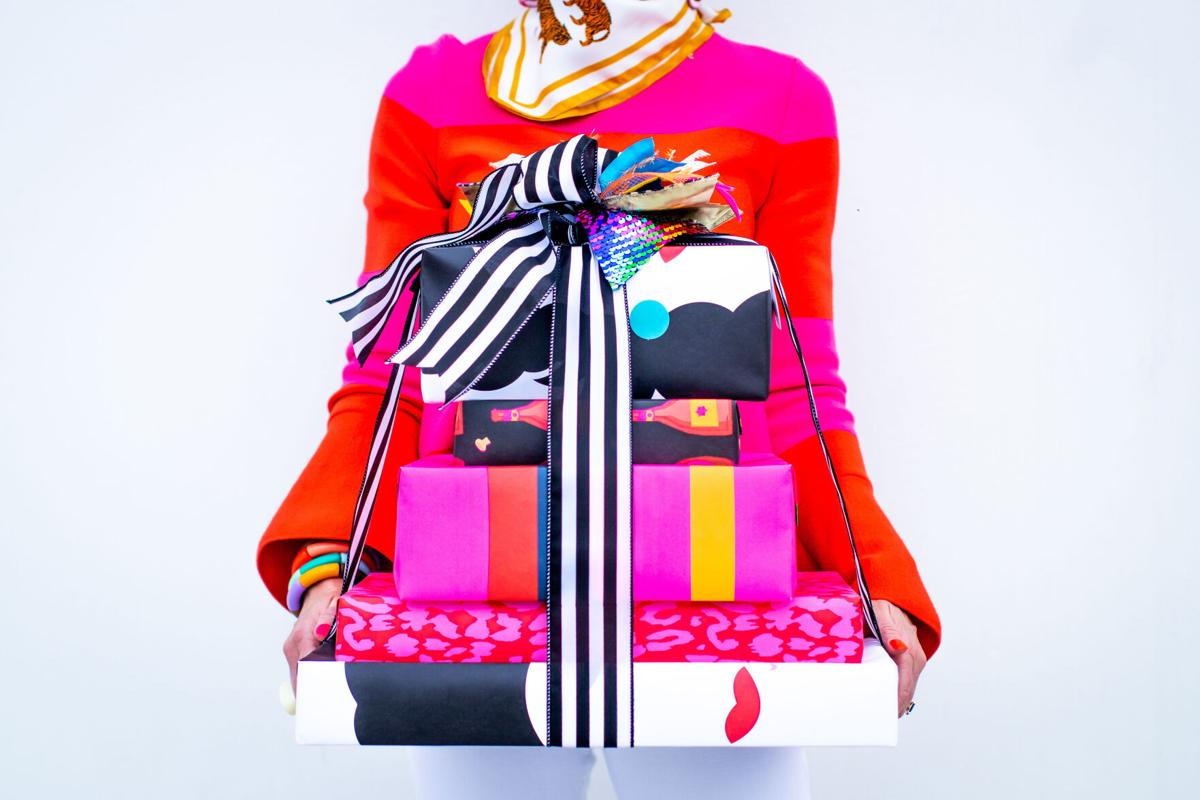 Cassie Murphree Kruemcke, 48, of Fort Worth, and Bryce Murphree, 50, of Dallas, brother and sister, were reared in Victoria. They have their mother Judy Murphree to thank for their flair for everything creative, and they are following in her footsteps by opening their own small businesses.

Judy Murphree, who died in 2014, made beautiful ceramic angels for Hospice of South Texas and infused creative beauty into everyday life.

Kruemcke was a graphic designer for a top advertising agency before she decided to make her business WirrWarr Wraps a full-time gig in 2020. WirrWarr Wraps sells Kruemcke’s custom-designed bold and colorful wrapping paper printed in Fort Worth and her zany, eclectic ribbon kits. The word wirrwarr is a German tongue-twister meaning chaos, and Kruemcke (though she is not German) has a lot of German influence in her life, including a large German Deutsch Drahthaar named Charlie (That’s a dog).

“I’m a designer, so I love symmetry and typography and the word struck me on all levels as a fun, peculiar word to say. My mind was chaotic in a fun way at the time,” Kruemcke said. “It may be hard to say, but you won’t forget it. It translates loosely to creatively fun chaos.”

Kruemcke’s love for wrapping packages dates back to her time growing up in Victoria when her mother’s packages were thought by some to be too beautiful to open.

“My mother was known for her creativity and her beautiful wrapping,” Kruemcke said. “Her bows were perfect, and my bows are a creative cacophony of lots of different patterns and textures and craziness.”

Kruemcke’s bows are a way around having to create the perfect bow, a skill that Kruemcke said she did not inherit from her mother. Kruemcke teaches classes on the WirrWarr Way of bow-making and package wrapping, and she provides a link to a tutorial with the purchase of her ribbon kit. Rolls of wrapping paper sell for $14 each while the ribbon kits sell for $6 each.

Kruemcke’s wrapping paper designs are inspired by her love for Dolly Parton, who was a “big and bold” positive figure during the pandemic, leopard and other animal prints, and champagne. Red and pink are common threads in her designs, and her icon is a tiger head with a red or pink bow.

“He (the tiger head) was probably Gucci-inspired,” Kruemcke said. “I created him and said he needs a bow, so away we went. He’s fierce but sassy, which is very much me.”

As a designer, Kruemcke has knowledge of paper and print that she put to good use. She selected the highest quality paper that folds perfectly and feels good in the hands. She always aims to ensure her products are up to the standards of excellence set by her mother.

“The wrapping paper is really a marriage of my talent as a designer, my knowledge of paper and my love for gift wrapping that my mother taught me,” Kruemcke said. “So I have finally come to a point in my life where I combine all of those in an organic and natural way.”

Murphree, a chef, started a candle business, Gluttony Candles, in 2018. When the farmer’s markets, where he sold many of his candles, went away during the pandemic, he started Gluttony Foods as well. He creates a different menu every week, which he emails to his customers. He cooks all day on Thursdays, and he either delivers the food or his customers pick it up.

His food business has blown up, and his chef-made, culinary-inspired candles have taken off, too.

“I went from thinking I’m not going to have anything to do to not having enough time to do the things I want,” Murphree said.

In addition to weekend markets, Murphree sells his candles online and in about a dozen retail stores, including the gift shop at Hotel Emma in San Antonio. For Christmas, Murphree sent candles to the culinary director of the hotel with whom he had worked before. Next thing he knew, the purchasing agent at the gift shop was requesting to sell his candles.

Murphree and his wife love burning candles around the house but found they were disappointed with many of them. The scent either faded quickly or the candle did not burn long, or both. The candle gig began between chef jobs when someone gave Murphree a do-it-yourself candle kit.

“I thought, I’ll make my own fragrance oils and come up with a better vessel,” he said.

Murphree began researching his product, and discovered that he wanted to create the cleanest burning candles possible. He decided on soy wax and wicks without heavy metals such as lead or zinc. When he and his wife began giving their candles to friends and family as gifts, requests for more started flooding in and the candle-making snowballed from there. They started attending farmers markets on the weekends and made a website.

“Because I make my own fragrance oils, the scents are more unique than other candle lines,” Murphree said.

“We try to keep it fresh and have different scents on a regular basis along with the popular staples,” Murphree said. “We like to keep the creativity going.”

Grapeseed oil is the carrier oil for the fragrances Murphree makes. He steeps ingredients such as orange zest and chili peppers in the oil until he achieves the scent he wants. The $23 candles burn for 70 to 75 hours.

“We use the maximum amount of fragrance oil that the wax will take,” Murphree said.

The candle vessel is a 14-ounce silver food can, which can be recycled. Each candle has a burst of dripping color at the top created by dipping the can in hot glue and crayon. Kruemcke designed the can labels for her brother.

Murphree said his creativity definitely originated with his mother and her mother before her.

“I found creativity in a lot of ways through cooking, and my candles are an extension of that,” Murphree said. “My sister is just as creative as my mother, if not more so, and I just try to keep up with the two of them.”

Judy Murphree and her husband John Murphree, who died in 2013, never had the chance to see their children start their own businesses.

“It always circles back to how and where you grow up,” Kruemcke said. “This (article) is a sweet opportunity that makes you think she’s up there and looking down, as well as my father, who knew how creative we all were, too.”