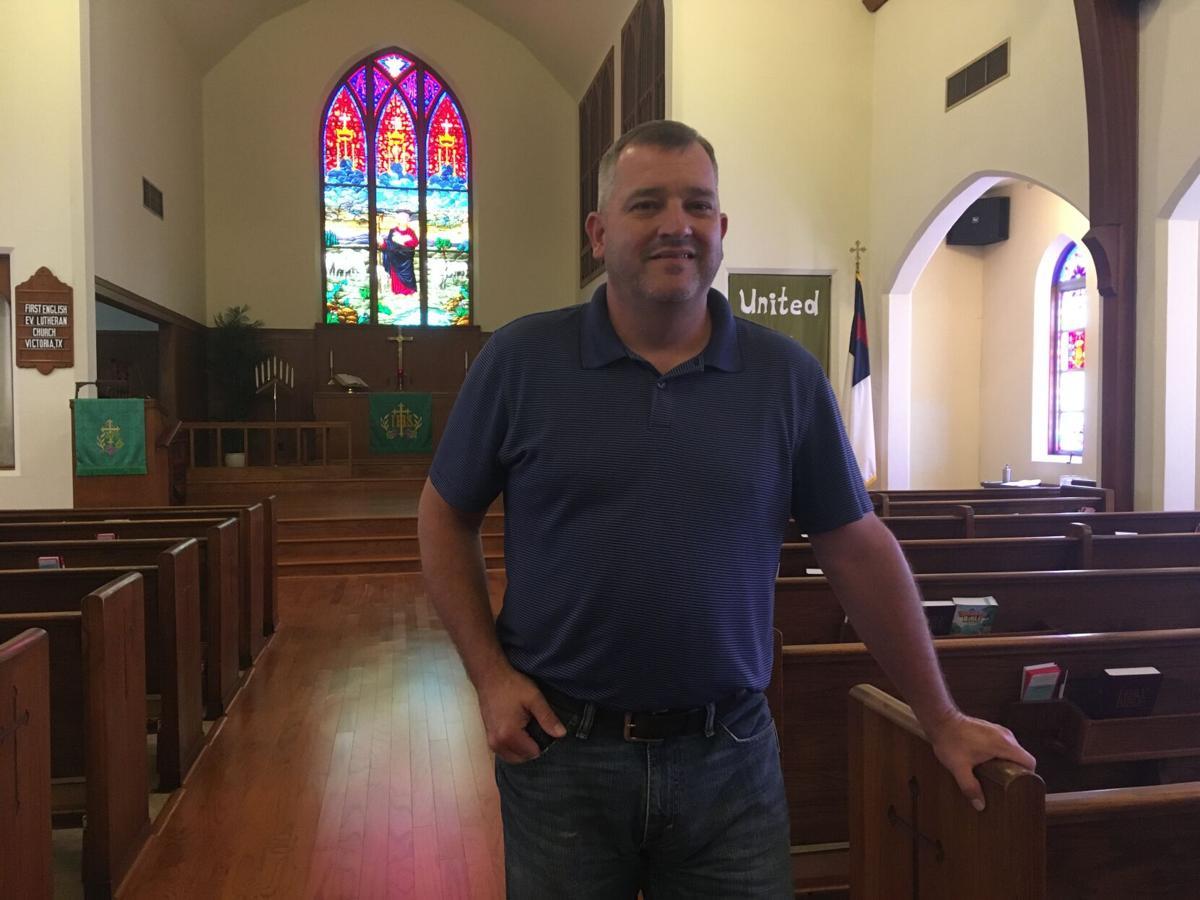 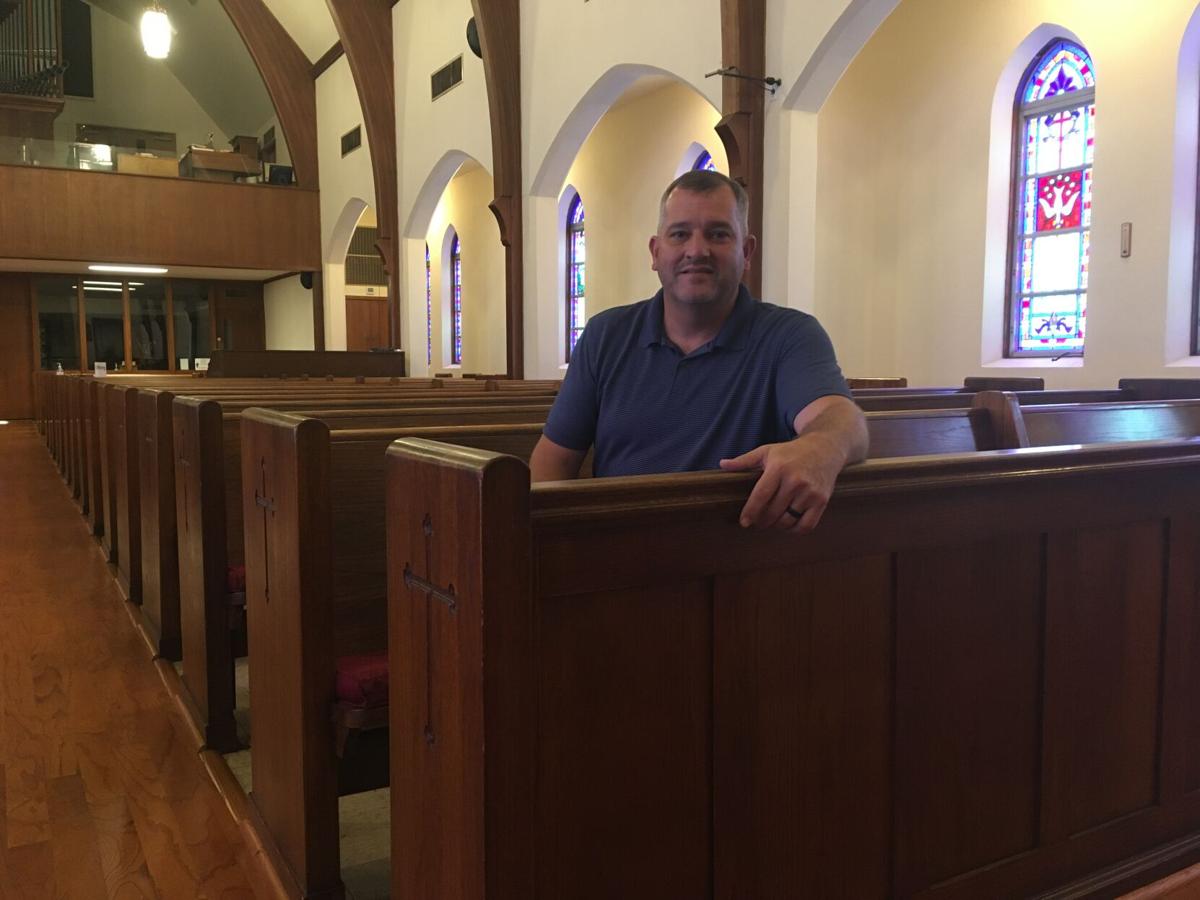 The Rev. Charles “Chip” Reynolds, 50, feels like he and his family are coming home.

Reynolds, who serves as pastor for a church in New Braunfels, will assume the position of senior pastor at First English Lutheran Church in Victoria Aug. 1. The Rev. Jim Pearson, the current pastor, will retire after about nine years.

“Chip Reynolds is a breath of fresh air,” said Dru Swoboda, chair of the call committee formed to find a new pastor for the church. “COVID limited our interactions, so we’re excited to get back to worshipping as a family.”

Reynolds grew up in the Tampa, Fla. area and joined the Army right after high school. He served three years of active duty before he enrolled at Angelo State University in San Angelo where he studied communication.

Reynolds was raised in the Assembly of God church but became Baptist during his time in the Army and college. He also belonged to the Methodist church before finding his way to the Lutheran faith.

Before becoming a pastor, Reynolds taught English, speech and theater in high schools for 11 years, and some of those years were spent at Industrial High School. While there, Reynolds and his wife, Kathryn Reynolds, were looking for a place for their family to worship. When Kathryn Reynolds sang at a wedding at Our Saviour’s Lutheran in Victoria, the couple fell in love with the church and joined. The Reynolds have two children, Olivia Reynolds, 15, and Charles Reynolds, 18.

“We fell in love with Victoria,” Reynolds said. “We made a lot of friends, so coming back, it’s nice to re-engage with all of those folks.”

Reynolds first felt the calling to religious life at the age of 12 while attending a summer camp. The worship leader at the camp said he had a feeling someone was being called to ministry. He asked the children to close their eyes, and then Reynolds heard an “almost audible” voice say, “It’s you.”

“I was not confident enough to raise my hand, but in the back of my head I heard those words,” Reynolds said. “Fast-forward and all throughout my young adult life, I served in youth ministry and Sunday school teaching, and I led worship. I became involved in all facets of the church and contemplated ministry but never jumped into it.”

Reynolds was serving on the Praise Team at Our Saviour’s when the Rev. John Waak, senior pastor of the church at that time, asked to speak with him.

“Have you ever been called to ministry?” Waak asked Reynolds.

Reynolds shared his story about being called at camp, and Waak asked why he never pursued the calling.

Reynolds responded that he did not feel worthy of being a minister.

“I didn’t feel that I met that standard,” Reynolds said. “But if you read through the scriptures, you realize that no one meets that standard.”

“It was a big moment for me to realize that if God has a plan for me, it’s going to be because of my ability to yield to him and let him work in me — not because of anything I did or do,” Reynolds said. “I’ll never be worthy enough to be a minister, but he makes me what I need to be.”

He recalled the saying, “God doesn’t call the equipped, he equips the called,” as inspirational on his journey to becoming a pastor.

Reynolds joined the staff of Our Saviour’s, and he enrolled in Luther Seminary in St. Paul, Minn., where most of his studies were conducted remotely. He attended in-person classes for three weeks in the summer and three weeks in January.

During Reynold’s time as a church staff member, he led worship and assumed other pastor duties under supervision. After his ordination, he served the church for one year before moving to Utah where he worked for a church for three years.

Reynolds made his way back to Texas when he accepted the position with St. Paul Lutheran Church in New Braunfels, where he has served as pastor for five and one-half years.

When Pearson decided to retire from First English Lutheran, Reynolds said his phone “blew up” with messages about the job opening. At first, he and his wife decided not to pursue the opportunity, but it just kept knocking. So Reynolds submitted his application. He interviewed, which included speaking in front of the congregation, and the church voted and offered him the job three weeks later.

“So we said let’s go through the process, and they said they wanted us to come,” Reynolds said. “It’s exciting, and it’s going to be a good move.”

The church’s call committee decided Reynolds was the best fit for the job for many reasons. The committee met to discuss the direction they wanted to see the church move. They looked at goals for one year, five years and 10 years down the road. During the interview process, committee members identified Reynolds as the one who could handle the needs of all the church’s members — the older community and younger families.

Also, Reynolds’ spiritual ideology was scripture-based, which was important to the committee, and he was a people person, so he was the best candidate to reach out to the public with ministry efforts.

“We are all excited. We are gathering a long-range plan to minister to families, and we have a mission to love and teach and show faith through service to families in the Victoria area,” Swoboda said.

After accepting the position, Reynolds and church members held a forum to discuss the church’s mission, vision and identity in the community. For any good road trip, travelers need a map, he said.

“You need to know where you are before you decide where you’re going. I listened to them tell me who they were as a congregation, and we looked at the areas we need to start working on to be that church of service in the community,” Reynolds said. “We want to faithfully step out into that work.”

Areas of importance for Reynolds are the ways in which the church gathers and worships, educates and serves.

“We looked at each area specifically, and now we’re pushing into what changes need to be made and how we need to grow into ministries here and in the community, and the relationships we need to build,” Reynolds said.

Reynolds said the church wants to work with other churches and more nonprofits. Members of the church already enjoy strong relationships with Mid-Coast Family Services and CASA, so they want to continue those relationships and build others that will allow them to be a “holistic ministry for the entire city of Victoria.” The church also wants to step up its digital game with streaming services and perhaps even podcasts.

Reynolds is also looking to transition one of the church’s two worship services into a more contemporary style, which will maintain traditional elements but not be as structured. It will elevate the music and make the liturgy more conversational, Reynolds said. He also plans to maintain the other service in the traditional style, which he said is equally important.

“This church has already been very affirming that they think I’m the person to lead them, and we’re not even here yet,” Reynolds said. “We want First English to become a force for service in this community, so hopefully you’ll be hearing a lot more about what we’re doing and seeing the products of that work.”