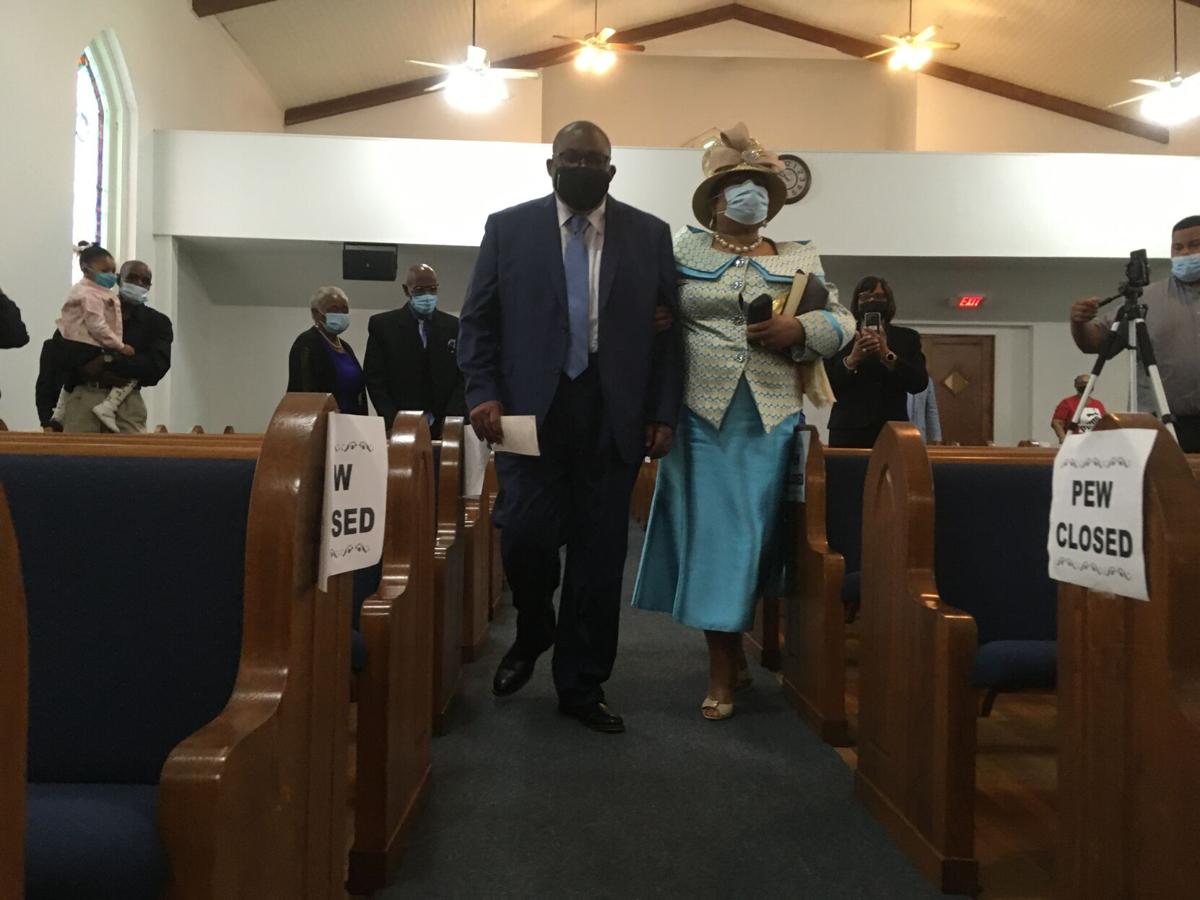 The Rev. Gregory O'Keith Wyatt and his wife Elaine Wyatt enter the Palestine Missionary Baptist church during a service honoring them on March 14. 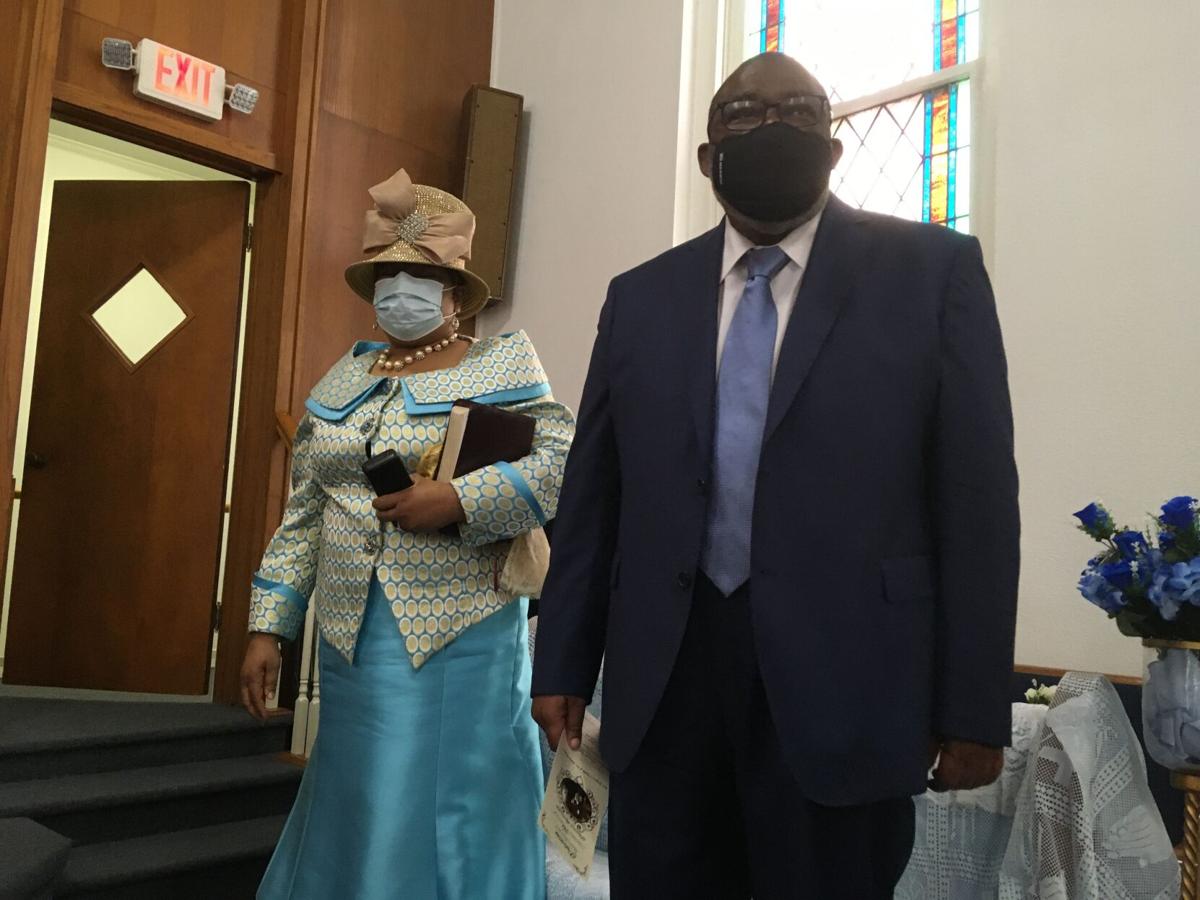 The Rev. Gregory O’Keith Wyatt and his wife, Elaine Wyatt, attend a service in their honor at Palestine Missionary Baptist Church on March 14. 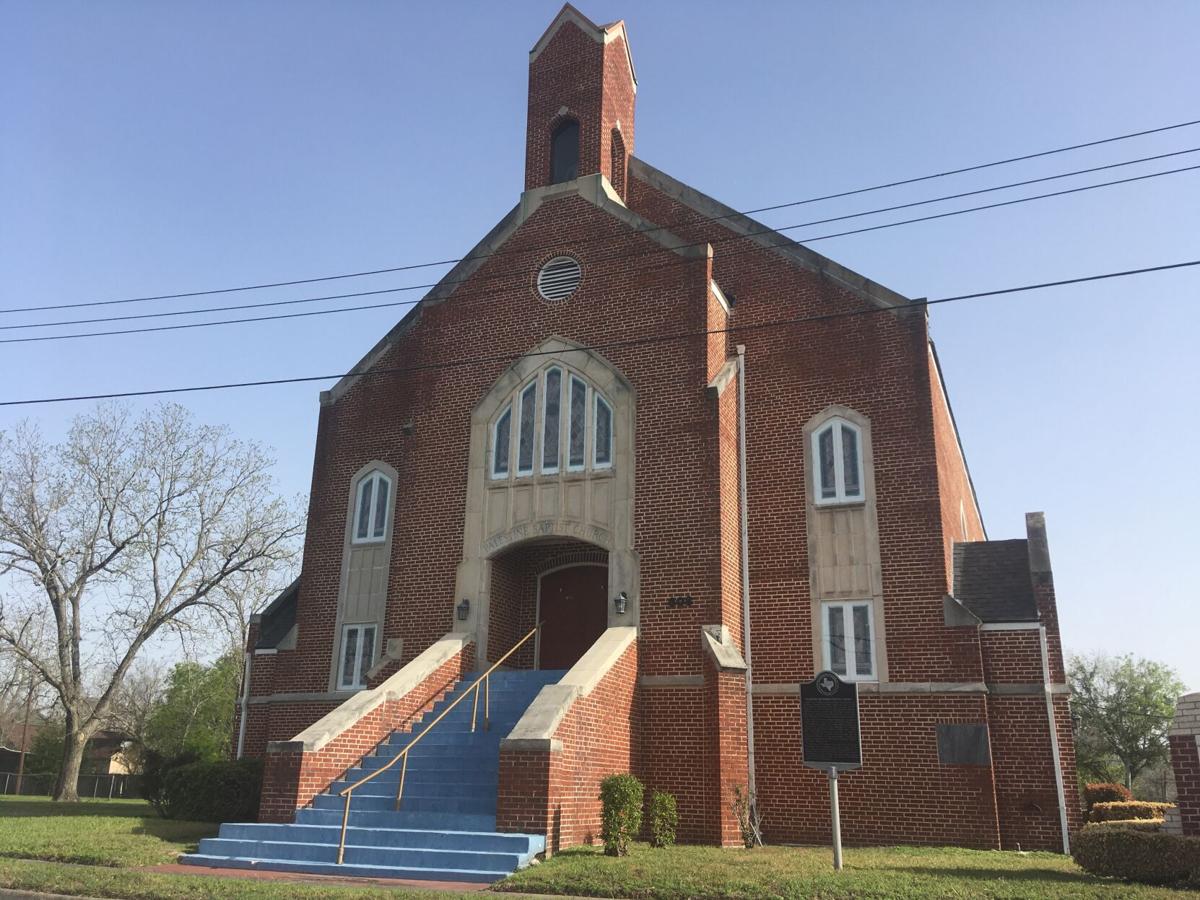 The Palestine Missionary Baptist Church was built in 1953. 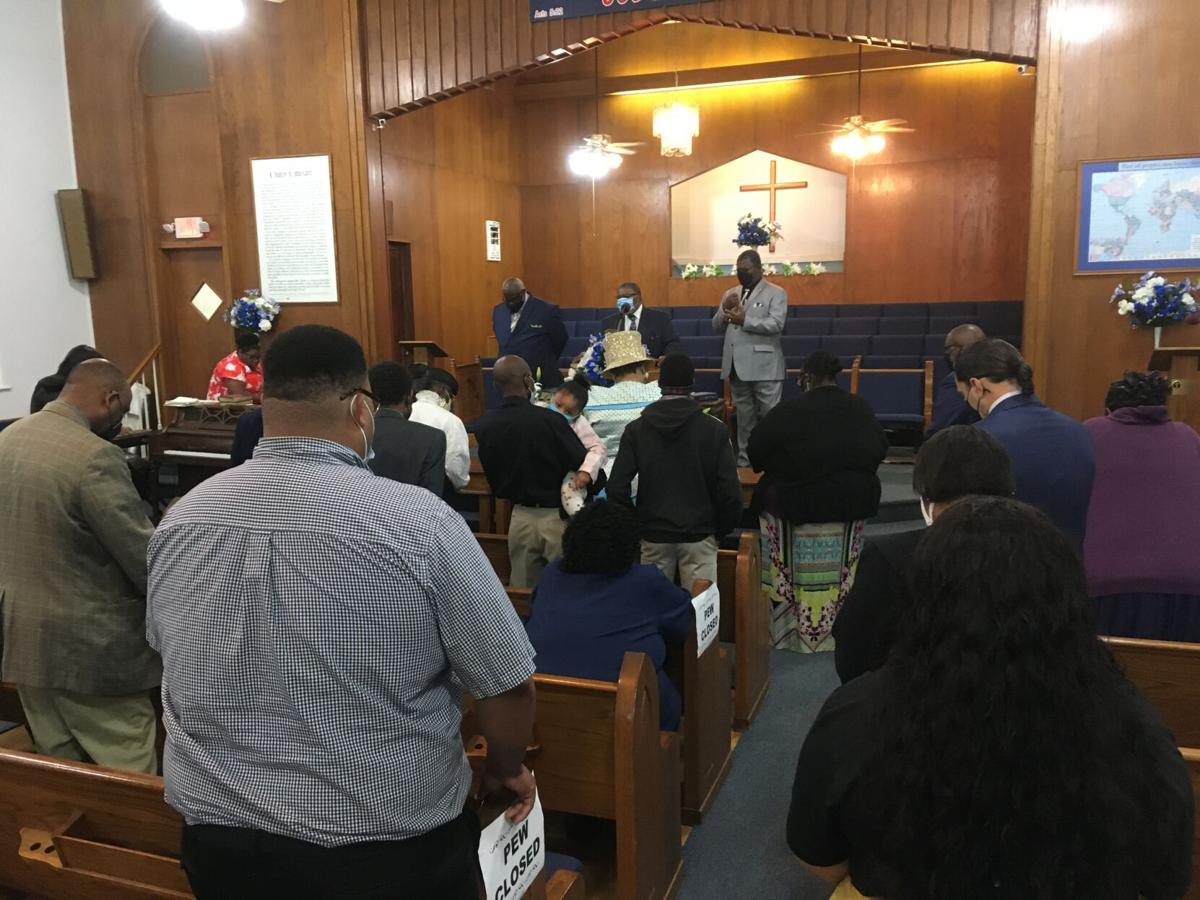 Members of Palestine Missionary Baptist Church gather to honor the Rev. Gregory O'Keith Wyatt and his wife Elaine Wyatt for their 26 years of service. 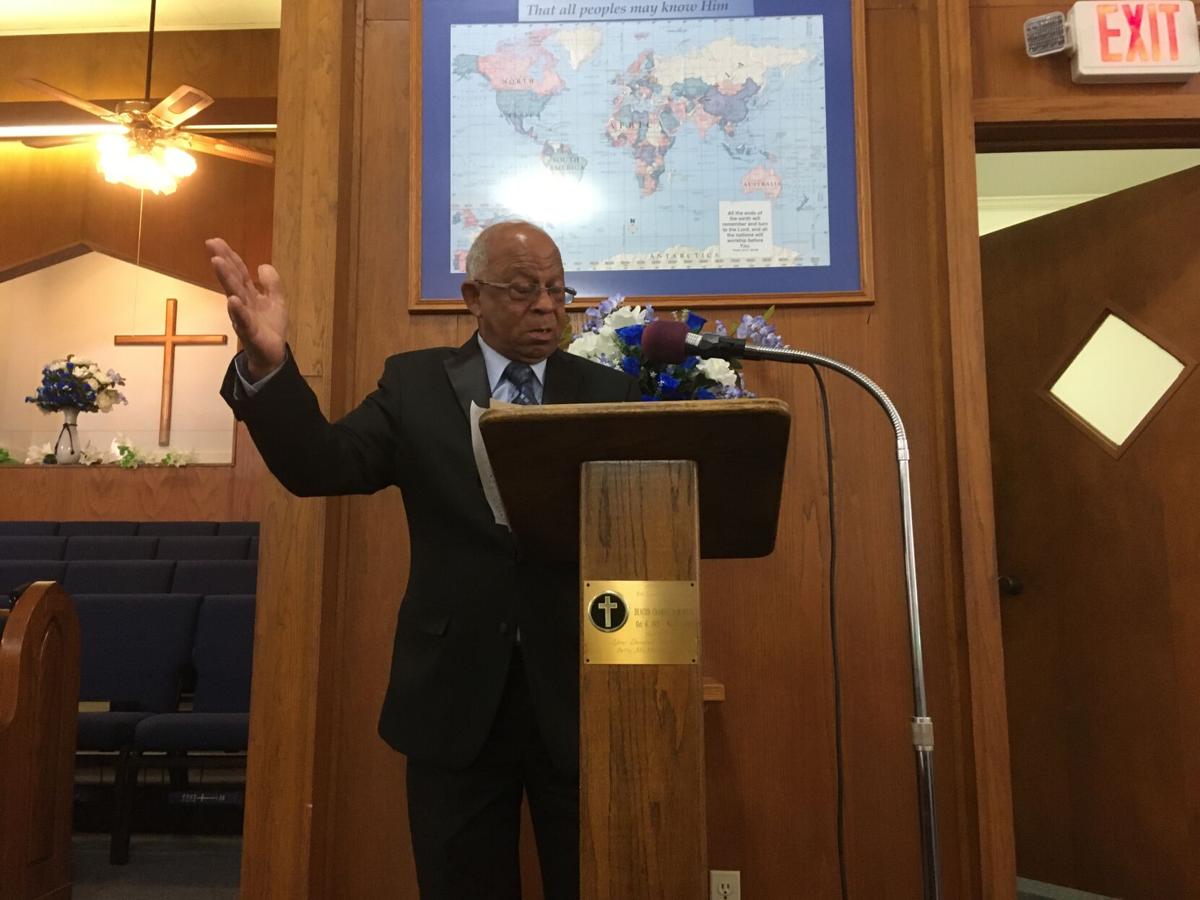 Deacon Alfred Williams delivers a tribute to the Rev. Gregory O’Keith Wyatt at a special service honoring the pastor and his wife for their service to Palestine Missionary Baptist Church.

The Rev. Gregory O'Keith Wyatt and his wife Elaine Wyatt enter the Palestine Missionary Baptist church during a service honoring them on March 14.

The Rev. Gregory O’Keith Wyatt and his wife, Elaine Wyatt, attend a service in their honor at Palestine Missionary Baptist Church on March 14.

The Palestine Missionary Baptist Church was built in 1953.

Members of Palestine Missionary Baptist Church gather to honor the Rev. Gregory O'Keith Wyatt and his wife Elaine Wyatt for their 26 years of service.

Deacon Alfred Williams delivers a tribute to the Rev. Gregory O’Keith Wyatt at a special service honoring the pastor and his wife for their service to Palestine Missionary Baptist Church.

On June 27, 1869, Palestine Missionary Baptist Church was organized by 21 men and women of color who were former slaves. They met under a tree on the block where the current church stands. The Rev. Mitchell Harrison was the first pastor of what is now one of Victoria’s oldest churches.

“We have very faithful, strong Christian men and women, and we walk and stand on the shoulders of the ones before us who built this church under strong leadership,” said Margie Montgomery, 72, a member of the church since 1990.

Before the Palestine Baptist Church congregation had its own building, the members worshipped in the Brown’s School, which was across the street from the current church at the corner of Depot and Convent streets. Services also were held at the Frazier School a couple of blocks away.

The original, permanent frame church, constructed from salvaged wood following the hurricane in Indianola, was built at the corner of Navarro and Convent streets on Sept. 11, 1886. The church served the congregation for 67 years. In 1953, the existing brick church with its art glass windows and beautiful architectural details was built for $125,000 at the corner of Convent and Depot streets. On Nov. 23, 1958, the congregation finished paying for the building and the “mortgage was burned.” The parsonage, which was constructed in 1964 for $20,000, now sits where the original wood-frame church was.

Recently, on March 14, the congregation celebrated the Rev. Gregory O’Keith Wyatt’s 26 years of service to the church. Members also honored his wife Elaine Wyatt. Wyatt, 62, is the 10th pastor of the historic church, where he started in 1995.

“He (Wyatt) has a very strong Christian background and works hard doing the work of the Lord,” Montgomery said. “He’s a strong Bible teacher and preacher, and a blessed family friend to all the members, a loving pastor, and prayerful. He shoots straight from the hip from the Bible.”

Fleming McMurray, 67, who has been a member of Palestine Missionary Baptist for at least 50 years, said God alone is responsible for the longevity of his church.

“Believing in Jesus Christ, his grace and mercy, has kept us going all these years, not anything man can do,” McMurray said. “We give all glory to God and not to ourselves. We are just instruments of his handy work.”

The church’s strength and accomplishments are not attributable to any individual, but rather to “the Father, the Son and the Holy Spirit,” McMurray said.

Wyatt continues to point church members toward the sustainer, and he speaks of being a living witness — not just talking about the word but living the word, he continued.

“People can look at your life and see that person is a believer because of how he treats others and how he acts in the community,” McMurray said. “As Christians, we need to live the life we learn, not just learn it and not live it.”

Deacon Fred Williams, 75, has been a member of the church, which he calls “a loving family,” since he was a boy. He said Wyatt brings a good understanding of the word of God to his congregation.

“When we go out, we know how to talk to someone,” Williams said. “If someone asks you to pray for them, don’t wait until you get home, do it right then. He taught us how to do this.”

He received his call to the ministry in 1975.

“It’s a great desire that God places on our hearts, to stand for him and to give the great testimony of truth about him and his work in your life,” Wyatt said.

Wyatt said he felt great affection from the congregation when he arrived in Victoria. Although some of those members have died, they are still with him in spirit and love.

The church has about 120 members.

Wyatt listens in his life-touching ministry for how God wants his people to prosper. He wants to make Jesus known to every man, woman and child.

“I enjoy the great desire to help people, to feel the great need of what we accomplish, to touch the lives of so many people, so many young people,” Wyatt said. “I’m blessed to do that.”

The Women’s and Men’s Ministries still are active in praying for people and taking telephone calls from people who are in need of help during this pandemic. The other ministries, like everything else that involves personal contact, have been suspended for the time being. Those ministries include a nursing home ministry, nurses’ ministry, bus outreach ministry and ushers’ ministry, among numerous others.

Palestine Baptist Church still is in need of repairs after Hurricane Harvey. The congregation was meeting temporarily at Webster Chapel United Methodist Church followed by Our Saviour’s Lutheran Church before they finally moved back home in January 2020. The downstairs kitchen and classroom still need work.

“Yet, through all that, we have a strong Christian faith, believers and pastor, and we’re still coming along,” Montgomery said. “We’ll get back to where we were someday.”