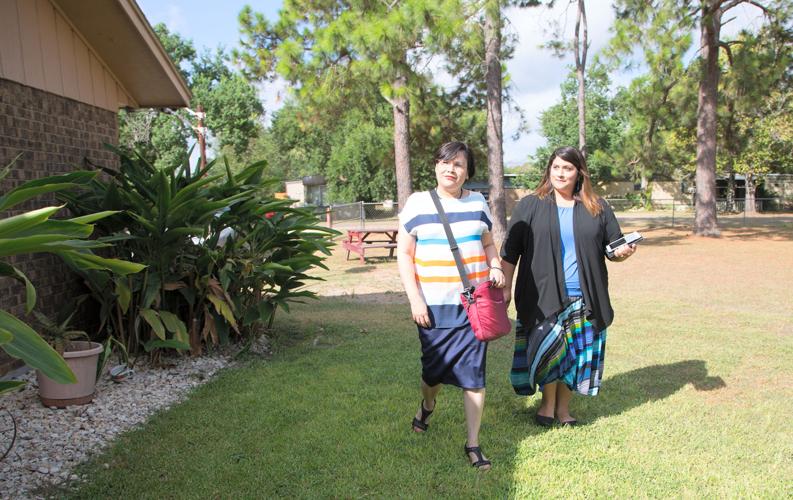 Eva Hernandez, left, and Christina Brubaker approach the door of a home in Victoria to hand out a brochure about a free upcoming sign language event.

Elder Harold Harper, left, and Jeff Odom are members of the American Sign Language team at Kingdom Hall of Victoria. They discuss a brochure about a free upcoming sign language event in Krum from Aug. 19 to 21. There are 27 members of the ASL team. 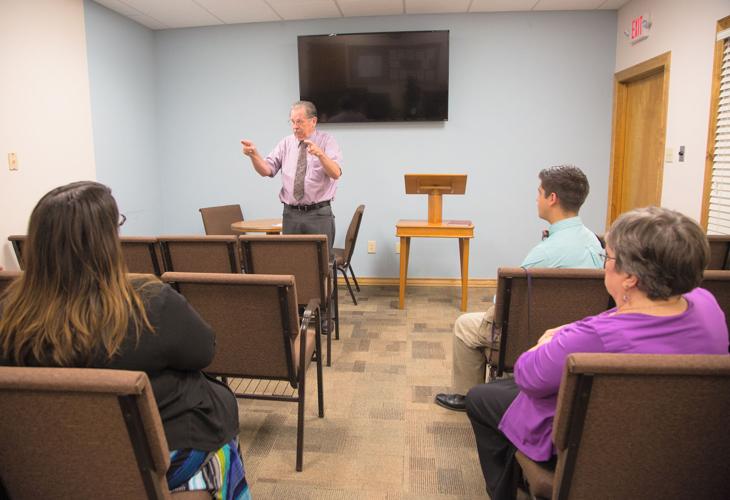 Eva Hernandez, left, and Christina Brubaker approach the door of a home in Victoria to hand out a brochure about a free upcoming sign language event.

Elder Harold Harper, left, and Jeff Odom are members of the American Sign Language team at Kingdom Hall of Victoria. They discuss a brochure about a free upcoming sign language event in Krum from Aug. 19 to 21. There are 27 members of the ASL team.

Jeff Odom sits comfortably at a table with other members of his Jehovah's Witness community and remembers what it was like growing up deaf.

Using American Sign Language to recall his first encounter with a pair of Witnesses at his door nearly 20 years ago, he smiled.

"He was happy and enjoyed the conversation," said Harold Harper, translating for the 43-year-old Odom. "He was happy someone could sign to him."

Odom, who grew up Catholic and attended St. Mary's Church, said he had long yearned to learn more about God.

"I wanted to be a preacher," Odom signed, mentioning each time he went to Mass there was never an American Sign Language interpreter.

But with limited resources for the deaf community within area Christian communities, Odom's dream began to dissipate.

That is, until the Witnesses showed up at his door, apt with the ability to speak in whatever tongue needed to communicate the Bible.

What started as weekly house visits turned eventually, over a period of about 10 years, into a conversion and baptism into the Jehovah's Witness community.

"I just liked what I was learning," said Odom, who was about 20 years old when he was introduced to the faith.

Odom said after all these years of learning the Bible and culture of the Witness community, he doesn't think he would have been persuaded if another religion approached him at home also capable of speaking ASL.

When he's not working during the week as a dishwasher, he attends Witness meetings for the deaf and leads readings and discussions each Friday. It's one of five Victoria Witness congregations, but there are many other Kingdom Halls and Witness communities throughout the Crossroads, in Refugio, Gonzalez, Goliad, Port Lavaca and Cuero, among others.

Harper, who learned American Sign Language out of necessity when a deaf family began attending his Kingdom Hall in Engleton years ago, said there are 197 documented deaf people in the Crossroads.

"They're all ages, and some have never learned ASL. Some only know home signs," Harper explained. "We'll teach them ASL and the Bible at the same time."

Witnesses, Harper explained, are prepared to speak to anyone in any language with the touch or swipe of an app.

Today, Witnesses use tablets when they go out, featuring a communication method for anyone, and an array of Bible lessons pre-downloaded.

Without this, Harper said, people like Odom would be forgotten.

"That's why I left," said Odom, who felt for years that his hearing disability lead others to leave him on the theological outskirts.

Going door-to-door and performing acts of public ministry is the trademark of Witnesses. Literature and technology is always current, and Witnesses spend hours each week both roll playing how they will go out in the community and then spending time on the streets.

They also attend two weekly meetings that are about two hours each. Meetings, not church, Mass or service.

Elders are raised to preside over each community, but there is no clergy. They are only committed attendees who are ready by the time they're baptized into the faith to evangelize in the community.

And throughout the world of millions of Jehovah's Witnesses, technology has made their task easier, especially in non-English speaking communities.

"We are definitely up on technology, and we're current on all the trends," said Elder Michael Camacho, of Victoria, mentioning the many languages the app allows them to speak to people they may encounter in the community.

Camacho's wife, Leslie, considered a Regular Pioneer, spends 70 hours each month in an organized and previously-decided-upon territory evangelizing in Victoria. That's after and before her regular day job. Auxiliary Pioneers, as they are called, will spend 50 hours a month evangelizing.

The Witnesses are aware their presence at others' doors may be inopportune at times, but they said they are never there to convert. They are only spreading the good news of the Bible.

"What they do with the information after that is up to them," said Witness Angela Contello. "We're only there to tell them."

Contello's husband, Mike Contello, also an elder, said spreading the word of God can be difficult at times. He's been chased away by people threatening to shoot him if he doesn't get off their property.

But Contello said Witnesses are never present to disturb anyone and will never argue if anyone does not want them there.

They see themselves as deliverers of a message, rather than collectors of congregants.

"We understand there are a lot of shift workers in the area, and day sleepers and we always try to look for signs of that, so as not to disturb anyone," Leslie Camacho said. "But 80 percent of the time, people are glad to take the literature."

She also said about half of the people she talks to want to talk longer about her message, and a small percentage of those will seek out future visits.

The Witnesses, who are often considered a fringe group of Christianity, said they have differences in the way they practice their faith, but base their practice on Holy Scripture. They acknowledge Jehovah, or the God of the Old Testament, as above Jesus, while still considering Jesus the messiah. They also do not celebrate birthdays or government, patriotic or religious holidays and do not participate in the military or take part in the Pledge of Allegiance.

God's is the first and only kingdom they pledge allegiance to, and before man, country, or self is the command of Jehovah to go out and make disciples of the world.

"We're not trying to search for members. We're not there to convert. We're giving them good news," Angela Contello said.

Echoing that statement, Mike Contello said, "They're not rejecting us, we're just there with a message."

Odom, who said he is now completely settled into the deaf ministry, is content where God has led him. He knows other deaf people will hear the Bible because of the Witnesses and their passion for evangelizing, and maybe someone else like him will not be left behind.

"Other religions ignore us," he said. "Only the Jehovah's Witnesses took the time to teach me."

Jennifer Preyss-Mathlouthi is an award-winning faith writer and columnist.