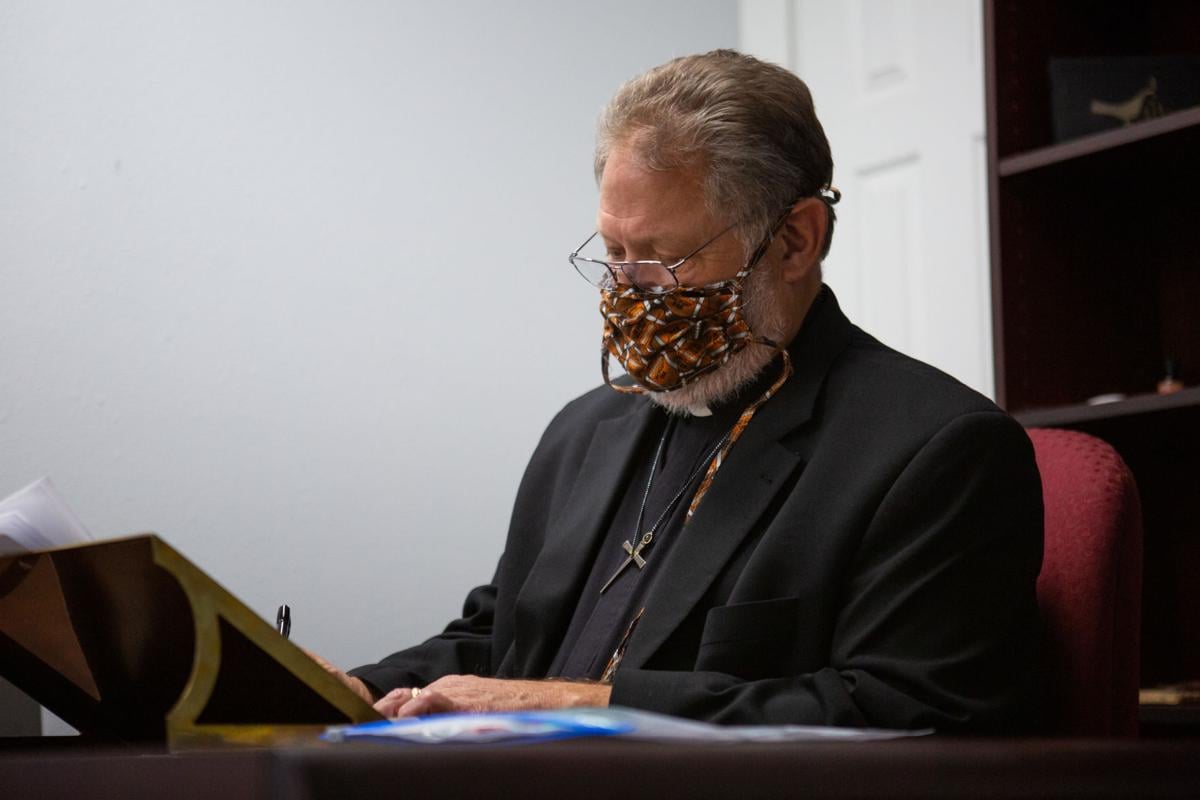 The Rev. Herb Beyer sits at a desk in the office at Zion Lutheran Church in Moulton to finish preparing his sermon before recording it. 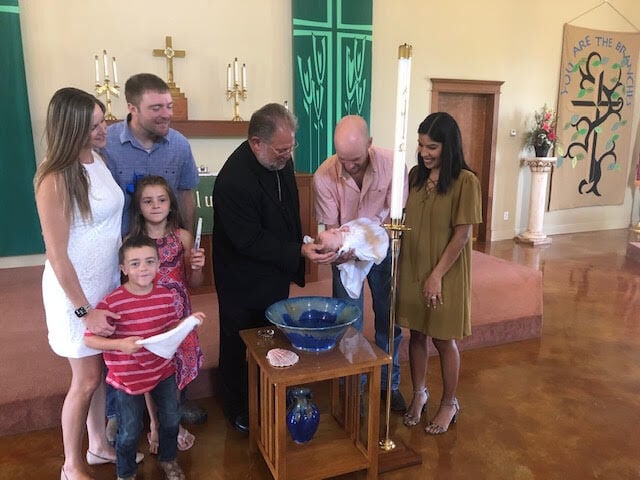 The Rev. Herb Beyer officiates at recent baptism of Ember Jo Pesak at one of the five congregations he serves — Faith Lutheran Church in Weimar. Beyer has baptized all three children of Courtney and Aaron Pesak, officiated at the Pesak’s wedding, and instructed Courtney Pesak when she became a member of the church. 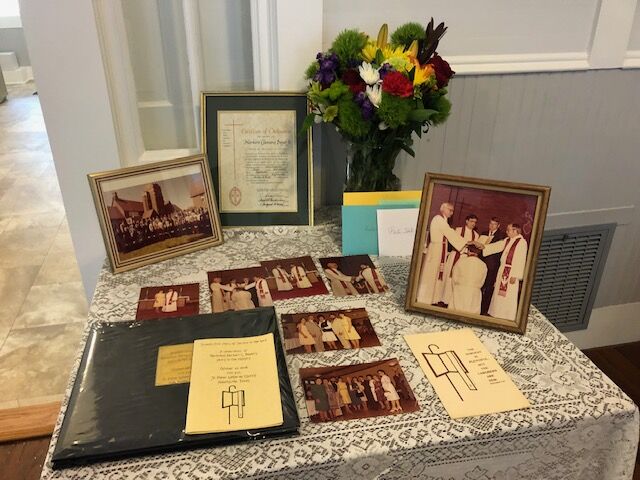 A table set up at a surprise party held Sept. 12 at Zion Lutheran Church in Moulton for the 40th anniversary of the Rev. Herb Beyer’s ordination.

The Rev. Herb Beyer sits at a desk in the office at Zion Lutheran Church in Moulton to finish preparing his sermon before recording it.

The Rev. Herb Beyer officiates at recent baptism of Ember Jo Pesak at one of the five congregations he serves — Faith Lutheran Church in Weimar. Beyer has baptized all three children of Courtney and Aaron Pesak, officiated at the Pesak’s wedding, and instructed Courtney Pesak when she became a member of the church.

A table set up at a surprise party held Sept. 12 at Zion Lutheran Church in Moulton for the 40th anniversary of the Rev. Herb Beyer’s ordination.

The Rev. Herb Beyer is an organizer.

As a Lutheran pastor, he has helped to unite five churches in three counties under the umbrella of the Tri-Cooperative Ministries.

This year marks the 40th anniversary of Beyer’s ordination in the Lutheran church, and he has spent all of those years serving God, rural churches and communities in this area.

Beyer earned his bachelor’s degree from the University of Texas in San Antonio and his Master of Divinity degree from Trinity Lutheran Seminary in Columbus, Ohio. He was ordained Sept. 13, 1981, in his home congregation of Hope Lutheran Church in San Antonio.

Retired Bishop Ray Tiemann, of Fredericksburg, who served the Southwestern Texas Synod of the ELCA Congregations from 2000 to 2018, applauded Beyer’s ability to get all of the churches to work together toward a common mission. He called the accomplishment a challenge that takes a special person because congregations tend to want to do things their own ways.

“He came up with the idea for the congregations to work together and be partners, and that has continued for a number of years now,” Tiemann said. “He has a good, strong pastoral heart, and one of his greatest strengths is doing congregational ministry.”

Beyer said statistics show that clergy across all churches are getting older, and fewer are going into ordained ministry. Seven out of 65 members in Beyer’s seminary class came to Texas. At the age of 66, Beyer is the only one who is not deceased or retired. The cooperative ministries model has enabled smaller churches to stay open when pastors are unavailable or churches cannot afford to pay full-time pastors.

“It gives me joy that churches don’t have to close, that they work together in a cooperative model,” he said. “And others are developing them in our senate.”

Martha Maloney, 68, who has been a member of Zion Evangelical Lutheran Church in Sublime all her life, said Beyer came to the church when they needed a pastor and basically, along with the work of many others, kept their doors from closing.

“He has set quite an example of how little churches can work together to keep things going when not a lot of pastors are available,” Maloney said. “He’s just a good man who sets a good example, and he’s a great organizer who knows how to get people to work for God. It’s just a privilege to have him as our pastor because of his ability to work for, befriend and care for people. He’s a good and faithful servant of God, and I appreciate that.”

Beyer and his wife, Lisa Gail Breland Beyer, live on a farm near the Hackberry community where they raise Dexter cattle and enjoy organic gardening. They have one son who is married with three children. Beyer’s wife was a chemical engineer with Dow Chemical until her recent retirement.

After nearly 45 years of marriage, Beyer still adheres to four driving principles introduced to him by his wife — faith in Jesus and involvement with the church, family and friends.

“It’s not about things. It’s about relationships, and she has remained constant to that all the time I have known her,” Beyer said. “You can have lots of stuff, but who in the end is there for you.”

“That’s our purpose — what does God want us to do with our lives — and I try not to waste those moments,” he said.

Having good working relationships with leaders — men and women of all ages — has allowed the churches that Beyer serves to thrive. He said that the work accomplished by churches does not result from one person but rather partnerships between many. He gives out his cellphone number and invites people to call him at any time.

Beyer said conflicts are inevitable, so he is thankful that they have not arisen much in his work.

“Jesus gives us a way to remove conflict, and in the end, the result is friendship and understanding,” he said. “God shows up for all of us all of the time, and that’s one thing we need to do — show up.”

Beyer shows up and takes care of people during both joyous and difficult times. While he does not necessarily enjoy presiding over funerals, he hears compliments about those services. His goal is to provide an uplifting celebration of life.

“I help in living, dying and living again — living forever with God,” he said.

Connecting or reconnecting people to the church brings Beyer much joy. This has been especially true during the pandemic, which has been difficult for many people. He enjoys bringing them the presence of Christ so they can experience hope, joy, love and peace even when everything around them seems to be going wrong.

“I find ways to be there for people and encourage them,” he said.

Beyer encourages people to read the Scriptures and take time to pray to grow in their faith. He emphasizes the importance of staying connected to Jesus Christ, the cross and the church.

“The church is a divine creation made up of sinful human beings,” he said. “We are all chipped or cracked in some way. We all have skeletons. We don’t make judgements about anybody. We pray for them and encourage them.”

The church can serve as a model for troubled and conflicted people and institutions as well as the country and world, he said.

“We pray, encourage, love and forgive, and we learn to put up with one another,” he said. “It’s not that we don’t have differences, but when we have conversations, we make them civil ones. We don’t pour gas on the fire.”

He said people need to bring the calmness of Christ to all of the issues facing the world today. He continued that the country can learn from the example of the church and the principles Jesus provides on ways to deal with each other in relationships.

“You need to take what you get in the sanctuary out to the world,” he said.

Carrie Rerich, 39, who has been a member of Faith Lutheran Church in Weimar all her life, said she appreciates the way Beyer relates his real-life experiences to the gospel when he preaches. He inspired Rerich to serve the church more by building a relationship with her.

“He’s a good friend, and I can talk to him about anything,” Rerich said. “I think that when you have a close relationship with the pastor, you feel more at home in the church.”

Furthermore, she applauded his dedication to not only her congregation but all the congregations in the cooperative ministries.

Barbara Grindeland, who has been a longtime member of St. Peter Lutheran Church in Hallettsville, said Beyer is a servant, leader, teacher and preacher of the Gospel who attempts to meet the needs of all people — those in the church and the community. He cares about the significant challenges and joys in people’s lives, not just about their mission or service in the church, she said.

“He is interested in the person as well as the faith development,” she said. “He’s available and accessible, and his willingness to be present and share compassion are some of his strengths.”

Rick Denton, who has been a member of St. Peter Lutheran Church in West Point for about five years, said Beyer talks and worships in ways that make people want to listen to him.

“I don’t know of anyone who doesn’t want to be around him,” Denton said. “His whole life is with God and Jesus, and that’s the whole point of everything he does.”