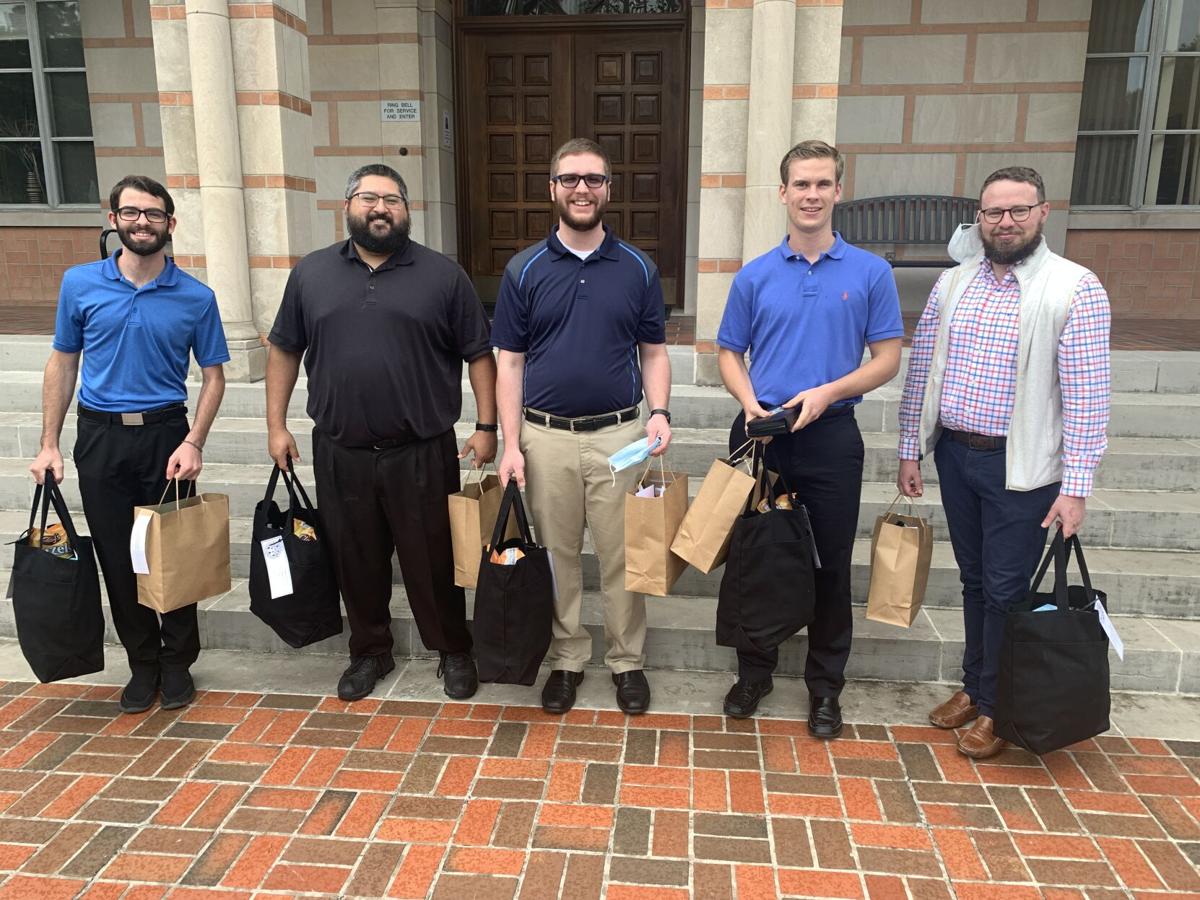 Seminarians at St. Mary’s Seminary in Houston, are, from left, Philippe Dubourdieu, Aaron Padilla, Joseph Blackburn, Caleb Krischke and Shane Goertz. In the fall, the seminarians received gift bags from the Serra Club of Victoria. 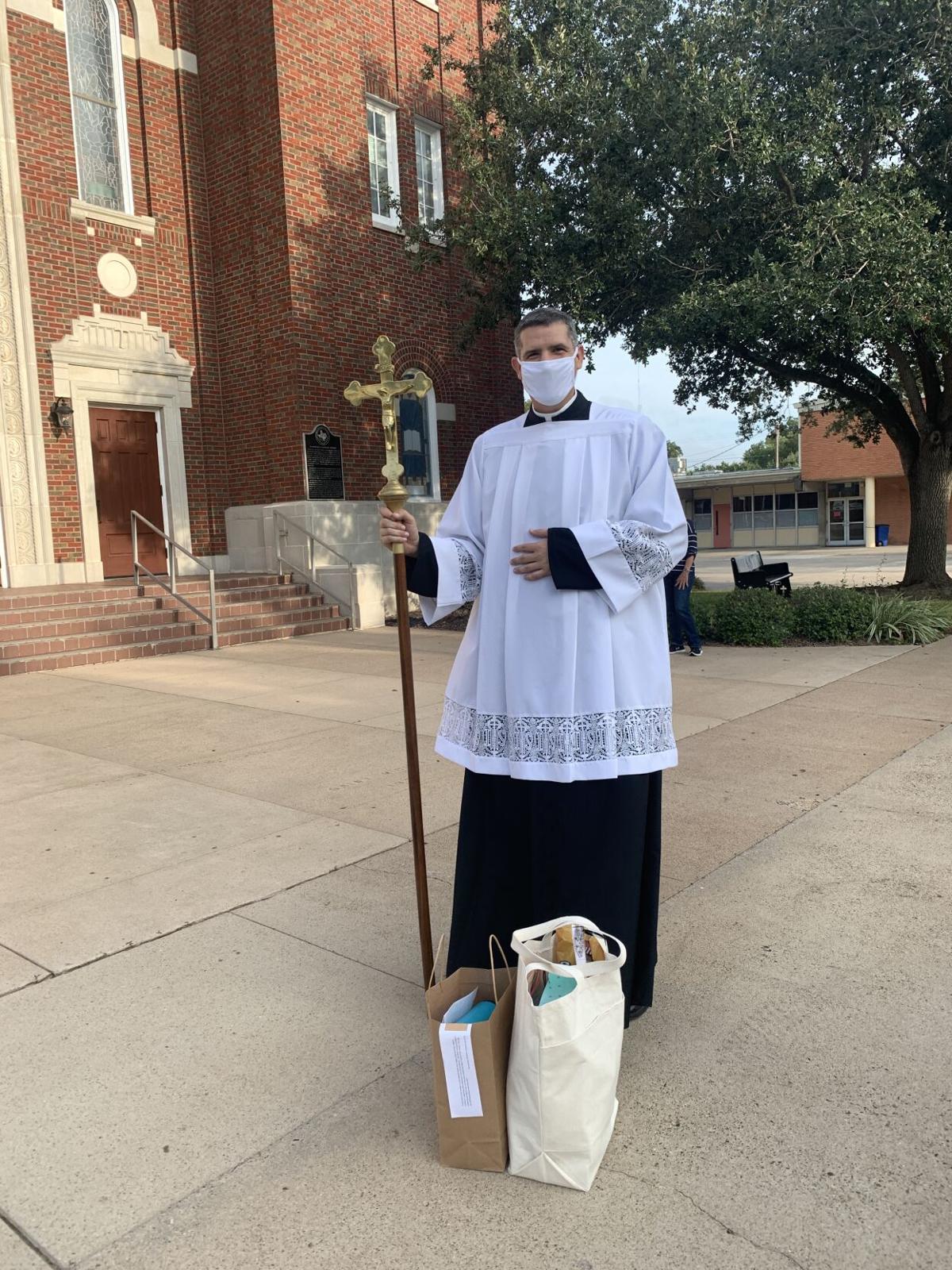 Luke Prihoda, who is serving in his pastoral year at St. Michael’s Church in Cuero, was presented with his gift bags outside the church after a weekday Mass. 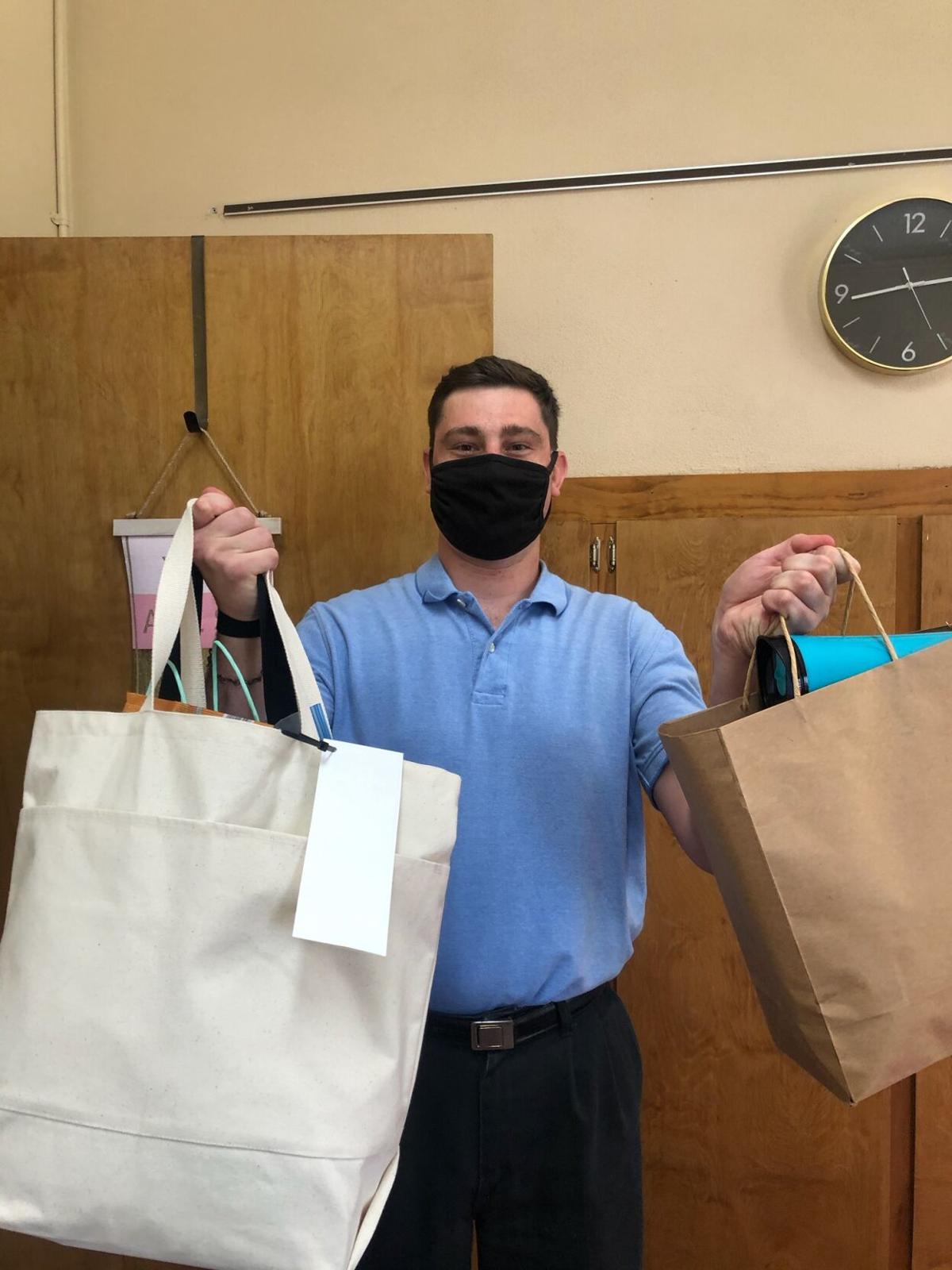 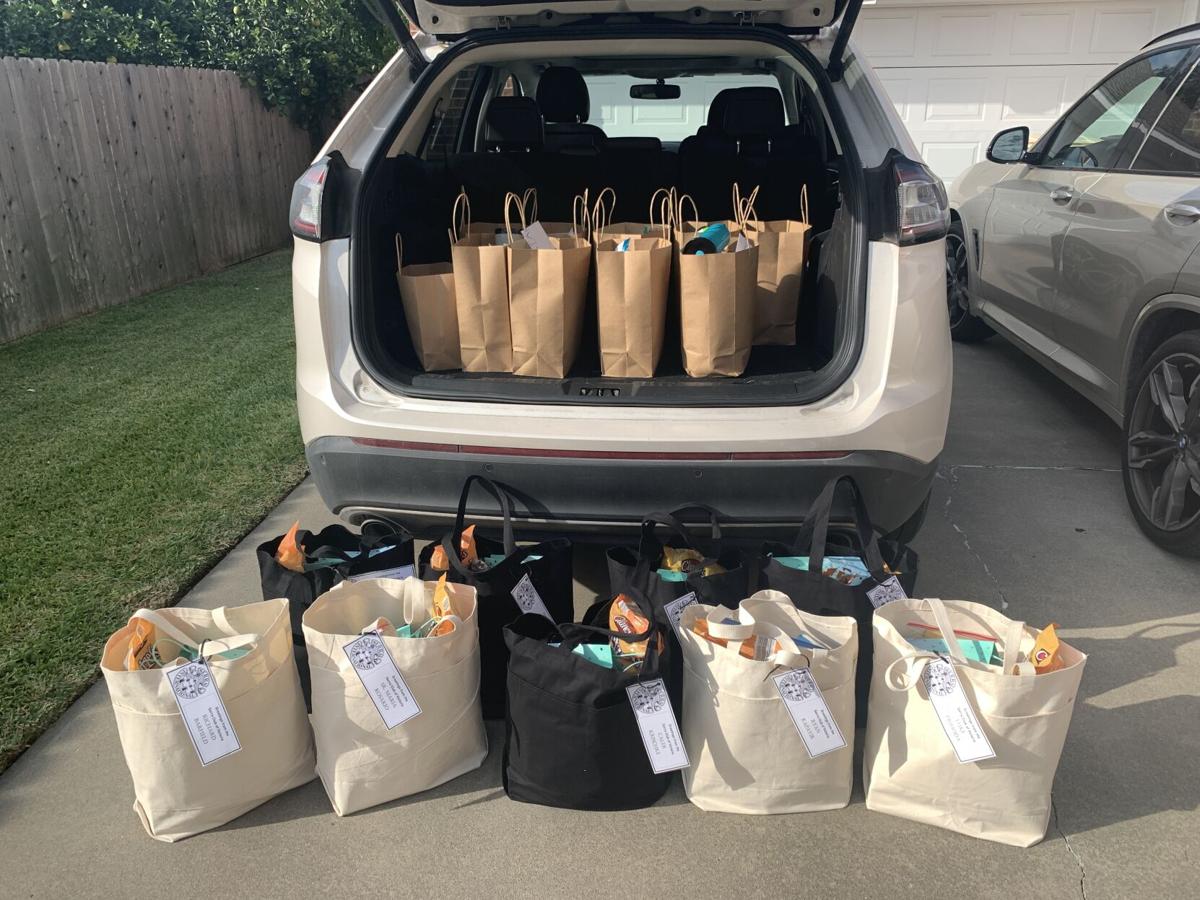 Gail Janecka, president of the Serra Club of Victoria, loads her car with gift bags for the seminarians and religious-in-formation.

Seminarians at St. Mary’s Seminary in Houston, are, from left, Philippe Dubourdieu, Aaron Padilla, Joseph Blackburn, Caleb Krischke and Shane Goertz. In the fall, the seminarians received gift bags from the Serra Club of Victoria.

Luke Prihoda, who is serving in his pastoral year at St. Michael’s Church in Cuero, was presented with his gift bags outside the church after a weekday Mass.

Gail Janecka, president of the Serra Club of Victoria, loads her car with gift bags for the seminarians and religious-in-formation.

For the Rev. Patrick Knippenberg, associate pastor at Holy Family Catholic Church, the Serra Club of Victoria was a God-send during the years he spent at St. Mary’s Seminary in Houston. He now serves as chaplain for the local club, which is one of the largest in Texas with more than 90 members.

The Serra Club, named for Saint Junipero Serra, is an international organization of lay Catholic men and women who support vocations to the Catholic priesthood and religious life. More than 1,100 Serra clubs have been chartered in 46 countries around the world. There are more than 20,000 members worldwide.

Members of the Serra Club offer their prayers and support for the Victoria diocese seminarians and religious-in-formation as well as the local priests, deacons and sisters.

Knippenberg appreciated the notes of encouragement and financial support sent to him while he was a seminarian. At one point, the financial support helped him to keep his car running so he could get to his various ministries in Houston.

“They send us notes to keep us in good spirits. When you’re in the seminary, at some point, you’re by yourself and you wonder if anyone is behind you. There are moments in your studies when you feel like you’re on your own, and through sending cards and letters, they remind us that they are praying for us, cheering us on to keep us going for the diocese, and we’ll be there for them when we get out,” Knippenberg said.

In their support, members of the Serra Club serve as surrogate parents or partners for seminarians, Knippenberg said. When seminarians are in town, they are invited to speak at local Serra Club events.

“We come to talk to 100 people and realize we are doing something for the community, which is reinforcing when we are feeling weak in our vocation. In the seminary, you wonder if this is the right thing, and the Serrans keep that positivity going for us — that confirmation that we are in the right vocation here to serve the people of God when we are ordained one day,” Knippenberg said.

Knippenberg was ordained in 2012 and still remembers the generosity of the Serrans, which he described as “very much needed.”

The Serrans also spot those who might be a good fit for religious life and encourage them to consider the vocation. Many feel the calling but are not quite sure, Knippenberg said. All they need is for one person to encourage them.

Ryan Kapavik, a seminarian who is spending a year at St. Mary’s Catholic Church in Victoria as part of his formation, said the Serrans always send him cards for his birthday, Christmas and other special occasions.

“It gives me purpose to what I am pursuing. Even when I’m at the seminary, I know that these people are supporting me, and I hope to minister to them one day,” Kapavik said. “They give me encouragement to continue to move forward in my vocation. Knowing they are giving me support for my vocation means the world to me and all seminarians. The people in the diocese are committed to praying for us and helping us on our journey.”

Valeria Dubourdieu’s son Philippe Dubourdieu is in his fifth year at St. Mary’s Seminary in Houston. She had never heard of the Serra Club until she and her husband were invited to a meeting with their son.

“It’s a huge group of people who have a call to support and pray for our sons, and to me as a mother, it has been the most amazing gift. It comes from such a place of love. I’m in awe to realize this special group is committed to praying for my child. It felt like he was wrapped in the arms of all of these people,” she said.

Gail Janecka, who has been a member of the Serra Club of Victoria since 2011, is serving in the second year of her two-year term as president.

“That prayerful support is a fundamental connection for everyone in the Serra Club across the world. There are different versions of the ministry, but we all focus around supporting religious vocations,” Janecka said. “We are an international organization of men and women who support priests, deacons and sisters worldwide to create a culture of vocations that is vital to the future of the church.”

Before the pandemic, members of the Serra Club met the first and third Fridays of every month for a meeting that included a Mass, meal and program. Socials throughout the year included a sisters’ cookout at Incarnate Word and Blessed Sacrament Convent, a priests’ steak dinner, a seminarians’ cookout, a deacons’ dinner and a Christmas party with seminarians and religious-in-formation.

Most recently, members of the Serra Club collected items including snacks, toiletries, gift cards and handwritten notes for gift bags for seminarians, both those in Houston and those interning at local parishes as well as a sister-in-formation. A Serra Club couple who homeschools their six children recruited the children’s friends in their Catholic homeschool group to help write notes.

“God multiplies our efforts,” Janecka said. “And the children learned about the importance of vocations.”

Janecka emphasized that her prayerful support of vocations is part of her own vocation.

“There is a daily prayer that many Serrans are dedicated to reciting daily, and it’s a neat experience to join in prayers with people all over the globe, to connect in that spiritual way with them,” Janecka said.

In Janecka’s faith life, membership in the Serra Club has fostered a deeper appreciation for priests and religious others.

John Stevenson, whose father was a founding member of the club, has been a member for 23 years.

“So there’s fellowship with other members and also a chance to get to know the religious in the church, the priests, the nuns, the seminarians and the bishops. By belonging, you get the chance to know those people probably better than most other ways,” he said. “It’s a chance to offer them encouragement and support and to show appreciation for them.”

John McQuillen has been a member of the Serra Club for almost 30 years. He has served on the USA Council of Serra International. In addition to supporting religious vocations, McQuillen finds being around the “good Christian people’’ in the club uplifting.

“So many of these young men go off to the seminary and a lot of them have support systems with family, but not all of them do. Even those who do (have support) need all the support they can get, and we pray for them,” he said. “Every one of them has told us how much that means to them as they go through this journey in their life.”

Oh God, who wills not the death of a sinner, but rather that he be converted and live, grant, we beseech Thee, through the intercession of the Blessed Mary, ever Virgin, St. Joseph, her spouse, St. Junipero Serra, and all the saints, an increase in laborers for Your Church – fellow laborers with Christ to spend and consume themselves for souls, through the same Jesus Christ, Your Son, Who lives and reigns with You in the unity of the Holy Spirit, one God, forever and ever. Amen