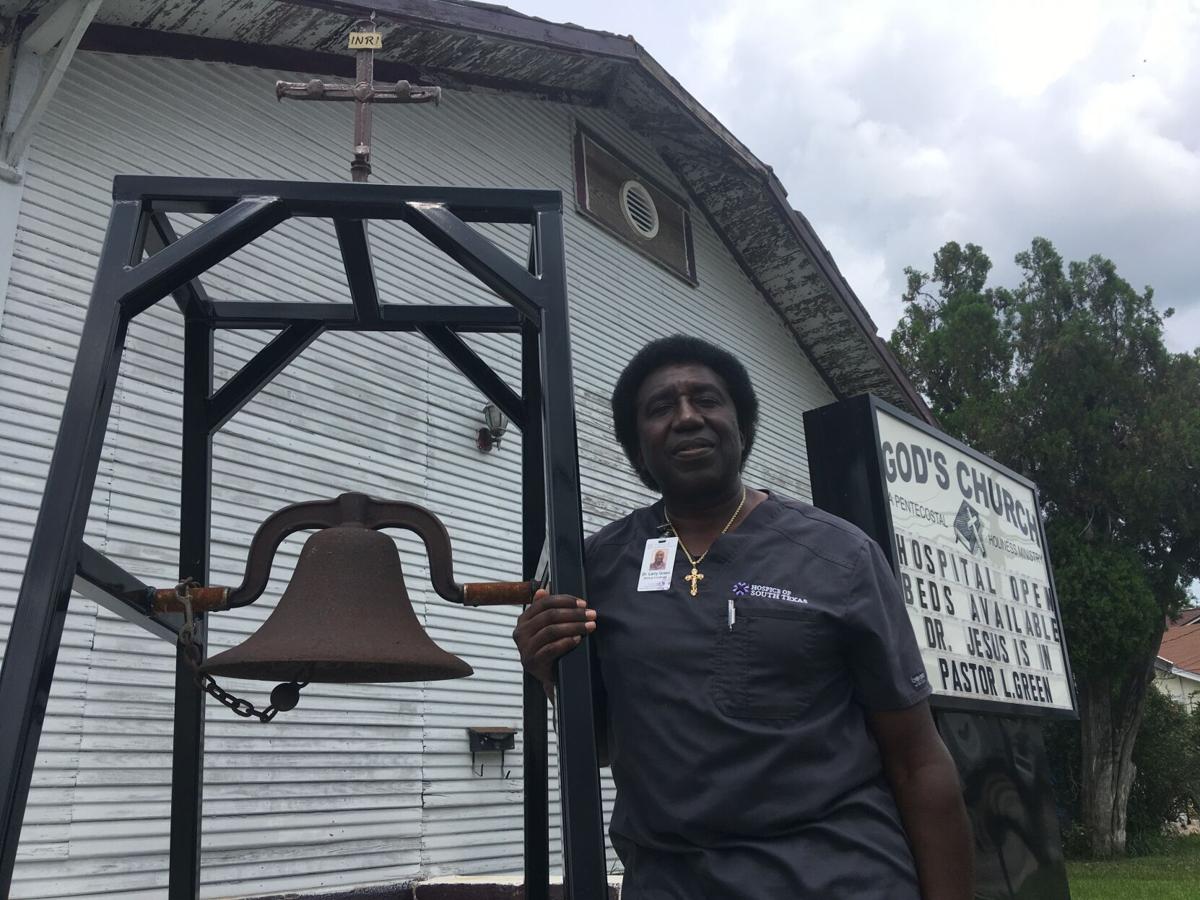 Pastor Larry Green with God’s Church of Restoration poses with the A.C. Bell that was erected in front of his church. 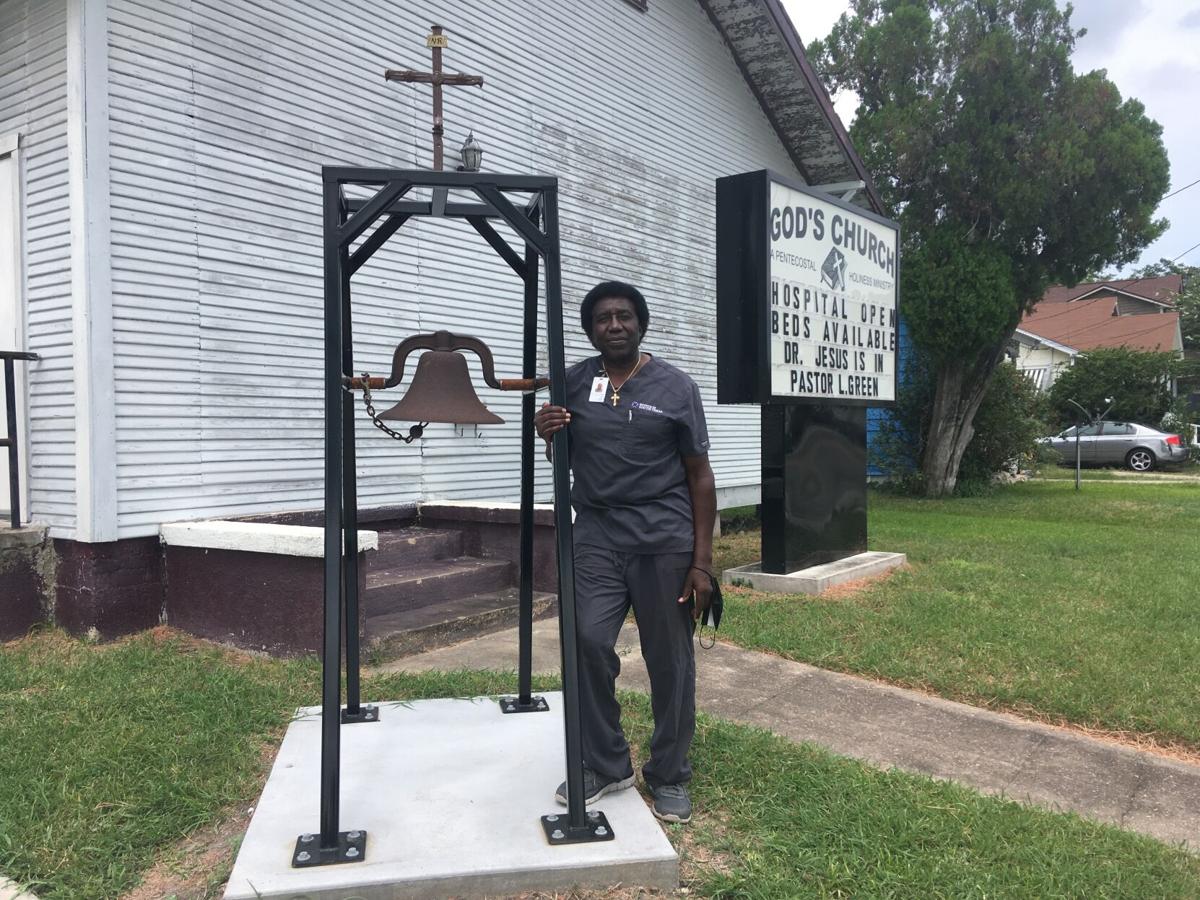 Pastor Larry Green stands next to the A.C. Bell, which will be dedicated at God’s Church of Restoration Sunday. 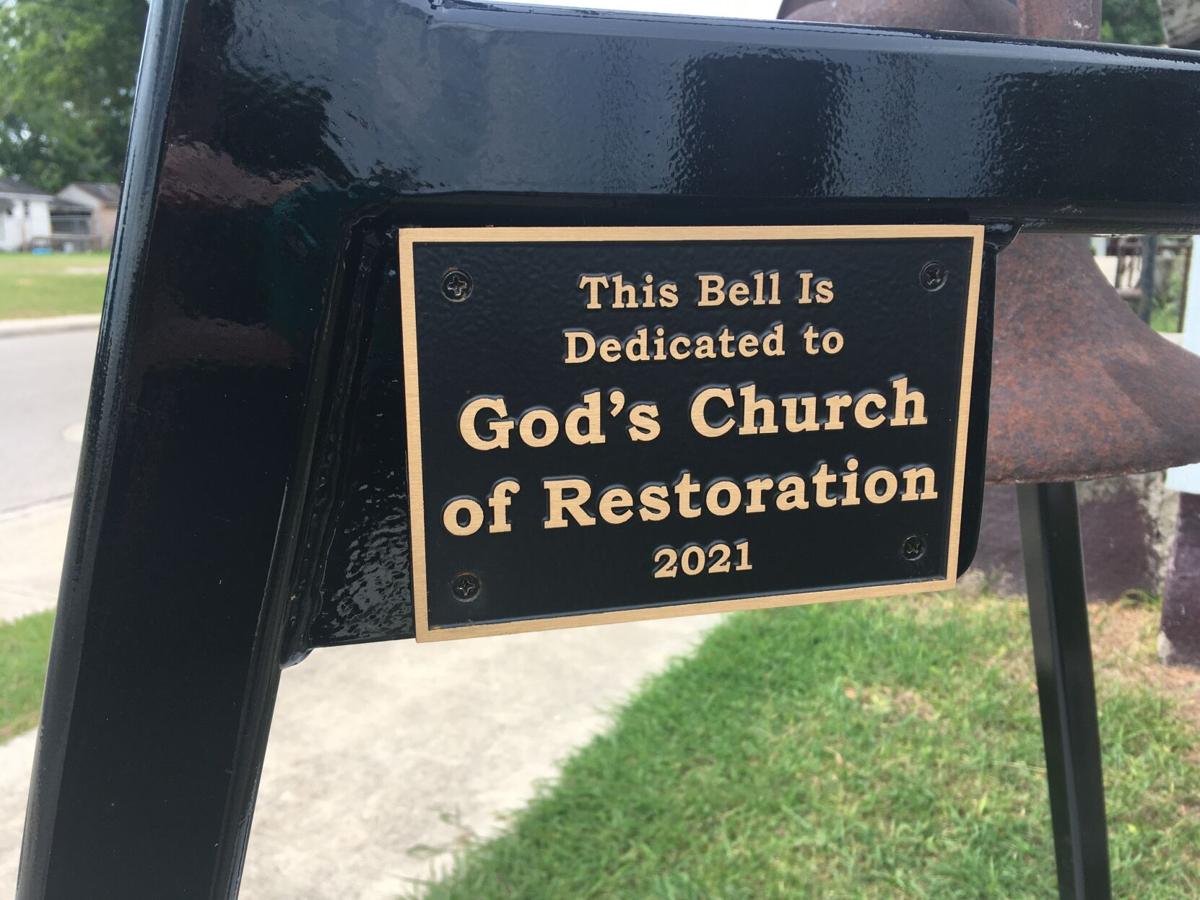 Kathryn Weber and her family had a plaque adhered to the A.C. Bell at God’s Church of Restoration.

Pastor Larry Green with God’s Church of Restoration poses with the A.C. Bell that was erected in front of his church.

Pastor Larry Green stands next to the A.C. Bell, which will be dedicated at God’s Church of Restoration Sunday.

Kathryn Weber and her family had a plaque adhered to the A.C. Bell at God’s Church of Restoration.

A church bell, which has been in one particular family for generations, has been donated to grace the grounds of God’s Church of Restoration in Victoria for many more generations.

The bell, which is estimated to be at least 150 years old, lived a storied life before ending up in the possession of Kathryn Weber, a Victoria resident who was reared in San Antonio.

Her great-grandfather, the Rev. Archibald Christopher “A.C.” Bell was born in Georgia and when he was young moved to Texas where his family introduced terrace farming to the area.

Bell eventually became a Methodist minister and married Mary Alford “Dollie” Hinds in 1903 in Tye. They had two daughters and one son also named A.C., who, like his father, became a minister.

Bell started his ministry in small towns of West Texas and eventually moved to larger churches in Fort Worth and surrounding areas. When he and his wife decided to slow down, they moved to a small church in the Texas Rio Grande Valley where they purchased a citrus orchard and farmland near Santa Rosa.

Upon retiring from ministry for good, Bell was given the church bell as a retirement gift.

In 1943, Bell’s wife was diagnosed with breast cancer and went to the hospital in Temple for a mastectomy. At that time, the surgery was considered radical and dangerous, Weber said. Bell feared for his wife’s life and told family members in the hospital parking lot that he could not live without her. At the age of 69, he died of a heart attack in his car during his wife’s surgery on Dec. 15, 1943. Dollie Bell survived the surgery and lived to be in her 90s.

Upon Rev. Archibald Christopher “A.C.” Bell’s death, the church bell was given to Bell’s daughter, Ruby Kendrick Bell Robbins, who cared for it from 1943 until 1983. The bell was then passed to Ruby Robbins’ daughter, Joyce Robbins Becker, and later to her daughter Kathryn Weber in 1993.

The bell moved with Weber and her husband Timothy Shull to North Carolina, Cuero and Austin before making it to Victoria in 2019. During that time, it lived in her yard and later in her garage.

Recently, Weber began thinking that she wanted to find a permanent home for the bell where it could be appreciated. She went to her neighbors, Mary Margaret and Monroe Rieger, devout Catholics, for help in finding that home. The Riegers volunteer for Hospice of South Texas where Pastor Larry Green is chaplain. They suggested his church, God’s Church of Restoration, as a permanent place for the bell.

Mary Margaret Rieger called Green an “awesome man.” She said that grateful families who belong to different churches often ask Green to preside over funeral services because of the comfort he provides them during difficult end-of-life times.

“I have had the great good fortune of moving next door to two of the most wonderful neighbors anyone could ask for. The best thing I’ve ever done is move to this corner of Victoria,” Weber said. “I knew that between the two of them, they could come up with the perfect place for a permanent home.”

Through loving and generous neighbors, the bell has found a loving and generous family, Weber said. She lauded Green for his positive influence in the community where he serves to comfort people at the end of their lives. Furthermore, she is glad to see the bell pass from one pastor and church to another.

“Pastor Larry Green is a generous and loving person filled with community spirit. It brings tears to my eyes to think the bell has gone from one family of love and generosity through loving and generous neighbors to a very caring group where it can be enjoyed,” Weber said.

Over the years, the bell’s clapper went missing, so Gene and Gail Pratka, owners of Gene’s Machine Shop in Victoria, fitted it with a clapper and welded a stand for the bell to which they added a cross on top. Mike and Cindy Bluda, owners of B&B Metal, poured the foundation in front of the church where the bell now stands. Together, they donated about $3,500 worth of materials and work to erect the bell, Weber said.

A sign coated with waterproof plastic will be mounted on a metal pole and installed next to the bell Saturday so people walking by can read about its history. On Sunday at 11 a.m., the church will have its regular service followed by a bell dedication and meal.

Green credits serendipity with the arrival of the bell at his church. If he had not worked for Hospice of South Texas, he likely would never have met volunteer Monroe Rieger who, along with his wife, steered the bell in his direction.

“It means a lot that they thought enough of us to guard the legacy of the bell and its history — to preserve it,” Green said. “The bell is a sign of holiness to the Lord.”

WHAT: Church service followed by dedication of the A.C. Bell and a meal