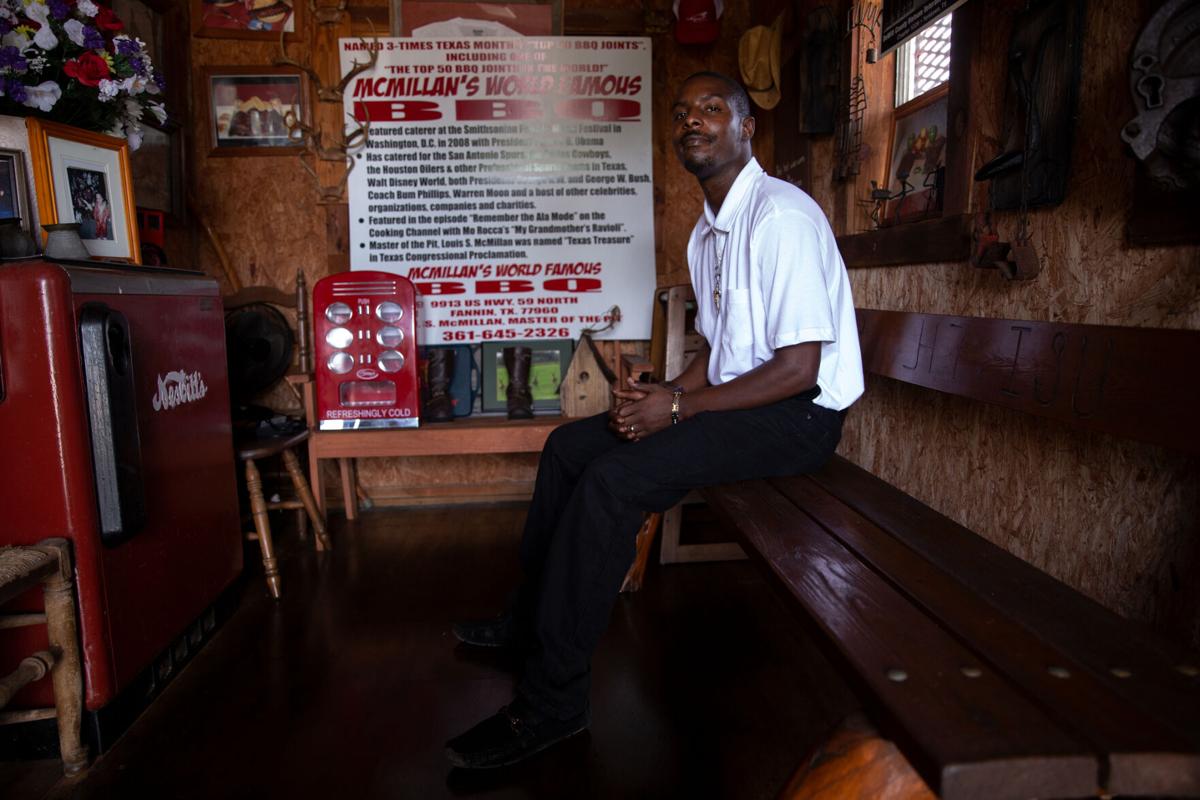 Johnny Smith sits for a portrait in the entrance room of McMillan’s Bar-B-Q on Saturday, July 18, in Fannin. Smith is a pitmaster-in-training at McMmillan’s. 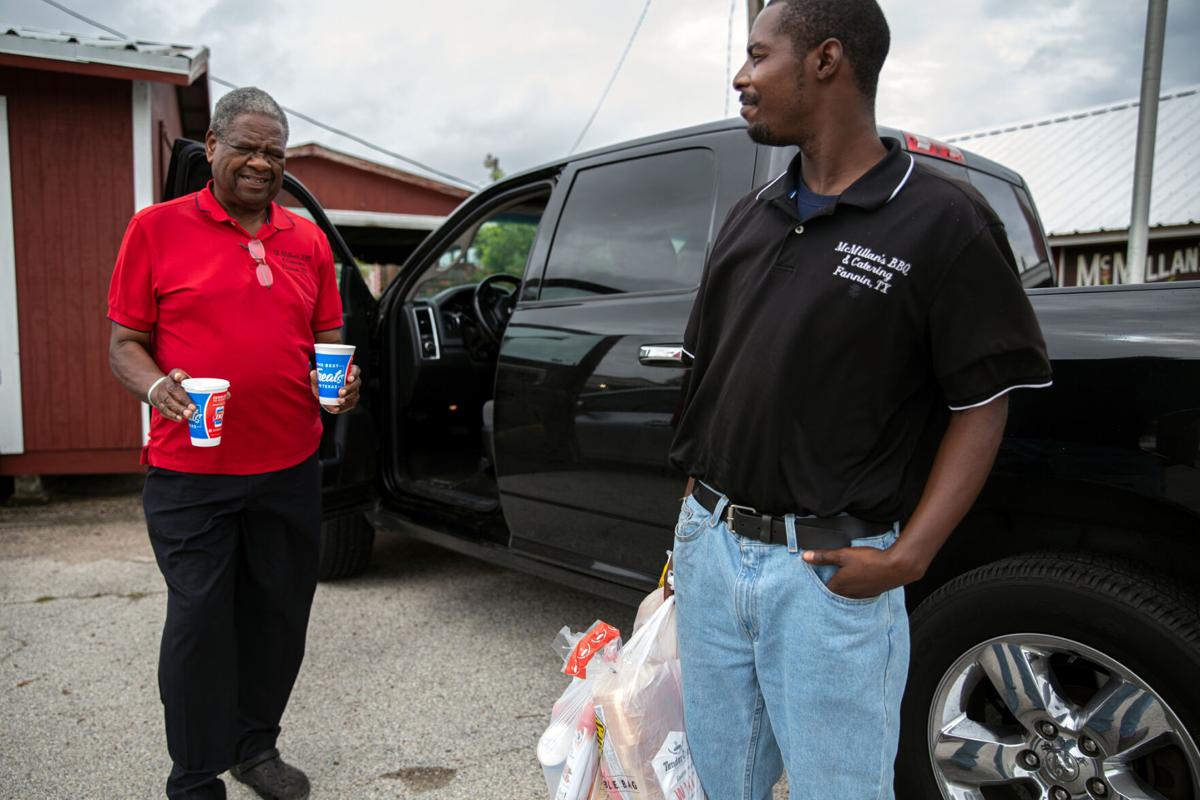 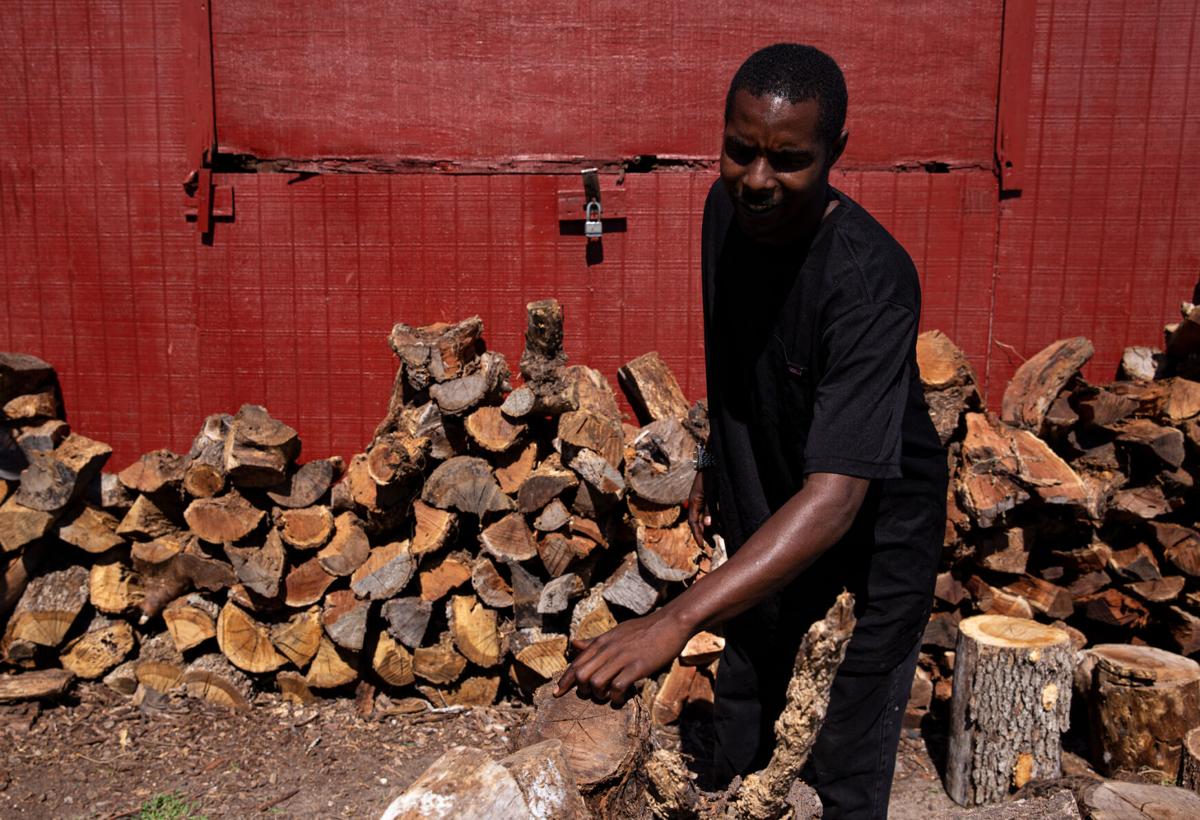 Johnny Smith goes to a side of the building to pick up some wood to add to the fire on Saturday, June 13, at McMillan’s Bar-B-Q in Fannin. Smith said the restaurant uses oak, mesquite and pecan wood. 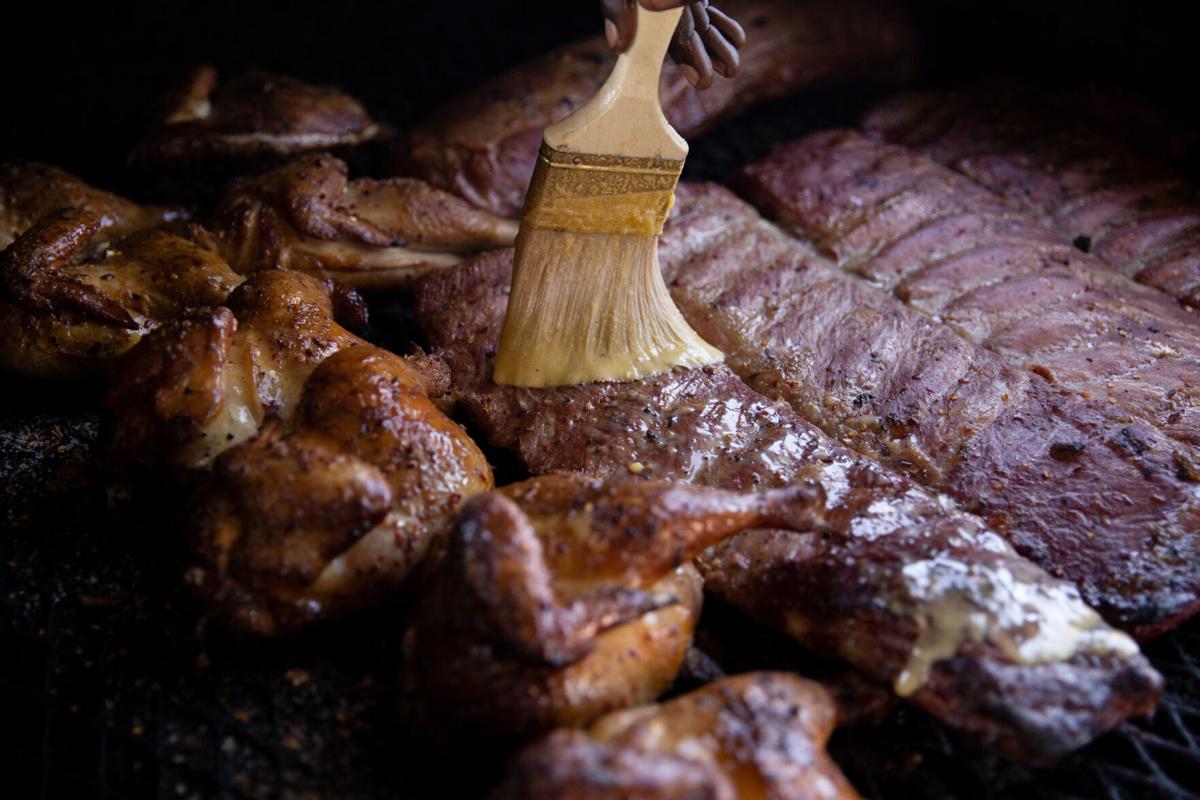 Johnny Smith brushes a rack of ribs with a coat of mop, a sauce that adds moisture to the meat as it cooks on Saturday, June 13, at McMillan’s Bar-B-Q in Fannin. 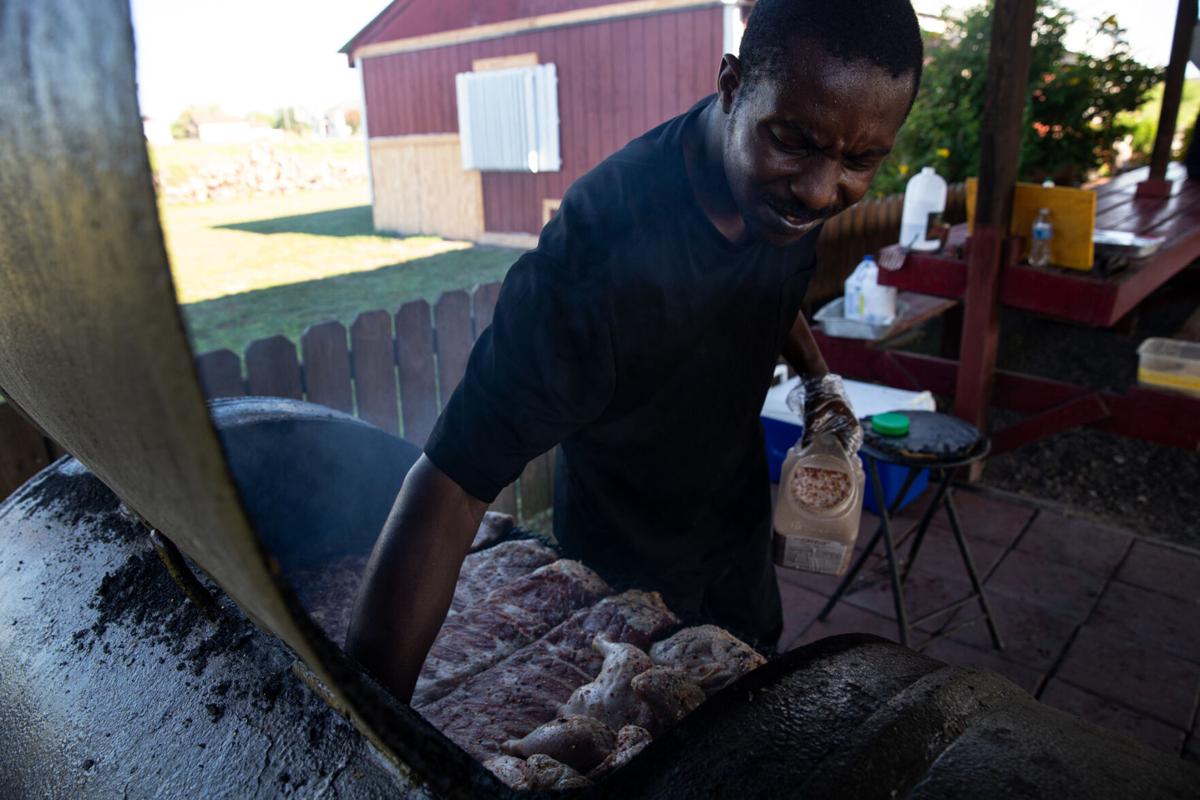 Johnny Smith puts on a rub mixed of kosher salt, granulated garlic and crushed red pepper to the meats on Saturday, June 13, at McMillan’s Bar-B-Q in Fannin. 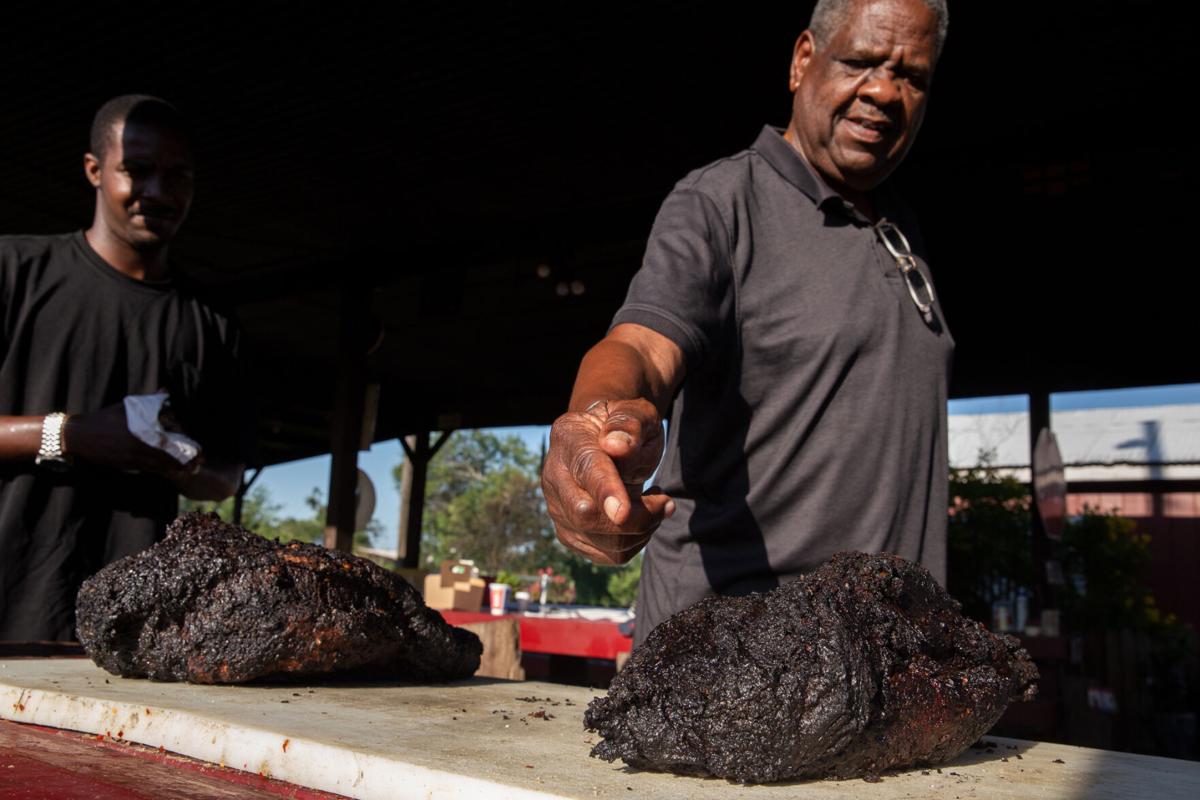 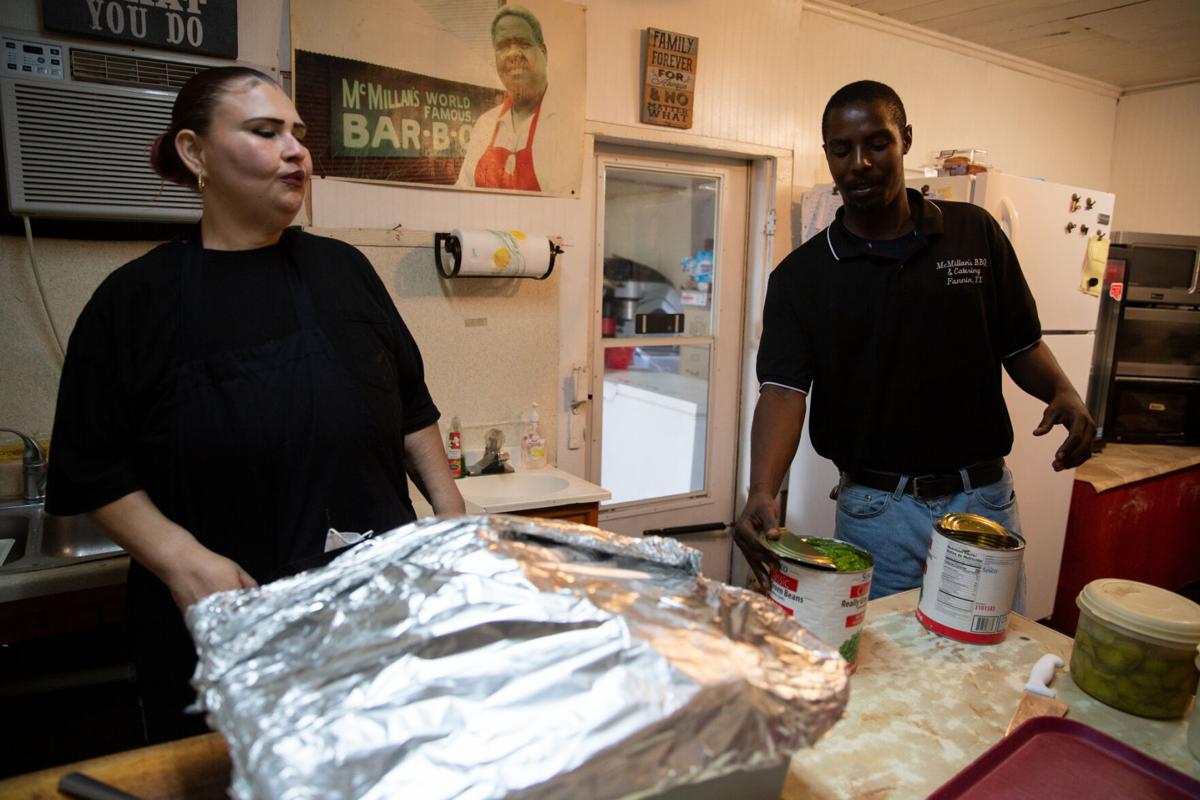 Johnny Smith, right, works with his fiancé Stacey Quintero, left, to make sides inside the kitchen of McMillan's Bar-B-Q on Saturday, July 25, in Fannin. 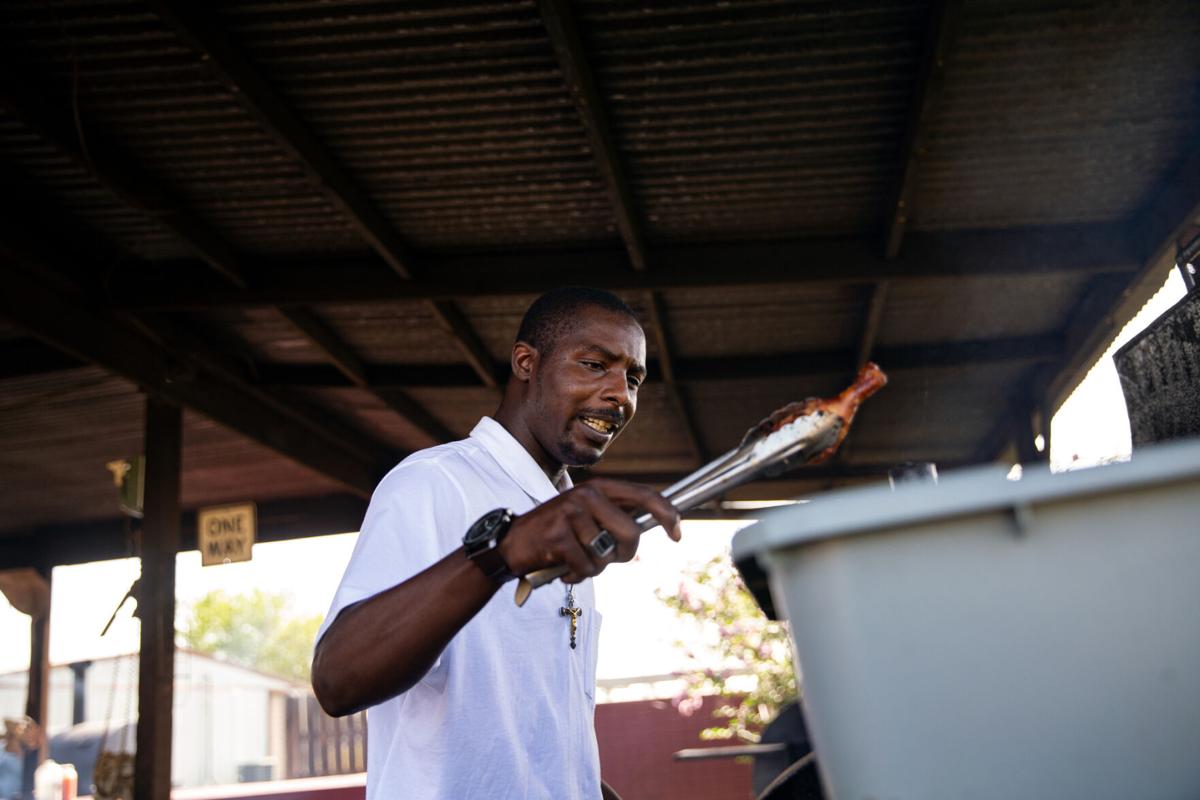 Johnny Smith takes out a finished piece of chicken from the pit on Saturday, July 18, at McMillan’s Bar-B-Q in Fannin. 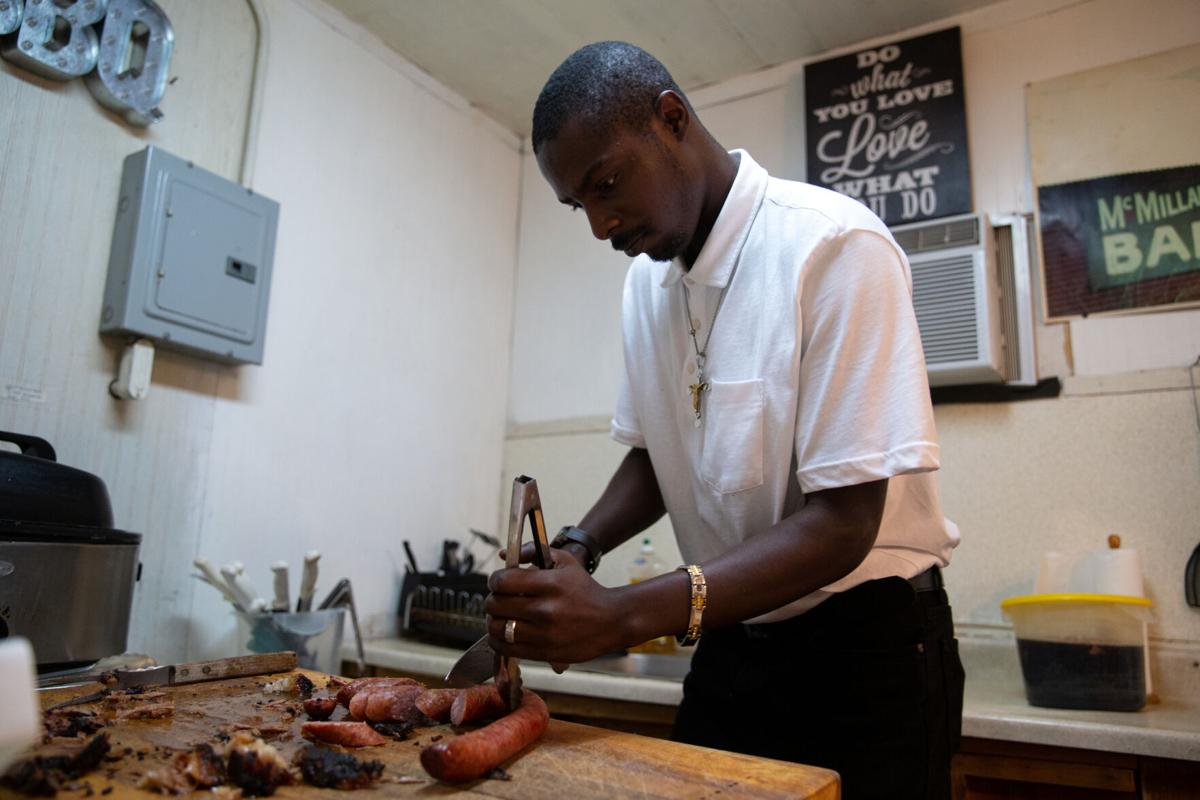 Johnny Smith slices up a link of sausage into pieces for a customer's order on Saturday, July 18, at McMillan's Bar-B-Q in Fannin. 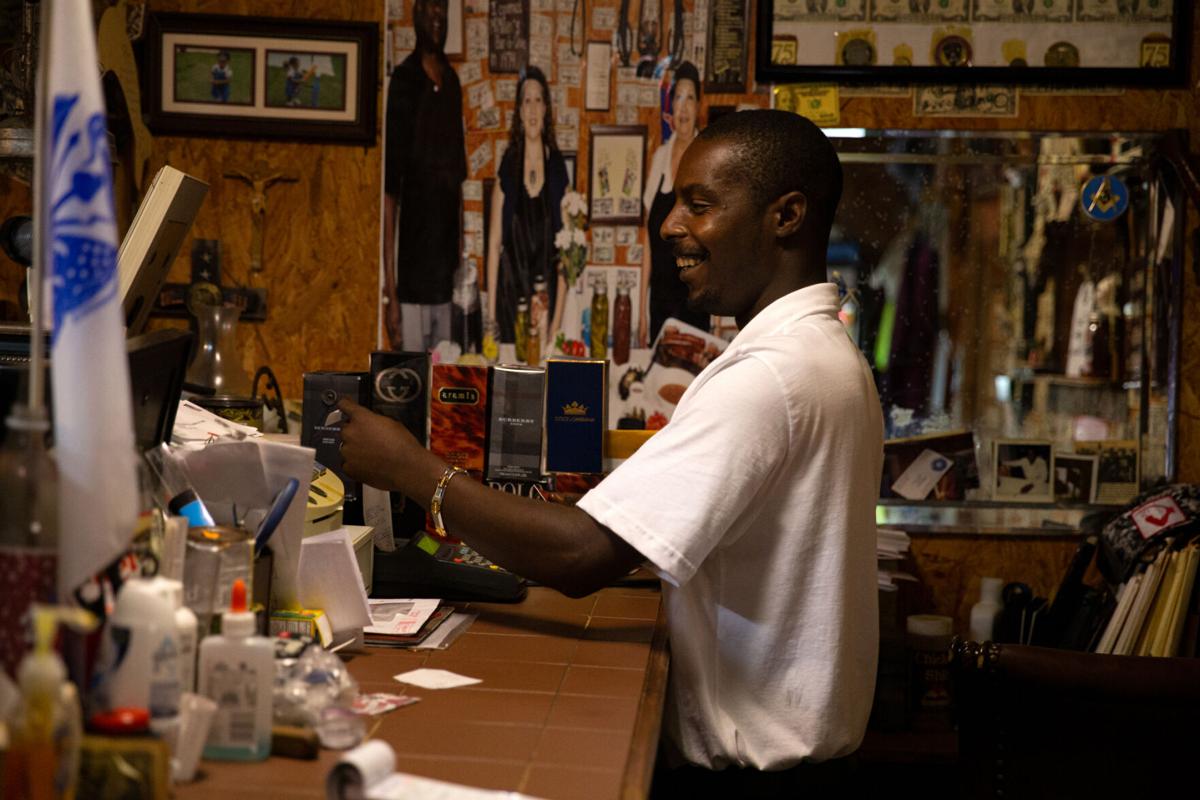 Johnny Smith smiles as he rings up a customer on Saturday, July 18, at McMillan's Bar-B-Q in Fannin. 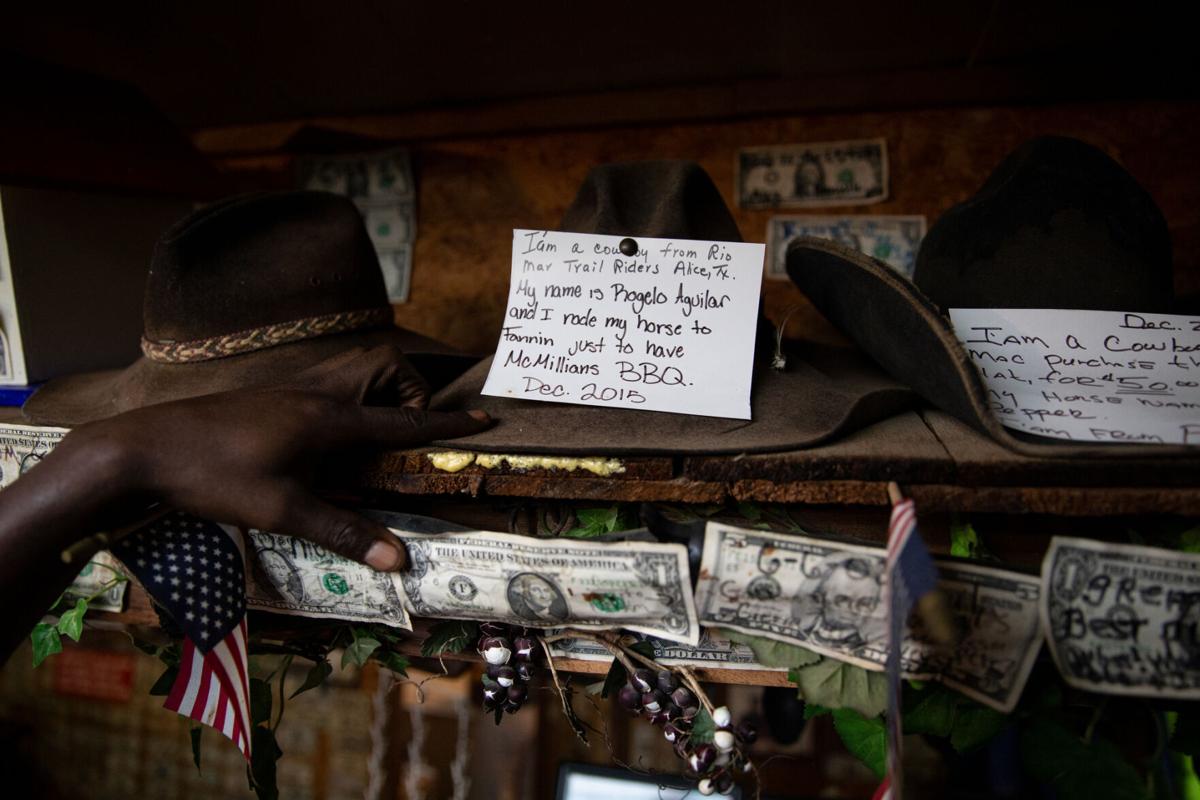 Johnny Smith points to several cowboy hats on a shelf on Saturday, June 13, at McMillan's Bar-B-Q in Fannin. Smith said the hats were purchased by Louis McMillan from the customer and then displayed. 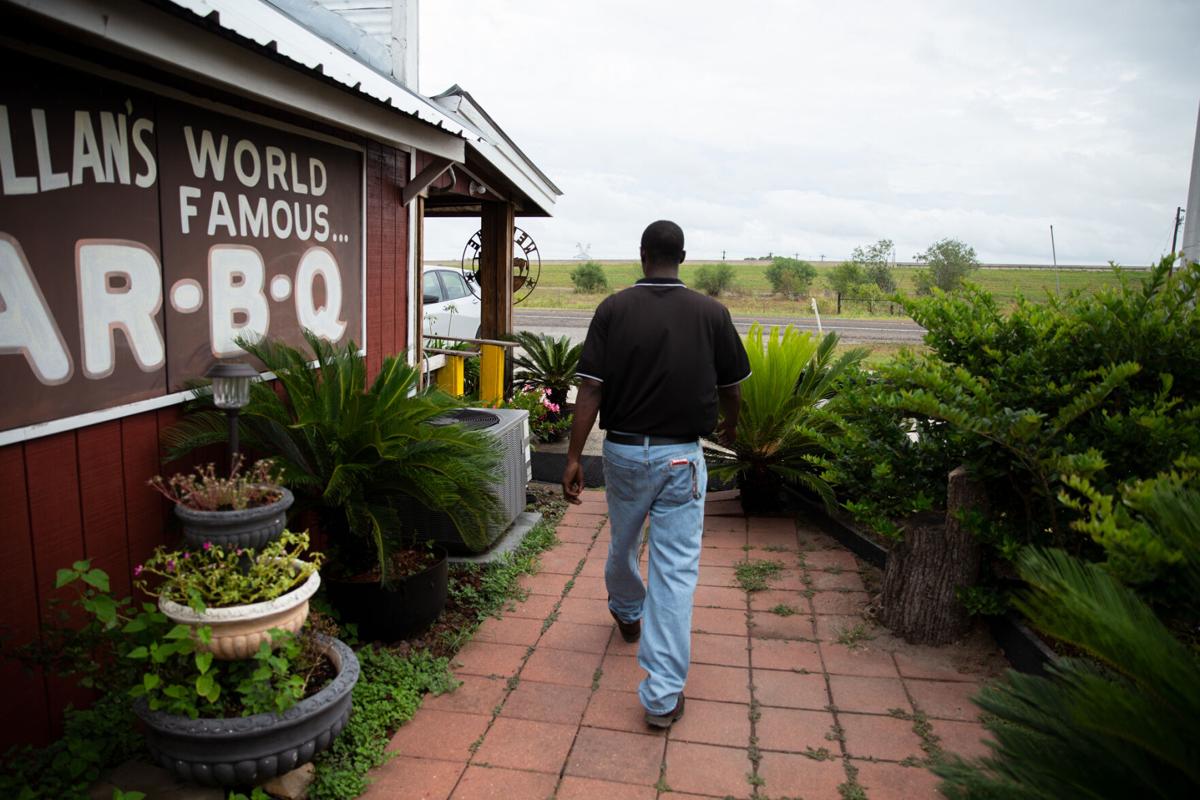 Johnny Smith walks toward the front of the restaurant for a brief break on Saturday, July 25, at McMillan’s Bar-B-Q in Fannin.

FANNIN — On his second day of work, Johnny Smith cooked 180 steaks, along with brisket, chicken and sausage, all at the same time.

Five years later, Smith, a pitmaster-in-training, is now in the running to take over the legacy of Louis McMillan, owner of McMillan’s Bar-B-Q whose career in the business has spanned nearly 50 years.

At the age of 74, McMillan still goes to his barbecue restaurant every single day, working with his apprentices and reviewing customers’ orders. In his free time, he sits on a bench holding a whip, swaying it back and forth making lines in the gravel as the smell of burning oak, mesquite and pecan wood engulfs him.

He remembers everything about his customers, down to the meat they ordered months ago.

Over the years, McMillan has been featured on TV shows, won numerous awards including Top 50 BBQ Joints in the World by Texas Monthly in 2013 and catered the Smithsonian’s Folklife Festival in 2008 on the National Mall in Washington, D.C.

In 2008, McMillan started a pitmaster class where students could learn the craft of barbecue over the course of nine months. The course comes with a hefty price tag of $50,000 per student and only a handful of people have received McMillan’s Master of the Pit stamp of approval.

McMillan said when he first met Johnny Smith, of San Antonio, some problems stood in the way such as Smith constantly challenging him on tasks and his inability to listen. But despite the rough start the two had, McMillan said he saw something in Smith and allowed him to become his student.

“He didn’t have the cash to pay me,” McMillan said. “But I saw a need that for this young man to go anywhere, he needs to learn the craft.”

Smith currently works from Monday to Friday in a warehouse for H-E-B but every Friday, the 29-year-old makes the two-hour drive to Goliad to work for McMillan where he stays with his fiancé Stacey Quintero and her mother Josie Quintero, who is the manager at McMillan’s Bar-B-Q.

Smith never knew his own father. He was shot and killed by his uncle during a dispute when he was just 3 months old.

“All I could do was cry,” Smith said. “That’s all I could remember was crying the whole day.”

Smith had never worked at a restaurant before coming to work for McMillan. As a teenager, he said he worked odd jobs for money and had a dream of becoming a professional basketball player.

“But as I was growing up, I made some bad decisions,” Smith said. “So one bad decision led to another and I’m like ‘Oh man, I’m done.’”

“I took Johnny under my wings when he came here,” McMillan said. “But I knew I had to get the street ideas out of his mind. He just needed a hand — someone to reach out and give him that discipline, that understanding.”

As a veteran who served in Vietnam, McMillan approaches his class with a strict sense of discipline and rigor, teaching Smith about the virtue of hard work.

But out of all the rules, McMillan said he has one that stands above the rest: love what you do, and do what you love.

Smith said he recalls being frustrated and getting into arguments with McMillan when he first started working for him because he was not used to having a male figure in his life telling him what to do.

“With me not having a father, it’s kind of weird because I’m a grown man but I got another dude over here, he’s just trying to look after me,” Smith said. “So that’s what changed me, that’s the reason I come to work: I come to barbecue, but I come here to make sure (McMillan) is doing all right.”

After working on the pits for two years, Smith said his relationship with McMillan really began to take shape. He said he was sitting on his sofa at home one night when he realized he had a true passion for barbecue.

Though every day of work is different, a few things remain the same: Smith arriving to work at 5 a.m. to fire up the pits and looking out into the darkness with the smoke around him while thinking about how his life has changed, he said.

Now, working several meats on different pits comes second nature and for the first time in his life, Smith has not one, but three bank accounts after McMillan encouraged him to open one up.

“He’s shown me the way of life, showing me what work really is,” Smith said. “Life is like a book, you write your own book.”

I was born in Vietnam and left to settle in the United States at the age of four. A Texan by heart — I lived in Arlington for nearly two decades and graduated from The University of Texas at Arlington with a degree in journalism.

I've been eating BBQ cooked by Louis McMillan for more years than I can remember. Mostly we stop during deer season when we are headed south. Other times we'll be in Victoria and say..."hey let's go eat BBQ with Louis.

I don't think that I have met Johnny but then we are usually traveling during the week but he sure seems to be on the right track and he certainly has the best mentor that he could find.