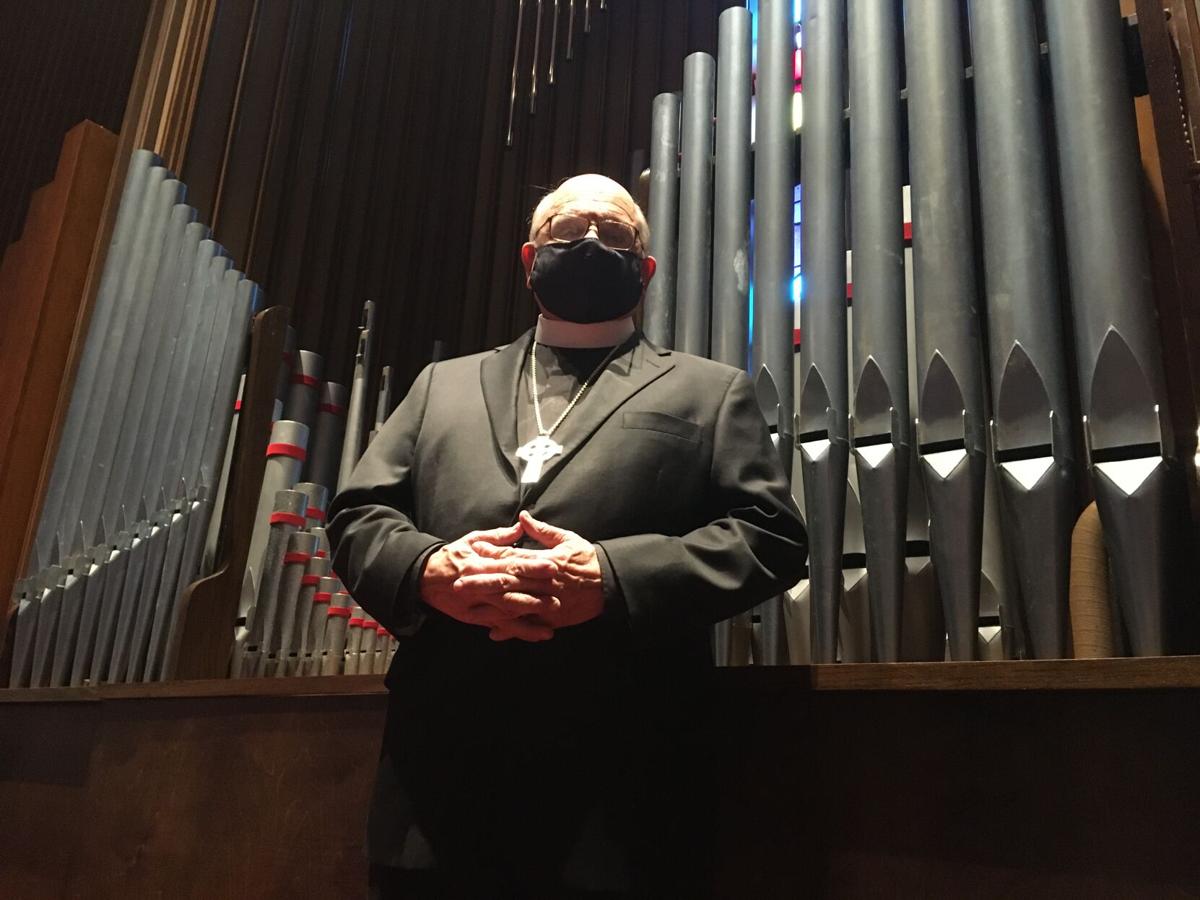 Pastor Jim DeMent of First Presbyterian Church poses for a portrait in front of the organ. The church celebrated its 175th anniversary in 2016. 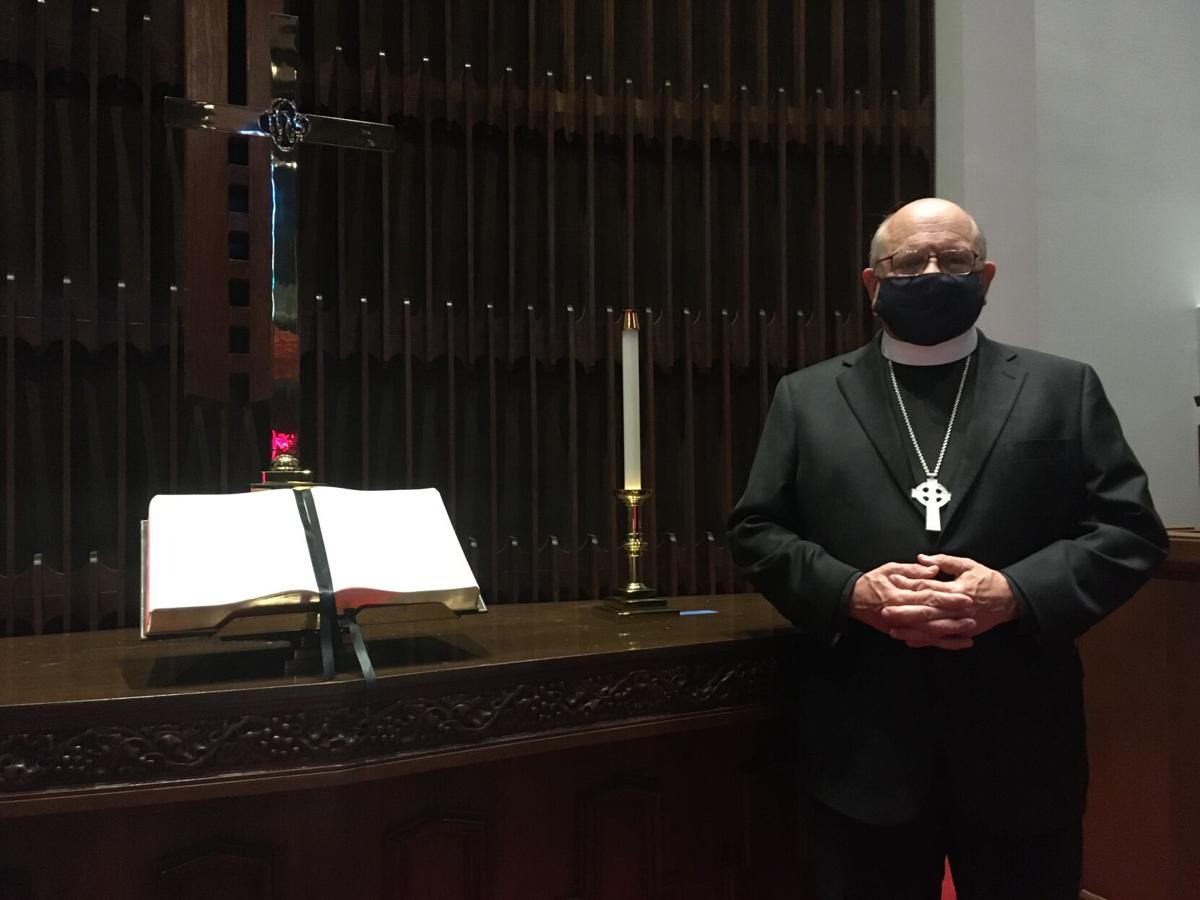 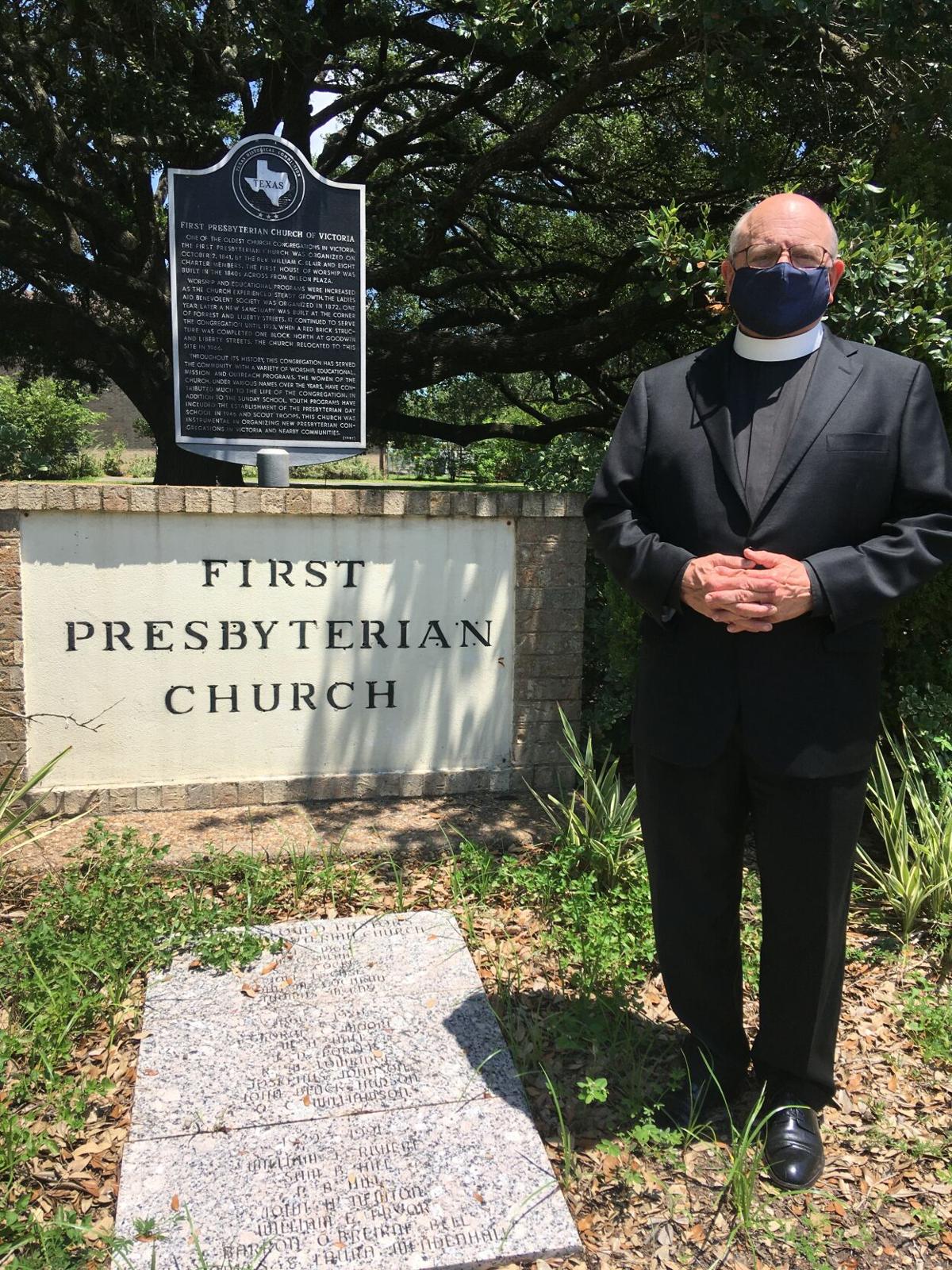 Pastor Jim DeMent of First Presbyterian Church stands next to a historical marker. The church is one of the oldest Presbyterian churches in the state. 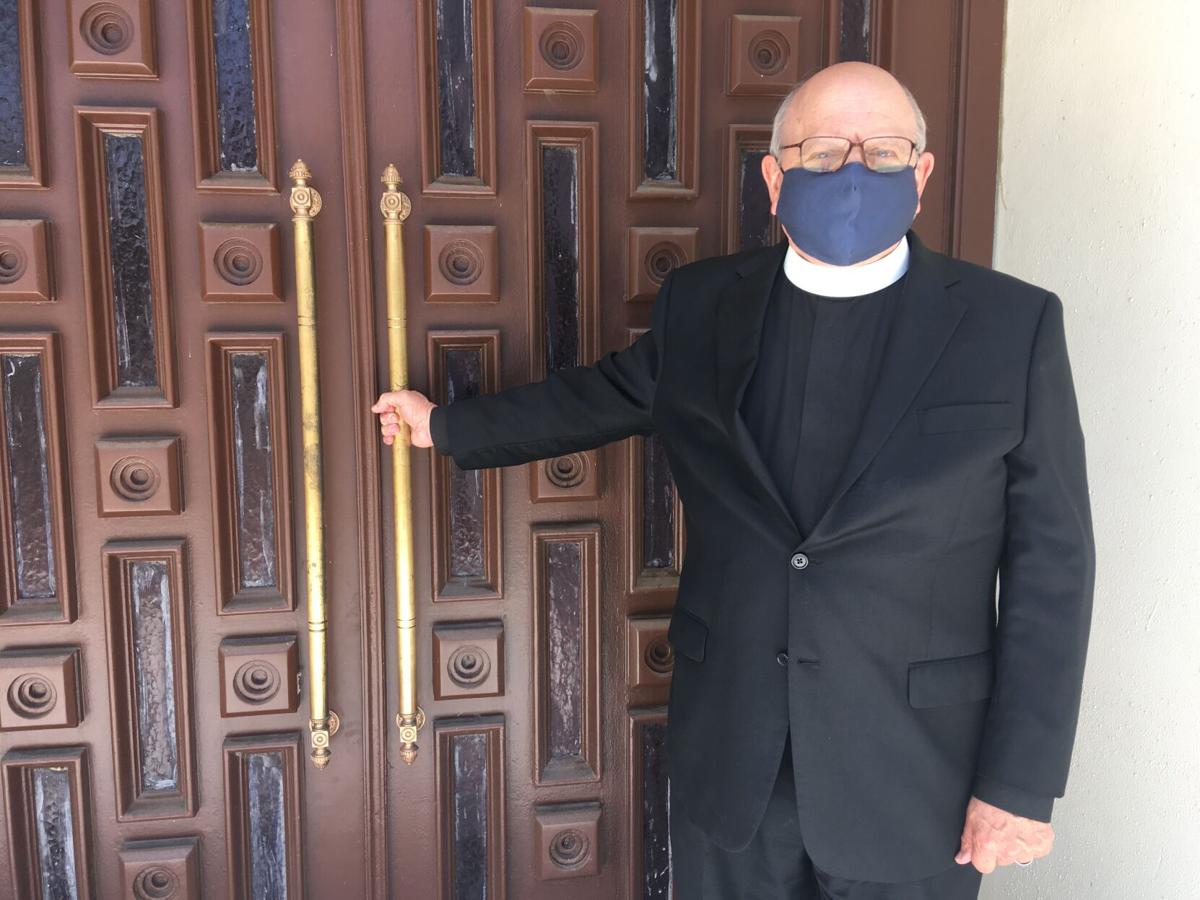 Pastor Jim DeMent of First Presbyterian Church has lead his congregation through rebuilding after Hurricane Harvey and now the pandemic.

Pastor Jim DeMent of First Presbyterian Church poses for a portrait in front of the organ. The church celebrated its 175th anniversary in 2016.

Pastor Jim DeMent of First Presbyterian Church stands next to a historical marker. The church is one of the oldest Presbyterian churches in the state.

Pastor Jim DeMent of First Presbyterian Church has lead his congregation through rebuilding after Hurricane Harvey and now the pandemic.

First Presbyterian Church was organized on Oct. 2, 1841, a time when Victoria had fewer than 1,500 residents and the Republic of Texas had a population of about 70,000, according to a booklet published by the church on its 175th anniversary in 2016.

The church bell was cast in 1853 by J. Bernhard in Philadelphia, Pa., and some of the present pulpit furniture has been used for more than 130 years. It’s the fifth oldest Presbyterian church in Texas.

“Honestly, in our DNA is a strong connection to Victoria. We feel a part of and invested in the community,” said Jim DeMent, pastor of First Presbyterian Church. “We don’t take pride in longevity alone, but we experience a great deal of satisfaction in being part of the community for over 175 years.”

DeMent continued that the church does not rest on its long history because it’s not a museum, though it does possess museum-quality articles such as the stained glass windows from previous church locations.

“We don’t just focus on ourselves but try to focus outward to see how we can help be part of the continuation of the community that is Victoria, which we can trace in our history, DNA and traditions,” he said. “As vital as Victoria has been since its inception, we seek to be vital as well.”

For example, on Tuesdays, many members of the church already volunteer at Christ’s Kitchen.

“Lord, when did we see you hungry and feed you? When did we see you naked and clothe you?” DeMent asked. “Feeding the homeless and destitute – it doesn’t get any more Christian than that, though it’s not unique to Christians. It’s one way to manifest faith.”

First Presbyterian Church was DeMent’s first call out of the seminary. He retired in 2014 from a career in international law and moved to Victoria to assume his role at the church in 2018. He earned his master’s in divinity from Austin Presbyterian Theological Seminary.

“I have to say that what I have enjoyed most is the people that I have met, and not just members of this congregation, although that has been special. I have enjoyed by and large living in the Victoria community with good people, friendly people, gracious people. So coming out of a highly competitive, high-pressure career and Houston, and coming to live in a community where people live their faith, who embody their faith in their character and their behavior, has been inspiring.”

DeMent said he is humbled that his congregation welcomed him as a minister in charge of leading worship and pastoral care.

“They entrusted the church to me and I think it‘s a great leap of faith on their part to let someone who has never been a minister before come and minister to them,” he said. “It’s an awesome responsibility.”

Martha Tarkington, a member of the church, said DeMent arrived during a time when the church was suffering from damage after Hurricane Harvey.

“Our sanctuary roof had been severely damaged and he brought cohesiveness and determination that we were going to be able to bring everything together and repair our church and be able to express our faith and worship again in the sanctuary,” Tarkington said.

Jack Kleinecke, clerk of the session for the church, called DeMent a godsend.

“He came to us during some pretty tough times with his experience as a corporate lawyer. He brought so much experience from the business world that we would need to guide us through the reconstruction of the church because we had a huge battle on our hands with the insurance company. With his legal training, counsel and advice, he teamed up with people in the congregation,” Kleinecke said. “He was the perfect person at the perfect time for our church. It’s been a wonderful marriage between our church and the Reverend DeMent. He’s a great leader, and it’s easy for him to convey to other people confidence so they can relax and know we will get through things. You trust him. He’s a fine man.”

The church sustained damages in excess of $1 million during Hurricane Harvey. About seven members of the congregation formed a Hurricane Harvey task force with DeMent and brought construction, financial and legal backgrounds to the table. One longtime member brought the institutional memory.

They all contributed enormous amounts of time and professional resources to the restoration of the church.

“We believe the restoration of our premises was an expression of our faith and our hope in the future, not just repairing bricks and mortar, but affirming our faith in worship, our faith in God, and to have something beyond this tragedy,” DeMent said. “The task force was blessed with a considerable amount of talent and resources channeled into the rebuilding of our church in obedience to our faith.”

Just as the congregation could once again worship in the sanctuary, COVID-19 hit. DeMent broadcasts the Presbyterian services “from prelude to postlude” live on Facebook and posts them on the church’s revamped website afterward.

“This surprised me most as a new preacher. The farthest thing from my mind was having to preach over the Internet and worship without a congregation in front of me,” DeMent said. “That has really surprised me and required some adjustment. Preaching in front of an iPhone was not in my knapsack when I arrived. We’re keeping the church alive outside the building. That’s what we’re working through — learning how to do.”

The sermon is the centerpiece of the Presbyterian service along with the ministries of music and liturgy. Composing sermons is one of the most important things a minister can do, DeMent said.

DeMent looks at the lectionary, a prescribed selection of scripture readings, for his upcoming sermons. On Mondays, he chooses the scripture he wants to preach on and studies and researches it most of the day.

“I study biblical commentaries, annotations and historical sources,” he said. “It’s no accident that pastors’ studies are generally full of books. As I research, a theme emerges, something I feel called to preach about, some point I want to make.”

On Tuesdays, DeMent begins the process of writing.

“When I write, I close my doors and tell the office manager it’s ‘Sermon Tuesday,’” he said. “It means I’m closing the door to write the sermon and they won’t see me for a while.”

He spends Thursday and Friday editing, revising and rewriting the sermon.

“In many traditions, the preacher will deliver his or her sermon extemporaneously. They just pick a verse and start preaching on it as they are moved by the Holy Spirit,” he said. “In contrast to that, I have researched and prepared and I know precisely what I’m going to say before I step up to the pulpit.”

DeMent said his congregation, nourished and invigorated by the church service, can then go out into the community to serve.

“I would like to do whatever I could to empower the church to do more of that. I would like this church to be even better positioned and empowered to go into the community and serve,” he said.

On an afternoon drive in the car with his wife, Sally, Jim DeMent Jr. considered the next phase of life.

Have you been out more to restaurants since Gov. Abbott allowed a greater capacity?